Václav Havel’s “Letters to Olga” as a COVID-19 companion

For today's anniversary of Václav Havel's death, Kieran Williams makes the case for why Havel's prison letters are timely reading in our pandemic. -promoted by Laura Belin

In the course of this year I have read a lot about COVID-19, its effects on the human body, and what we might do to treat or halt it. I don’t yet feel ready to read about its other effects, on the psyches of billions of people who have had to adjust their daily lives. The fact is that until it is over, I won’t even understand how it has affected me, let alone everyone else.

That’s why I’ve wanted to turn instead to a record of another person’s experience of existential shock, one that happened far enough in the past that we can treat it as a completed event: Václav Havel’s letters as a political prisoner 40 years ago in communist Czechoslovakia, published as Letters to Olga. 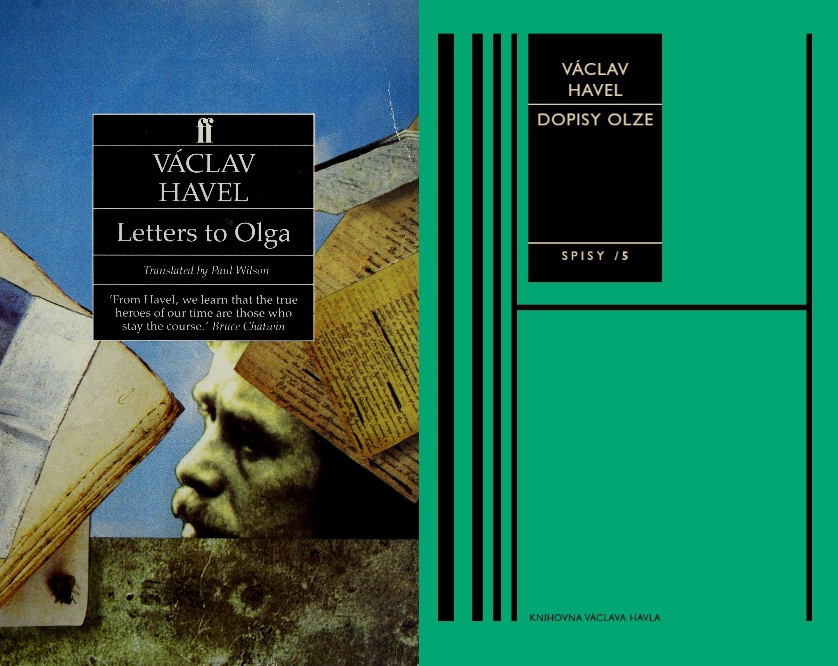 The alchemical magic of Havel’s writing is that it has continued to take on new meaning since his death on this day in 2011. For example, I came to see his last play, published in 2007, in a whole new light after the 2016 and 2020 US elections. The prison letters written in 1979–1983 likewise gain a new purchase: previously the ones that received the most attention were letters 129–144 with their profound meditations and call for “existential revolution," but now the whole set speaks to us as a chronicle of a man’s struggle with 193 weeks of confinement.

Locked up / locked down

Obviously, there is a big difference between being locked up and being locked down, in that the former entails far more regimentation of time and space. In Havel’s case, it involved compulsory manual labor, some of it very grueling.

Being locked down, by contrast, still allows potentially great freedom of inquiry, expression and communication, depending on personal and political circumstances; if anything, the problem may be a lack of physical exertion. (Havel, however, also worried that he was eating too much in prison and getting fat.) But being locked down may bring its own restrictions: Havel in prison could see his wife Olga and brother Ivan for an hour every three months, while some loved ones during a pandemic may have to go much longer without direct contact.

These differences notwithstanding, a reader of Havel’s letters today will be able to relate to their tone and content in a way a reader in December 2019 would not have. Taken together, the 165 letters constitute a phenomenology of being thrown into a scary new world, and document a search for the words to describe it.

Care of the self

Many readers will recognize themselves in Havel oscillating between trying to make the most of his captivity as an opportunity for self-improvement, and a resigned acceptance that it is not going to happen.

Havel at first welcomed his conviction for “subversion of the republic” as respite from the frenetic life of a famous dissident, and from the mess he had made of his marriage. The first letters are full of ambitious plans to read lots of books, master foreign languages, and write a new full-length play.

After arriving at the prison near Ostrava where he would serve the first stint of his four-year sentence, he soon realized that he would have neither the time nor the inclination. Like someone trying to work from home with small children, or trapped with an abusive partner or parent, Havel could not achieve the peace of mind his projects needed. (A sense of the communal quarters can be gleaned from this production of his short play “Mistake”, filmed in the Plzeň-Bory prison where he served the second leg of his sentence.)

Instead, he often battled the sloth, brain fog and malaise that covid readers will readily recognize. Letter 68, from February 1981, captures this “foul mood” (blbá nálada), using the image of a train knocked off its tracks that recurs several times in his prison notes:

I am simply unfocused, distracted and nervous, I am always cold, have a slight headache, am slightly chilled, my eyes water, I am somewhat tired, drowsy and weak (but I have no immediate reason at all to be tired and I am well-rested), everything aches a bit (but not such that I could consider it a specific illness), I am just generally derailed (vykolejený), I get nothing done, I don’t stick to anything and I don’t enjoy anything, I can’t express myself properly or make decisions, I think slowly, my hands tremble slightly, I sort of look “through” people and things that I see but do not perceive adequately; I feel hollow and dull; everything about me somehow falters (including my voice) — in short, I am not “in my own skin”.

There followed a methodical cataloguing of his sentiments, such as the melancholy brought on by watching television or a film and seeing people living normally, and letter 72 describes his “Sunday blues." In letter 96 he confronted the temptation to be selfish, indifferent, and care only for oneself and not for the world because it is irredeemable.

At other moments, he desperately wanted to tune into that world, while tuning out the noisy cellmates around him.

Many of his letters, especially ones abridged or omitted from the published collection, gave Olga detailed directions on the upkeep of their farmhouse, nagged her to swap their Prague apartment for one more to his liking, and pleaded for information, no matter how trivial, that could connect him virtually to the home (domov) that was essential to his sense of self.

Havel’s predicament reminds us that we can have the technical means to communicate with others, but that does not necessarily mean we are in dialogue.

Olga at first did not want or did not know how to write the kinds of letters Havel wanted to receive, and he complained that he felt like he was speaking to her in a kind of soliloquy, rather like Zooming with someone who insists on keeping their camera off. In letter 130 he describes his ardent sympathy for a TV meteorologist muted by the failure of the sound system in her studio.

To cope with his surroundings, Havel adopted regimens of self-care, relying either on practices from life before prison (such as yoga and vitamins) or new rituals such as preparing a cup of tea. Never a tea-drinker previously, now he appreciated it as one of the few things he was allowed to do for himself, a symbol of the little autonomy and control he retained. Rather than perfect his knowledge of English and German, he found satisfaction in darning a sock and doing self-surgery on an abscessed tooth.

Care of the soul

Another reason why Havel at first seemed to welcome his prison sentence was that it would be a chance to put his soul in order.

Letters to Olga is about Havel dealing with incarceration, but it’s also about a man in his forties coming to terms with middle age, gaining a certain perspective on the span of his life up to that point, on lost youth and lost mojo, on friends lost to death or other departures (about whom he dreamed vividly), on what life might still offer in terms of accomplishment, discovery and new beginnings.

It is a reflection on an identity over time, and “identity” was the core theme of all of Havel’s writing, especially his plays. In an age that rewards mendacity and opportunism, the greatest ethical challenges are to maintain a thread of continuity and take responsibility for one’s words and deeds all along the way. With the added stresses of prison life, Havel concluded that his captivity should be taken as a test of the resilience we all need to evince in order to inscribe our stories indelibly on the “panorama of Being” (letter 62).

Striving but failing to achieve Stoic equanimity amidst the din of crowded cells, to be hopeful while not optimistic, Havel concluded in letter 82 — the midpoint in the cycle — that it would be enough just to leave prison more or less the same person he had been when he entered it, flaws and all.

Fantasies and fears of freedom

The duration of a pandemic is hard to predict, subject as it is to many variables. A prison sentence is ostensibly finite, and Havel assumed he would be released on November 29, 1983. This meant that he had a foreseeable date of return to “normalcy." While he naturally longed for that date to come, and fantasized about what he wanted to do in his first days and weeks at liberty, he also had forebodings that a return to freedom can incur its own psychic shocks.

Starting in letters 152 and 153 from autumn 1982 (not in the published collection), Havel began to sketch out a plan for a controlled reentry into society, and warned Olga (and the many people she showed Havel’s letters to) to be ready to get reacquainted with his many foibles. He wanted it to be a very slow, cocooned “incubation." Although he was finding prison life more, not less, arduous with each year, he turned down an offer of early release if he begged for clemency. He did not want to give the regime material to use against him, but I suspect he also did not want to leave confinement sooner and faster than planned, as he said (in letter 124) freedom could cause its own kind of derailment.

As fate would have it, a virus thrust Havel back into the world. After struggling with a Christmas depression, on January 23, 1983 he was struck by an overpowering flu-like illness. His temperature soaring and his whole body aching, he developed pneumonia and struggled to breathe. He was transferred to the medical wing of Pankrác prison in Prague, and put on antibiotics. His condition improved, but the authorities did not want to risk another life-threatening episode while Havel was in their custody. He was paroled on February 7, 1983 and sent to convalesce in a civilian hospital.

The following months were, as Havel had anticipated, very tough going. He found it no easier to write in Prague or at his farmhouse than it had been in prison. He had become an international cause célèbre, but that only brought even more demands on his time, requests for the interviews and statements that had already been diverting him from his art in the 1970s.

It was not until a year after his release, after self-isolating for a week at the Hotel Růže in Český Krumlov, that he could produce something of lasting value: the essay “Politics and Conscience,” perhaps his finest commentary on modern life and every bit as worth reading today as the more famous “Power of the Powerless." But it could be argued that Havel never truly recovered, physically or emotionally, from his captivity.

No summary of any length can do justice to the searing self-examination of a man’s psyche over almost four years; what I offer here is just an appeal — in the spirit of Havel’s writing — to attempt your own immersion in Letters to Olga at this particular time in history. It can’t be read in a rush, and while it is a spiritual book, there is no key to life to be found in it. Havel offers no cheap advice, no gimmicks, no easy answers; he is unsentimentally frank about how hard it is to be confined, but also to return to the stressful and often distressing lives we lived before confinement. But that makes him the right companion to look for meaning in it all.

Besides being married to Laura Belin, Kieran Williams is the author of Václav Havel (2016) and co-editor with David Danaher of a forthcoming collection of essays on Havel from Karolinum Press that includes chapters on the topics of prison, home, responsibility, and appeal.

This essay first appeared on Medium.