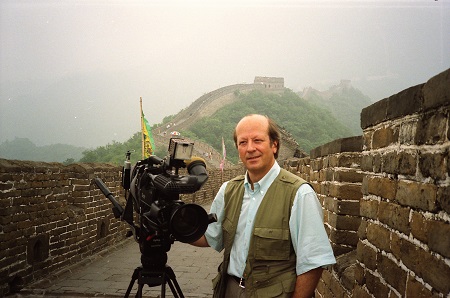 Herb Strentz reached out to longtime television reporter Fabrice Moussus for perspective on some of President Donald Trump's most heinous pardons. -promoted by Laura Belin

“You wake up one morning and the tanks are at every corner.”

That’s the closing line in an email I received from a retired television newsman you don’t know. However, it’s almost a certainty you have seen his video coverage of terrorism, warfare, and other aspects of life and death on television over the past 30 or 40 years.

Fabrice Moussus — in this post, he is Bleeding Heartland’s foreign correspondent in Paris —  is a delightful, self-effacing Frenchman. He’s retired now but he had put his life on the line to help tell people around the world what was going on in Iraq, Iran, Egypt and lots of other places.

We had become acquainted when he came to the University of North Dakota as a journalism student, 1971-73, and I was the department chair there.

That was a couple of years before our family came to Drake University’s journalism school and eight years before Fabrice was the only TV news person to film the 1981 assassination of Egyptian Premier Anwar Sadat in Cairo —squaring off for a few seconds with his video lens vs. the barrel of a terrorist’s automatic weapon. In his video work in the Middle East, Fabrice became a kind of go-to-person for such prominent U.S. news types like Peter Jennings, Ted Koppel, Diane Sawyer and Barbara Walters when they reported from Iran, Iraq, or elsewhere in the Middle East.

Because we’ve kept in touch, it made sense to get his views on President Trump’s pardon of the four Blackwater mercenaries convicted of murder and manslaughter in the killing of seventeen Iraqi civilians in Baghdad. And why not also on the “yellow jacket” riots in Paris, and our U.S. concerns with current and anticipated domestic terrorism?

Our recent email exchanges were prompted by Trump’s Blackwater pardons and a CNN article by Tom O’Connor, a now retired FBI agent who was outraged by the pardon. O’Connor had led the evidence-gathering team that investigated the September 2007 Baghdad carnage, an investigation central to the convictions. For details, look at his 2,400-word account of the killings.

A subsequent Associated Press article featured one of those pardoned, Evan Liberty, who claimed, “I didn’t shoot at anybody that wasn’t shooting at me.”

That quote rang a bell because O’Connor’s finding is that no evidence indicates the Blackwater team was ever shot at.

What the Blackwater team may have perceived as firing upon them was in fact fragments from a grenade they had fired that ricocheted and came back to hit one of their vehicles. To top it off, in anticipation of possible trouble, the Blackwater men had requested permission to go to what became the scene of the atrocity. They were denied permission, but violated the order and went anyway. Seventeen Iraqis were killed.

Yet Trump issued his pardons.

Fabrice offers some context for this madness:

I know it sounds like a cliché but strange places attract strange people.

In 2002, when I was in Kabul,[Afghanistan] I saw mercenaries working for companies like Blackwater who had been hired to protect international companies based in Kabul. The U.S. networks hired them as well because their insurance companies demanded it. As a result, there were always armed mercenaries hanging around the U.S. television networks’ compounds or private houses which we lived in [...]

We cooked our own meals and around the dinner table, there was always a group of journalists, translators, drivers and ‘fixers,’ meaning local field producers. Among them were also at times guys with weapons and pseudo army fatigues if not dressed in black. You never knew who they were and it was rarely appropriate to question what they were doing in front of everybody.

Their presence was also encouraged by a few producers. I recall one at CBS and another at ABC, who lacked the skills to go out and find their own sources with the Taliban or Afghan officials. The security detail who were all ex-military had convinced the networks of their necessary presence to escort us everywhere. At times, I felt they were running the show by telling us where to go or forbidding us to cover an event for “your own safety." Maybe they were right at times but, de facto, it felt like they were in charge of the operation. Often at night, maybe after a few drinks, fist fights would break out in the garden of the compound between our guardian angels and Afghanis.

It’s always a delicate situation when you’re working in a country without law-and-order, or the law-and-order of gangs or para-military groups. What the Blackwater group did was similar to the death squads in Central America.

I wasn’t on the trip but after 2003, an ABC team was traveling from Amman, Jordan, to Baghdad across the desert. We used to travel in big four-wheel-drive vehicles and the trip could take anywhere between 8 to 16 hours. The variables were the border crossing, sand storms or vehicle breakdown...

In the case of this team, they had a guard from some American company traveling with them. At one point, they were already in Iraq, a vehicle caught up with them, probably to overtake them, but the guard got nervous so he shot the driver and the occupants of the other vehicle.

In such situations, I think it’s important to know some of the language because it teaches you how they think and knowing how your enemy thinks is crucial. If you don’t understand or read their body language, it’s easy to feel threatened and opening fire is a reaction of fear.

The pardon Trump gave that group does not make him/them shine and ultimately the image that America projects.

As for the recent concerns with domestic terrorism in the U.S., Fabrice wrote,

Carol and I watched the demonstration and ransacking at the Capitol. In situations like this--and I have covered a few--all that is needed is a spark, a word, can ignite the situation in worse ways than what happened at your Capitol.

People forget what happened in Moscow in 1993.

Deputies rebelled against President Yeltsin and set the Russian Parliament on fire. The irony is that the building housing the Russian parliament is called the "White House." Barricades went up around the building and the tanks moved in. I covered it for ABC News. 147 people were killed. That is what could have happened at your Capitol, too.

I don’t mean to say that an uprising in France was bigger than yours, but we had the yellow jackets destroying everything in their way for over a year [beginning in 2018). I know that a good amount of the riots never made U.S. television. It’s just the nature of the media at the moment. The yellow jackets never got into the Elysee Palace [the official residence of the French president] or the National Assembly [the center of the French Parliament lower house] but they wanted to and were pushed back. People got killed among the rioters and the police, buildings were set on fire and ransacked. The rioters in DC were extreme right, the rioters in France were extreme left. Sometimes both sides of the circle join at the tip.

What I see from this side of the ocean is that populism is on the rise everywhere, not just in America. If you try to place populism in history, it’s not a pretty picture whether in the 19th or 20th century. I’m trying to zoom out, widen the circle, and I see a lot of tension in Europe too, the kind that can lead to civil war or violence between social groups.

You wake up one morning and the tanks are at every corner.

Top photo of Fabrice Moussus provided by Herb Strentz and published with permission.