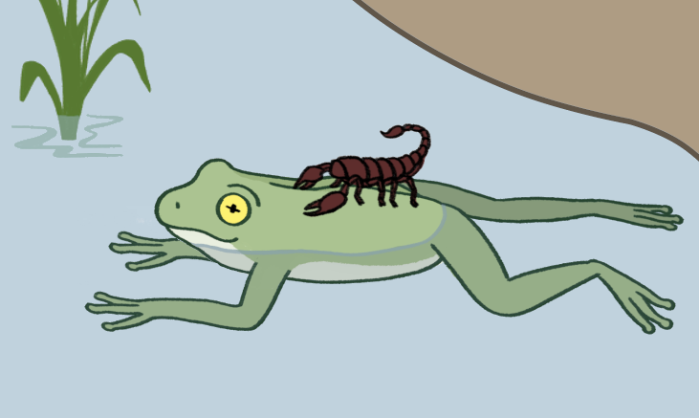 Bruce Lear: Donald Trump has already stung the GOP. But unlike the animals in a well-known fable, Republicans haven’t learned, “It’s just his nature.” -promoted by Laura Belin

As the Republican Party struggles with how to handle Donald Trump in his post-presidency, it may do well to remember the fable of the scorpion and the frog.

The scorpion, not being able to swim, asks the frog to carry it across the river. The frog hesitates because he fears the scorpion will sting him. The scorpion reassures him he won’t, because if he did, both of them would drown.

Reluctantly, the frog agrees. They start across the river. Midway across, the scorpion stings the frog and dooms them both.

The dying frog asks the scorpion why it stung despite knowing the consequences. The scorpion replies, “I couldn’t help it, it’s my nature.”

The critical problem facing Republicans is how to hold the Trump base and stay afloat long enough to resuscitate GOP values lying dormant the last four years at the feet of a narcissistic master. As a lifelong Democrat, I might not be the most qualified to define Republican problems, but here goes.

Consider how some Republicans twist themselves into human pretzels to walk back their initial, honest comments after the insurrection at the Capitol. Senator Lindsay Graham and House Minority Leader Kevin McCarthy offered two classic examples.

Like a good Trump loyalist, Graham was set to object to the electoral college certification in the name of voter fraud. But that was prior to the insurrection. When the Senate reconvened the evening of January 6, for a brief moment Graham could no longer stomach standing up for a lie. He said, “All I can say is count me out, enough is enough.”

But the conversion from a Trump sycophant to realist lasted a couple of days until Graham, at Trump's request, volunteered to be an adviser for him during his second impeachment trial.

For his part, McCarthy called on Trump to accept his share of responsibility for the violence that overtook the Capitol, saying on January 13, “He should have immediately denounced the mob when he saw what was unfolding. These facts require immediate action by President Trump.”

Before the end of the month, McCarthy made a pilgrimage to Mar-a-Lago to kiss the ring--hoping in 2022, the Trump base might propel him into the speaker’s chair. Clearly, the Road to Mar-a-Lago conversion reaffirmed it’s not the Republican Party; it’s the Trump Party, where power trumps principle.

Trump has already stung the GOP in two ways. But unlike the animals in the fable, they still haven’t learned, “It’s just his nature.”

First, Trump lost the presidency, primarily because of his mismanagement of a virus killing more than 400,000 Americans. Second, through his obsession with himself during the period before the Georgia Senate runoffs, Trump cost Republicans their Senate majority.

While painful, those two stings aren’t fatal. But if the Republican Party continues to be a wholly-owned franchise of the Trump enterprise, it may drown.

Yes to wanting a big tent.

No to a big tent filled with scary clowns.

Republicans also apparently have not learned their lesson from the debacle with Representative Steve King. Iowa's most-hated member of Congress spent more than a decade spewing outrageous ideas to get attention, until he went a bridge too far, nearly losing in 2018.

House leadership (that is, McCarthy) stripped him of all committee assignments in January 2019, citing overt racist comments in a New York Times interview. Voters in blood-red northwest Iowa finally replaced King by electing Randy Feenstra in the 2020 GOP primary. Feenstra is a hardcore conservative, but at least has public filters.

Now comes another embarrassment but one wholly embraced by Trump.

Newly elected Representative Marjorie Taylor Greene of Georgia feels comfortable in the Republican circus tent.  Prior to being elected, she said (among other conspiracy theories) that she doubted the Pentagon was attacked by plane, approved of calls for the execution of Speaker Nancy Pelosi, and speculated that Jewish-controlled lasers from space might cause California forest fires.

I’m not naive enough to believe there aren’t fringe players in both parties. But someone will need to refresh my memory the last time a Democratic member of Congress suggested executing a political leader.

Was Taylor Greene stripped of committees by her leadership? No, McCarthy assigned her to both the Budget and the Education and Labor committees. Later, the Republican caucus met to discuss her fate, but decided to double down and leave her in place. After Republicans refused to act, the Democratic majority and eleven renegade Republicans voted to remove Taylor Greene from all committees.

Why are Republicans scared to denounce a freshman in Congress? The simple answer is it’s the Trump Party, and anyone who dares speak ill of the leader will be primaried or worse. Members of Congress like Representative Liz Cheney and Senator Ben Sasse risk censure from their own state parties for standing up to Trump.

Bipartisanship is a sweet idea, and President Joe Biden spoke eloquently about his hopes. But it’s impossible to cooperate when the leader of one of the parties will sting even those who want to work together.

Top image: Illustration of the classic fable The Scorpion and the Frog, created by the artist Kurzon on February 4, 2020. Licensed under the Creative Commons Attribution-Share Alike 4.0 International license, available via Wikimedia Commons.