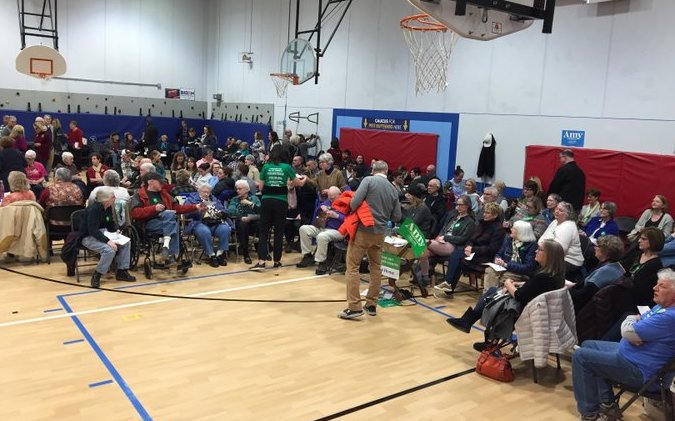 Ira Lacher makes the case that the Iowa caucuses are too important for Democrats to do without. -promoted by Laura Belin

Yes, the 2020 edition of the quadrennial Iowa Winter State Fair was a worldwide embarrassment, at least on the Democratic side, due to poor results reporting, stacked atop tremulous party management, training, and supervision. (Don't look so smug, Republicans; you've had your kaukus kerfuffles too.)

But the arguments published recently in the Des Moines Register by those otherwise well-regarded gentlemen, who have been close to the process, as journalists and then (for Noble) as a Democratic Party insider, are far less convincing than the Pepsi Challenge.

Noble argues that the Iowa Democratic Party doesn't use the caucuses for the primary -- ahem, sorry about that -- purpose for which they were intended: to build their organization so they can win elections. Cooney, who retired recently as the dean of Iowa TV newscasters, adds what has become the mantra of out-of-state caucus detractors: that Iowa is too narrow, demographically, to be a reasonable barometer of candidate preference.

Cooney's point is as constant as blizzards in March. For years, critics have argued that Iowa is too white and too small to effectively indicate candidate preference. (Barack Obama might disagree.) But campaign organizers will tell you they'd rather start in a centrally located laboratory where costs, including air time, travel, lodging, and personnel, are relatively inexpensive and gauging candidate appeal is easy, since Iowans desire to meet every candidate five or six times. (Yes, let's start off in a cheap state to do business, like California.)

Noble takes a cue from Elton John's "Honky Cat" -- the party should get back to the woods and use the caucuses as originally intended: party organization. Meanwhile, let's all trade in our smartphones for original devices, that only make calls.

Arguing to abandon the caucuses as ineffectual overlooks that they have become so not out of some inescapable Darwinian inevitability but because the Iowa Democratic Party has made them so. And what the party has torn asunder it can repair.

For starters, move party organization -- electing convention delegates and committee members and suggesting platform planks -- to the top of the caucus agenda instead of relegating it after the presidential votes, when everyone's gone home. The IDP could even hold the party events one day and the presidential preferences on another, the way the Oscars and Emmys separate the less glamorous awards from their main events. And hold the main event on a weekend afternoon so as not to inconvenience working parents.

The IDP could make the caucuses more available and dependable online by developing secure, reliable results reporting software, then thoroughly, thoroughly testing it. The party could thoroughly, thoroughly train prospective caucus leaders in how to use the software, how to report results and how to run the events. And it could work more closely with media to lay out reasonable expectations as to when and how they can receive results.

Reforming the caucuses won't fix the IDP's inherent inability to recruit operatives, volunteers, and appealing candidates, and furnish them with persuasive messages to offer voters. But it will preserve an attraction of a state that has seen its influence decline as ethanol ebbs in appeal, centennial farms give way to agricorporatism, major manufacturers ship out, and our public universities become casualties of the pandemic and legislative malignant neglect.

The Iowa Democratic Party should treat the caucuses as a friend of mine treats the truck he's kept running since his long-departed college days. It's too useful to be without, so when something goes wrong, he fixes it. "When you have a machine that you rely on," he explains, "you hold on to it. And do what's necessary to keep it running."

The Iowa caucuses allow out-of-state and foreign journalists to visit every four years and spotlight our innovation, determination and energetic people, reminding the world that Iowa is more than a quaint living-history farm. Abandon the caucuses and we might as well hang out a statewide estate-sale sign.