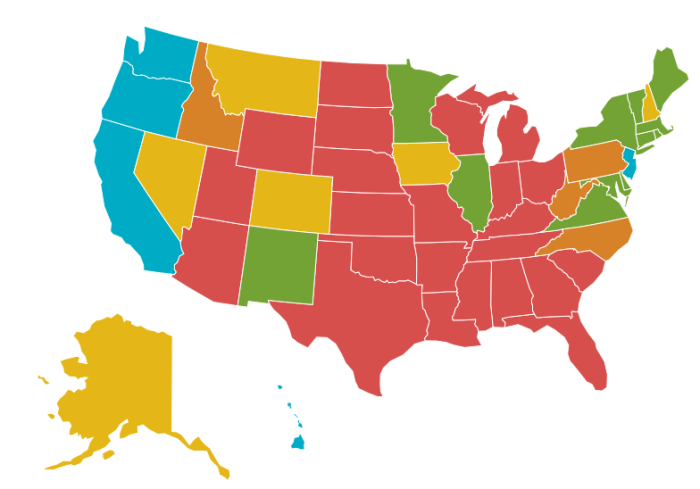 A national review of state policies on reproductive health and rights gave Iowa a mixed grade for policies on sex education and access to abortion and family planning.

The nonprofit Population Institute‘s 50-state “report card” gave Iowa a C based on thirteen metrics related to “effectiveness, prevention, affordability, and access” to sex education and reproductive health care. The “minus” was added because of a 2019 law that made Planned Parenthood ineligible for certain sex education grants. That law is on hold pending the Iowa Supreme Court’s review of a lower court ruling, which found the statute unconstitutionally targeted Planned Parenthood while allowing another abortion provider to continue to receive the sex education funding.

The Population Institute’s two-page report on Iowa, enclosed in full below, contains more detail about the scoring in each category. The state received its best marks for having relatively low rates of teen pregnancy and unintended pregnancy. Iowa’s approach to Medicaid expansion lost points due to “harmful waivers such as lock out penalties that limit the number of people who can use the expansion.”

The scorecard gave Iowa full points for not restricting private insurance coverage of abortion and having a state-funded program to cover family planning services. That was a generous assessment, given that the state-run program created for the sole purpose of defunding Planned Parenthood serves far fewer people now than did the Medicaid family planning waiver it replaced in 2017. In fact, abortions in Iowa were up 25 percent during calendar year 2019 compared to the previous year, according to Iowa Department of Public Health data.

In the “prevention” category, Iowa got full points for allowing minors to consent to contraceptive services and allowing nurse practitioners and nurse midwives to provide birth control medications as well as treatment for sexually transmitted infections. The state lost points on the sex education metric because even though public schools are required to provide medically accurate information, including material discussing abstinence and HIV prevention, the guidelines do “not require that HIV education include condoms or that sex education include contraception.” In addition, Iowa fails to “require emergency rooms to provide information about emergency contraception and dispense it on request to sexual assault victims.”

As for access to abortion services, the report noted that 58 percent of Iowa women “live in a county without an abortion provider” and cited some laws the Republican-controlled legislature and governor have adopted in recent years, such as a near-total ban on abortions after 20 weeks of pregnancy. However, Iowa still scored higher than many other states in this category, because there are no laws on the books here that would immediately ban abortion if the U.S. Supreme Court overturns Roe v. Wade, nor has the state enacted particularly burdensome regulations for abortion providers.

Iowa was among three states that received C-minus scores, barely above the national average. Four states had a D or D-, while 23 states received a failing grade. Of the states bordering Iowa, Minnesota and Illinois had scores in the B range, while South Dakota, Nebraska, Missouri, and Wisconsin all were graded F.

The Population Institute seeks to “achieve a world population in balance with a healthy global environment and resource base” by promoting “universal access to family planning information, education, and services.” 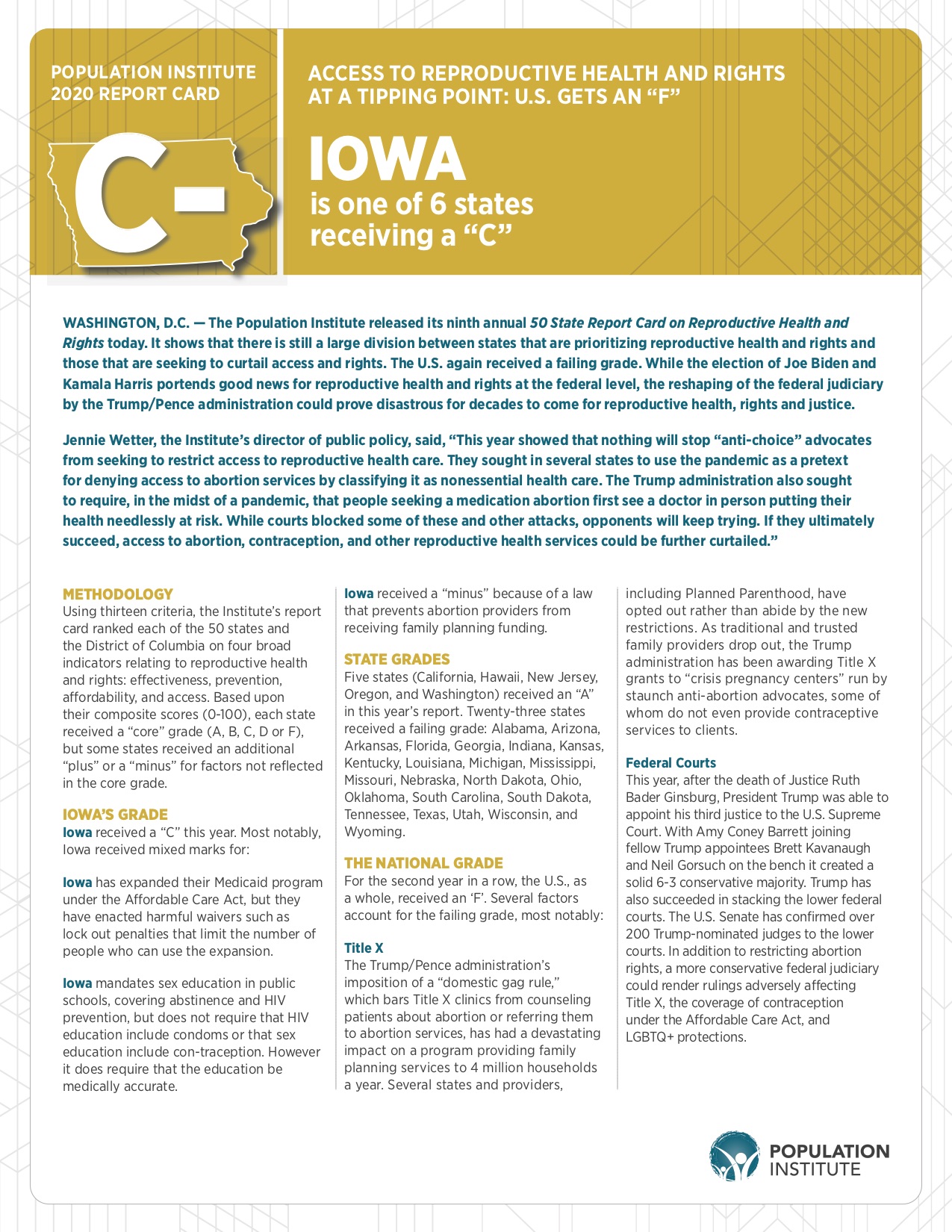 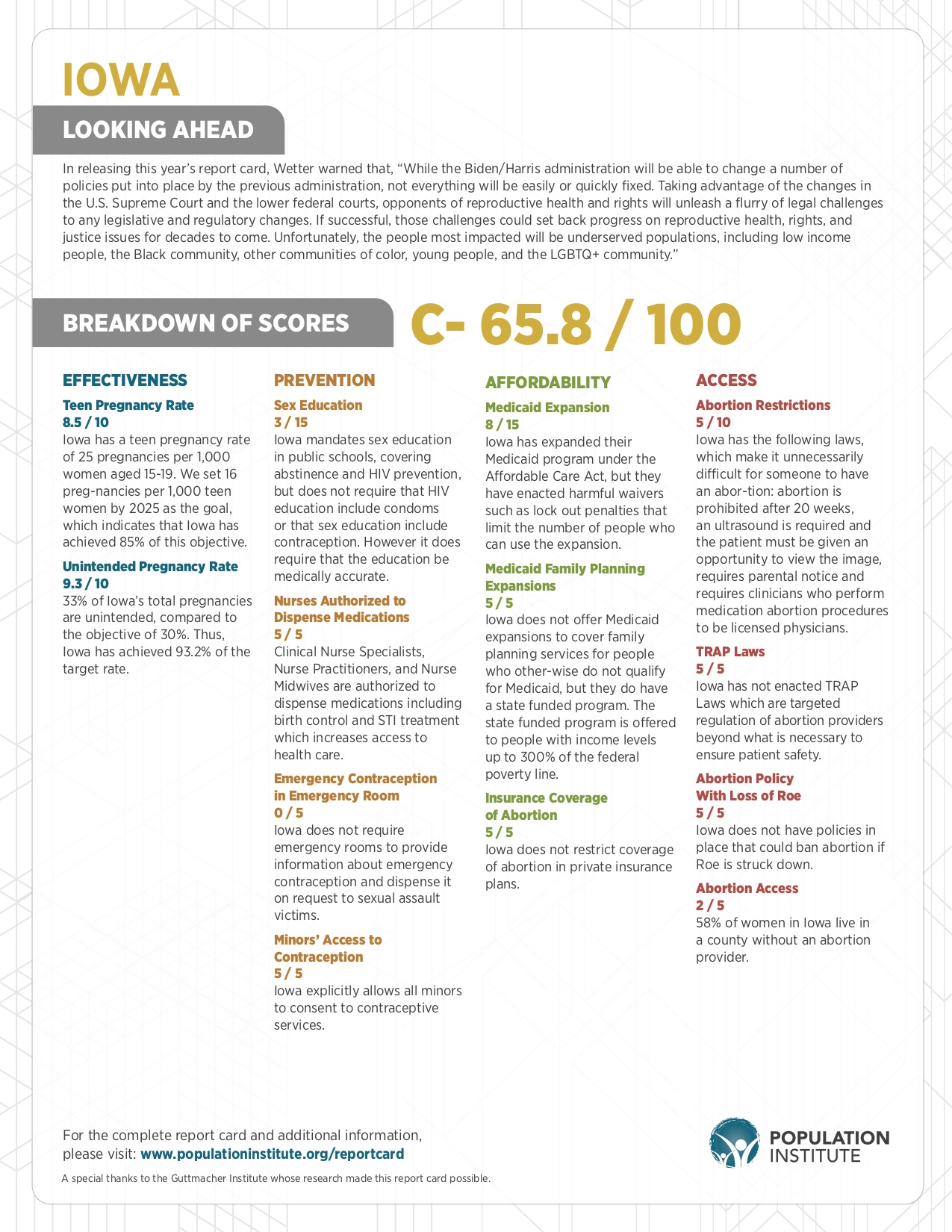