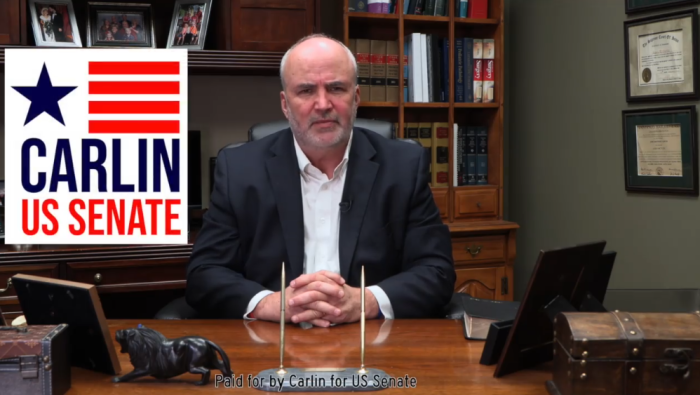 After keeping a relatively low profile during his first few years in the Iowa legislature, State Senator Jim Carlin has been "loud and proud" this year on matters that might appeal to conservative Republicans.

Speaking on the Iowa Senate floor, Carlin has repeatedly alleged that the 2020 presidential election was stolen. He introduced a "bathroom bill" that became the first legislation targeting trans youth to make it through an Iowa House or Senate subcommittee. He led an effort to ban employers from requiring COVID-19 vaccines, and turned a subcommittee hearing on that bill into a platform for airing anti-vaccination views. He introduced a bill that would have required state university employees to be surveyed about their political views.

Carlin announced in February that he would seek the 2022 Republican nomination for U.S. Senate, whether or not Senator Chuck Grassley runs for re-election. In a campaign video, he declared, "Donald Trump made the Republican Party the party of working men and women," and outlined "core beliefs" that hit everything on the usual conservative checklist. “I know the people of Iowa very well,” Carlin told Jacob Hall of The Iowa Standard in February. “I’ve literally represented the forgotten man for the last 30 years.”

Nevertheless, the people of Iowa have little apparent interest in his Senate bid.

Candidates for U.S. House and Senate were required to report by April 15 on their fundraising and spending during the first quarter of the year. Carlin's filing with the Federal Election Commission showed $38,877.50 in total contributions, of which $27,987.50 came from the candidate himself. Ten other individuals donated a total of $10,200, including a relative in New Hampshire who gave $2,000.

Carlin's campaign spent $27,815.68 during the first quarter, mostly on consulting, voter data, and photography or videography. The campaign also spent $250 to advertise on The Iowa Standard website, which seems in line with market value (as opposed to the $25,000 Governor Kim Reynolds' campaign and the Republican Party of Iowa each spent last year to advertise on the brand new Iowa Field Report website).

As of March 31, Carlin's campaign had $10,474.79 cash on hand. That's nothing like what someone would need to run a serious statewide primary campaign.

In the latest Iowa poll by Selzer & Co for the Des Moines Register and Mediacom, 35 percent of Republican respondents said they hoped Grassley would retire in 2022. Carlin has failed so far to tap into that group of potential supporters.

Grassley filed a statement of candidacy with the FEC earlier this month and reported a little more than $2 million cash on hand as of March 31. The senator raised $256,497.74 during the first quarter, including $144,700 from a few dozen Republican or corporate PACs, $98,023.11 from individuals, $10,204.52 in transfers from other committees, and $3,555 in interest income. The campaign spent $40,836.93 from January through March, mostly on various kinds of consulting.

The $11,400 in contributions Grassley's campaign refunded during the quarter exceeded the total amount Carlin raised from donors other than himself.

Other ambitious Republicans are patiently waiting for Grassley to announce his future plans sometime this fall. If the senator decides against seeking an eighth term, former acting U.S. Attorney General Matt Whitaker would likely become the front-runner for the GOP nomination. Other candidates with strong fundraising potential might include U.S. Representative Ashley Hinson or the senator's grandson, Iowa House Speaker Pat Grassley. The field could become crowded; five Republicans ran for U.S. Senate in 2014, the last time Iowa had an open seat.

Whether or not Chuck Grassley is on the June 2022 primary ballot, Carlin seems unlikely to be a real contender for the nomination.