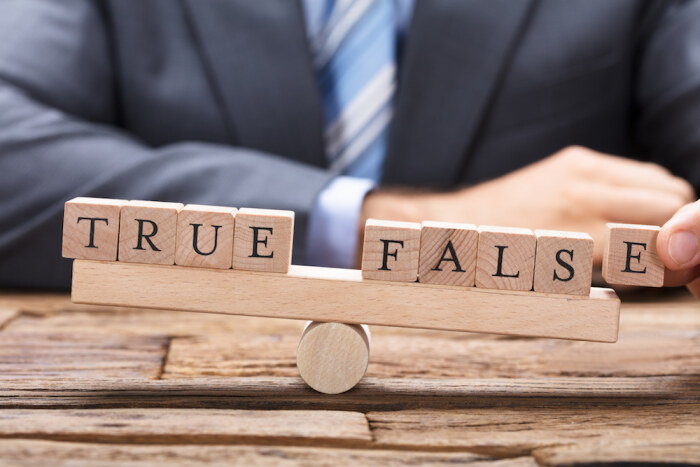 Once upon a time, there were children who wanted to be kind. They joined the Boy Scouts and the Girl Scouts because they knew Scouts did good deeds.

They had heard that people often had to wait in long lines to vote — even on very hot or very cold days. So they thought a good deed would be to bring lemonade and Girl Scout cookies to folks in line on hot days and hot cocoa and cookies on colder days. They might even earn Scout merit badges in Civics, Citizenship in the World or one like that.

One hot election day, they brought lemonade and cookies to people in line. But they did not get a merit badge. They got police records as juvenile offenders, because what they did was against the law. For a time, they did not live happily ever after.

In truth, it is not a fable.

U.S. Senator Chuck Grassley has defended himself against accusations that he misled or lied to constituents in denying a Republican “voting reform” law in Georgia prohibits family and friends from bringing nourishment to people waiting in line to vote, perhaps for hours.

But this just gets worse: the senator’s defense distorts the truth as much as his comment that prompted the accusations.

The Georgia law bans giving water or food to would-be voters within 150 feet of polling sites. So, if an elderly or infirm prospective voter is hungry or thirsty, friends and family had better stay away. To put the worst light on it, the Georgia law makes it a crime to nourish a mom or dad or any ailing person who finds a measure of self-worth in voting and endures long lines to do so.

In the April 10 edition of his newsletter THE SCOOP, Grassley said the law “does not prohibit voters from being able to get a drink of water while waiting in line as partisans have falsely claimed.” He focused on the person in line struggling to get a sip of water, ignoring language making it a crime to give the person food or drink.

That provision contributed to a corporate revolt in Georgia, including moving the Major League Baseball All-Star Game from Atlanta to Denver.

As Bleeding Heartland discussed here and here, this reporter emailed the senator on April 13 to point out the difference between what THE SCOOP reported and what the law says. That message noted that the senator's statement should be corrected.

Grassley stood by his earlier statement in a May 5 email (enclosed in full below). As a matter of fact, he declared that the nonpartisan fact-checking website PolitiFact had ruled the no-bread-and-water accusations to be “mostly false.”

A check of PolitiFact’s “Truth-O-Meter,” however, reveals that the senator is again misrepresenting reality.

Amy Sherman wrote the fact check in question, which focused on comments by Josh Holmes, former chief of staff to Senate Minority Leader Mitch McConnell. During a March 28 interview on Fox News, Holmes claimed the Georgia law had not “criminalized giving people bottles of water.” It was that statement--not criticism of the Georgia law--that PolitiFact found “mostly false.”

Sherman noted, “The law makes it a misdemeanor to give away food or water within 150 feet of the outer edge of a polling place building or within 25 feet of any voter in line. Violations of this law are punishable by up to a year in jail and a $1,000 fine.”

Keith Williams, general counsel to Georgia's House Speaker David Ralston, told PolitiFact: "Any individual other than a worker at a polling place is prohibited from handing out water, etc., within 150 feet of a polling place or within 25 feet of the line."

Other legal experts agreed. For example, Loyola Marymount University law school professor Justin Levitt told PolitiFact, "I read, and I believe courts would read, SB 202 to prohibit anyone from giving food or water to any voter in line."

What is going on here? Here’s how we might make sense of it.

The ban on bringing nourishment to would-be voters was not necessary, unless the Georgia legislature was spiteful. (The Brennan Center for Justice at New York University's School of Law said that among the voting “reforms” it had examined, the Georgia provision was “particularly cruel.”)

Given the most favorable interpretation, the intent was to prohibit political organizations from soliciting votes by providing food — fearing the food might be a pitch for the person’s vote. But there already are so many prohibitions against campaigning near polling places that outlawing food and water is unnecessary. In addition, seeking votes is not mentioned in the ban on people bringing food and drink to those in line.

Perhaps, the legislature did not deal with the details in the 98-page bill. It does happen that state lawmakers, including in Iowa, confuse what they intended with what is written in the law they enacted.

But courts will look at what the law says. It's the legislature's job to clean up any messes in a poorly-drafted statute.

In compassion for older or infirm voters, the Georgia legislature said it would not prohibit the Secretary of State and election officials from allowing voters to leave the line to sip water “from an unattended receptacle.” Perhaps that language is what Grassley had in mind when he said prospective voters would have access to water.

Or perhaps, Grassley’s reference to “mostly false” arguments against the law dealt with provisions not related to the ban on providing food and drink.

This reporter emailed Grassley's office on May 5, asking the senator or his staff to provide a source for their “mostly false” categorization. This post will be updated when or if they respond. A search of the PolitiFact website found the “Mostly False” label applied only to how Holmes had characterized the Georgia law.

The Georgia mess and Grassley's misdirection stem from the same madness: the “Big Lie” that the 2020 presidential election was stolen from Donald Trump. Those faithful to the former president hope he will run again in 2024. Republican-controlled legislatures around the country are churning out “voting reform” measures to make sure another candidate does not “steal” an election by getting 7 million votes more than his opponent, as President Joe Biden did.

Sadly, Grassley is among those refusing to say Biden won the 2020 race fair and square, and supporting voter suppression under the guise of “transparency" and "trust in future elections.” 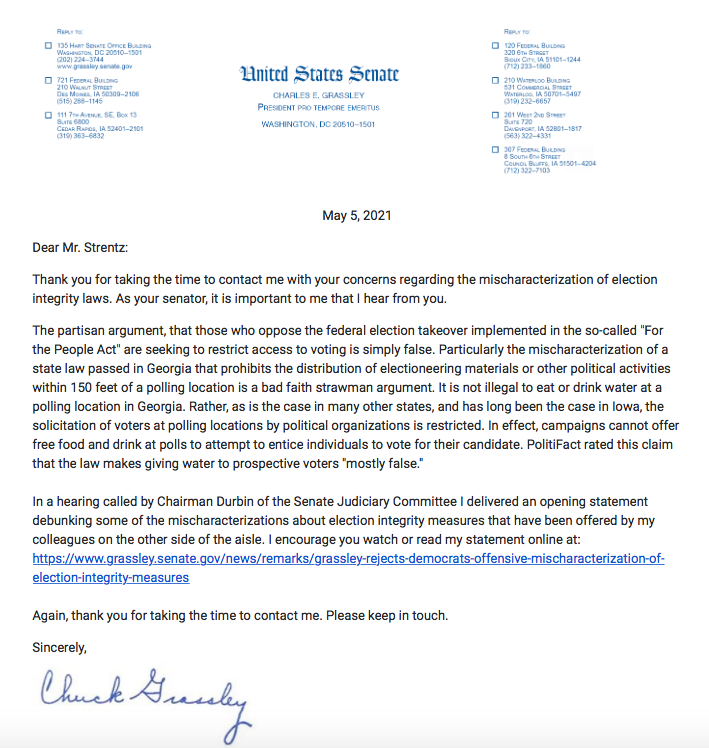