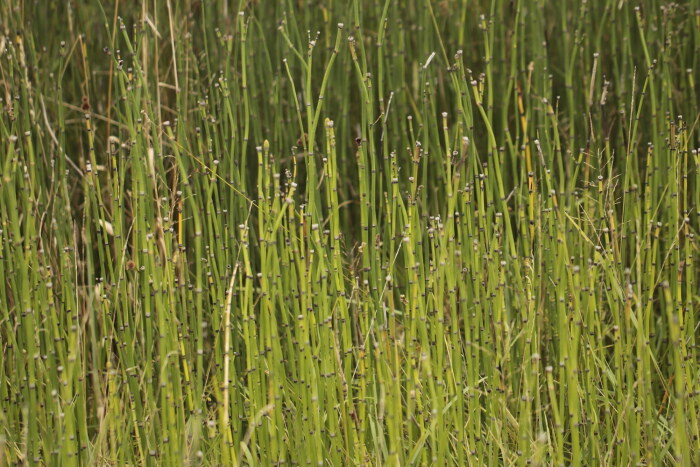 The horsetails and scouring rushes (genus Equisetum) are rather odd plants on the Midwestern landscape, because they look like nothing else. They are related, by their genetic makeup and reproductive means, to the ferns. Occasionally, scouring rushes grow in dense colonies in the roadsides, where their dark green color and parallel vertical growth are a contrast with the other plants on their margins. A few plants manage to rise in the midst of such colonies, but these plants often are very dominant in the space they occupy.

Horsetails and scouring rushes have historical uses for several tasks, and they have provided medicines for some ailments, although those sometimes contradict each other. In general, the medicinal purposes are not backed by scientific evidence – only the testimonials of herbalists and the recorded uses by ethnobotanists who studied small-scale cultural groups in North America and elsewhere.

Yet the frequent occurrence of at least two species makes them deserving of attention as a native plant species.

Fossil records indicate that the ancestral plants of today’s Equisetum (eh-kwi-SEE-tum) grew as early as the late Devonian Period, 419 to 359 million years ago. In Iowa, Devonian bedrock lies below the surface in a band from Mitchell and adjacent counties to parts of Louisa and Muscatine Counties, but it may be buried under younger bedrock from that band to the west. However, the earliest ancestral relatives were land plants, while Devonian bedrock in Iowa came from underwater deposits. While Iowa’s Devonian deposits are rich with aquatic life forms, they have no plants from the lineage of Equisetum.

Common Horsetail often is about a foot high, and its stem (like all Equisetum) is jointed, with a whorl of branches at the slightly swollen joints. The first two photos below show this species. The plant’s resemblance is to a fir or spruce tree or a horse’s tail, but with a lot of air space. Over a growing season, the branches can develop branchlets themselves. The above-ground plant develops from an underground rhizome, and numerous plants in a colony can grow from a single, horizontal rhizome. Sometimes, an entire colony may grow from that one root, meaning that the colony actually is a single plant, identical in its genetic makeup at any point. 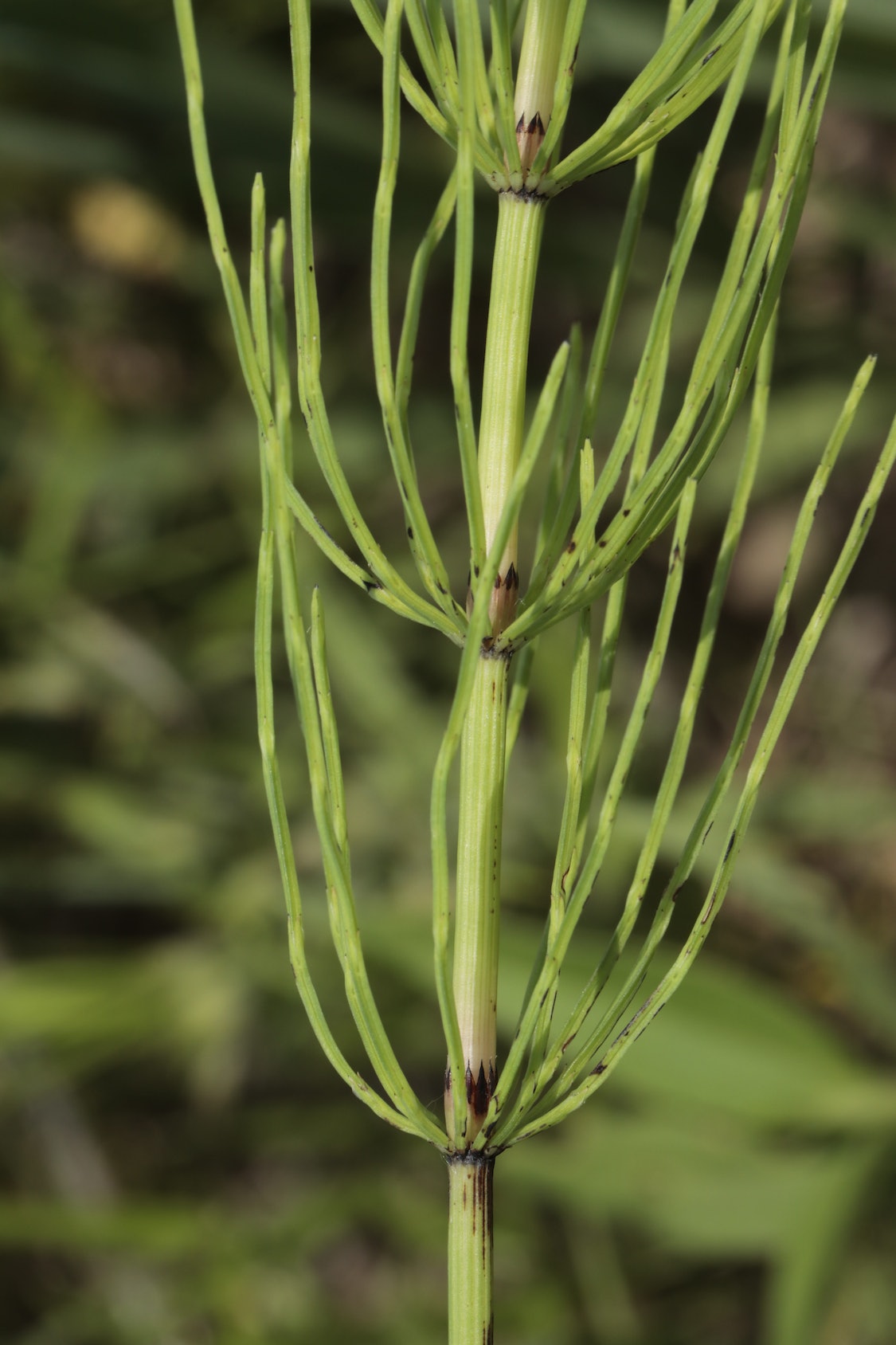 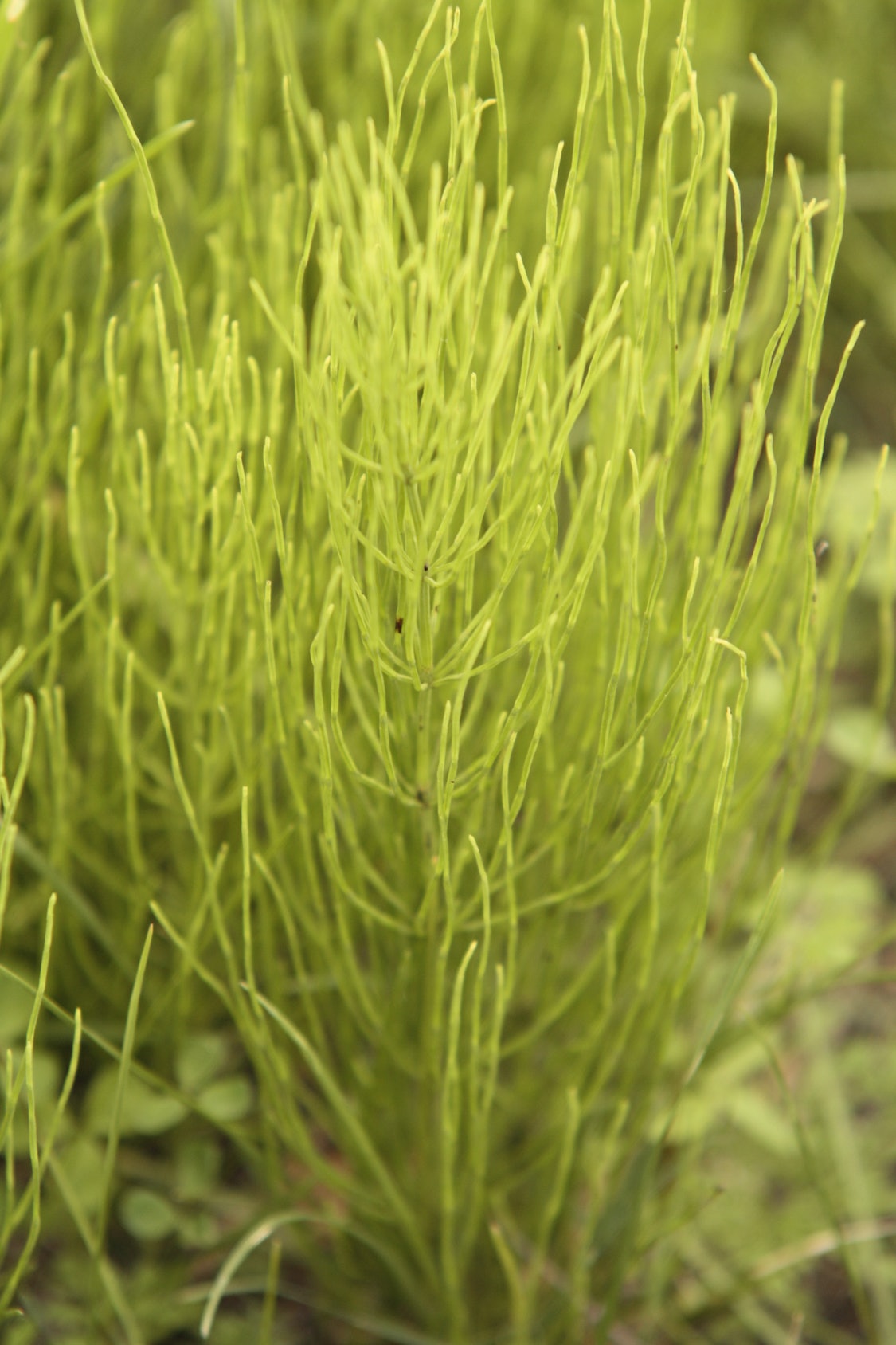 Common Scouring Rush has a similarly jointed stem, but the stem is wider (about a half inch) and unbranched. Its height often is around three feet. To the touch, the surface of the stem is rough, and a person walking through a patch may notice the sound of stems rubbing each other, a sandpapery noise. Sometimes scouring rush may develop branches near the tip, especially if the tip is damaged before the reproductive part (strobilium or “cone,” in two photos below that show different points in maturation) appears. Again, many visible plants in a cluster may grow from the same rhizome, a feature of many fern relatives. 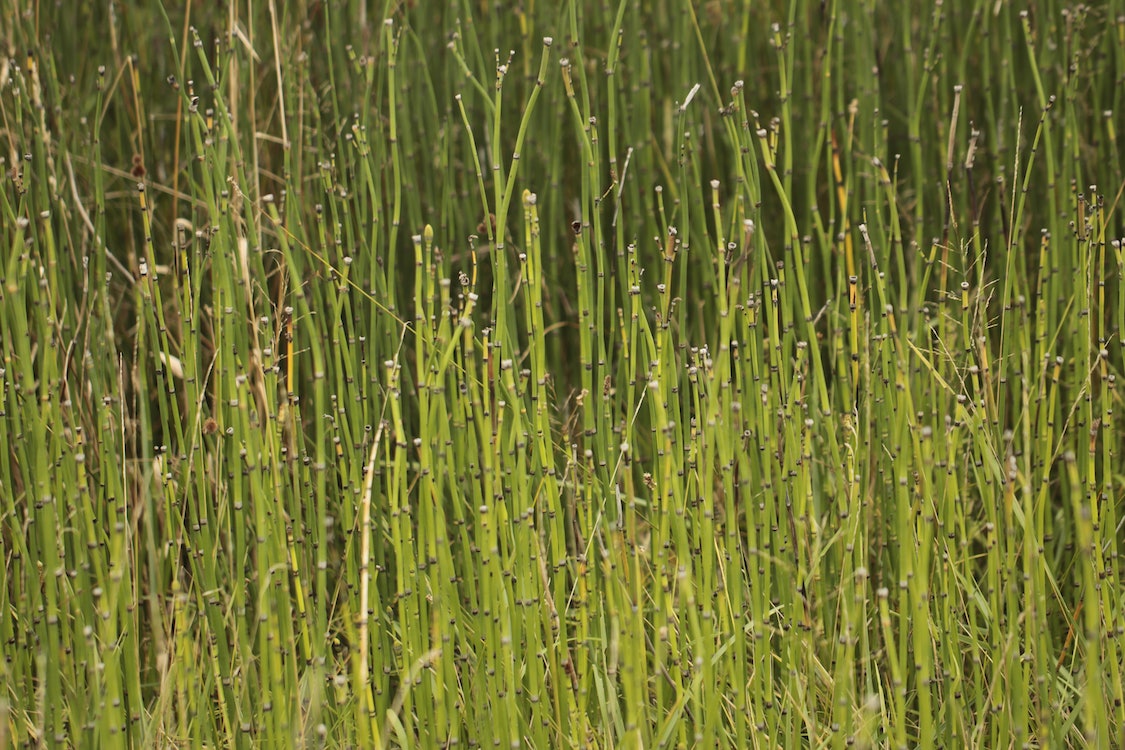 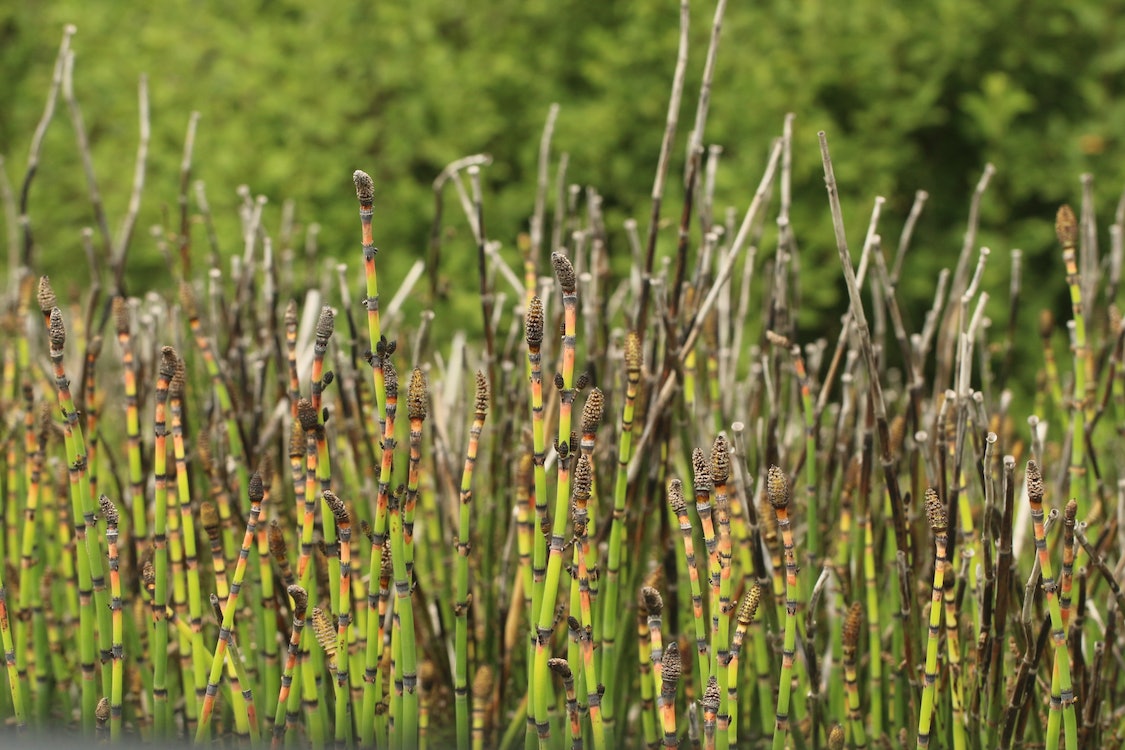 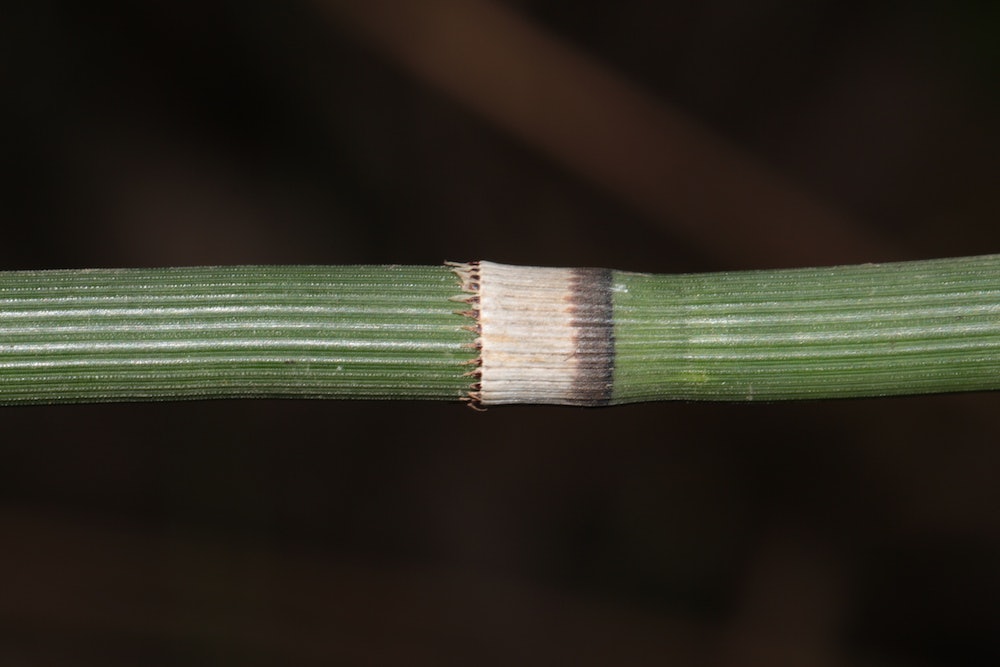 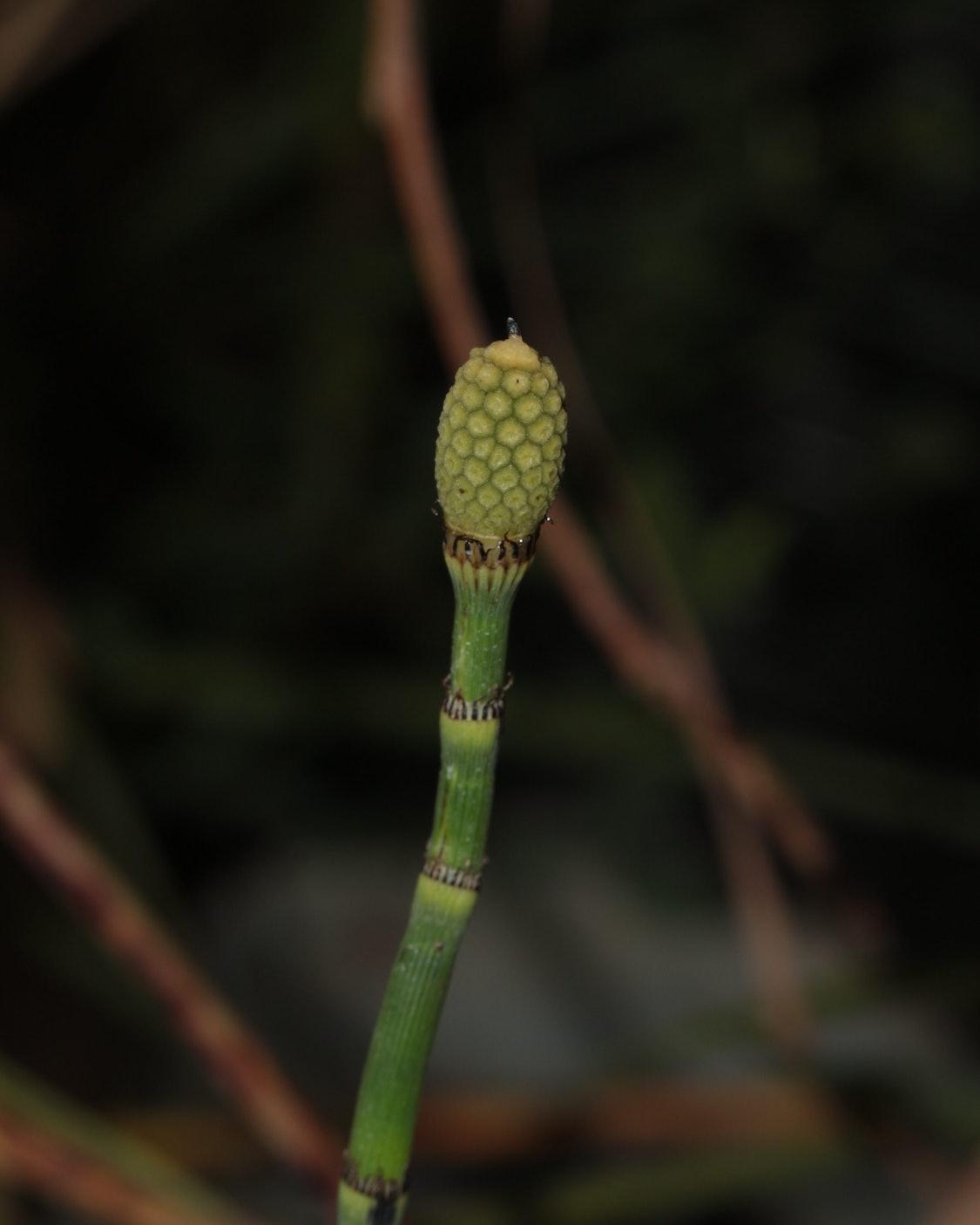 Often, Common Scouring Rush grows in locations that suggest it was once an important component of pre-settlement wetland margins and wet prairies. It is often found next to drained, farmed prairie potholes; unchanneled waterways that may have been wet meadows; the fringes of marshes, including former marshes; and similar spots. A moment’s pause sometimes allows me to imagine a dense colony that rings a pothole in just the right conditions, with bulrushes, cattail, sedges, and less dominant plants in the wetter interior. Or I “see” a damp meadow in a waterway, full of scouring rush, with colonies of other plants upstream or downstream, depending on soil moisture and other conditions.

Smooth Scouring Rush is similar to Common Scouring Rush in appearance, but its stems are smooth, as the common name (and the scientific species name, laevigatum) indicate.

The name “scouring rush” comes from the presence of silica crystals on the surface of the stems. The plants are like living sandpaper, and they were used by at least some Native Americans to smooth wood, such as bow staves. Early settlers used them to scour metal pots and pans, possibly with the addition of homemade soap or a saponin-containing plant like Bouncing Bet (Saponaria officinalis). My own experiments with it have proven it to be an abrasive on metal that leaves obvious scratches on aluminum pans. It does clean, and it removes scorched spots effectively. I compare it to a coarse-grit sandpaper, but it holds up when wet. I don’t recommend it for coated cookware.

Numerous uses for medicine are on record, and a few as food when the plants are young. However, research on the plant not only has failed to demonstrate effective herbal treatments, but it has shown that use of the plant, especially Common Horsetail, can result in a vitamin B1 deficiency. The deficiency has been observed in cattle that eat it, although I doubt cattle are attracted to it in pastures, as long as other good forage is available. Maybe it has been mowed for hay, mixed in with more desirable grasses and legumes.

As garden plants, the horsetails and scouring rushes are aggressive spreaders, trying to become the dominant species. I have seen planted stands that crowd out most other plants but that also have wide concrete sidewalks or parking lots that limit their underground spreading. In most cases, I don’t recommend them because of their dominance and spread.

If you want to try the larger, unbranched species as sandpaper or pot scour, try to identify the species, and make sure you are collecting a common one. It’s unlikely that you would gather enough to kill an entire patch, partly because of the rhizomes, but I encourage the wildcrafter’s rule of thumb: take only what you need, and never more than 10 percent. If the colony is sparse or unhealthy, leave it alone and look for another. Some regard these plants as nuisances, but they belong on our landscape, so judicious collecting and use should prevail.

Iowa has other species that are more limited in distribution and uncommon to rare in their ranges. The rare Swamp Horsetail (Equisetum fluviatile) occurs roughly in the northeast half of the state, where it grows in wetter sites than the three common species. Meadow Horsetail (E. pratense) is found in limited habitats such as seep wetlands, algific talus slopes, and sandy woodlands; it may be common in a band of counties from eastern to northeastern Iowa, but rare in a scattering of northern and central counties.

Woodland Horsetail (E. sylvaticum) has a similar range but is never common. In addition, there is one other rare species, and several hybrids occur that can make identification difficult. Hybrids occur where two species overlap in range and habitat.