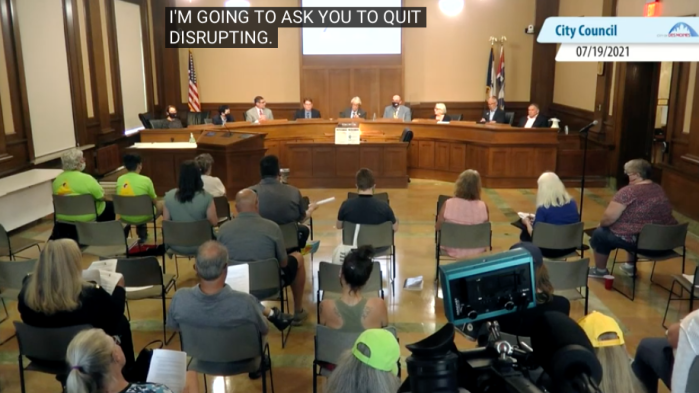 Brandi Webber is a candidate for Des Moines City Council in Ward 3.

So about the Des Moines City Council meetings... You may have seen coverage (again) about distractions, protests and arrests. "Why is this happening?" you may be asking yourself. I certainly can't answer that alone, but I can add some important context as someone who was inside the chamber during the July 19 meeting.

The council has continually attempted to limit public comment and abuses the consent agenda to push through controversial items, items on police funding, criminalizing and punishing the houseless, denying accessibility concerns and much more. This has been happening over the course of the last year and a half, while the public has been speaking up and begging to be heard. During the virtual meetings the council was able to silence the public. Now that meetings are back to in person, there is no mute button to silence and control the public.

So the public made themselves heard. Groups like Des Moines People's Town Hall put together email campaigns to make it easier for the public to jump through the ridiculous hoops to simply be heard. The result was city manager Scott Sanders pulling item #54G, which had been on the consent agenda, off of the agenda entirely.

As Andrea Sahouri and Melody Mercado reported for the Des Moines Register on July 19, public records show the CEO of The Conley Group, which provides some security services for the city of Des Moines, "referred to participants in racial justice protests in the city last year as engaging in "terrorism" and members of the local Black Liberation Movement as "little sissy b******.""

The records obtained were emails Tom Conley sent to Des Moines Police Chief Dana Wingert, among others, meaning that city leaders should have had already had all the information they needed to properly evaluate Conley's contract. The Register found that Conley also made his views public: "Additionally, on his Facebook page, he also referred to protesters as "snot-nosed, punk-@$$ed, basement dwellers" and members of the local Black Liberation Movement as "nothing but weak, punk-***ed little sissy b******."" More on what should come next with Conley later.

During the July 19 meeting, council members admitted the tremendous amount of feedback they had received on the problematic consent agenda items. Council member Josh Mandelbaum even made a motion to hear public comment on the items, although he felt they were "all pretty basic items that I plan on supporting," and asked to personally comment on Item #54B.

Then, Council member Joe Gatto said the quiet part out loud by admitting he didn't even know what items were being asked for public comment because there were so many of them. "I'm not going to support anything like that to sit here and be able to take some kind of criticism or comments of any kind. I think we've had plenty of that," Gatto said.

Side note.. Council is complaining that "all the feedback looks the same." When you make it this inaccessible to provide feedback to the council on items that impact the community, that is what happens. It should be simple for community members to voice their concerns and it simply is not. But I digress...

The council voted down the motion to allow public comment. Immediately after, they unanimously voted to approve the consent agenda. The only item removed for comment was #54B for Mandelbaum to speak on--but no public input was allowed. That is not how the city council should be operating.

Only after all of these actions by council did the peaceful protests start. The protestors were within the rules and their rights. The police were called in and Mayor Frank Cownie was heard telling them to "do your job." Police then forcefully arrested four community members, but not before all council members left the chamber as to not bear witness to the fruits of their labor.

Some of the officers involved in the violent arrests were undercover and planted throughout the chamber, taking up spaces meant for the public. What was made clear by the police escalating each interaction with community members is this: "do your job" means to brutalize and intimidate dissenting voices and opinions.

If you are still with me, thank you. So, now what?

The agenda item formerly known as #54G is not gone. After exhaustive reporting by Sahouri and Mercado and countless requests from the public, city manager Sanders pulled the item from the July 19 agenda, but said the matter would be "fully investigated" before the council meets next on August 9. Based on past actions, I would guess that the item will find its way back on the consent agenda after said "investigation." If that happens, it will be up to the community again to speak out and make themselves heard on what is and what is not acceptable when it comes to public safety in Des Moines.

I would like to go a step further and propose additional steps the council should be taking to begin actually representing the interests of the community.

Change is possible. Change is necessary. However, it will not come by waiting for those in charge to decide to do the right thing. We must make our own change by continually pushing for what is right.