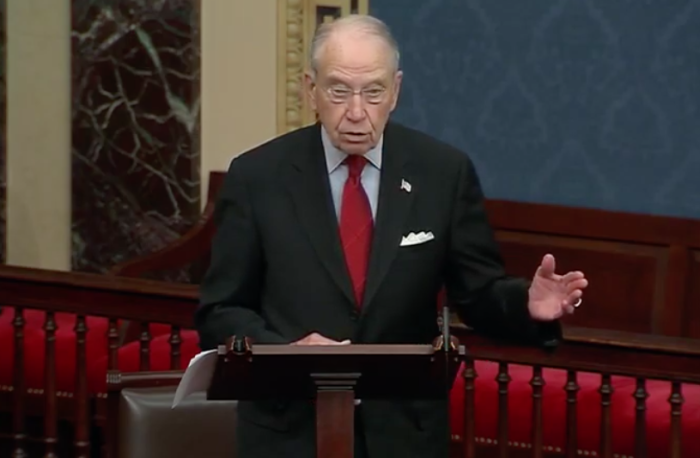 U.S. Senator Chuck Grassley asserted on August 9 that Democratic senators may "do lasting damage to our political system" by investigating former President Donald Trump's attempts to subvert the peaceful transfer of power to President Joe Biden.

In a 12-minute speech on the Senate floor, Grassley downplayed the latest revelations about Trump's attempts to use the Justice Department to reverse Biden wins in some states.

Grassley was unhappy with how some Senate Democrats spoke about the closed hearings over the weekend. Reprising his role as an apologist for Trump's abuses of power, Iowa's senior senator chastised the majority party in his August 9 remarks.

"This country has had to deal with Democrats' obsession with destroying Trump for much too long," Grassley lectured. "In the process, I fear my colleagues on the other side of the aisle have done and will do lasting damage to our political system."

Longtime Congressional reporter Emily Singer noted that Grassley used his position on the Judiciary Committee to investigate conspiracy theories about the 2016 election all the way through 2020. One of his favorite hobby horses was the idea that Ukraine (not Russia) interfered in the 2016 election to benefit Hillary Clinton.

But Grassley's spin today was even more remarkable, because it's hard to imagine anything could do more "lasting damage to our political system" than using the Justice Department to reverse the result of a free and fair election.

The senator went on to say (starting around 7:25),

With respect to Trump, and what was said at these high-level meetings, those are the types of meetings where all kinds of things are discussed. That's the whole point.

The president has every right to discuss ideas and strategies with his closest advisors. The president--whether that president is a Democrat or Republican--should feel unrestrained to bring ideas to his closest staff for robust discussion. Eventually the facts will come out, and Trump will have to address them, good or bad, depending on the facts at hand.

However, the essential question that should be asked: what was the final decision?

Emails obtained by ABC News show that in late December, Clark drafted a letter "urging Georgia's governor and other top officials to convene the state legislature into a special session so lawmakers could investigate claims of voter fraud" and possibly appoint a slate of Trump electors. (The deputy attorney general refused to sign off on the letter.) Rosen told the Senate Judiciary Committee that Clark "went out of the chain of command to push the fraud claims" five times, including on January 3, when Trump "had the two men vie for the attorney general's job before deciding not to replace Rosen with Clark," CNN reported.

In Grassley's world, it's no big deal that the president tried to enlist the Justice Department in his Big Lie about the election. Only the "final decision" matters, and Trump did not ultimately fire the acting attorney general or his deputy.

Trump also didn't manage to stop Biden from becoming president. But not without a fight, as the world saw on January 6.

No one who values democracy should want a president to "feel unrestrained" about exploring ways to stay in power after losing an election. That's not a "robust discussion," that's a criminal conspiracy.

In any event, Clark was the acting head of the Justice Department's civil division, not one of Trump's "closest advisors." Speaking on The 11th Hour with Brian Williams on August 9, DOJ veteran Neal Katyal said no one at Clark's level would normally have a direct channel to the president. That "never happens."

It's embarrassing to watch Grassley--who still postures as the champion of whistleblowers--search for any way to excuse Trump's authoritarian behavior. His unfailing loyalty to the former president, when he could be an elder statesman speaking truth to power, suggests that this senator does not plan to retire in 2022.

P.S.--Near the end of today's floor remarks, Grassley complained about what he characterized as Democrats violating Judiciary Committee rules and protocols. Anyone who refused to give Supreme Court nominee Merrick Garland a hearing for eight months has no credibility on matters of procedural norms.