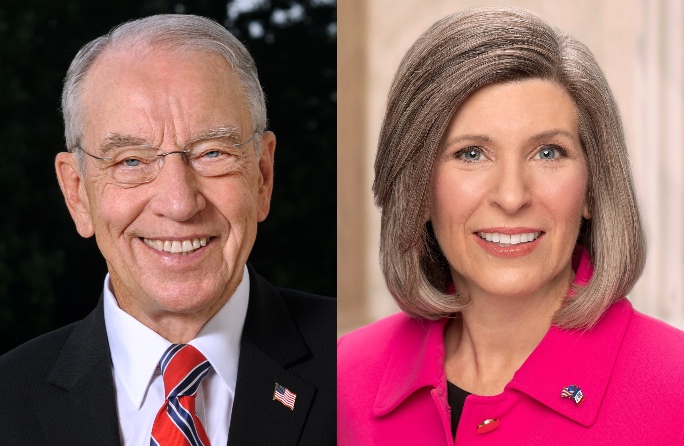 Can you guess which Iowa senator is up for re-election in 2022, and which one won't face Iowa voters for another five years?

In a rare gesture of bipartisanship on August 10, the U.S. Senate approved by 69 votes to 30 a bill that would spend $1.2 trillion on infrastructure projects. Iowa's senior Senator Chuck Grassley was among nineteen Republicans who supported final passage of the Infrastructure Investment and Jobs Act, despite being unhappy with the amendment process. Senator Joni Ernst stuck with the majority of the GOP caucus in opposition; the no votes included potential 2024 presidential candidates Marco Rubio and Ted Cruz.

In a written statement enclosed in full below, Grassley said, "Iowa’s aging infrastructure risks slowing economic growth and eroding daily comfort and convenience. This bipartisan bill fixes potholes, rebuilds bridges, upgrades water systems and brings broadband to rural corners of our state. Investing in Iowa’s infrastructure will pay dividends for decades to come." His news release highlighted reports showing Iowa has more structurally deficient bridges than any other state and many large roads in poor or fair condition.

The bill involves about $550 billion in spending not previously approved by Congress. Its large pieces include:

Ernst did not publish a statement on her website explaining her opposition to those projects, nor did she mention the infrastructure vote on her social media feeds. Instead, she bashed the $3.5 trillion budget reconciliation that Senate Democrats brought to the floor immediately after passing the infrastructure bill.

Ernst, in a statement, pointed to the Congressional Budget Office estimate that the bill would add $255 billion to the national deficit over a decade.

"Congress and the American people were promised an infrastructure bill that was fully paid for, but that's clearly not the case," Ernst said in her statement.

Ernst said she offered amendments to the infrastructure bill to help pay for the proposal, but they were voted down.

"While I certainly support improving America’s hard infrastructure — like our roads and bridges — I simply can’t support saddling more debt onto the shoulders of future generations of Iowans and opening the door for Bernie Sanders to ram through his multi-trillion dollar liberal tax-and-spending spree," she said.

House Speaker Nancy Pelosi has said the lower chamber won't take up the bipartisan bill until Senate Democrats have approved the larger spending bill, which will fund many "human infrastructure" programs relating to education, health care, and child care.

I anticipate that as federal funding finds its way to Iowa improvements in broadband or physical infrastructure, Ernst will want a bit of the reflected glory. If you hear the senator take credit for projects funded by the bill she voted against, please contact Laura Belin with details on her comments.

Final note: Transportation for America, a nonprofit advocating for infrastructure policies that prioritize maintenance and safety over new road construction, described the Senate-approved bill as a "historic investment in yesterday's transportation priorities."

There are certainly welcome new additions, including a major recalibration of the nation’s approach to investing in and running passenger rail and a small program to tear down divisive old highways. But with this deal, the Senate is largely doubling down on a dinosaur of a federal transportation program that’s produced a massive repair backlog we are no closer to addressing, roads that are killing a historic number of vulnerable travelers each year, little opportunity to reach work or essential services if a family doesn’t have multiple cars, and the continued inability for local governments to have a say over what projects are built in their communities.

The group said House members can improve on the bill by adopting language "requiring states to make progress on repairing their infrastructure before building expensive new things (in fact, this provision was applied to transit only), requiring measurable improvements in the number of people killed on our roads, measuring greenhouse gas emissions from the transportation system, and providing more money for removing or bridging over highways that were rammed through Black and Brown neighborhoods."

“Iowans have raised infrastructure concerns at nearly all of the 85 county meetings I’ve held so far this year, whether it be about roads and bridges, access to broadband or the locks and dams on the Mississippi River. Iowans rely on sound infrastructure to move our ag products and manufactured goods, as well as to connect with family, business partners and critical service providers. But like much of the country, Iowa’s aging infrastructure risks slowing economic growth and eroding daily comfort and convenience. This bipartisan bill fixes potholes, rebuilds bridges, upgrades water systems and brings broadband to rural corners of our state. Investing in Iowa’s infrastructure will pay dividends for decades to come.

“Like any compromise, this bill isn’t perfect and nobody got everything they wanted or likes everything in the bill, but this bipartisan package is a vast improvement over the House-passed infrastructure bill and a far cry from President Biden’s and Congressional Democrats’ partisan schemes to hike taxes and spend trillions on liberal pipedreams masqueraded as ‘human infrastructure.’ Our bipartisan package bundles several bills that have already won bipartisan action in the Senate, all without raising taxes on Iowa families. It’s proof that the Senate is fully capable of delivering on bipartisan policy when given the chance. It’s a shame my Democrat colleagues are still intent on following this bipartisan exercise with a partisan multi-trillion dollar reckless tax and spending spree, which I will oppose,” Grassley said.

Investment in traditional infrastructure not only improves our quality of life, but it also boosts economic growth over the long term. The Infrastructure Investment and Jobs Act repairs and upgrades Iowa’s critical infrastructure, paving the way for greater economic activity for years to come. Here are a few example of the bill’s impacts on Iowa.

Roughly 29 percent of Iowa’s major roads are in poor or mediocre condition, resulting in an estimated cost of $336 per year for each motorist, according to the American Society of Civil Engineers. This bill invests $4.2 billion in repairing Iowa’s roads, with the opportunity to compete for additional resources. The bill also includes a new grant program for rural transportation projects.

Iowa farmers, manufacturers, shippers and businesses rely heavily on our waterways to do business and move their goods. This legislation contains key Grassley provisions and priorities such as addressing the backlog for Operations and Maintenance and Investigation Accounts through the Army Corps of Engineers, allowing states to use federal highway funding for lock and dam modernization, helping complete studies from flooding, funding soil moisture and snowpack monitoring activities in the Upper Missouri River Basin to inform the lower basin of drought and flood conditions and funding Mississippi River and tributaries projects.

Iowa’s commercial and general aviation airports increase the productivity for private sector businesses and the agriculture industry. They also provide Iowans much needed connections across the nation and world. Under this bill, Iowa’s airports will benefit from increased funding for the Airport Improvement Program for runways, gates, and taxiways. The bill also creates a new Airport Terminal Improvement Program and improves the air traffic control infrastructure.

Thousands of Iowa households don’t have access to high-speed internet, which has proved indispensable for continuing education, conducting business and delivering health services during the pandemic. This bill provides $65 billion to increase access to broadband services, with a particular focus on unserved and underserved communities, including rural Iowa.

The Infrastructure Investment and Jobs Act represents a highlight reel of the Senate’s bipartisan work. It includes several bills that have already won bipartisan action in the Senate, including a must-pass highway bill to extend programs set to expire this fall.

Here are some examples: