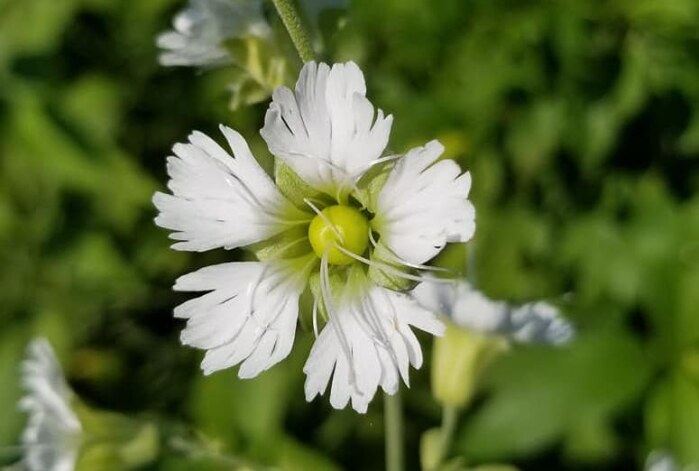 I usually visit Mike Delaney's Dallas County property to check out what's growing on the prairie he's been restoring for more than 25 years. But on my last visit, Mike pointed me toward an area in the woods where I could find some lovely wildflowers. I believe this was my first encounter with starry campion (Silene stellata) in bloom.

I took most of the pictures enclosed below on the wooded slope near Mike's prairie in late July.

Before flowers appear, starry campion plants can be identified from the whorls of four leaves around the stem. 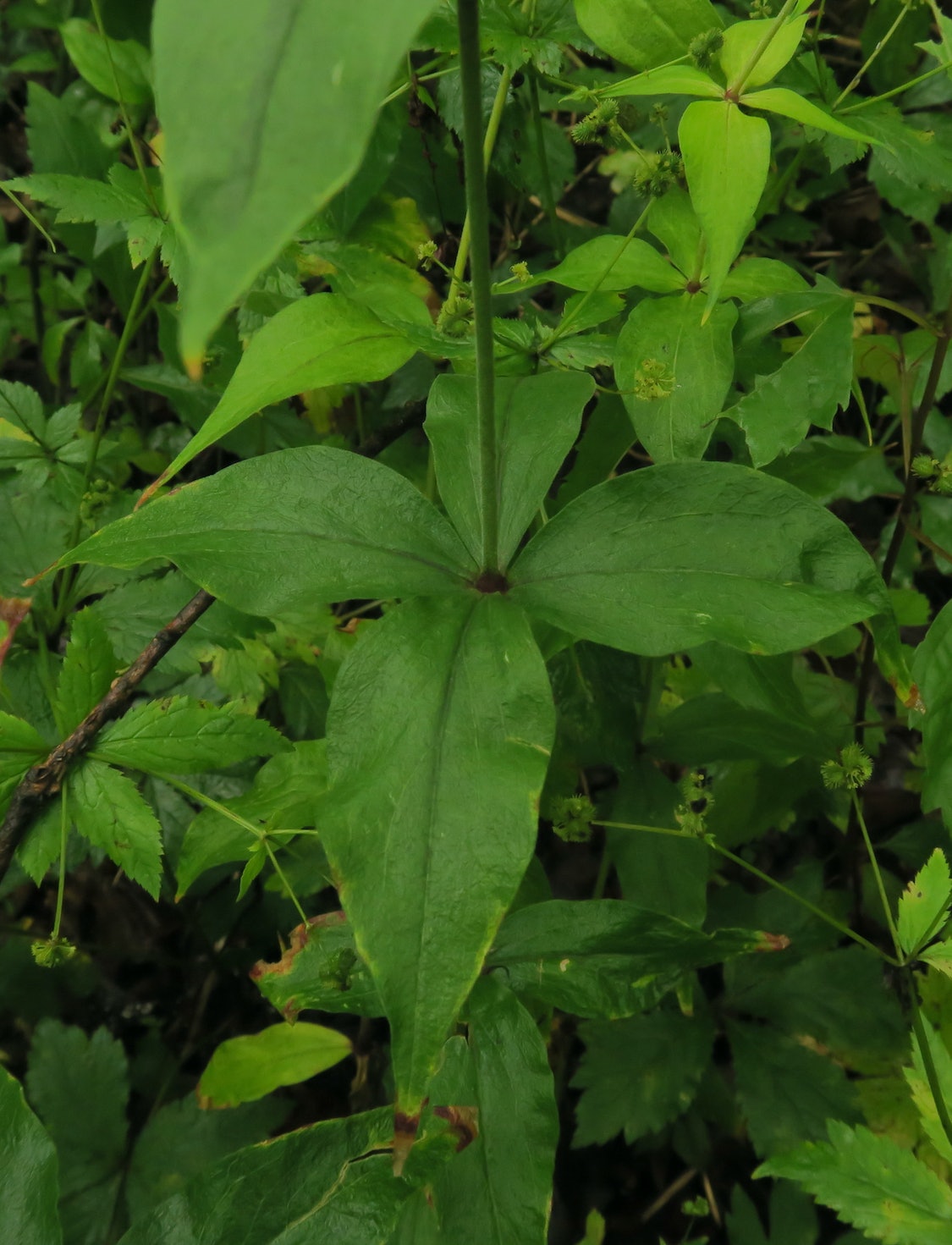 Near the bottom and top of the stem, the leaves appear "in opposite pairs," Minnesota Wildflowers notes. In addition, "The leaf node is often swollen and tinged red." The reddish area where the leaves meet the stem is more visible in this photograph. 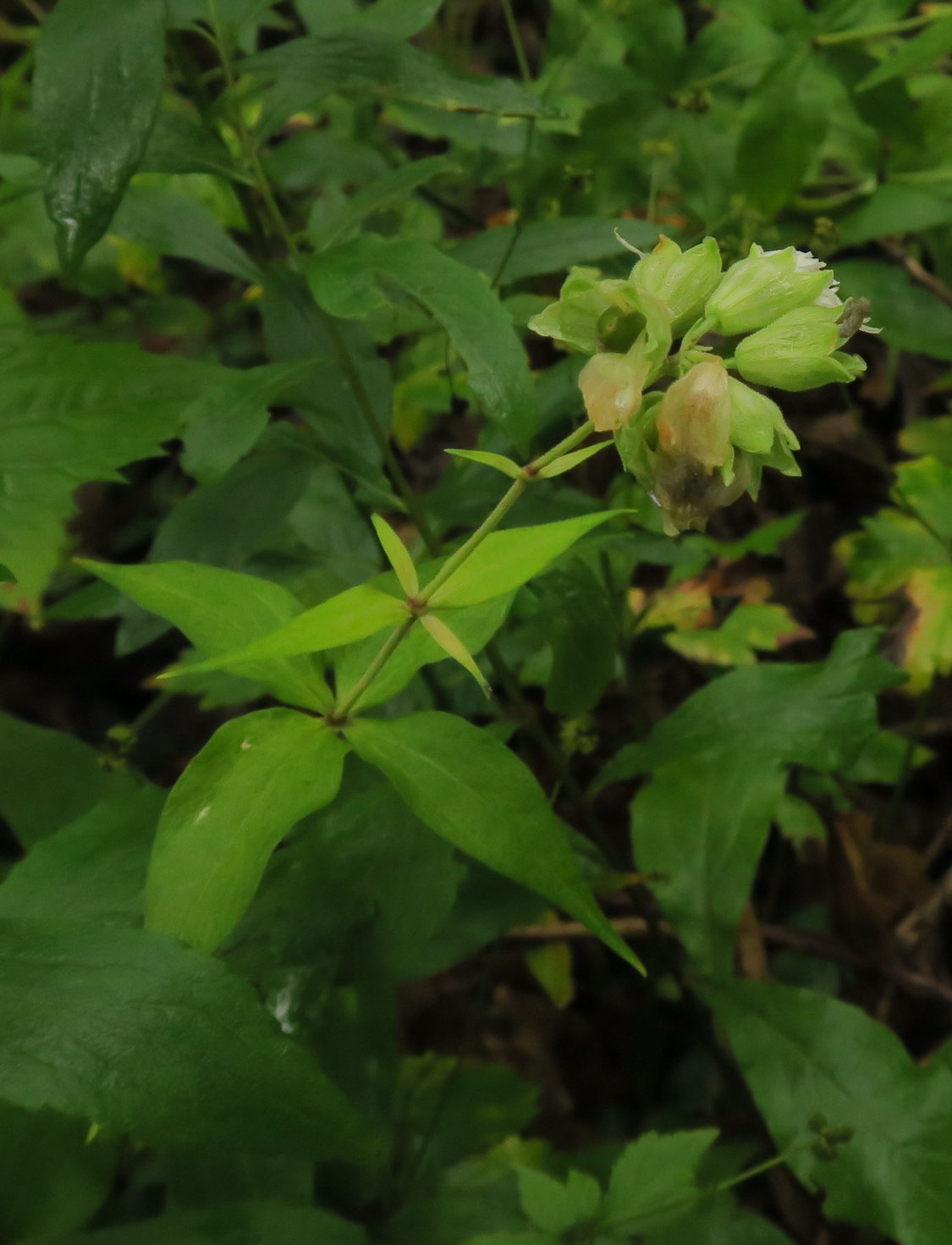 Because I was late to the party, I didn't catch Mike's colony of starry campion when they were starting to bloom. Lora Conrad gave me permission to publish one of her photographs from southeast Iowa, showing a plant with one flower opening and several buds not far behind. Note the light green, bell-shaped calyx, which appears veined. 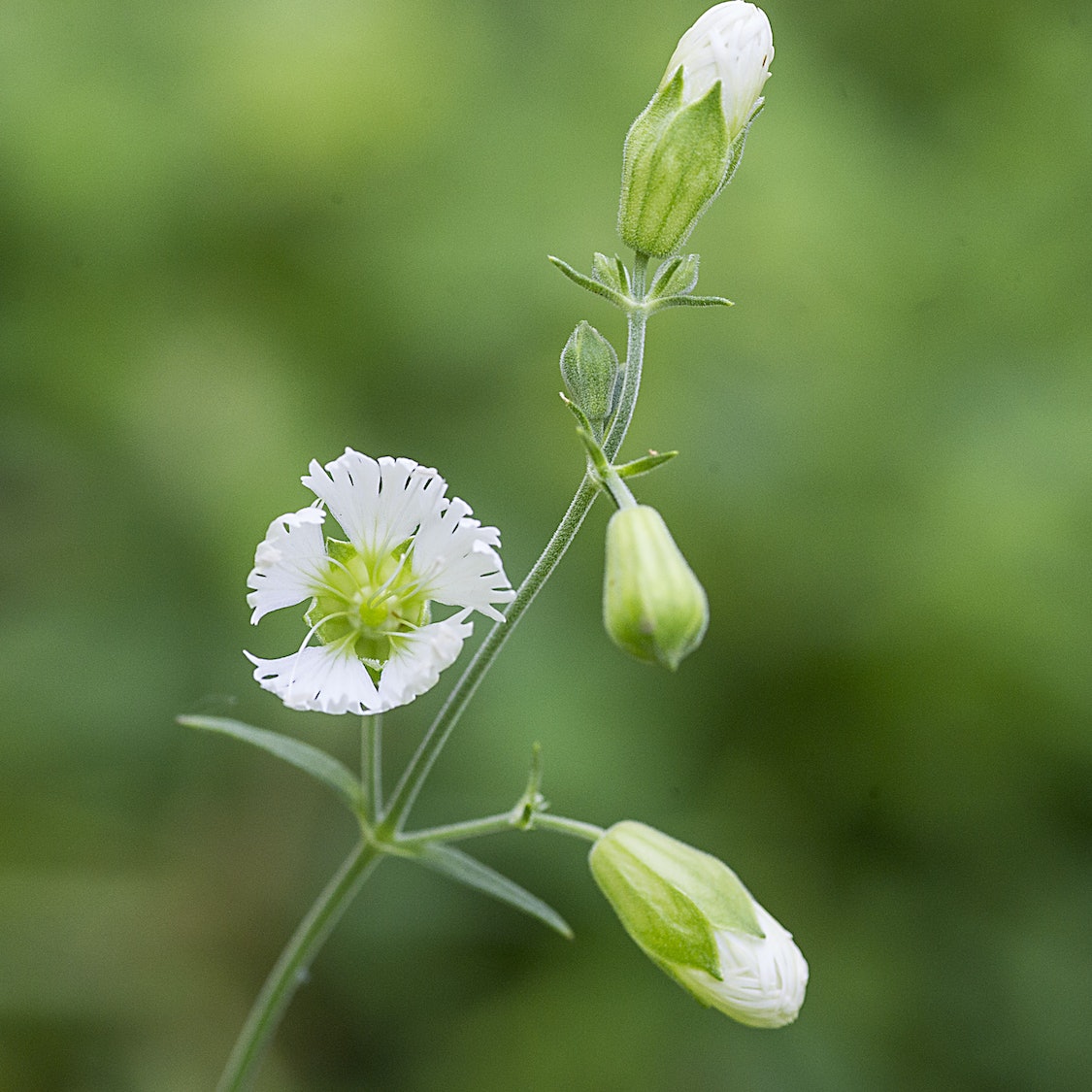 Katie Byerly took the next three photographs at various locations in northeast Iowa. You can see the easiest way to identify starry campion: "petals deeply divided into several lobes giving it a frilly appearance." 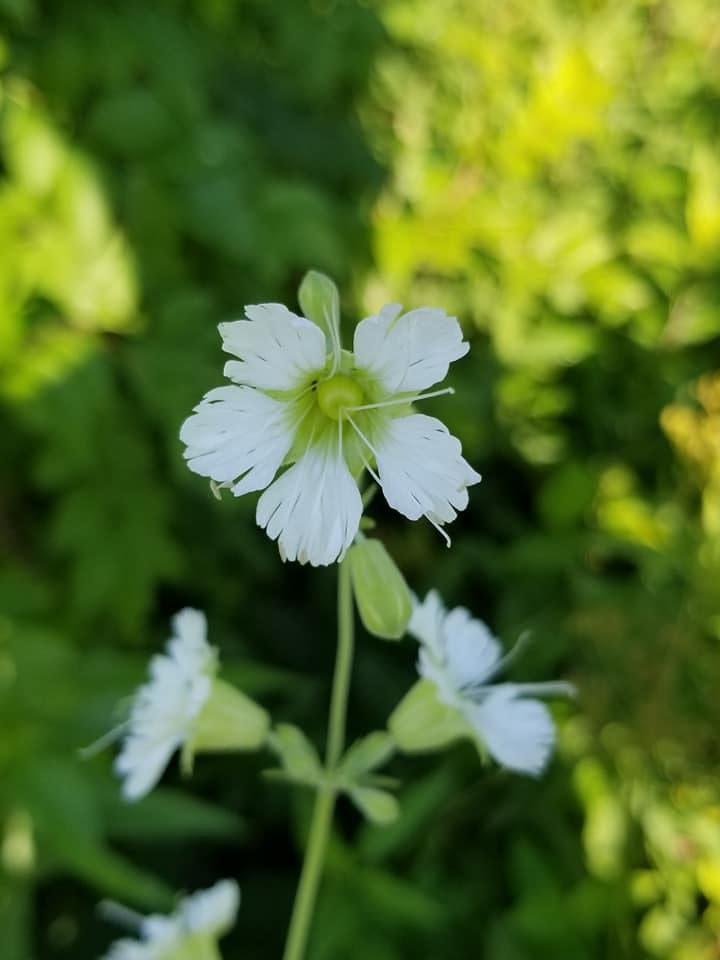 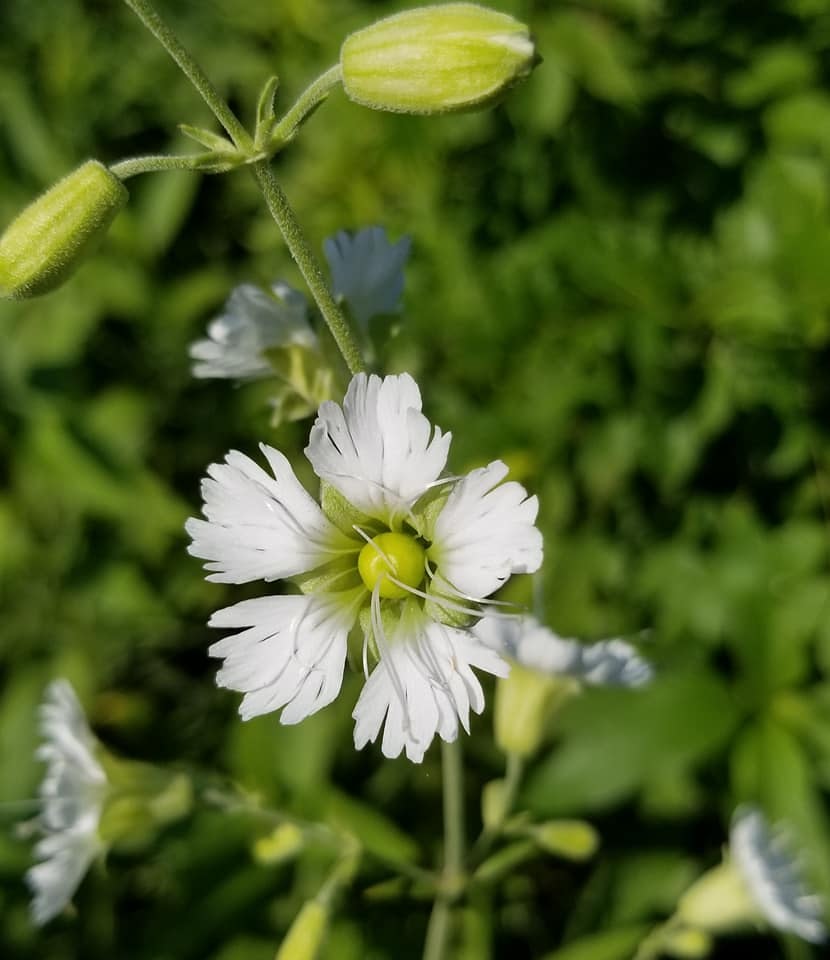 Back to my photographs from Mike Delaney's woods. The flowers looked a little battered that morning, following heavy rainfall overnight. 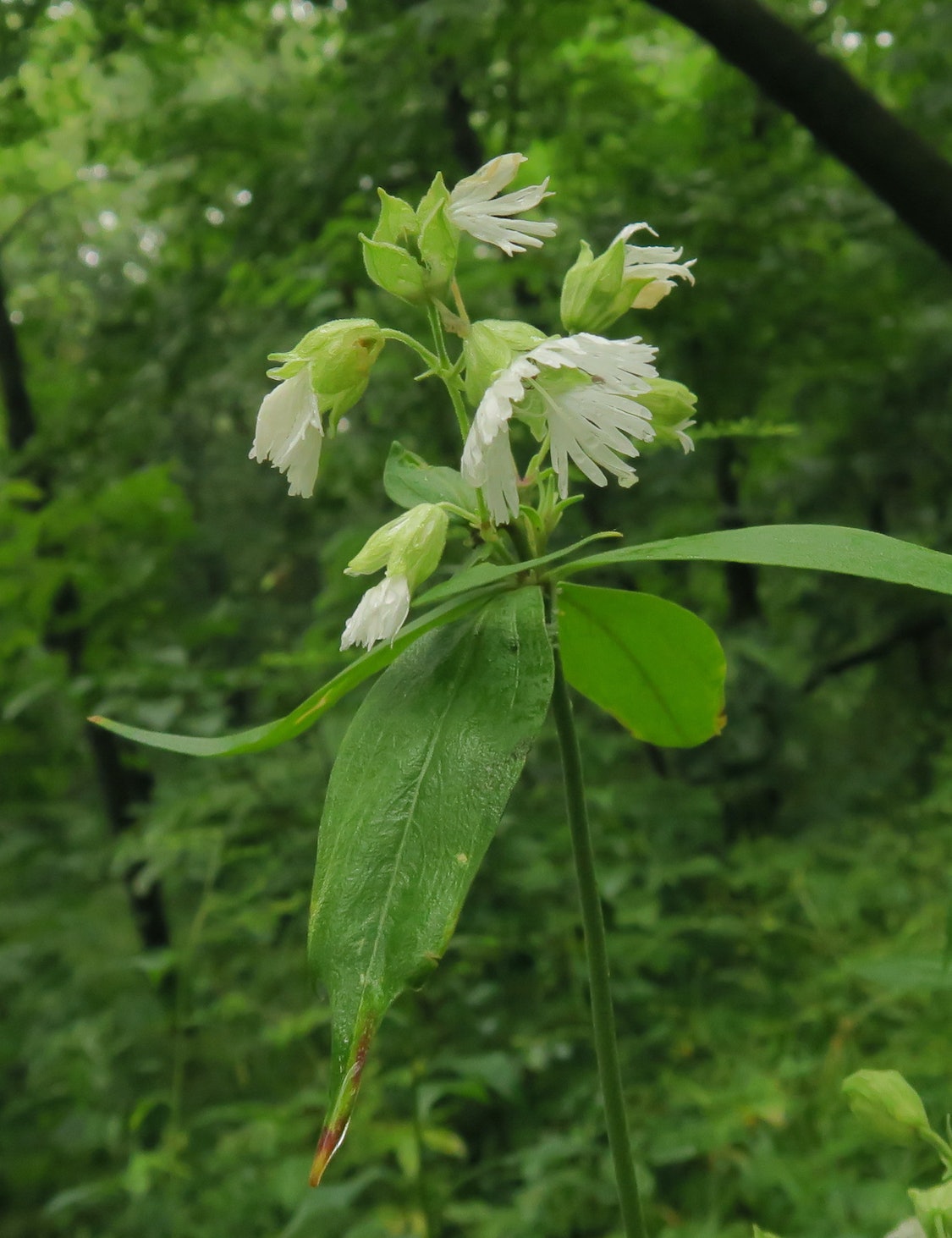 Most of the flowers were past their prime. 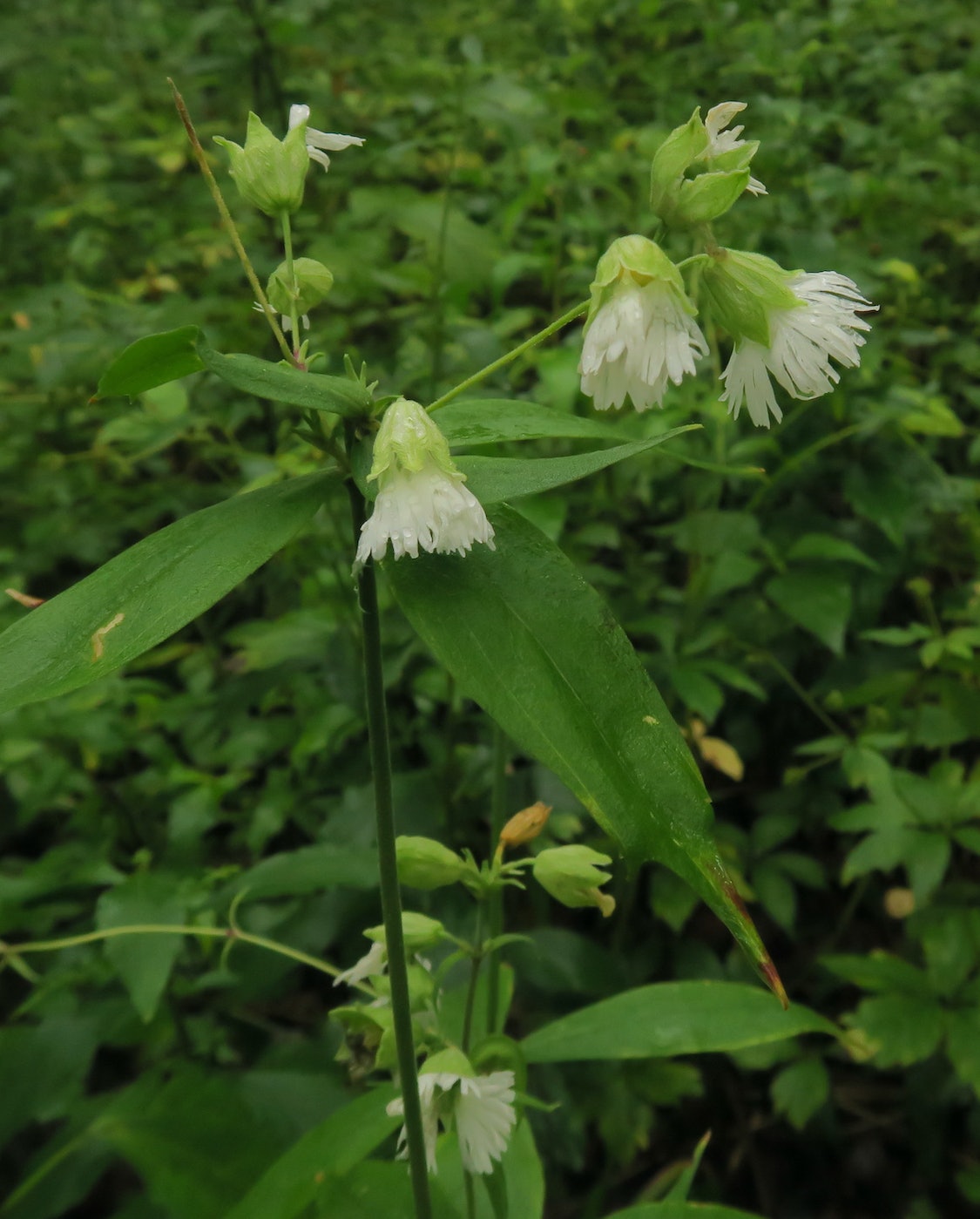 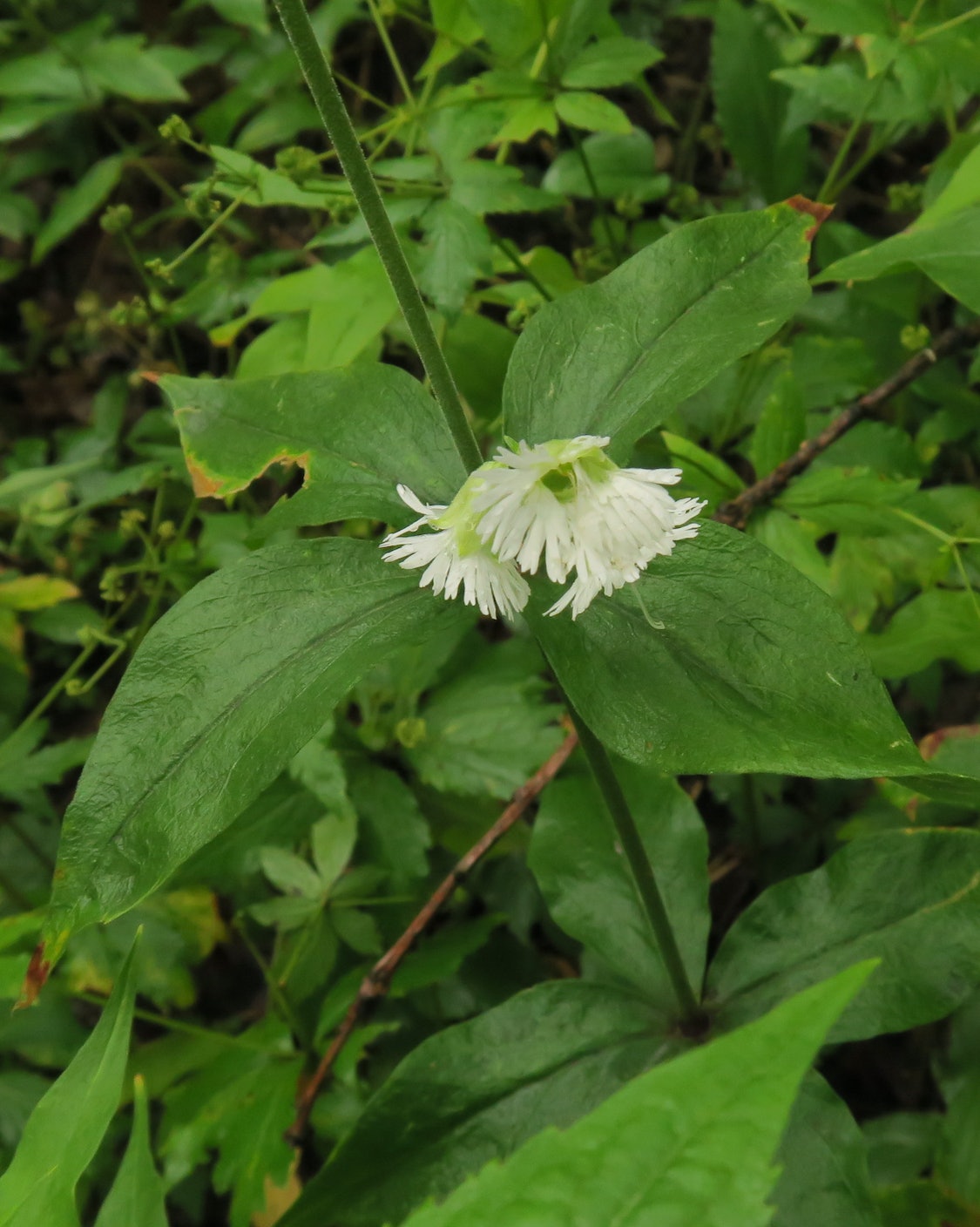 A view of starry campion flowers from behind. I think the other foliage and burs you can see in this image are part of common black snakeroot plants. 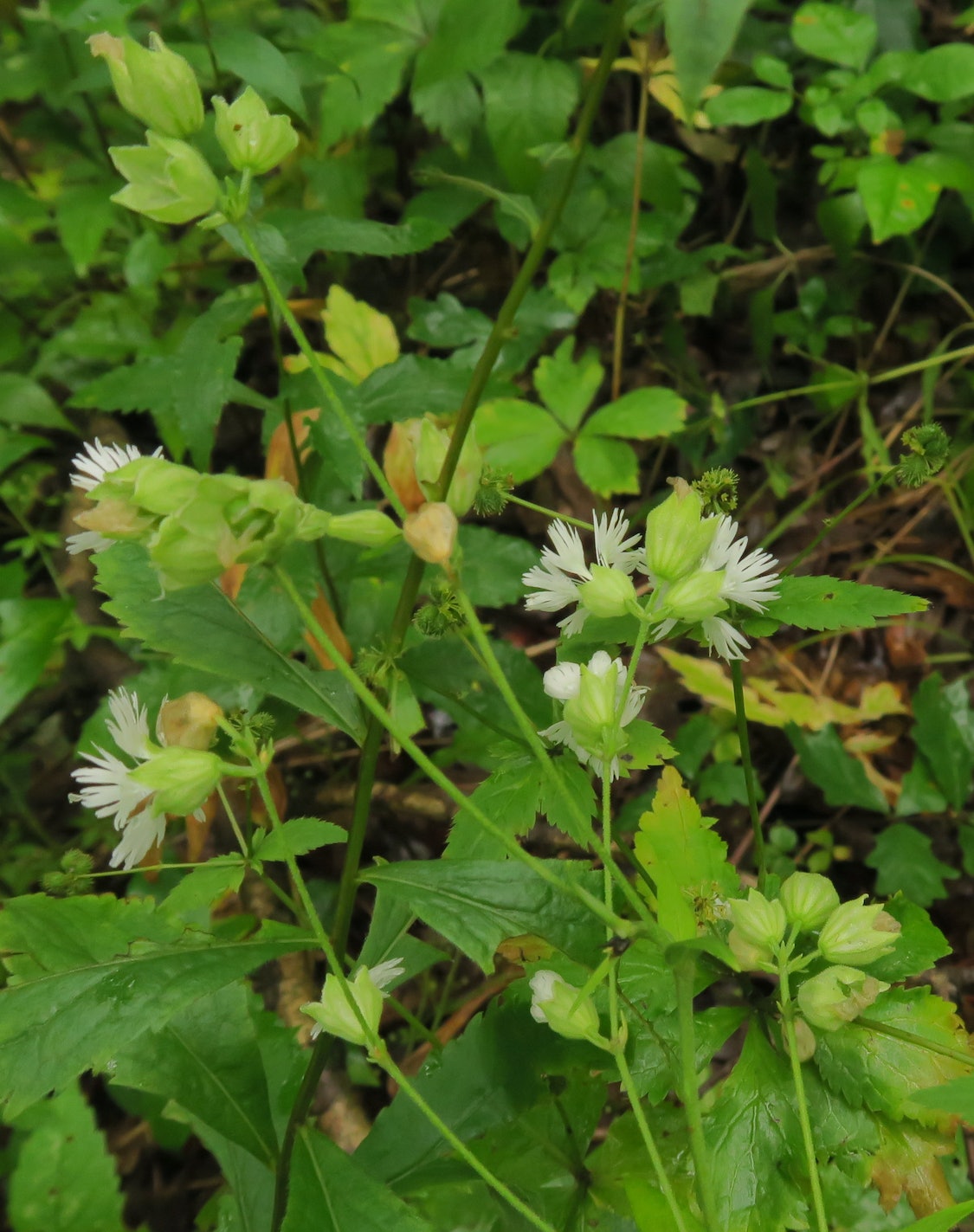 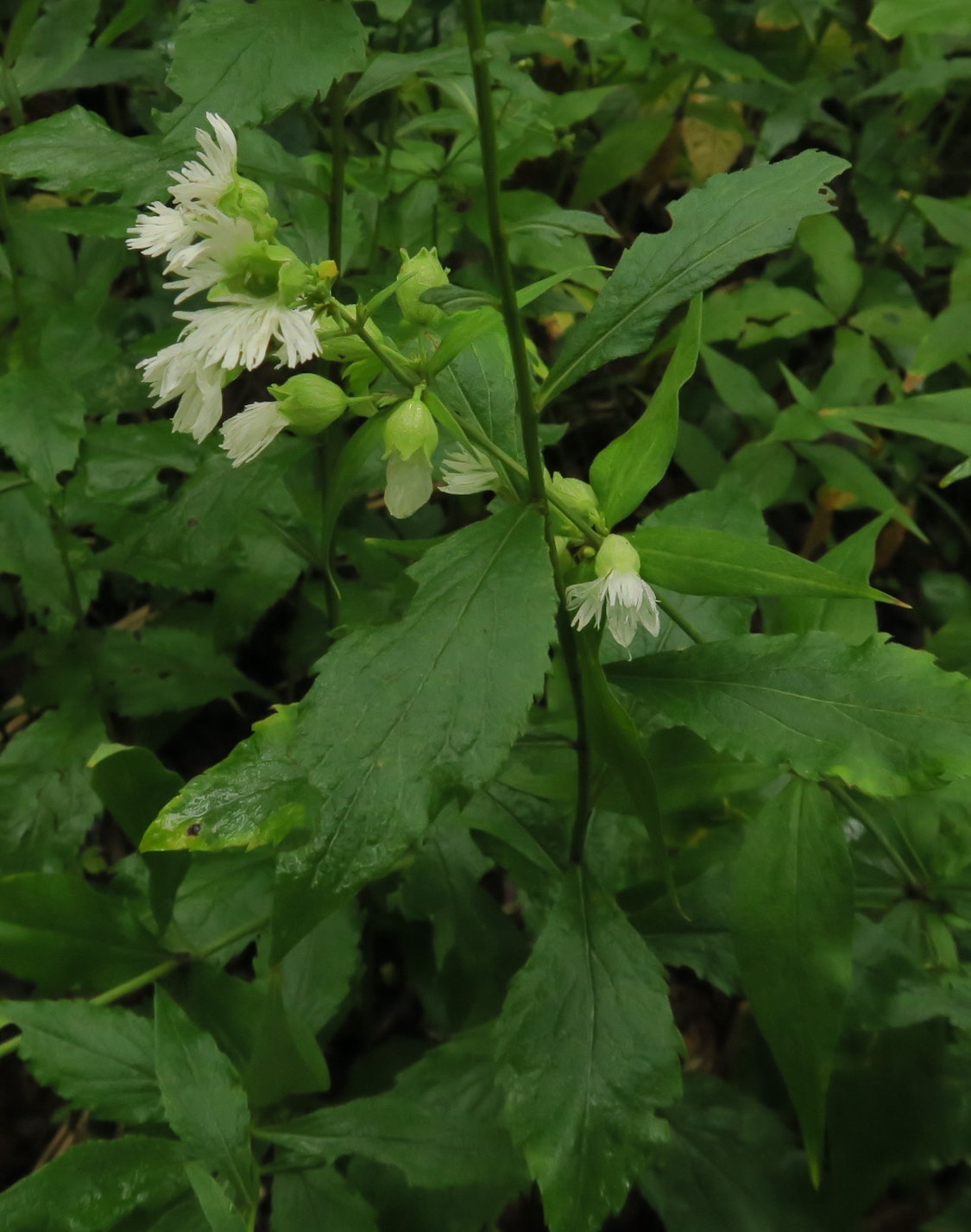 Minnesota Wildflowers writes, "As fruit develops, the calyx inflates and spreads out, becoming nearly triangular in outline." I tried to get a glimpse of the developing fruit. 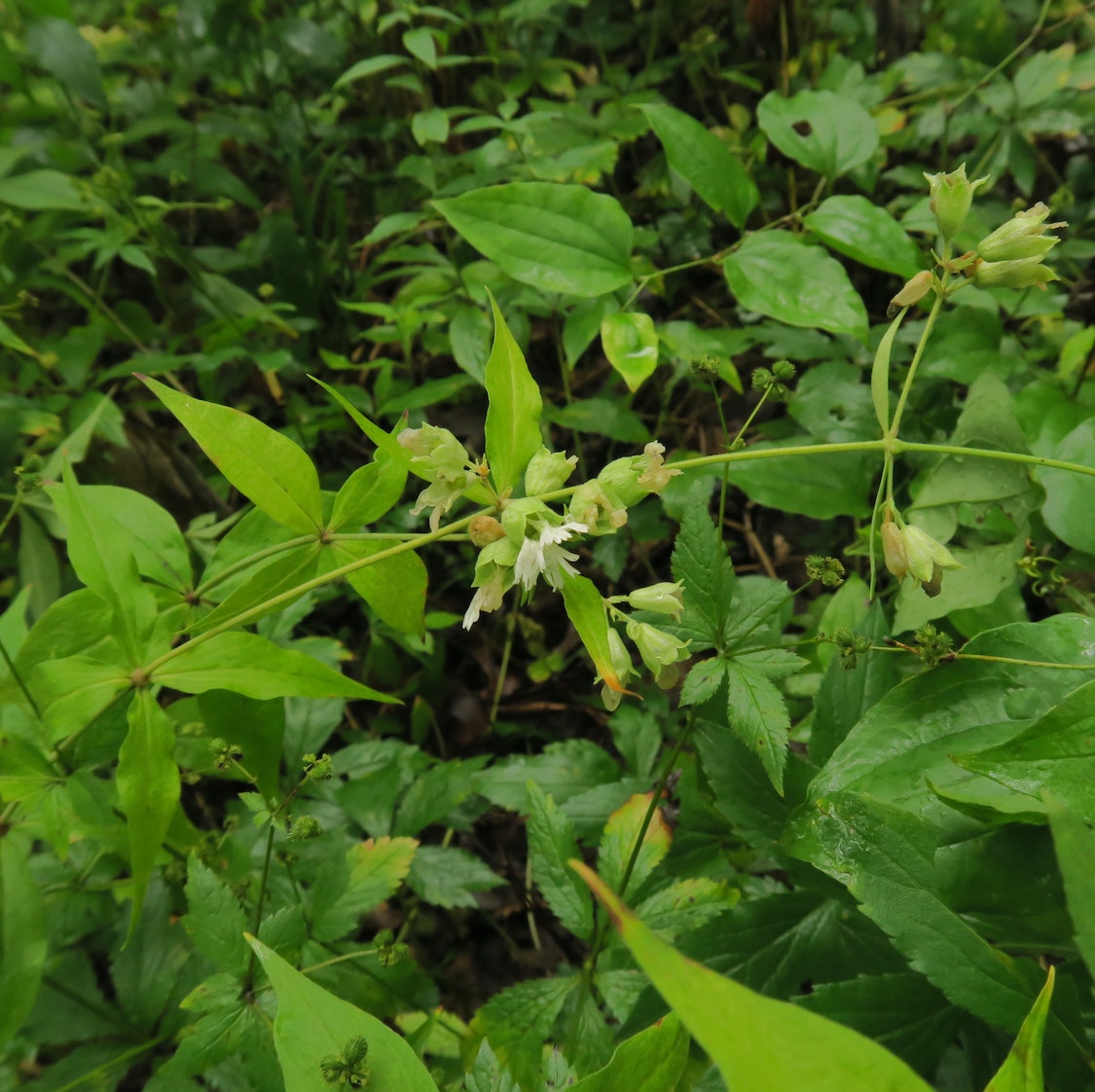 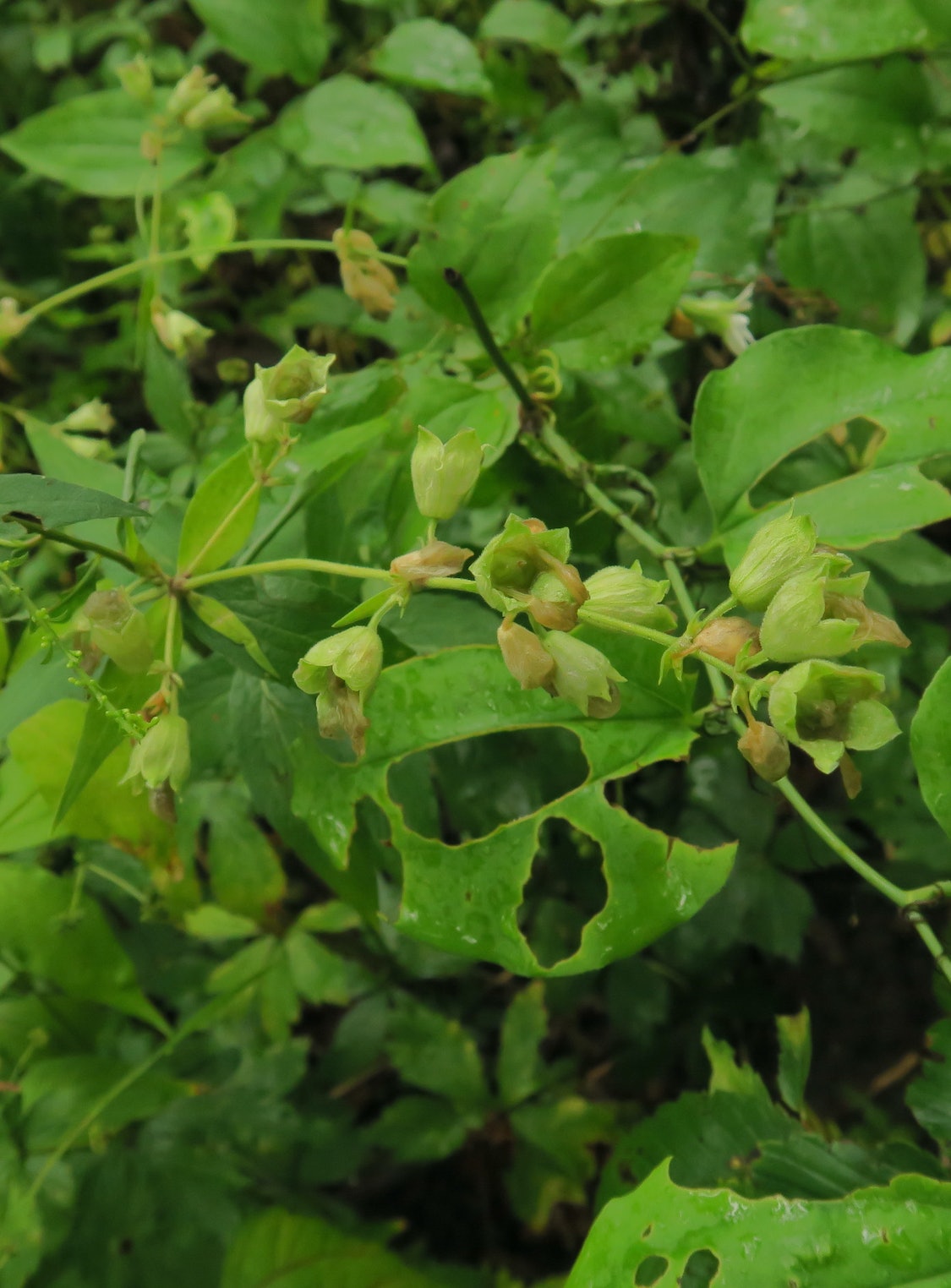