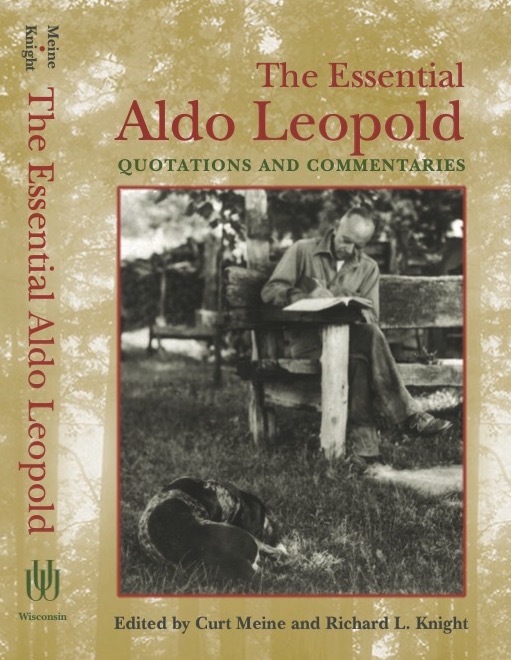 Traveling in the Right Direction

The late Paul W. Johnson wrote the following essay as an introduction to Chapter Five of "The Essential Aldo Leopold: Quotations and Commentaries," C. Meine and R. Knight, eds., University of Wisconsin Press, 1999. It is reproduced here with permission of the UW Press and Curt Meine. Paul was a staunch advocate of land use policies which served people and conserved natural resources. During his career, he served as an Iowa state legislator from Decorah, chief of the USDA Natural Resources Conservation Service, and director of the Iowa Department of Natural Resources.

The need to conserve soil and water seems obvious today. It was not always so. When Aldo Leopold began his conservation career with the US Forest Service, our nation was on a destructive rampage. Forests and croplands were thought to exist in limitless supply. Rangelands were considered useful only to the extent that they could support livestock grazing; range health was not an issue. Wetlands were considered wastelands. Surface waters were treated as sewers. Meandering streams were deemed too slow and inefficient, and wild rivers needed to be harnessed “for the good of mankind.”

Aldo Leopold was not the first to see that all was not well with our national attitude toward land. In 1864, George Perkins Marsh warned that the process of settlement should not “derange or destroy what ... it is beyond the power of man to rectify or restore.” In the 1870s, John Wesley Powell argued for a watershed-based approach to development in the West, even as the federal surveyors were laying the range-and-township grid across it. Theodore Roosevelt and Gifford Pinchot ushered in the Progressive conservation movement and the forestry revolution. John Muir waged many a campaign for wild parklands before losing the epic battle against construction of the Hetch Hetchy dam at Yosemite.

In Aldo Leopold’s day, Hugh Hammond Bennett was warning of the “national menace” that soil erosion posed. Leopold was not a soil scientist, but he was an early proponent of soil conservation, and his contributions continue to guide our efforts today. Leopold’s interest in this aspect of conservation dates to his early days in the Forest Service. In 1920, while on assignment in Arizona’s Prescott National Forest, Leopold wrote offhandedly to his mother, “I have a new hobby. I am seriously thinking of specializing in erosion control. The problem is perfectly tremendous here in the Southwest, and I seem to be the only one who has any faith in the possibilities of tackling it successfully.” Leopold went on to prepare in 1923 the Forest Service’s first manual on erosion control. Many of his conservation essays from this period—and over the rest of his life—focused on the impacts of poor land use on soil and water.

In the United States, the first concerted national effort to address the problem of soil erosion on private lands came in 1933 with establishment of the Soil Erosion Service. Among the Service’s first acts was the establishment of watershed demonstration projects at twenty sites across the country. The very first of these was at Coon Valley in southwestern Wisconsin. Aldo Leopold was immediately enlisted as a technical advisor. He saw at Coon Valley the opportunity—and the need—to conserve all the area's natural values; not only the agricultural soils and waters, but the forests, fish, wildlife, and scenery. In a 1935 essay on Coon Valley he stated, “The crux of the land problem is to show that integrated use is possible on private farms, and that such integration is mutually advantageous to both the owner and the public.” This comprehensive approach to conservation set a powerful example for the fledgling agency.

Soon after the watershed projects began, Secretary of Interior Harold Ickes stripped the projects of their wildlife conservation component (a result, probably, of inter-agency squabbling). Aldo Leopold swung into action, encouraging other conservation leaders to voice their support for the more comprehensive approach to conservation. Secretary Ickes backtracked.  Thus did the Soil Erosion Service—and its successor, the Soil Conservation Service—assume from the beginning a comprehensive mission. They were to assist landowners in conserving land in Leopold’s full sense of the word: “the soil, water, plants, animals, and people.”

Leopold’s ideas about land and our relationship to it developed over his entire lifetime. He came to recognize that conservation involved far more than acquisition and preservation of public lands. As he worked toward definition of his land ethic, he focused increasingly on the role of the individual landowner. In an early version of his 1939 essay “The Farmer as a Conservationist,” he defined conservation as a state of harmony between people and land. “When the land does well for its owner and the owner does well by his land—when both end up better by reason of their partnership—then we have conservation. When one or the other grows poorer, either in substance, or in character, or in responsiveness to sun, wind, and rain, then we have something else, and it is something we do not like.”

Unfortunately, as Leopold’s concept of land broadened, our nation’s soil and water conservation efforts did not. In the decades following his death we became enamored of engineering fixes. Conservation in the private sector focused on protecting and maximizing the land’s capacity to produce food and fiber commodities. We came to view soil and water merely as basic production inputs, to be shoved around and shaped to achieve short-term individual economic goals. Efforts to integrate human land use activities within the larger community of life were marginal at best.

This is not to say that our soil and water conservation actions since Coon Valley have been undertaken in vain. Quite the contrary. Our landscapes are much healthier today than they would have been otherwise. Erosion rates have been significantly reduced. Farms that stood on the brink of abandonment in the 1930s are once again producing bumper crops. But it is now time to take the next step in soil and water conservation. It is time to catch up with the thinking of Leopold and his colleagues from fifty years ago. This, I think, is beginning. We are seeing the first stirrings, perhaps, of a new conservation era.

In 1994 our nation took an important step toward formal recognition of land in Leopold's sense when the Soil Conservation Service was rechristened the Natural Resources Conservation Service. The 1996 Farm Bill provided a host of new resources to advance private land conservation, including support for whole-farm planning; enhanced programs for agricultural wetlands restoration; farmland protection easements; wildlife habitat restoration incentives; payments for vegetative buffers, with an emphasis on native species; and assistance for more holistic management of grazing lands. The Soil Conservation Service has not gone away. Its name may have as changed, but it will always focus strongly on soils.  And meanwhile, thanks in part to Aldo Leopold, it has found it roots again and is returning to a more comprehensive approach to land conservation.

Where will the legacy of Leopold and Bennett lead us in the future? First, our concept of soil and soil conservation must continue to mature. Soil is more than just sands, silts, and clays. It is a living system. It serves multiple functions. It is a filter and a buffer; it partitions water; it stores and releases carbon; it processes nitrogen and a host of other nutrients; it serves as home for a great diversity of life. As Wendell Berry has reminded us, soil is the place where death becomes life again. Leopold called it our “basic natural resource.”

Despite the fundamental importance of soil, we still show little respect for it. Our nation has adopted all manner of resource protection acts—a Clean Water Act, a Safe Drinking Water Act, a Clean Air Act, an Endangered Species Act. Yet we as citizens have assumed almost no responsibility for the protection of our soils. Is it time to develop a national soil quality act that would initiate an effort to define soil health and our responsibility to protect and enhance it? I think so—if our political leaders can somehow develop the will to address our individual and collective responsibilities for soil quality. Were Leopold here today, he would no doubt contribute to the national debate. At the very least he would see in the process a much-needed educational effort.

We are making more rapid progress in water conservation through our state and national laws, and through the dialogue that accompanies such legislative efforts. We have developed in the last generation a greater respect for rivers and streams, and are taking our first steps toward working with them rather than forcing them into concrete chutes. We have begun to recognize the value of wetlands, both for the important role they play in hydrologic processes and as places rich in life. Although drainage will no doubt continue on our best agricultural lands, there is no excuse for wiping the landscape dry. Natural wetlands should be part of agricultural landscapes as well as wilderness landscapes.

Perhaps we are finally coming to see water, if not yet soil, as part of Leopold’s comprehensive conservation vision. “Conservation is a state of health in the land,” Leopold wrote in his essay “Conservation: In Whole or in Part.” “The land consists of soil, water, plants, and animals, but health is more than a sufficiency of these components. It is a state of vigorous self-renewal in each of them, and in all collectively.”

In the autumn of 1995, while serving as Chief of the Natural Resources Conservation Service, I slipped out of Washington with a handful of my agency leadership for a weekend at the Leopold family’s "shack" in Wisconsin. There we walked the land, read from A Sand County Almanac, and reflected on the previous sixty years of land conservation in America. The air that weekend was crisp, the silence broken periodically by the sound of Canada geese overhead and in the nearby marsh. At one point as we walked, we all stopped at a sandy opening in an oak savannah. Using a stick we sketched out a vision for private land conservation that we eventually brought forward in the 1996 NRCS publication America’s Private Land: A Geography of Hope.

America’s Private Land calls upon us to rededicate our efforts to conserve the land. We ended that publication with a challenge for our nation to “achieve an added measure of that state of harmony between people and land” that Leopold called conservation. “We can no longer be satisfied with slowing erosion, water pollution, and other forms of land degradation. Harmony will demand that we set our sights higher—to improve the land upon which our destiny rests by restoring those places that are damaged, by enhancing those places whose condition is merely adequate, and by protecting those areas that remain pristine.”

It is fashionable to be discouraged about conservation these days. We shouldn’t be. The Soil Erosion Service ... the Soil Conservation Service ... the Natural Resources Conservation Service. We have quite a legacy to build upon. As Leopold wrote in his 1947 essay “The Ecological Conscience,” “I have no illusions about the speed or accuracy with which an ecological conscience can become functional.  ... In such matters we should not worry too much about anything except the direction in which we travel.” We are traveling in the right direction.