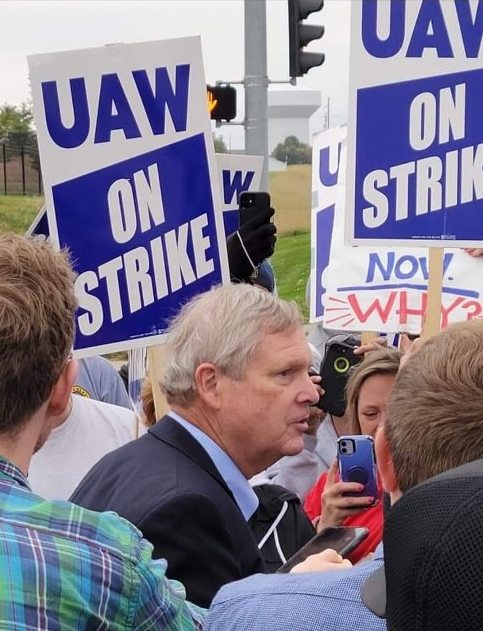 U.S. Secretary of Agriculture Tom Vilsack stopped by the United Auto Workers picket line in Ankeny on October 20 to express support for John Deere workers who have been on strike since October 14. He is the first cabinet secretary in recent memory to join union members on a picket line.

While speaking to the workers, Vilsack recalled how important the UAW's support was to his first gubernatorial bid in 1998. Backing from organized labor helped him win the Democratic primary by less than a 3-point margin. He then came from behind to defeat Republican nominee Jim Ross Lightfoot by a little less than 6 points in the general election. "You don't forget the people who gave you an opportunity to serve. You just don't."

Regarding the issues that prompted the strike, Vilsack told the UAW members,

You folks are hard-working folks. You provide a tremendous product. It’s one that rural America relies on, our farmers, our ranchers, our producers …. And it’s important and necessary for this issue to get resolved in a way that’s fair and equitable to all of you. Because you work hard, you deserve a fair price, a fair deal.

So I just wanted to stop by and let you know that I haven’t forgotten you.

Vilsack said earlier in the day, someone had asked him what the strike was about.

For far too long in this country, we haven't paid as much attention and respect to people who work with their hands, who build and who construct and make.

The secretary told reporters, “John Deere’s a great company. They ought to be able to get this worked out to a point where it’s fair to the workers, to make sure that we continue to have the equipment and farm machinery that’s important to American agriculture.”

You can watch Vilsack's visit in its entirety on this Iowa Starting Line video, but it's sometimes hard to hear his words due to passing drivers honking their horns in solidarity with the UAW. According to Linh Ta of Axios Des Moines, Vilsack said the Biden administration is willing to talk with John Deere's CEO "to get the strike resolved."

Asked about the strike during an October 20 news conference, Governor Kim Reynolds described Deere as "a great company with a phenomenal workforce" and expressed hope that "we can find resolution sooner rather than later." She added that her father, grandfather, and other family members worked for the company, and "It was a stressful time when they would go on strike."