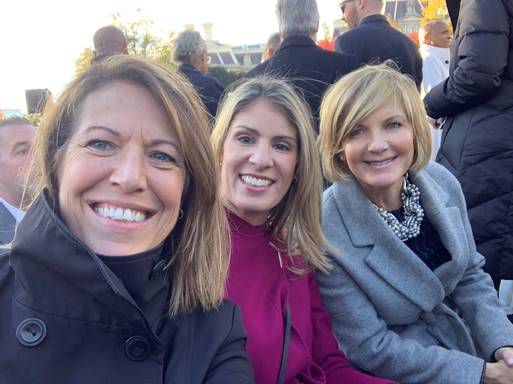 President Joe Biden signed the bipartisan infrastructure bill on November 15. The reaction from Iowa's two members of Congress who voted for the measure could not have been more different.

U.S. Representative Cindy Axne, the lone Democrat in Iowa's delegation, was eager to spread the word about the bill. She tweeted photos from the signing ceremony and again highlighted how an estimated $5 billion will be spent to improve Iowa roads, bridges, water infrastructure, public transportation, airports, and broadband.

The largest investment in U.S. history for both rural broadband AND clean drinking water is now law!

The largest investment in bridges in nearly a century is now law!

And we’re making these investments without raising Iowans’ taxes. https://t.co/Jo3S1OPIan

She spoke on local television about how the spending would create jobs and used her social media to underscore how infrastructure spending would boost local economic development.

What's in the bipartisan infrastructure legislation that was just signed into law?

All of the above would have been considered typical behavior for members of Congress for many decades. Bring money back to your constituents, and don't be shy about telling them what you delivered.

The bipartisan infrastructure bill (and the larger Build Back Better Act, if it gets through the Senate) will be major themes of Axne's re-election campaign in Iowa's third district. That may not be the case for Senator Chuck Grassley.

FROM "DELIVERING FOR IOWA" TO RADIO SILENCE

Grassley was among nineteen Senate Republicans who supported the bipartisan infrastructure bill in August. Immediately after that vote, his office bragged about "delivering for Iowa" and listed key points of the compromise. An August news release designed to dispel "myths" about the legislation made the following points:

Facts:This bill is 100% infrastructure-related spending. Unlike President Biden’s initial proposal or the Democrats’ current $4.2 trillion wish list, this bill is hard infrastructure and does not include social programs or non-traditional infrastructure. This package is $558 billion of new infrastructure spending, combined with money that will continue to be collected and dedicated to existing infrastructure projects under current law. The new spending includes:

This chart illustrates the bipartisan bill's focus on real infrastructure. 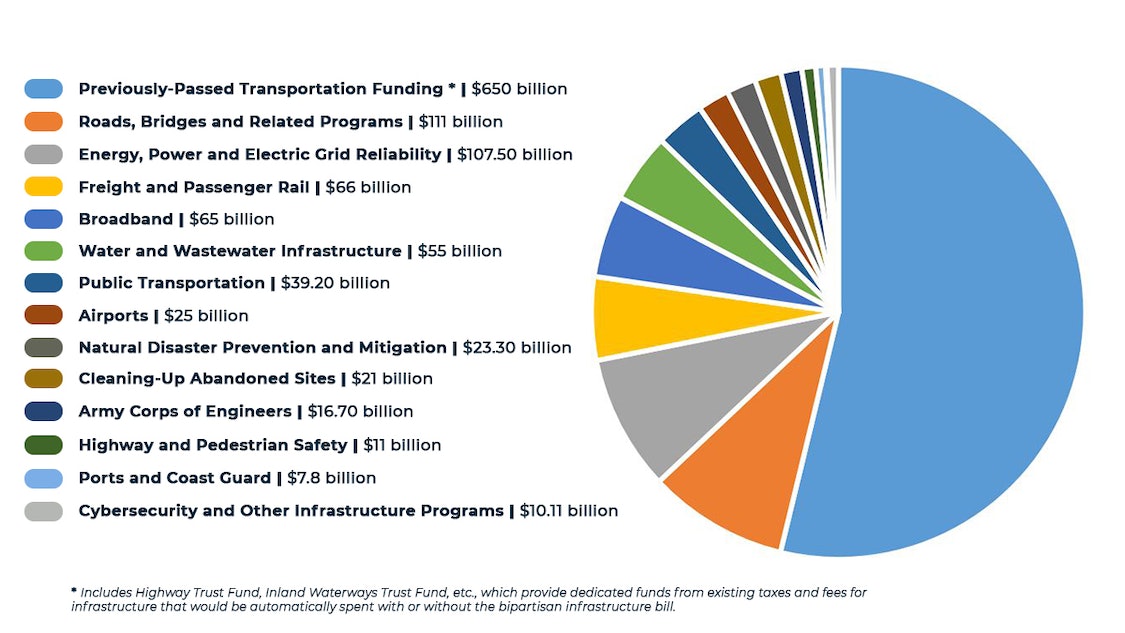 More recently, Grassley seems to have given up on selling the bill to Iowans. He skipped last Monday's White House ceremony and did not mention the infrastructure legislation on his otherwise active social media feeds. On the day of the bill signing, Grassley tweeted about meeting with constituents, visiting high school students, and college interns, and posted a "Stop Socialism. Save America" meme on Facebook.

In fact, Grassley didn't discuss infrastructure spending in any of his three dozen tweets last week. His political Facebook page published numerous posts criticizing Democratic policies. The only mention of the infrastructure bill was a link to a Quad-City Times editorial praising the legislation.

The senator's only official statement about the infrastructure bill was buried in the "Capitol Hill Report," an audio file his staff puts out weekly. In that "unrehearsed interview" with two Iowa journalists, Dennis Morris of KLEM Radio in Le Mars asked the senator about "confusion" surrounding the infrastructure measure, saying he had heard people compare it to "Obamacare" and claim "it was passed before anybody knew what was in the bill."

Grassley replied that half of the planned spending "is money that would have been spent through the normal appropriation process anyway" through gas taxes, so "there's no surprise." He added that "100 percent of it is infrastructure," and noted 23 percent of Iowa bridges are structurally deficient. "Nobody wants to be going over an unsafe bridge." He posited that people were confused because the Biden administration initially put money for roads and bridges in the same bill as "a whole bunch of social programs." He said the Senate "shut down" tying those two bills together.

For whatever reason, Grassley doesn't want to be loud and proud making that case to constituents. Perhaps he's aware that he's lost ground with the hard-core Republican base. Some who attended former President Donald Trump's latest rally in Des Moines booed the senator. The latest Iowa Poll by Selzer & Co for the Des Moines Register and Mediacom found that Grassley and Senator Joni Ernst have the same job approval numbers (45 percent approve, 41 percent disapprove, 13 percent are unsure). But Ernst did better among Republican respondents, with 80 percent approval to 71 percent for Grassley.

When Grassley voted for the infrastructure bill, I assumed his role in delivering federal dollars for roads, bridges, and broadband would figure prominently in the television commercials that will blanket Iowa airwaves next fall. Judging by his behavior this past week, he may have concluded that the less said about this spending, the better.

UPDATE: Grassley defended his infrastructure vote when asked about it during a November 17 press call with some Iowa reporters. And on November 22 he posted an Instagram video about the issue: "This bridge in Black Hawk County is closed because it needs to be upgraded. The bipartisan infrastructure bill will give badly needed investment to Iowa’s structurally deficient bridges."

“We got notice either late Friday or Saturday, I don’t think it was as late as Sunday, that I was invited and we already had my schedule for Monday set up,” Grassley says. “I had meetings with Iowans and I don’t like to cancel meetings with Iowans, particularly for what would be considered a photo op.”

That doesn't explain why he didn't mention the bill last week on his Twitter or official Facebook page, or in any news release.