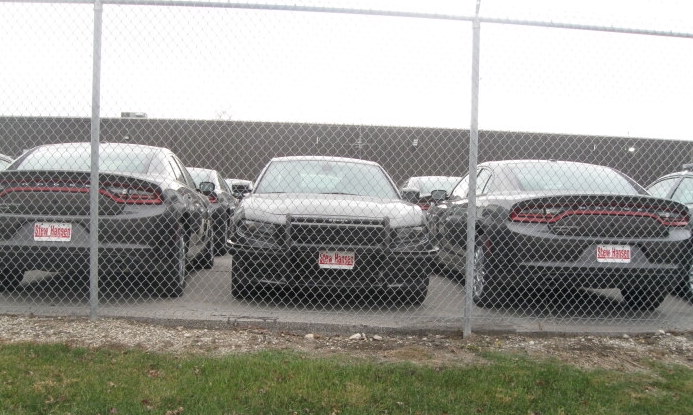 John Morrissey is a freelance writer in Des Moines.

Iowa State Trooper Ted Benda, who died of injuries suffered in a single-vehicle crash on October 14, had been driving a vehicle rated by a national standards organization as having poor-performing headlights.

A common cause of law enforcement officer deaths

Benda's late-night crash exemplifies a common workplace hazard for law enforcement. Vehicle accidents were the third leading cause of on-the-job deaths for law enforcement officials in the U.S. over the past decade, according to the National Law Enforcement Officers Memorial Fund. The organization serves as a clearinghouse for information and statistics about line-of-duty fatalities, and also hosts a national database of programs that promote police officer safety and wellness.

Vehicle accidents ended 311 law enforcement lives from 2011 through 2020, the Memorial Fund found. Of the 151 officers who died in such crashes from 2015 through 2019, 66 were killed in single-vehicle crashes. Some 62 percent of those accidents occurred at night, and half of those fatalities happened while responding to a call for service, as Benda was doing. Through the third quarter of 2021, 44 law enforcement officers had been killed in car crashes.

Only firearm-related deaths and health conditions aggravated by work were responsible for more officers' deaths from 2011 through 2020, the Memorial Fund's data show. However, COVID-19 was the leading cause of death in the law enforcement field in 2020.

The Dodge Charger used for police work is based on a 4-door passenger sedan. Other commonly purchased domestic sedans currently or recently manufactured by Ford Motor Company and General Motors, and tested by IIHS, also score at the lowest level in the organization's headlight testing criteria. Ford and GM are phasing out 4-door sedan vehicles from their product line ups and now offer police vehicles in sport utility vehicle (SUV) and pick-up truck formats.

The Insurance Institute for Highway Safety (IIHS) is an insurance industry trade group that crashes cars to test their safety and publishes performance evaluations of vehicles sold in the U.S., using designations of “good,” “acceptable,” “marginal,” and “poor.”

IIHS has reported that late model Dodge Chargers, including models used as police vehicles by the Iowa State Patrol and many other law enforcement agencies across the nation, have poor-performing headlights for both the low and high beam settings. That rating stemmed from five standardized tests used to evaluate vehicles' headlight reach: forward visibility on straightaways, as well as visibility for 800-foot and 500-foot radius turns to the left and right.

The Dodge Charger police trim version equipped with halogen projector lamps exhibited good low beam visibility for straightaways on both sides of the road, but was inadequate on straightaways for high beam lights. Visibility on curves in all four tests, using low beams or high beams, was rated “inadequate.”

Headlights are essential crash avoidance technology. About half of all fatal crashes in the U.S. occur in the dark, and more than a quarter occur on unlit roads. Headlights have an obvious role to play in preventing nighttime crashes, but not all headlights perform their job equally. Differences in light source, headlight technology and even something as simple as how the lights are aimed all affect the amount of useful light supplied. Properly aimed low beams light up the road ahead without temporarily blinding drivers of oncoming vehicles.

In addition to the Dodge Charger, Chrysler Corporation offers an SUV-based police vehicle, the mid-size Dodge Durango. The IIHS judged headlight performance for the 2020 version of the Durango police vehicle to be “marginal," one step up from the Charger's rating.

“Driving at night is 3 times as risky as driving during the day,” says IIHS Senior Research Engineer Matthew Brumbelow, who conducted the study. “This is the first study to document how much headlights that provide better illumination can help.” [....]

The IIHS website notes that automotive headlight technology has advanced rapidly in recent years, with the introduction of LED and HID lamps. Other improvements include “curve-adaptive” lights that move in response to steering inputs, and lights that automatically switch between low and high beams, depending on the presence of other vehicles.

Despite such progress and government regulation of headlight standards, the IIHS finds that headlight illumination is inconsistent in real world use, due in part to faulty headlight aim. IIHS tests vehicles in the condition it receives them, and does not adjust the aim prior to testing: “Few vehicle owners adjust the vertical aim of their headlights, so leaving the aim the way it was set at the factory makes the testing more realistic."

According to annual police vehicle performance testing done for ten 2021 models as conducted by the Michigan State Patrol, two versions of the Dodge Charger in police trim—one with a V-6 engine and the other with a V-8—each recorded top speeds of 140 miles per hour on a high-speed test track. This testing is done to evaluate the acceleration, braking, and top speed of vehicles available from manufacturers and intended for police use. A Ford Pursuit Utility, based on the Ford Explorer SUV, recorded the highest top speed of the ten vehicles tested, reaching 148 mph.

A dark and lonely road

Trooper Benda was southbound at high speed on Iowa Highway 51 in one of the Iowa State Patrol's distinctive Dodge Charger patrol cars. He was responding to a call for assistance from Clayton County Sheriff's deputies at about 11:30 pm when he apparently swerved to avoid a deer in the roadway, lost control of his vehicle, and rolled down an embankment landing on the driver's side.

A passer by notified authorities of the crash scene, about six miles north of Postville. Benda had to be cut out of the wreckage and was air-lifted to a hospital in Wisconsin, where he died of his injuries six days later.

No wreath or cross marks the spot of the crash, and there is no obvious mark on the landscape to show what occurred, this reporter found when driving in the area last week.

Highway 51 is a two-lane road entirely within Allamakee County connecting U.S. Highway 52 in Postville with Iowa Highway 9, west of Waukon. The road is 32 feet wide: a 12-foot travel lane with a 4-foot paved shoulder and another 6 feet of gravel shoulder in each direction. The Iowa Department of Transportation characterizes the pavement as in “good” condition, said District Engineer Jon Ranney. DOT records indicate the north/south route is lightly traveled – average daily travel is about 1,400 vehicles per day. The speed limit is 55 mph.

The 11-mile route runs almost arrow straight through rolling farmland. The right of way is marked by scattered limestone outcrops that witness the road cut. Long sight lines are evident on the roadway in both directions, even where the ditch falls away 30-40 feet into the many ravines the road traverses. The climb outs from the Yellow River valley and a nearby tributary feature “super-three” passing lanes for slower traffic in the uphill direction.

The fence lines, especially on the west side of the road, are dotted with mature cedar trees. Several cattle operations adjoin the route, but few farm houses face the road. The shoulder has been mowed down to the foot of the ditch in the right of way. The remaining areas are tall grasses with extensive evidence of game trails between the ditches and fence lines along both sides of the road.

Local weather records indicate reporting stations at Decorah (Iowa) and Prairie Du Chien (Wisconsin) measured about a half-inch of rain on October 14, although the data do not specify the precipitation time. The moon was in a waxing gibbous phase with about 65 percent illumination in a clear night sky.

News of the trooper's death inspired state and local officials and citizens to honor his service and his passing. Iowa flags were flown at half-staff, and on the day of Benda's funeral, hundreds of law enforcement officers and ordinary citizens turned out along the procession route.

“I’m deeply saddened to learn of the tragic passing of Iowa State Patrol Trooper Ted Benda,” Governor Kim Reynolds said in an October 21 statement. “Tragic events like this are a somber reminder of how precious life is and of the unwavering, selfless sacrifice our brave men and women in law enforcement make every day.”

Benda joined the Iowa State Patrol in 2016. He was first assigned to the Mason City patrol district and later transferred to the Oelwein district. Before joining the highway patrol, he served with the Iowa Division of Criminal Investigation. A resident of Decorah, Benda was only 37 years old and is survived by his wife and four daughters.

On the evening of Benda's crash, the National Law Enforcement Officers Memorial Fund held its 33rd Annual Candlelight Vigil in Washington, DC, where 701 names, honoring the officers who died during 2020 and 2021, were read aloud. Benda's name has been submitted for inclusion on the Memorial Wall in the nation's capital, according to the Memorial Fund's website. His name will be read at next year's ceremony.