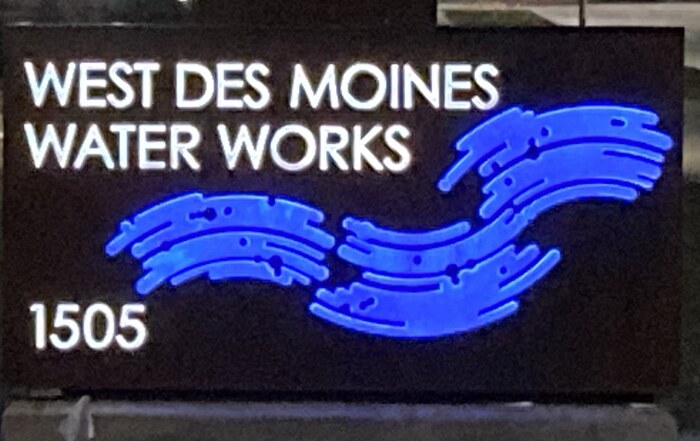 West Des Moines has other ways to address water production

I’m a civil engineering graduate of Iowa State University, was a Registered Professional Civil Engineer in Iowa and the first general manager of West Des Moines Water Works, having been privileged to serve the utility for 27 years, between 1977 and 2004. However, my concern about regionalization of water production isn’t about any of those things.

The proposed change to regional, politicized governance of water production gives away a substantial part of West Des Moines destiny to others. Yes, West Des Moines would receive a voice in the decision-making of wholesale water rates. Whether it is a strong voice or simply a voice in the wilderness, due to the newly added politics, is a definite concern of mine and it should be to all West Des Moines residents.

More important, the proposal gives an added political body the ability to simply say, “No, we cannot provide additional water right now to West Des Moines. We might be able to do that later, but not now.” So, an economic development proposal offered to West Des Moines will occur elsewhere. That is very concerning to me as a resident of West Des Moines since 1955.

The city has grown to more than thirteen times its size in 1955, because it controlled all the resources needed to grow and has exercised them judiciously. This proposal gives away the most important of these resources to others. There are other ways to get some say in the pricing of wholesale water without the giveaway contained in this proposal. In the final analysis, the effectiveness of that voice about costs will always be a major issue, even if this proposal is adopted.

Some people compare this proposal to the Des Moines Wastewater Reclamation Authority (WRA). There is a fundamental difference: the WRA resulted from a federal government mandate. No governmental mandate requires this change in drinking water governance. Additionally, there is no accountability for the WRA Board’s decisions on rate making.

I believe the regionalization of water production governance idea began as long as 20 years ago, when various city and water utility officials became concerned about repeated annual, sometimes double digit, increases in wholesale water rates by Des Moines Water Works. Several consultants have been involved over those years, with one frustrated consultant reporting that no money could be saved through regionalization of water production facilities.

Now, it is said that “30 per cent will be saved” through regionalization, without details offered as how this economic change became possible or the period of time involved. Thirty per cent over 40 years is an insignificant amount per year. I firmly believe that wholesale water rates per 1,000 gallons will never be reduced under this proposal, due to inflation and increased complexity of drinking water regulations.

Some people also think, incorrectly, that this change in water production governance will improve the taste or another quality of “their” water, like hardness. In actuality, it will not change any of these. The water resources and treatment techniques will remain the same, so none of the characteristics of “their” water will change.

Two alternatives have been studied as possibilities for regionalization of water production. But according to the detailed information offered thus far, only one alternative remains under active consideration.

1. The West Regional Plant – provides additional water to Waukee and West Des Moines and water to Van Meter – an increase in population served versus that served by Full Regionalization. This alternative is the more expensive of the two because it requires immediate facility construction and very long water mains to make it work. It is being eliminated from the discussion, in favor of Full Regionalization.

2. Full Regionalization – is a significant governance change pertaining to water production in the metropolitan Des Moines area. Water production, resources, treatment facilities and large water mains would be sold to Central Iowa Water Works, a new politically oriented body. Additional water production assets will be needed sometime in the future, but the specifics haven’t been presented, nor the costs discussed.

Are these the only alternatives possible? No. There are at least two others, or three, if a “do nothing now” alternative is included. None of these other alternatives involves creating Central Iowa Water Works or another governmental entity to would bring additional operating cost and significant debt, along with politics. The other alternatives affecting West Des Moines are:

This long-term, amendable agreement would supersede the current purchased capacity agreements, with appropriate credits given. The result: All affected bodies get to weigh in on the method, thereby silencing the complaints now given to Des Moines Water Works. The requirement to approve such an agreement would be stronger than in the Full Regionalization alternative, in which joining Central Iowa Water Works is an option.

In this simpler alternative, if an entity purchases wholesale water, it must sign the agreement, but each entity would have its input considered as the document is being prepared or amended. This agreement would also require that all the resources involved be upgraded and maintained to industry standards.

The complexities of selling assets are unnecessary in this alternative and Central Iowa Water Works is not needed.

3. Do nothing now; wait until closer to 2045 when the current purchased capacity agreements expire.

It is vital to point out that the raw water available in central Iowa is what is in terms of quality, quantity and location. The water does not care what it is used for, who uses it, how it is treated for those uses, who governs its use or anything else. Neither Full Regionalization nor any other change in governance will affect the location, quality, quantity, taste or any other characteristic of the raw water we are given. It is what it is, and no person or entity can change any of those attributes.

Currently, there are six municipal water treatment facilities in the metropolitan Des Moines area. Two, Grimes and Altoona, are not part of this discussion.

During peak usage times, the Fleur Drive plant can receive water from intakes on the Raccoon River or the Des Moines River, if its water is of better quality or quantity at the time. The Fleur Drive, L.D. McMullen, and A.C. Ward plants use very similar treatment methods: coagulation, settling, softening, filtration and disinfection. Taste control is included at Fleur Drive, while iron removal is included at the A.C. Ward plant. Even though the plants look different, were built at different times and are of different sizes, all use the same basic technology to treat water. Saylorville is the outlier, since it uses the very different reverse osmosis process to treat water from the Des Moines River valley.

The L.D. McMullen plant, its associated water resources and some water transmission mains (particularly the main in West Des Moines’ 88th Street), already serve a portion of West Des Moines. These facilities could be sold to West Des Moines Water Works, in the same manner as is being proposed for their sale to Central Iowa Water Works.

There is no reason to believe West Des Moines Water Works would be unable to take over the operation and maintenance of these facilities, since they are very similar to those the utility already owns and operates. Des Moines Water Works water rate payers would not experience any cost increases resulting from this sale, whereas they would, due to new debt, if the sale were to Central Iowa Water Works.

Further, the L.D. McMullen plant can be remotely operated, thus needing only a small increase in employee support by West Des Moines Water Works, rather than 24 hours per day staffing.

Finally, West Des Moines Water Works’s Board of Trustees path through this process thus far does not pass the smell test. Since the Board started the process on June 23, 2020, it has held 27 closed sessions under Iowa Code Section 388.9(1) to discuss regionalization. Ten of them were held during 2020 and there have been 17 more this year. I anticipate there will be yet another closed session during the meeting of December 14.

The Des Moines Water Works and Urbandale Water Utility Boards of Trustees have held less than six closed sessions during this time.

The West Des Moines Water Works Board opened this topic to the public on November 30 and plans close it on January 26, 2022, when it has stated it will approve the Resolution to adopt the Full Regionalization alternative and ask for preparation of the Chapters 28E/28F agreement.