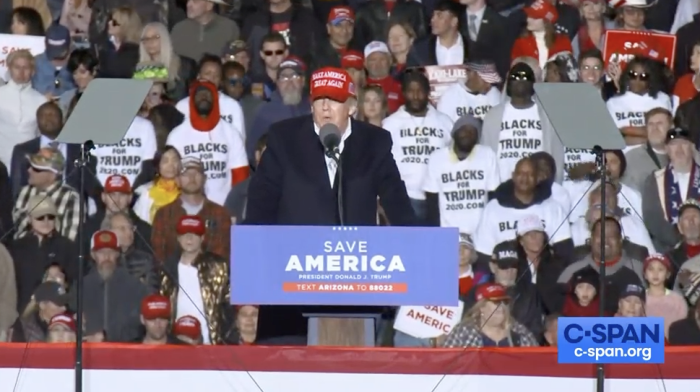 An open letter to Chuck Grassley about Donald Trump

Herb Strentz follows up on his previous post for Bleeding Heartland in the form of a letter to Senator Chuck Grassley.

Thank you for your reassurance that Iowans and the nation have nothing to worry about regarding former President Donald Trump's activities and what seems like his death grip on the Republican Party. Some even say the GOP is now a “Trump Cult.”

Your letter/email of January 10 thanked me for writing to express concerns about Trump, but pointed out my concern isn’t too relevant because “President Trump has been out of office for about a year.”

While Trump has been out of office, you may have noticed he is involving himself in the elections of 2022 and 2024. At his rally in Florence, Arizona this past Saturday, Trump gave a “stump speech” littered with the inaccuracies and lies so common in his campaigns and presidency.

Beyond concerns about the upcoming election, there also are fears that the divisiveness Trump stokes will lead to more civil unrest; even mention of “civil war” is scary these days.

Nonetheless, while deflecting further complaints about Trump, you graciously offered, “I welcome any input you may have on the issues of the day.”

With regard to distress about what Trump says, you have reminded us the former president is "a private citizen" who "can say anything he wants to.”

Perhaps that is why you dismissed or ignored Trump's recent attack on one of your fellow Republican senators, Mike Rounds of South Dakota.

During a January 9 appearance on the ABC Sunday morning show "This Week," Rounds had said, "The election was fair, as fair as we have seen. We simply did not win the election, as Republicans, for the presidency."

Trump lashed out in a written statement issued the next day.

“Is he crazy or just stupid?” Trump said of Rounds. “The only reason he did this is because he got my endorsement and easily won his state in 2020, so now he thinks he has time, and those are the only ones, the weak, who will break away. Even though his election will not be coming up for 5 years, I will never endorse this jerk again.”

Some GOP senators were troubled by Trump's insults. Sinéad Baker compiled a few comments for Business Insider. Senate Minority Leader Mitch McConnell told CNN, "I think Sen. Rounds told the truth about what happened in the 2020 election. And I agree with him." Senators Kevin Cramer of North Dakota and John Thune of South Dakota also agreed with Rounds. Shelley Moore Capito of West Virginia said, "I take great exception to anybody that calls Mike Rounds a jerk. Because he's one of the kindest, nicest, most sincere members that we have."

Perhaps you could comfort your colleagues by pointing out that since Trump is "a private citizen," he "can say anything he wants to.”

A year ago, you acknowledged the 2020 election was not stolen. In fact, following Trump's second impeachment trial, you characterized the former president's language about the election as "extreme, aggressive and irresponsible."

Despite your disdain of Trump's rhetoric and your acceptance of Joe Biden, the former president warmly endorsed you at a Des Moines rally in October. Perhaps being “Iowa nice,” neither you nor any other Republican leader present reminded Trump that evening that Biden is president.

In fact, Senator Grassley, you said it "wouldn't be too smart" not to accept Trump’s endorsement, given his influence with Iowa Republicans.

So in October, Trump did not say you were stupid, crazy, or a jerk. Rather, he described you as "strong" and "very handsome."

Being complimented by Trump puts you in curious company. After all, he has spoken well of Russia’s Vladmir Putin and North Korea’s Supreme Leader Kim Jong Un.

Also recently receiving Trump’s endorsement for re-election is Hungary’s far-right authoritarian Prime Minister Viktor Orban. While some argue U.S. leaders should refrain from getting involved in foreign elections, I’d expect you’re okay with Trump backing Orban because "He's a private citizen…He can say anything he wants to.”

Those less awed by Orban say he has led the country from democracy toward authoritarianism.

Good thing Trump cannot do that to us, since (in your words), “He has been out of office for about a year.”

Anyway, thanks for the invite to let you know if I have any input on the issues of the day—like perhaps recent decisions of the U.S. Supreme Court, whose makeup you helped engineer when chairman of the Senate Judiciary Committee. Or is that, too, no longer an issue of the day?