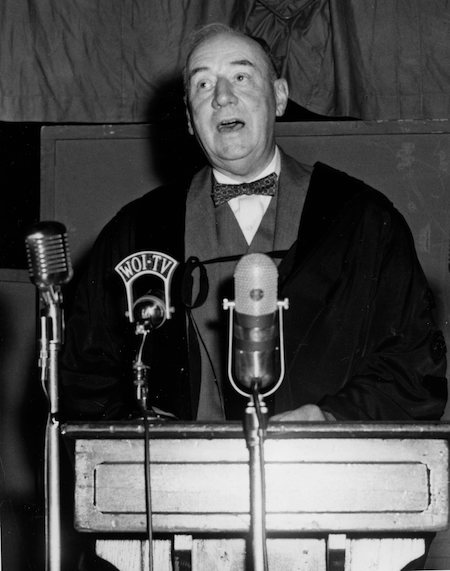 Herb Strentz draws inspiration from three Americans who spoke truth to power when McCarthyism was ascendant.

Edward R. Murrow was among America’s greatest 20th century journalists. He helped see the nation through World War II, mostly through his broadcasts from Nazi-bombed London. He also helped the country get through the “Red Scare” of the 1950s.

Both episodes are distant memories now, even for those who are old enough to remember. But some of us still cling to those memories, and rightly so.

If Murrow were covering the Donald Trump frenzy today he might sign off, “Good night!!! And Good luck!!!”

Murrow (1908-1965) was one of three Americans who comes to mind about how the country coped with hatred and hysteria during difficult times. He and the others helped counter Republican U.S. Senator Joseph R. McCarthy of Wisconsin, who had drummed up vocal and hate-filled support in raising the specter of Commies everywhere in the nation. Trump's tirades are reminiscent of McCarthy’s.

Along with Murrow, I also recall Republican U.S. Senator Margaret Chase Smith of Maine (1897-1995), and attorney Joseph N. Welch (1890-1960). There's an Iowa connection with Welch, who was born and raised in Primghar (O'Brien County). He graduated from Grinnell College in 1914 and received an honorary degree from his alma mater on October 3, 1954, in part a recognition for his damning rebuke of McCarthy.

To provide context for what the three had to say, consider how McCarthyism and too many similar phenomena are part of our national fabric.

Fear and divisiveness flourished in America's political climate some 70 years ago, as now.

To qualify as a suspected Communist or an associate of one, all you had to do was disagree with McCarthy or express sympathy or support for the suffering of society's oppressed. If that sounds like hyperbole, consider that the much-admired Helen Keller came under suspicion during this period. Struck by illness, Keller became blind and deaf when 19 months old. Her triumph in overcoming that tragedy is told in the play The Miracle Worker, based on her 1903 biography, The Story of My Life.

What caught the eyes of the Commie hunters was that Keller was “fairly radical,” and had sent 65th birthday greetings to a feminist labor leader and Communist Party member.

Yes, there’s no end of such personal attacks and fear of dissent in every nation. But in few is it so contrary to what that nation claims for itself and aspires to.

So here’s a brief look at how Smith, Murrow, and Welch spoke truth to power in their day. Their words may inspire us as Trump's cult threatens to undermine democracy while receiving quiet support from the likes of Governor Kim Reynolds and Iowa's U.S. Senators Chuck Grassley and Joni Ernst.

First we have Smith’s “Declaration of Conscience” to the Senate, delivered on June 1, 1950.

Smith showed remarkable audacity in giving this speech, early in her first term. (She would eventually serve four Senate terms.) But she had worked in Congress a dozen years before that, and was a key staffer in the office of her husband, U.S. Representative Clyde Smith. She was elected to succeed him in the U.S. House following his death in 1940, and won her first Senate race in 1948.

As a senator, Smith had the courage to follow her convictions—as evident in this excerpt from her famous remarks.

Surely it is clear that this nation will continue to suffer as long as it is governed by the present ineffective Democratic Administration.

Yet to displace it with a Republican regime embracing a philosophy that lacks political integrity or intellectual honesty would prove equally disastrous to this nation. [...] I don’t want to see the Republican Party ride to political victory on the Four Horsemen of Calumny — Fear, Ignorance, Bigotry, and Smear

I doubt if the Republican Party could — simply because I don’t believe the American people will uphold any political party that puts political exploitation above national interest. Surely we Republicans aren’t that desperate for victory.

When the Republicans gained control of Congress in 1953, however, McCarthy continued his “Red Scare” fervor as chair of the Senate Permanent Subcommittee on Investigations.

There was even a McCarthy-Trump link in that McCarthy appointed a young Roy Cohn as the subcommittee’s chief counsel. Some 30 years later, Cohn would advise Donald Trump on business, criminal, and personal dealings. (Trump cut ties with his onetime mentor after Cohn became ill from AIDS; he died in 1986.)

Perhaps the most significant of Murrow’s post WW II commentaries came at the end of his March 9, 1954 broadcast:

We will not be driven by fear into an age of unreason, if we dig deep in our history and our doctrine, and remember that we are not descended from fearful men – not from men who feared to write, to speak, to associate and to defend causes that were, for the moment, unpopular.

This is no time for [those] who oppose Senator McCarthy’s methods to keep silent, or for those who approve. We can deny our heritage and our history, but we cannot escape responsibility for the result. There is no way for a citizen of a republic to abdicate his responsibilities. As a nation we have come into our full inheritance at a tender age. We proclaim ourselves, as indeed we are, the defenders of freedom, wherever it continues to exist in the world, but we cannot defend freedom abroad by deserting it at home.

The actions of the junior Senator from Wisconsin have caused alarm and dismay amongst our allies abroad and given considerable comfort to our enemies. And whose fault is that? Not really his. He didn’t create this situation of fear; he merely exploited it – and rather successfully. Cassius was right. “The fault, dear Brutus, is not in our stars, but in ourselves.”

Three months later, Welch was the Army’s legal counsel at what were called the Army-McCarthy hearings, because McCarthy had accused the U.S. Army of being “soft on communism.” When McCarthy had assailed a young member of Welch’s legal firm, the Grinnell graduate gave what likely is the most quoted rebuke of McCarthyism on June 9, 1954:

Until this moment, senator I think I never really gauged your cruelty or your recklessness. [...]

In the hearing room, onlookers burst into applause.

Welch had summed up the exasperation that many, including President Dwight D. Eisenhower (a retired Five-Star General), had with McCarthy— not unlike the exasperation we have with Trump and his lies about a “stolen election.”

Nearly six months passed before the Senate condemned McCarthy for conduct unbecoming of a senator in December 1954, by 67 votes to 22.

All 45 Senate Democrats supported the censure; the chamber's Republicans split 22-22. Iowa Democrat Guy Gillette voted for condemnation. Iowa Republican Bourke Hickenlooper voted against it. (Apparently he was unmoved by Welch’s Iowa credentials or the fact that as Margaret Chase, McCarthy's leading Senate GOP critic had been captain of her high school girls basketball team.)

McCarthy was 48 and still in office when he died in 1957 of illnesses exacerbated by alcoholism.