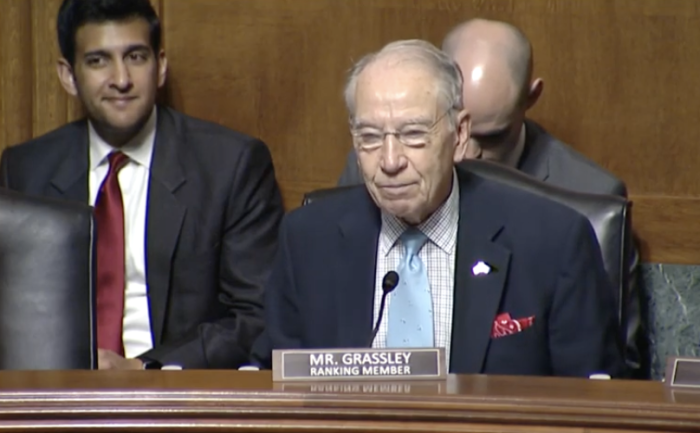 Iowa must do better than Chuck Grassley

A one-time Democratic candidate to represent Iowa in the U.S. Senate was only half right when he expressed concern in 2014 that Senator Chuck Grassley might be a threat to our nation’s judiciary.

The comment is relevant today because Grassley still serves on the Senate Judiciary Committee, as the panel's ranking Republican. He will set the tone for how Republicans respond to President Joe Biden's nomination of the first Black woman to serve on the U.S. Supreme Court.

At a fundraiser in Texas, then U.S. Representative Bruce Braley had told attorneys why they should contribute to his campaign to succeed the retiring Democrat Tom Harkin. Otherwise, Braley warned, the Judiciary Committee might be chaired by “a farmer from Iowa who never went to law school.”

Braley soon apologized for that statement, which troubled Iowans because the Democrat was thought to have disparaged farmers. Republicans continued to highlight the gaffe throughout the 2014 campaign; Braley lost the race to Joni Ernst by 52.1 percent to 43.8 percent.

A Des Moines Register editorial back then put it this way:

There are legitimate reasons to question Grassley's fitness to be chairman of the Judiciary Committee, however, and Braley overlooked them. Whereas Grassley at one time prided himself on being a maverick and voting to confirm even presidential nominees with whom he did not agree, Grassley has joined fellow Republicans in routinely voting against the confirmation of federal judges he considers too liberal. He recites the Democrats' rejection of Republican nominees as justification for retaliation by Republicans, regardless of the nominee's qualifications.

The same holds true today, as Grassley has voted against confirming some highly-qualified judges nominated by Biden.

Grassley easily defeated his 2016 challenger Patty Judge and now seeks an eighth term in the U.S. Senate. His views on the judiciary should again be a campaign issue.

A February 2 news release from the senator's office noted in part, "For me, a justice ought to interpret laws according to text and original meaning, not make law from the bench. The nominee’s views on these important matters will be especially critical during the Senate’s review process."

That statement is at odds with how Grassley ran the Judiciary committee for four years. He played a major role in shaping the federal bench and U.S. Supreme Court, not by following original text and meaning, but by doing whatever then Senate Majority Leader Mitch McConnell or President Donald Trump wanted.

An August 2020 Bleeding Heartland post flagged an Iowa Law Review article that was mostly ignored in the mainstream media. Carl Tobias, a law professor at the University of Richmond in Virginia, analyzed Grassley’s performance as Judiciary chair and showed that during the last two years of Barack Obama's presidency,

Grassley jettisoned, changed or deemphasized a number of venerable strictures and conventions.3 For example, he did not respect Democratic home state politicians’ blue slips for appellate court nominees, limit the number of nominees in hearings to one appeals court prospect, or conduct panel votes after the American Bar Association (“ABA”) had completed evaluating and rating circuit and district court nominees.4 The dramatically accelerated pace of nominations and confirmations as well as Republican senators’ penchant for rubberstamping nominees and lockstep voting in the Judiciary Committee and on the Senate floor enabled Trump to appoint the most circuit judges ever, numbers of whom are ideologically conservative, young and talented.5

In a recent email exchange, Tobias told me Grassley has never contacted or challenged him regarding his writing about the senator's partisan chairmanship of the Judiciary committee.

As the Register's editorial of 2014 had already noted, the man once valued and respected for being a maverick now often puts party ahead of principle.

Witness his recent reassurances that, while he prizes Trump’s endorsement, Trump's lies should be no concern because as a private citizen, can say anything he wants.

The casual dismissal of threats that Trump and his followers pose to democracy is compounded by Grassley’s refusal to speak out against the continuing hate and division spawned by that GOP faction. The official view of the Republican National Committee is now that the events of January 6, 2021 were “legitimate public discourse,” and Republicans who participate in investigating those events should be censured.

Top RNC officials have claimed that "legitimate political discourse" referred not to the deadly attack on the U.S. Capitol, but to the political rally that preceded it. At that "Stop the Steal" event, Trump and others lied about the 2020 election, and the soon-to-be-former president told supporters, "if you don't fight like hell, you're not going to have a country anymore."

NBC News correspondent Garrett Haake asked Grassley three times on February 7 "if he agreed with the RNC about Jan 6 being legitimate political discourse. He refused to answer and and complained about me holding up his elevator."

Farmers and all Iowans must do better than the current incarnation of Grassley and the Trump cult that dominates the GOP.