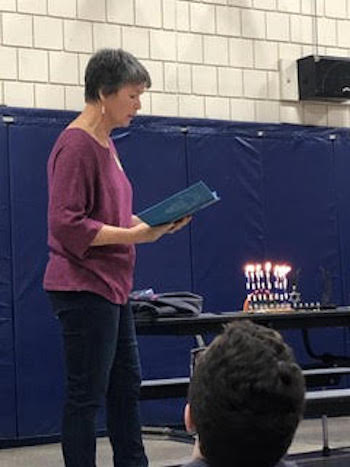 It’s easy to call the Republican Party racist and homophobic when all the books they want to ban happen to deal with people of color, members of a minority religion, or LGBTQ issues; when a predominantly Black demonstration is a “riot” and a predominantly white one “legitimate political protest;” when legislation to curb non-existent voter fraud targets voting methods more often used by people of color.

But white nationalist ideology in its current iteration in the United States is not simply racist. The definition of racism as "belief that another race is inherently inferior" does not begin to explain 21st century white nationalism. It is much more complicated than that.

Racism is used to rile the Republican base, yes. But those using white nationalism to build their power are not themselves racist, or at least that’s not their defining belief. Rather, they are power hungry people who do not believe in the value of a democratic republic.

One clue here is that even though Republicans and conservative media rarely miss a chance to race bait, they also never miss a chance to put forward a conservative Black person. This is how you know something different is going on. Was there ever a Ku Klux Klan member who bragged about including Black people? Did Hitler ever allow any Jewish Germans to retain a position of power?

Several principles are more important to white nationalists than race. For instance:

The GOP has been remarkably successful in labeling Democratic Party policies as “socialist.” That has fueled their electoral success much more than appeals to racism. Huge swaths of American voters will never consider voting for a Democrat because they’ve become convinced that it means voting for socialism.

Never mind that Democratic policies like a living wage, workplace safety, public schools, regulatory oversight, and investment in public infrastructure have historically been championed just as much by Republicans as by Democrats.

Over the past thirty or so years, any such talk has been slapped with the “socialism” label and is now used to reliably shut down civic discourse or public conversation about any policies that might attract the dreaded moniker. This despite the fact that some of the most politically-untouchable programs of American government (think: Social Security, Medicare, farm program checks) are in fact socialistic, which is to say, they represent an explicit redistribution of wealth in service of a particular policy goal (keeping retirees out of poverty and making retirement possible at all; making sure senior citizens have health care; preserving the ability of America to feed itself — not, contrary to popular belief, preserving family farms).

The most socialist policies we have, dating back 70 years and more, are never attacked as such, while any attempt to improve equity in the labor market, use tax policy to help renters rather than owners, or provide health care to more than senior citizens are not just criticized, they are demonized as “socialism,” the ideology that will destroy America.

And here is where the white nationalists tip their hand. Much of this hatred of socialism is powered by anti-Semitism. The language tends to be subtle— those unschooled in the tenets of anti-Semitism may miss the dog whistles when “international bankers” and “powerful journalists” and “behind the scenes power brokers” are blamed for the ills of the day.

But you seldom have to scratch too deep in the right wing to find the belief that Jews invented socialism and have been the primary purveyors of this ideology that aims to destroy the world as we (real Americans) know it, especially individual freedom and individual rewards for work. After all— Karl Marx was Jewish (communism isn’t socialism — but try explaining that to the average GOP voter, or any other American for that matter).

White nationalism’s first cousin, Christian nationalism, will often talk about a deep love for Israel, and express that love by supporting so-called pro-Israel foreign policy. This can seem to run counter to the charge of anti-Semitism, until you realize that the end times for which evangelical Christians are endlessly hopeful require the existence of Israel to fulfill what they believe to be Biblical prophecy. They need Israel to exist so all the Jews can move there and push events along the trajectory to the apocalypse. “Support for Israel” does not mean one is not also anti-Semitic.

The willingness of the current GOP leadership to not only tolerate but encourage this subtle anti-Semitism for the sake of power is more frightening than any out-in-the-open race baiting. They are going down the path of making demons out of sub-groups of American citizens — see “libtards” and all the rest of the vilifying rhetoric against anyone who espouses anything that can be tarred with the “socialist” brush. “Lock her up” has moved on to “execute her.”

When such language is acceptable public speech, when people are convinced that anyone who isn’t with them is trying to destroy them, when people who love their country believe that groups of their fellow citizens are their enemy instead of just people who also love their country but hold different opinions on some policies, when words leave no gray areas - what is a person to do?

Top image: Sondra Feldstein teaching Bondurant-Farrar third grade students about Hanukkah. This has been a tradition at Bondurant for nearly 20 years - and every year, she wonders whether a parent will complain that their children learned about a religion that isn’t Christianity. Photo provided by the author and published with permission.