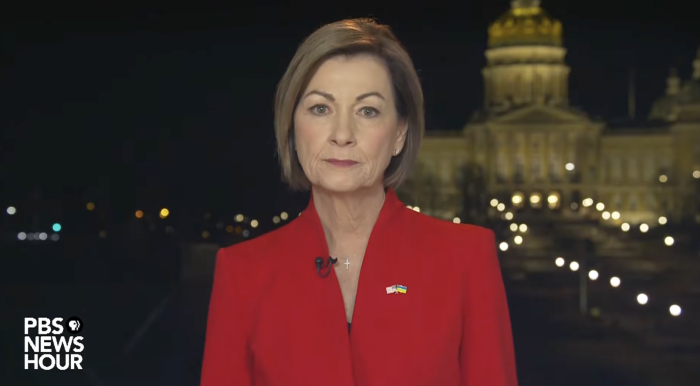 Once upon a time, American politicians shied away from criticizing the president during a foreign policy crisis. But Republicans have given President Joe Biden little credit in the aftermath of Russia's invasion of Ukraine.

Reacting to Biden's State of the Union address on March 1, both Governor Kim Reynolds and Senator Joni Ernst suggested that Biden was to blame for the tragic turn of events.

Reynolds delivered the official Republican response to Biden's speech. As expected, she spent a lot of time repeating well-worn talking points about her approach to COVID-19, tax cuts, and parental involvement in schools. (You can watch the video here.) But I was most struck by this part of the governor's remarks:

And now Russia has launched an unprovoked, full-scale military invasion of Ukraine, an attack on democracy, freedom, and the rule of law.

Now all Americans must stand united in solidarity with the brave people of Ukraine as they courageously defend their country against [Russian President Vladimir] Putin's tyranny and fight for their freedom.

But we shouldn't ignore what happened in the runup to Putin's invasion: waiving sanctions on Russian pipelines while eliminating oil production here at home; focusing on political correctness rather than military readiness; reacting to world events instead of driving them.

Weakness on the world stage has a cost, and the president's approach to foreign policy has consistently been too little, too late.

Senator Joni Ernst released her own video response to Biden's speech, which included the following comments:

Abroad, our adversaries are emboldened—and on the march—and America is following instead of leading.

President Biden abandoned American citizens and our allies in his haphazard withdrawal from Afghanistan—resulting in the death of 13 service members—including Cpl. Daegan William-Tyeler Page of my hometown of Red Oak.

Let’s make no mistake about it, the president’s disaster in Afghanistan, and his weakness as a leader, can’t be separated from what we’re seeing right now in Ukraine—Russia’s war of aggression and attack on freedom. President Biden’s doctrine of appeasement – and his bending to the demands of the Radical Left — have made the world less safe.

This take on current events is remarkable, when one considers Donald Trump's fawning praise for Putin on many occasions. Just last week, the former president said it was "genius" and "pretty savvy" for Putin to declare parts of Ukraine as independent states. That action served as the pretext for the Russian invasion.

Not only that, Trump literally held up military aid to Ukraine in 2019 while attempting to serve his own political goals by extorting President Volodymyr Zelenskyy. Two years ago, Ernst declared that point "moot," since Ukraine eventually received the military assistance.

But when she voted to acquit Trump following his first impeachment trial, Ernst dared not voice even mild criticism of how Trump conducted himself toward his Ukrainian counterpart. Instead, she said, "the issue of foreign affairs has historically been fraught with peril for Presidents—foreign affairs is an art, not a science, and trying to insert a formula into every presidential interaction with a foreign leader is a path towards ineffectiveness."

Not only have Reynolds and Ernst memory-holed Trump's behavior toward Zelenskyy, they don't acknowledge Trump's efforts to undermine the NATO alliance. He floated the idea of pulling the U.S. out of the pact in 2018, and was NATO's "loudest critic" the following year, bashing our European allies and suggesting that the U.S. spends too much on the alliance.

NATO may be stronger now than it's been in years, due in part to the Biden administration's effective recent diplomacy. Finland and Sweden may be inching closer to joining the alliance.

During a February 28 appearance on Newsmax, Ernst implied that the Biden administration was not providing "lethal aid" to Ukraine and was not putting pressure on Putin "and all of his oligarch cronies." But many countries agreed quickly to impose tough sanctions on Putin and his cronies. The U.S., United Kingdom, and European Union cut some Russian banks out of a crucial international messaging system. Even Switzerland abandoned its decades-long doctrine of neutrality to freeze Russian assets. The U.S. and several other countries have barred Russian aircraft from their airspace.

The U.S. announced last month plans to provide an additional $200 million in military aid to Ukraine. And on February 26, Secretary of State Antony Blinken said he had authorized "an unprecedented third Presidential Drawdown of up to $350 million for immediate support to Ukraine’s defense. This brings the total security assistance the United States has committed to Ukraine over the past year to more than $1 billion."

The many European countries providing military assistance to Ukraine include Sweden and Germany, which reversed longstanding policies to do so. The AFP news service noted, "For Sweden, this is unprecedented since the Winter War of 1939, when it sent assistance to Finland to counter an invasion by none other than the Soviet Union." Emily Schultheis reported for the Associated Press, "Germany’s stunning decision to send anti-tank weapons and surface-to-air missiles to Ukraine — abandoning its long-held refusal to export weapons to conflict zones — is nothing less than a historic break with its post-World War II foreign policy."

Certainly Biden doesn't deserve all the credit for those actions; the biggest driving factor was Putin's decision to invade a sovereign nation and bomb civilian targets. But you can't seriously claim that Biden is "following instead of leading." To accuse him of having a "doctrine of appeasement" toward Russia is simply laughable.

Top image: Screenshot from the PBS News Hour video of Governor Kim Reynolds delivering the Republican response to the State of the Union address.