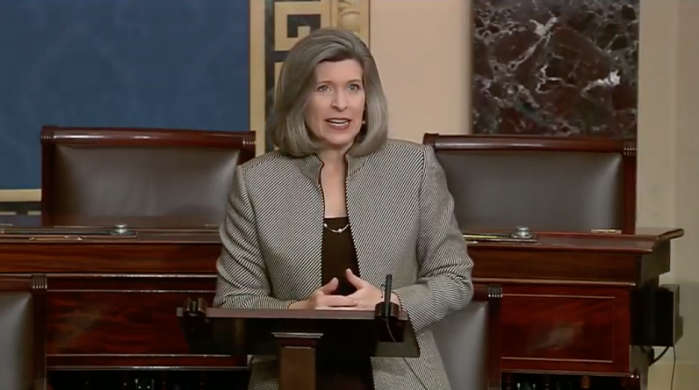 President Donald Trump's impeachment trial ended on February 5 with U.S. Senate votes to acquit on both counts: 52-48 for "not guilty" on abuse of power and 53-47 for "not guilty" on obstruction of Congress. Republican Senator Mitt Romney joined the 47 members of the Democratic caucus to convict on the abuse of power charge; the other vote fell along straight party lines.

Public comments from Iowa's Senators Joni Ernst and Chuck Grassley over the past several months indicated that neither would seriously consider convicting Trump under any circumstances. Both opted not to subpoena documents the White House refused to provide during the House investigation, and voted not to hear any testimony from witnesses the president sought to keep quiet. So yesterday's votes were no surprise.

Nevertheless, it's worth taking a closer look at Ernst's public explanation for her vote. A separate Bleeding Heartland post will cover Grassley's justification for voting to acquit.

AVOIDING A "NEW AND DANGEROUS PRECEDENT"

In a five-minute speech enclosed in full below, Ernst said remarkably little about Trump's conduct. In fact, she did not even mention Ukraine.

Rather, she argued that the Constitution sets the bar high for removing a president because the Founders didn't want impeachment to become a way to "upend the electoral will of the American people" or "achieve political advantage."

Ernst asserted that House managers were acting out of partisan motives and "simply did not demonstrate that the President’s actions rise to an impeachable offense."

Next, she argued that convicting Trump "would remove the ability of the American people to make their own decision at the ballot box in November," setting a "new and dangerous precedent" and taking us down "a very dark path."

Finally, she offered a prayer that impeachment would not "become the norm" of political combat in Washington.

"FOREIGN AFFAIRS IS AN ART, NOT A SCIENCE"

It's notable that Ernst didn't claim House managers failed to prove Trump ordered a hold on military aid in order to pressure Ukraine's leader to boost his re-election prospects. She simply argued that his conduct wasn't a high crime meriting impeachment.

What kind of conduct would be impeachable, in her view? She didn't say, but she implied that foreign policy should be above scrutiny.

Under the Constitution, impeachment wasn’t designed to be a litmus test on every action of the President – elections were designed to be that check. Further, the issue of foreign affairs has historically been fraught with peril for Presidents—foreign affairs is an art, not a science, and trying to insert a formula into every presidential interaction with a foreign leader is a path towards ineffectiveness.

Who's "trying to insert a formula into every presidential interaction with a foreign leader"? Democrats are only asking that the president not subvert the country's national security interests to serve his own political goals.

Does Ernst believe Trump violated any laws? She didn't say.

But the Impoundment Control Act "does not permit the President to substitute his own policy priorities for those that Congress has enacted into law," the U.S. Government Accountability Office determined last month.

In addition, it is illegal to solicit anything of value from foreign nationals for a campaign for federal office--even if the candidate never gets what he was after.

Ernst has previously characterized the whole scandal as "moot," since Ukraine eventually received the military aid. But that happened only after the media had begun to report on the hold, and Trump became aware of the whistleblower complaint.

"HE DID IT MAYBE IN THE WRONG MANNER"

We still don't know whether Ernst believes it is fine for a president to pressure a foreign power to investigate a political rival. She has danced around the question many times. From her interview with CNN's Jake Tapper on February 2:

TAPPER: You voted against a motion to hear from new witnesses on Friday.

Do you think it was inappropriate and wrong?

ERNST: I think ferreting out corruption is absolutely the right thing to do.

Now, if he was tying it to other things, that's -- that's the president. It's probably something that I wouldn't have done, but focusing on corruption absolutely is...

TAPPER: He didn't bring -- he didn't mention corruption in that call, though, as you know. He just mentioned Joe and Hunter Biden and Burisma. And then he mentioned this conspiracy theory about Ukraine interfering in the election in 2016.

So, again, probably not something that I would have done. It's out there. He's done it.

The president has a lot of latitude to do what he wants to do. Again, not what I have done, but certainly, again, going after corruption, Jake...

TAPPER: So, you're saying it's not perfect. I get that. But, like, if it's not something...

ERNST: Maybe not the perfect call.

ERNST: I think, generally speaking, going after corruption would be the right thing to do.

TAPPER: No, but going after the Bidens.

ERNST: He did it -- he did it maybe in the wrong manner.

TAPPER: In the wrong manner.

ERNST: But I think he could have done it through different channels.

Now, this is the argument, is that he should have probably gone to the DOJ. He should have worked through those entities, but he chose to go a different route.

Tapper followed up by asking whether Ernst is confident Trump "won't try to get another foreign country to look into a political opponent, whether it's Elizabeth Warren or Pete Buttigieg or someone else." She replied,

ERNST: I think that he knows now that, if he is trying to do certain things, whether it's ferreting out corruption there, in Afghanistan, whatever it is, he needs to go through the proper channels.

ERNST: So, again, using the DOJ and other international organizations to get to that corruption.

Meanwhile, Trump again insisted on February 6 that he had a "perfect call" with the newly-elected Ukrainian president in July. He admitted in the same speech that if he hadn't fired FBI Director James Comey, he might not be president.

In other words, Trump has learned that obstructing an investigation paid off.

He also knows that with the exception of Mitt Romney, not one member of Congress in his own party will hold him accountable for misconduct. They won't allow a full examination of relevant evidence and witness testimony. Not even Republicans like Ernst, who long advocated for increasing military assistance to Ukraine and accused the previous president of encroaching on Congressional authority.

I hope and pray that we never have a president like Donald Trump in the Democratic Party, one that would betray the national interests and the country's security to help with his re-election. And I would hope to God that if we did, we would impeach him, and Democrats would lead the way.

When the president tries to coerce an ally to help him cheat in our elections and then covers it up, we must say enough! Enough.

That's the "new and dangerous precedent" all Americans should fear now.

Appendix: February 5 news release from Senator Joni Ernst, containing the full text and video of her speech on the impeachment trial

Ernst A ‘No’ on Articles of Impeachment, Calls on the Senate to Come Together and Work on Behalf of the American People
The Iowa Senator said, “the House Managers’ arguments have argued that the American people cannot be trusted to render their own judgment on this president. I reject this premise and the complete distrust of the American people with everything in my heart.”

WASHINGTON—After hearing testimony from more than a dozen witnesses, being presented with over 28,000 pages of documents, and listening to the full arguments from both sides through the fair Senate trial, U.S. Senator Joni Ernst (R-IA) announced she would vote “no” on both articles of impeachment against President Donald Trump.

Senator Ernst spoke on the Senate floor regarding her decision, stating that the arguments of the House Managers’ did not demonstrate the president’s actions rise to an impeachable offense, and that removing the president would take away the ability of the American people to make their own decision at the ballot box in November.

She cautioned senators from allowing impeachment to become the norm and called on the Senate to come together to continue its work for the American people.

Click here or the image above to watch Senator Ernst’s remarks.

Senator Ernst’s full speech is below:

“Madam President, I want to first thank the House Managers, and the Counsel for the President, for their time, their hard work, and patience these past few weeks.

“Yes, folks, we have had a robust and at times rancorous trial – some days I left here feeling angry, and some days I left more hopeful. Frankly, it is likely that many Americans, and in my case Iowans, from every political stripe, will feel hurt by this process at some level. But we are all representatives of the ideals and beliefs of the people we are here to represent.

“Like all of you, I have sworn an oath to uphold the Constitution, and I take that oath very seriously.

“There have been a lot of arguments presented about what the Constitution says regarding the threshold for impeaching a President.

“It’s clear to me that the Constitution goes out of its way to make it a high bar for removing the President.

“This is because the Founders were rightfully concerned that impeachment might be used to upend the electoral will of the American people. Absent restraint, the impeachment process would be all too tempting for those that oppose a sitting President to simply use it as a tool to achieve political advantage.

“Each of us had one job. One job during this process: to decide, based on the evidence, whether the President committed an impeachable offense.

“Upon reviewing the record containing the testimony of 17 witnesses and over 28,000 pages, as well as hearing from both sides on their arguments presented throughout this process, I will vote against both articles of impeachment.

“The arguments of the House Managers simply did not demonstrate that the President’s actions rise to an impeachable offense.

“Given the constitutional requirements, voting any other way on these articles would remove the ability of the American people to make their own decision at the ballot box in November.

“This process was fraught from the start with political aims and partisan innuendos that simply cannot be overlooked.

“To do this would set a new and dangerous precedent in American history.

“As we sit here today, we believe we are experiencing a unique and historical event. However, if the case presented by the House of Representatives is allowed to be the basis for the removal of this president, I’m afraid that impeachment will become just another tool used by those who play partisan politics.

“This is not what the Founders intended and this a very dark path to go down.

“Under the Constitution, impeachment wasn’t designed to be a litmus test on every action of the President – elections were designed to be that check. Further, the issue of foreign affairs has historically been fraught with peril for Presidents—foreign affairs is an art, not a science, and trying to insert a formula into every presidential interaction with a foreign leader is a path towards ineffectiveness.

“The Senate is about to close this chapter in American history.

“I pray that we do not allow this to become the norm. I also pray earnestly that we will shift into a spirit of cohesiveness, coming together to get our work done for the American people.

“Our people, our Founders, our country, and my great state of Iowa, deserve better than this. Thank you.”

Top image: Screen shot from the video of Senator Joni Ernst explaining her votes to acquit Donald Trump of the charges against him.