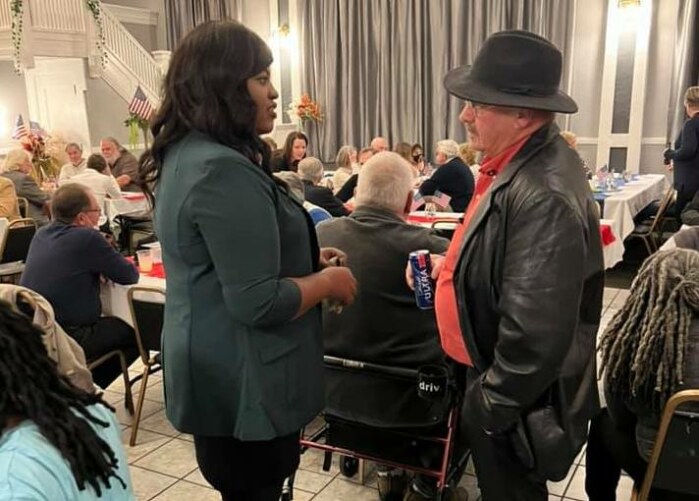 Iowa is blessed to have Deidre DeJear running for governor. Democrats should be proud we have the opportunity to support and fight for such an inspirational and qualified woman who will represent all the people of Iowa. In the past, we took for granted that our elected officials would represent all Iowans, or at a minimum, they would at least not put targets on the backs of some of us. That is no longer the case in Iowa.

Deidre DeJear is a special kind of candidate who lights up a room when she enters. I know I feel as if something special has happened when I see her. Maybe more importantly, I know other Democrats, from moderate to far left who feel the same way. Knowing a candidate cares about you, and not just the collective you, has a major impact on a person’s desire to not just vote for that candidate, but to step out of their comfort zone and do the work that needs to be done to get them elected.

We’ve had uninspiring Democratic candidates in the past. It’s difficult to find volunteers when candidates don’t excite our base or seem distant from our lives and struggles. That’s not the case with DeJear. She makes a personal connection to the people she meets. Her warmth and sincerity are clear to everyone who meets her. She asks what we love about our state and what we would like to improve. She values our opinions and it shows.

Deidre came to us from Mississippi and Oklahoma. Those of us who have spent our entire lives in Iowa know it’s a privilege when someone such as DeJear selects us, Iowans, to be their neighbor. We all know people who have done so. They are our friends and neighbors, too. Much like those who have returned to Iowa after long absences, the new residents tend to take immense pride in being Iowans.

As for her qualifications, no she has not held elected office, but she has been active in politics. We’ve had white male candidates run for governor without having held public office and there are white men running for U.S. Senate now who have not held high elected office.  I don’t hear people say they are unqualified and that’s because they aren’t, and neither is she.

They all carry with them life experiences, career achievements, and visions for Iowa’s future. As governor, those three qualifications are critical in how DeJear will lead our state from going backward to forward. Her experiences with small businesses have not just given her connections, but ideas and a view into the world of entrepreneurs and the challenges faced by small businesses in Iowa.

We hear so much about money. “DeJear spent it all.” and “ Reynolds has so much.” These discussions have begun to define DeJear as a candidate in some circles. We already knew the governor was well funded, so let’s stop making comparisons. DeJear has spent her money as it came in to build her campaign infrastructure. Building a campaign is much like building a house. First, you build the foundation. Without it, your future work will collapse. I want a candidate who has the foresight to build a strong foundation to prepare for the tough fight we know is in front of us (yes, us).

It seems the pockets and pocketbooks of many of the usually reliable Democratic donors have been closed to DeJear. I’ll ask it. What’s the problem? Do you want her to be underfunded? Do you want her campaign to struggle financially? Did you hope for another candidate? Or, do you simply want her to lose?

The donor class must answer the first questions for itself, but the rest of us Iowa Democrats don’t feel the same way. In the past, we have knocked doors and made calls while struggling to sound excited for candidates that were well financed by Democratic donors. It makes a candidate difficult to sell to a voter if we, the volunteers, are not excited. DeJear gets us excited. I won’t forget the early morning call I got from a rural retired railroad engineer the day after he met her. He couldn’t say “I love Deidre!” enough.

Her campaign needs funding so that campaign material is available for those of us who will be knocking doors. We are excited. We know people who want yard signs. Even here in Southeast Iowa we’ll need TV ads. We, the volunteers of the Iowa Democratic Party and all Iowans deserve everything a serious statewide race requires.

An increasingly diverse Iowa population includes many people who have been negatively affected by Kim Reynolds' policies. All of us have friends, family, and neighbors who agree with us, but perhaps haven’t voted before. Maybe others voted for Republicans in the past, but now we will have the opportunity to introduce them to Deidre DeJear, a candidate with organizational skills, business experience, and personality. DeJear can lead Iowa into the future.

The Iowa Democratic Party consists of a multitude of Iowans, including those you rarely see at Democratic events. Still, the right candidate will bring them out. At our Lee County Democratic Party’s Eppers-O’Malley Dinner last fall, we had 150 attendees ranging in age from eleven to their upper 80s. We were racially and economically diverse. The candidates and local Democrats stayed until the end of the evening to see the presentation of awards to volunteers so we could celebrate their achievements together. We were Iowans unified in our diversity. We were proud Democrats.

DeJear really lit up the room that night. She is the spark we need at the top of our ticket.

Top image: Photo of Deidre DeJear at the 2021 Lee County Eppers-O'Malley Dinner provided by the author and published with permission.