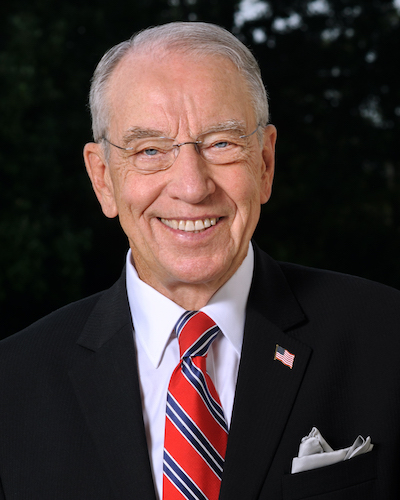 Grassley shared the photo with his more than 670,000 Twitter followers at 11:44 am, commenting, "Joined a zoom mtg w President Zelenskyy. we don’t hv a minute to waste in helping Ukraine fight off Putin who is killing innocent ppl to benefit his own ego."

U.S. Representative Dean Phillips of Minnesota blasted Republican Senators Steve Daines and Marco Rubio, who posted similar screenshots of Zelenskyy while the meeting was ongoing. Phillips tweeted, "The Ukrainian Ambassador very intentionally asked each of us on the zoom to NOT share anything on social media during the meeting to protect the security of President Zelenskyy. Appalling and reckless ignorance by two US Senators."

Russian forces are believed to be plotting to assassinate Zelenskyy if he is found in Ukraine's capital city, Kyiv.

U.S. Representative Jim Himes, a Democrat from Connecticut, also posted a photo of Zelenskyy, commenting later on his Twitter feed, "And for everyone concerned on Twitter, we were asked to not post during the zoom. This was posted well afterwards." Other Democrats, including Senator Maggie Hassan of New Hampshire, Senator Joe Manchin of West Virginia, and Senator Tim Kaine of Virginia likewise tweeted pictures of the Zoom call after it ended.

Grassley's communications director Taylor Foy did not reply to email messages seeking comment on the wisdom of providing visual clues about the Ukrainian president after the meeting.

U.S. SHOULDN'T "COMPROMISE THE WELL-BEING OF AN ALLY"

Mike Franken had a decades-long career in the U.S. Navy and drew on that experience in a March 7 telephone interview. He explained that military and intelligence analysts look for lots of information when they examine photos and videos of adversaries. In addition to looking for details that might reveal the speaker's location, they also search for any indicators about the person's health or emotional state.

When a nation's in conflict, their wishes should be respected, and we shouldn't compromise what the enemy may very well learn from the well-being of the nation's leaders: whether that person is healthy, thinking clearly, enough rested that they're making decisions properly.

There's little reason to glorify or self-promote one's position for the benefit of, really, a vacuous cause.

Franken said elected officials should "comply with the wishes of the person who was kind enough to be on the video with them, and to ensure that nothing is said, nothing is displayed that would compromise the well-being of an ally."

Posting pictures from such a call, even after the fact, is "absolutely pointless" in Franken's opinion. "It is of no value." If any aspect could allow the Russians to draw inferences about Zelenskyy's state of mind, they might conclude, "We're getting to him." He described that kind of analysis as "a psychological profiling" that sometimes leads to "direct action."

Dr. Glenn Hurst told Bleeding Heartland via email on March 7, "In health care, our code starts with the principle: first, do no harm."

Whether Grassley posted the image of the Ukrainian president during or after the meeting, Hurst added, "the risk of revealing his location and putting him in harm's way was obvious. It was either ignorance or willful indifference to the risk. Neither quality is the hallmark of an American senator."

GRASSLEY "DID ESSENTIALLY THE SAME TO CHRIS STEELE"

If he thinks it gives him political advantage, Chuck Grassley is shown to be cavalier about the safety of foreign national leaders like Zelenskyy, the intelligence communities of friendly nations, and ultimately, of US and NATO security needs. His posting of a photo of his Zoom call with Zelenskyy gives Russian intelligence critical leads. Colors in the room, furniture, meta data on the photo, all allow the bad guys to place a piece of the jigsaw puzzle in their effort to find and kill all Ukrainian leadership, including Zelenskyy.

Krause added that this is not the first time Grassley put someone in danger. He asserted that the senator "did essentially the same to Chris Steele of the famous Steele dossier," and did not stop despite a warning. Krause likened Grassley's action to "a treason that threatened the entire United Kingdom spy network in Russia."

He noted that Grassley wrote to the U.S. Department of Justice, "trying to force exposure of Steele's sources."

“Would it be possible to speak later today please?” Mr. Steele asked Associate Deputy Attorney General Bruce Ohr in a text message on March 7, 2017. “We’re very concerned by the Grassley letter and it’s possible implications for us, our operations and our sources. We need some reassurances. Many thanks.”

Say what you will about Chris Steele, he was Moscow bureau chief for the United Kingdom's MI6 (their CIA equivalent). It is a top posting within the international intelligence community and Chris Steele is still well respected world-wide in that community. And, in retirement, there is no doubt he used many of his UK connected Russian assets to write the dossier.

Those sources "would have been jeopardized and likely eliminated" by Russian intelligence, Krause said. "Like Grassley's exposure of key information on Zelenskyy, Grassley's effort against Steele, purposeful or not, aided and abetted a known foe of the United States and may have critically injured actual people as well as our ability to gather intelligence on Russia."

Bleeding Heartland also sought comment from Abby Finkenauer; her campaign did not respond. On the morning of March 5, Finkenauer accused Grassley of ignoring the security of the Ukrainian president and called on him to "Take the damn photo down." 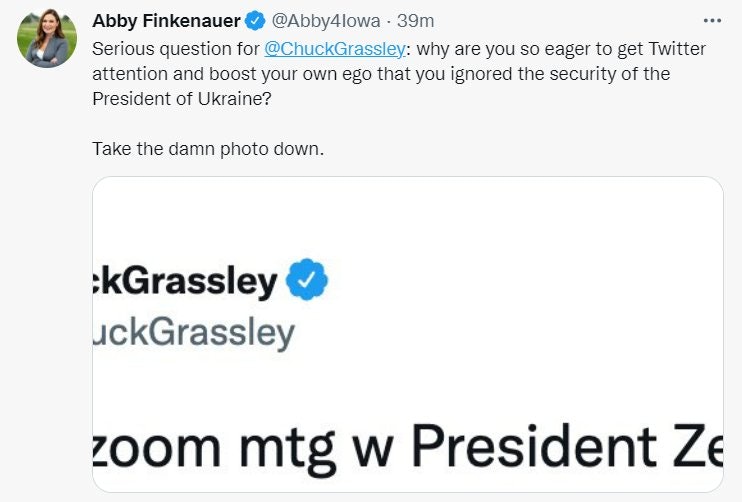 Finkenauer apparently deleted that tweet after Matt Dailer, who does work for Grassley's campaign, tweeted photos of similar images shared by Senate Democrats after the Zoom meeting with Zelenskyy.

The Grassley campaign's press secretary Aaron Britt and Dailer both taunted Finkenauer after the tweet disappeared from the Democrat's timeline. Britt did not respond to my question about whether members of Congress were asked not to share images from the Zoom.

Party affiliation has no bearing on my opinion that it was ill-advised for anyone in the U.S. House or Senate to publish photos from that meeting.

Final note: It's not clear whether any of Iowa's other members of Congress were on the March 5 Zoom. None have posted about it on their social media. Staff for Senator Joni Ernst, who has advocated for the U.S. to do more to support Ukraine militarily, did not respond to an inquiry.