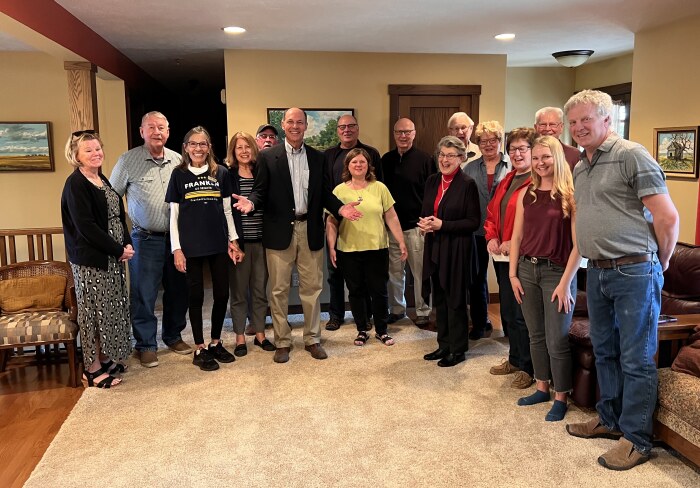 On the road with Mike Franken

Julie Gammack reports from the campaign trail. She published a version of this piece on her Substack, Julie Gammack's Potluck.

I tagged along with retired Vice Admiral Mike Franken last weekend as he campaigned in the northwest Iowa towns of Pocahontas, Storm Lake, Le Mars, and Sioux Center. This part of the state is as red as blood in political jargon. Or barn. It's so red a dead GOP candidate would likely beat a live Democrat. According to recent filings, D's aren't even bothering to field candidates in multiple legislative districts in this corner of the state.

So I was curious to see if anyone would show up for this scheduled trip. They did. 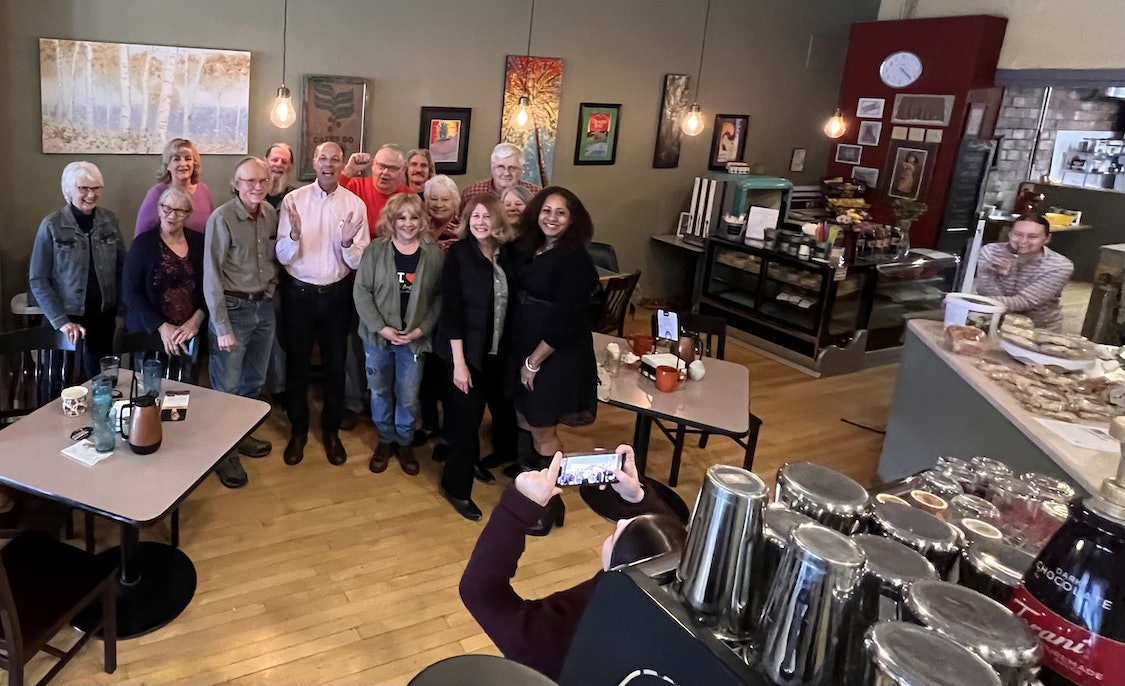 Voters attend a meet and greet with Mike Franken at The Aspen Leaf Cafe on Pocahontas, Iowa.

The Democratic Party is not dead in northwest Iowa, however. There is a pulse. There appears to be a collective feeling of resignation from a group who have tried year after year to unseat Senator Charles Grassley. And yet, Mike Franken is showing up. And they still have enough hope to show up.

Franken leaves them feeling hope. Hope that once voters learn about Franken, his Iowa roots, and distinguished career in the U.S. Navy, he will offer something no other opponent of Grassley has had. Franken is not a Des Moines lawyer. He is not a traditional politician. He could attract electoral gold in the 31 percent of Iowa voters who are affiliated with neither party.

Of course, Franken needs to win the primary before putting this theory to the test. He must win the June 7 election before taking Grassley head-on. Can he?

She wouldn't put her political credibility on the line by managing a primary race for a candidate she didn't think could go the distance.

"Every time, I think this will be the last campaign," said Stauch. "Then something comes up, and I can't resist trying to find the path to victory that fits the candidate. It's always different."

This one is different. 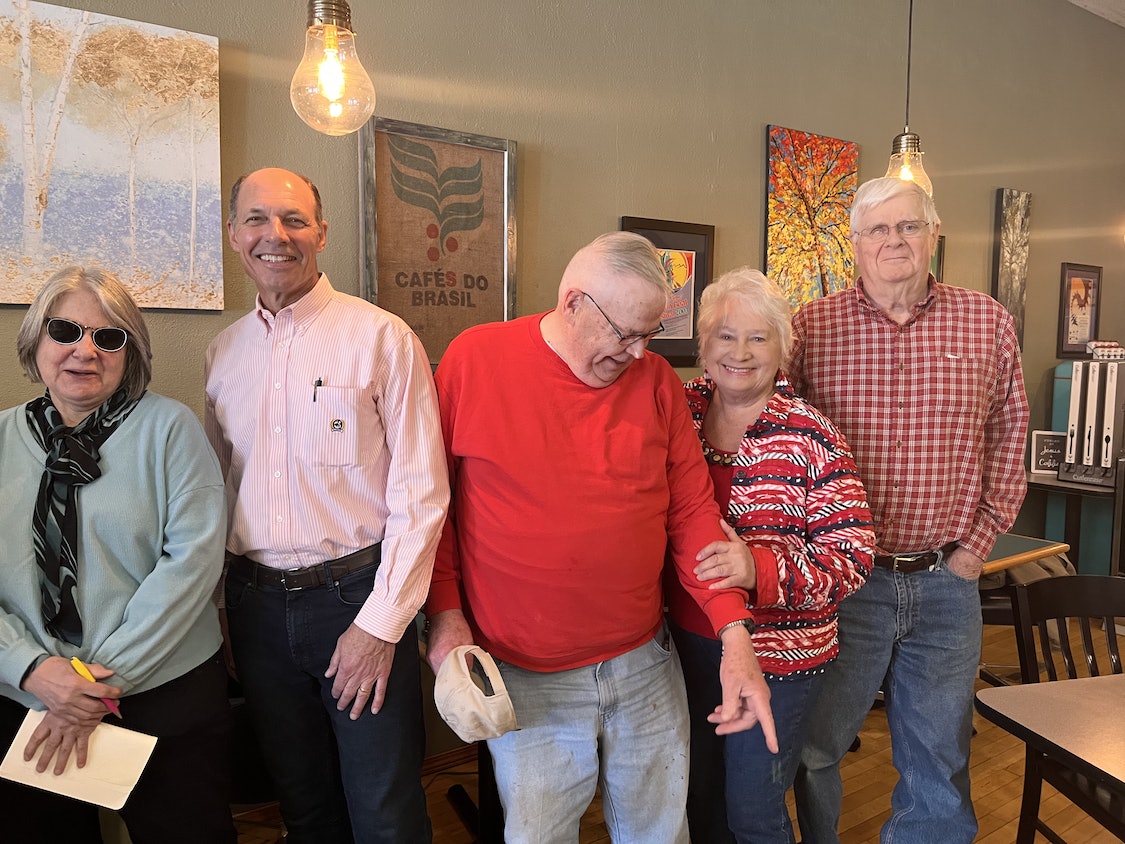 Helen Beneke of Pocahontas wrote to me afterward:

I was pleased that Admiral Franken came to our small town and that he was so interested in hearing our concerns & interests. He was responsive to our questions and I was impressed that his reactions to our comments were followed by his thoughts AND his rationale for his opinions. Most often, it seems to me, candidates and politicians have flat, pat statements, rehearsed each time he/she meets with a different group. My impression was that he personally responded to each of us and that he truly wanted to connect with each attendee. I appreciated the opportunity to meet with him!

In Storm Lake, prominent lawyers Diane and Steve Hamilton hosted a fundraiser for Franken in their beautiful lakeside home. Local observers said the turnout was surprisingly good. Franken was well received, and most attendees asked to have their pictures taken with the candidate. 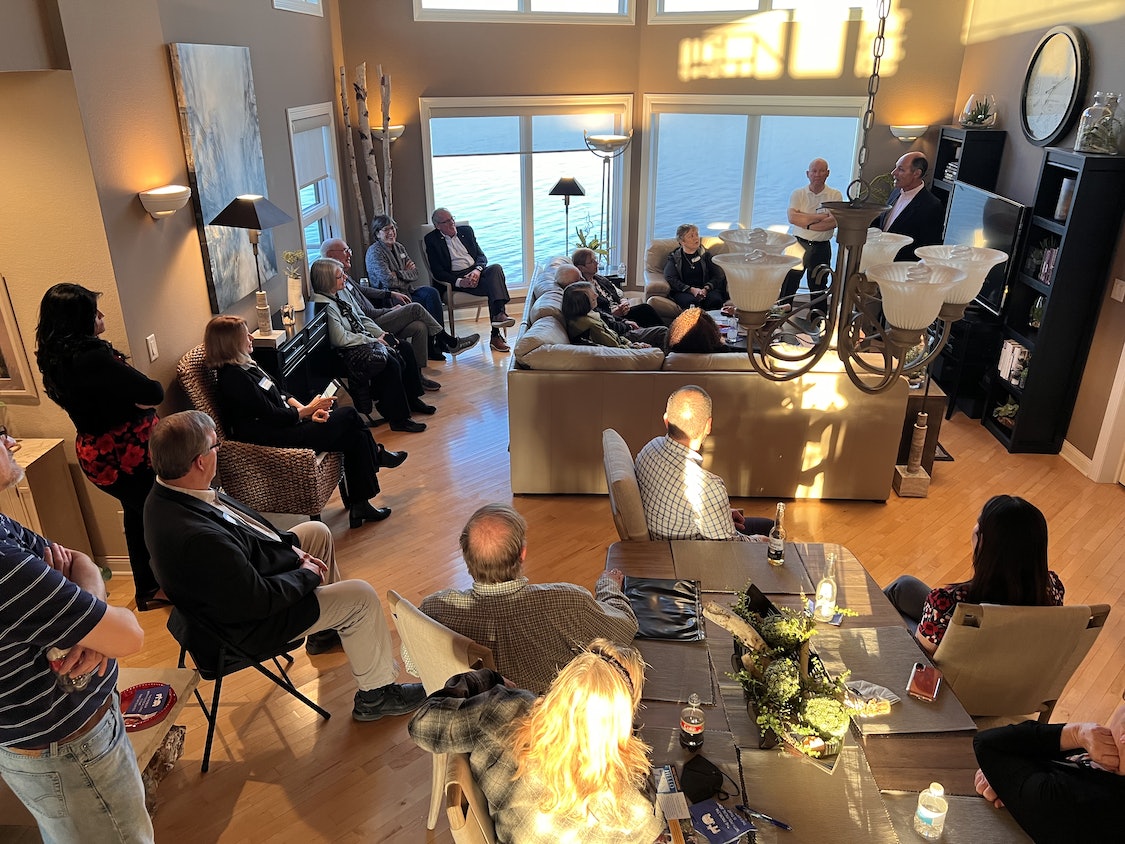 Franken fundraiser in the home of Diane and Steve Hamilton

I caught up with Diane Hamilton a few days after the event and asked how she thought Franken did. She replied,

The democrats are fortunate to have Adm. Mike Franken as a candidate for Senate. He is wicked smart and very approachable. The key to the success or this fundraiser was the time spent before he spoke to visit with him and the other attendees. It was one of the most enjoyable events that Steve and I have hosted. Our County Chair had this to say. "People, including me, were impressed."  As I was thanking people for coming many said this was a fun event. 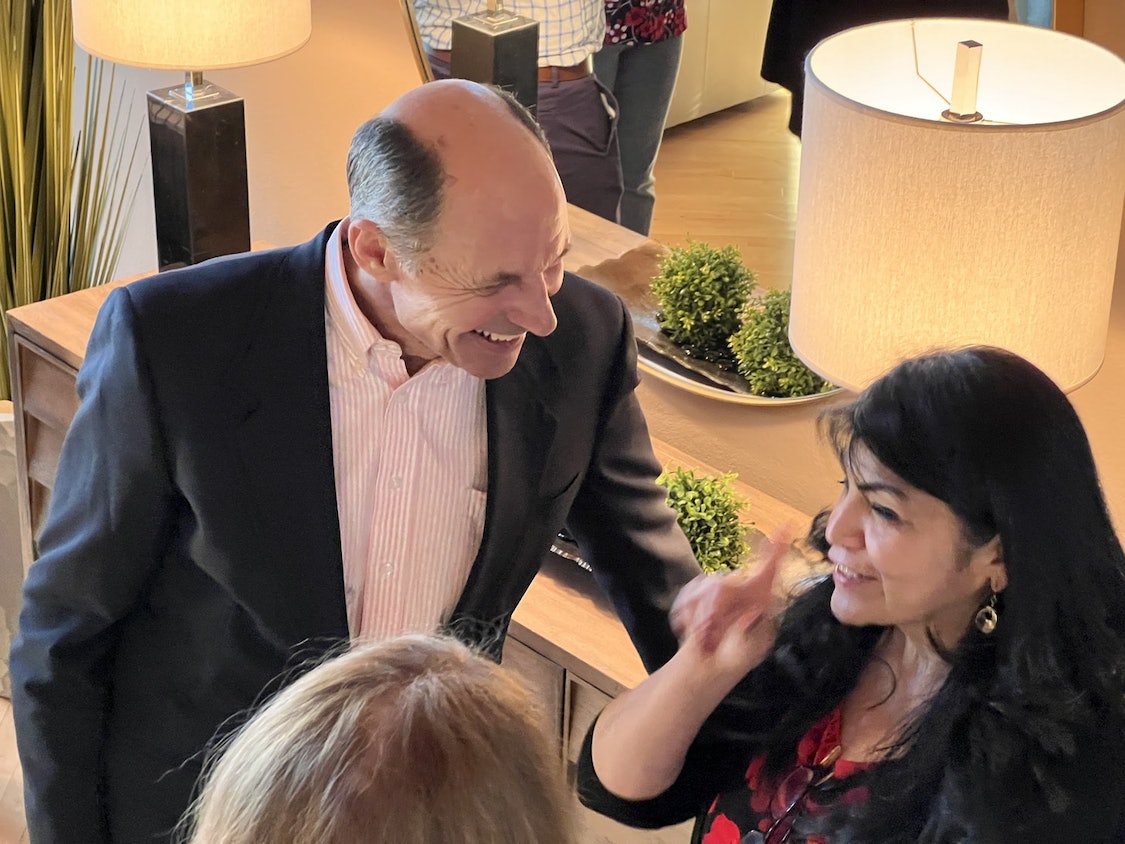 I've watched the three Democratic candidates for U.S. Senate: Abby Finkenaur, Glenn Hurst, and Franken. Iowa would be well served by any of them over Grassley. Franken's resume, his demonstrated leadership and command, northwest Iowa roots, and personal life story could give him an edge in making the case that Grassley's time is past. Especially with independents.

The Democratic candidates Grassley has faced in past races have either been Des Moines lawyers (John Roehrick and Roxanne Conlin) or under-funded, liberal legislators (Art Small and Jean Lloyd-Jones of Iowa City), or David Osterberg, who lived in a chicken coop.

Former Lieutenant Governor Patty Judge ran the last cycle, and she did better than most. She held Grassley's vote share to 60.09 percent.

Grassley has won reelection by the following percentages since winning 53.49 percent of the vote against Democratic incumbent John Culver in 1980:

These numbers have pundits believing no Democrat can beat Grassley.

Do you see how those numbers are trending downward? The last candidate, Patty Judge, is not from Des Moines. Does it make a difference?

The Des Moines Register's June 2021 Iowa Poll, conducted by J. Ann Selzer, should blow wind in the sails for the right Grassley challenger. A whopping 64 percent of those surveyed said "it's time for someone else" to occupy that Senate seat, compared to 27 percent who said they'd vote to elect Grassley in 2022. Seven out of ten female voters said they wanted to see him replaced.

A whiff of this sentiment was found during Franken's meet-and-greet in ruby-red Sioux County. A voter said he's heard folks say Grassley "has changed." And "Why is he running?" He'll be 89 on general election day. A Senate term is six years. Should age be an issue? This voter thought so. 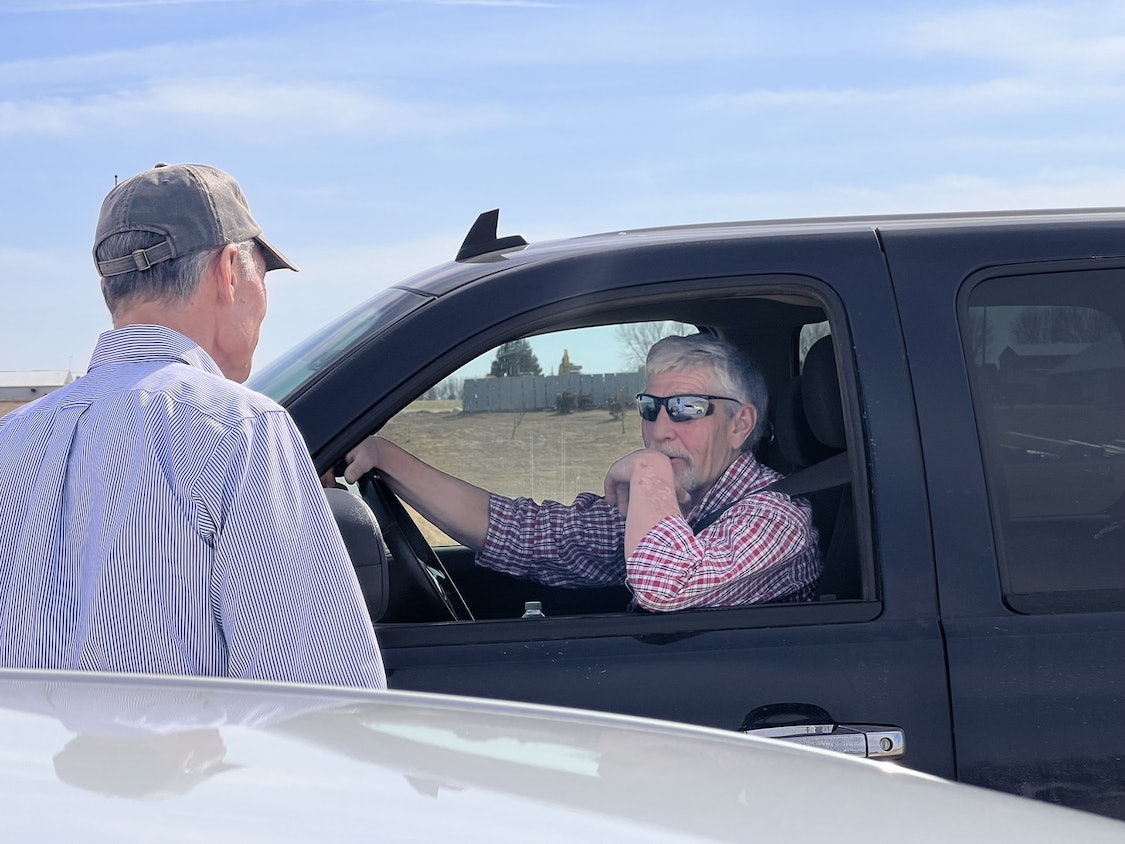 Franken is from Sioux County, having grown up ten miles away in a small town. His mother had to badger Rand McNally maps to get Lebanon, Iowa on the map. He told me about being known as a "country kid, with more of an international flair."

I traveled with Franken and his wife, Jordan, to see the house where he grew up and the creek where he learned to swim. The house still stands, but the creek that was once home to tadpoles and surrounded by the sound of birds, is now dead due to pollution. 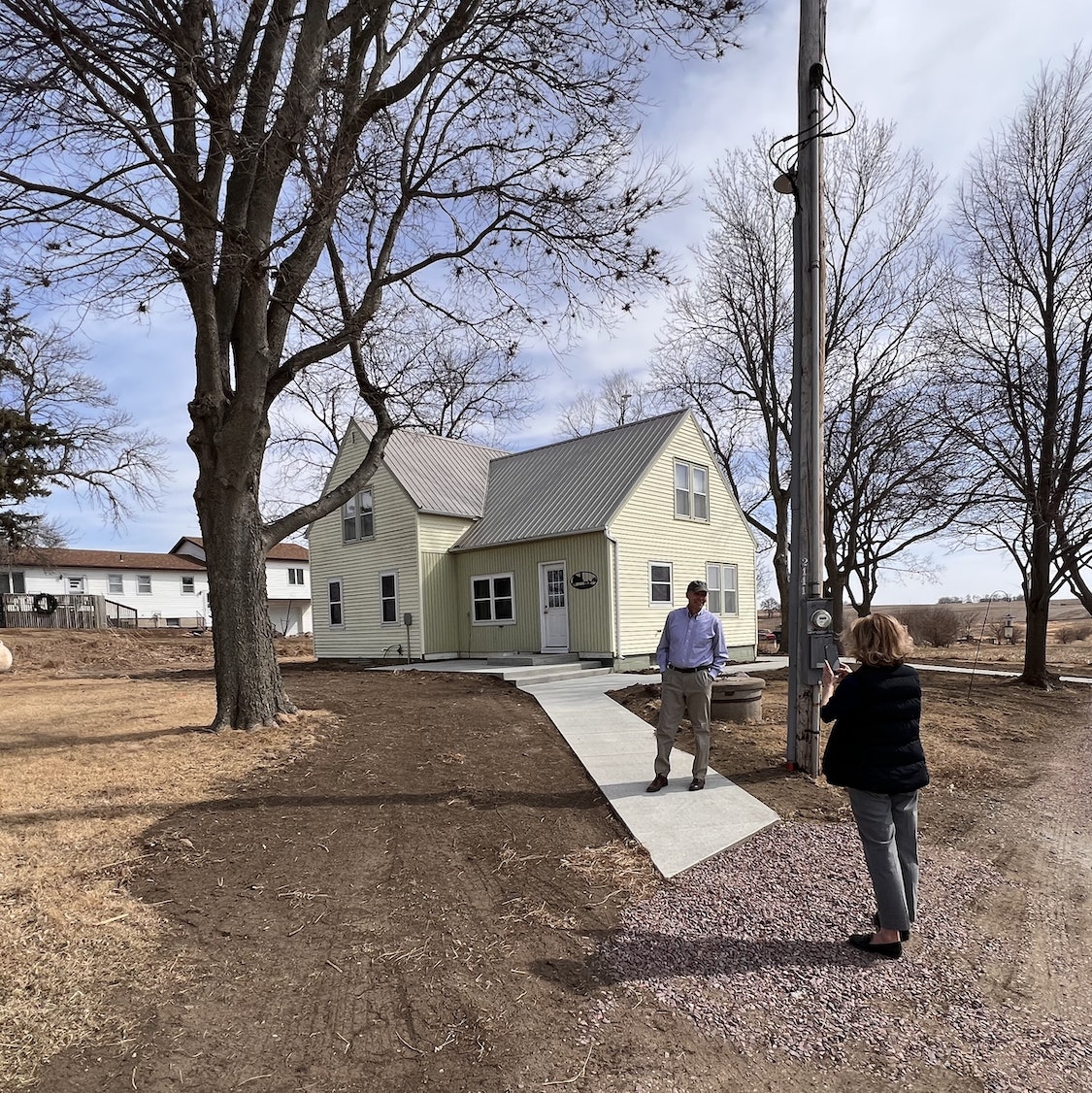 Mike Franken and his wife, Jordan, in front of the old Franken family home

Old friends and neighbors greeted him warmly, even though some will probably not vote for a Democrat, no matter how close they are personally. 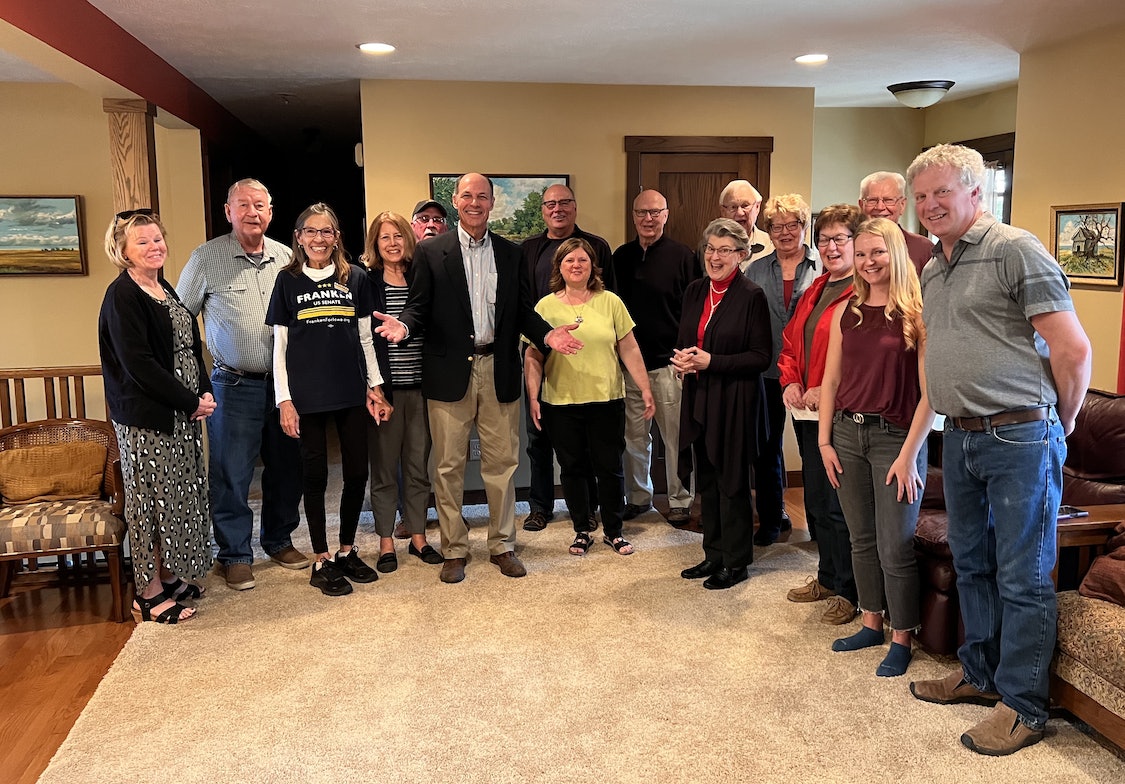 Meet and greet with Franken in the home of Dave and Ellen Mouw, Sioux Center

Still, in the living room of a local car dealer in Sioux County, Republicans and Democrats alike think it's time for a change, and Franken has their vote.

Franken will be holding events all over the state. Find one near you and see for yourself.

Editor's note: Bleeding Heartland is unlikely to endorse in any Iowa Democratic primaries in 2022 but welcomes guest commentaries by candidates or their supporters. Please read these guidelines and contact Laura Belin if you are interested in writing.