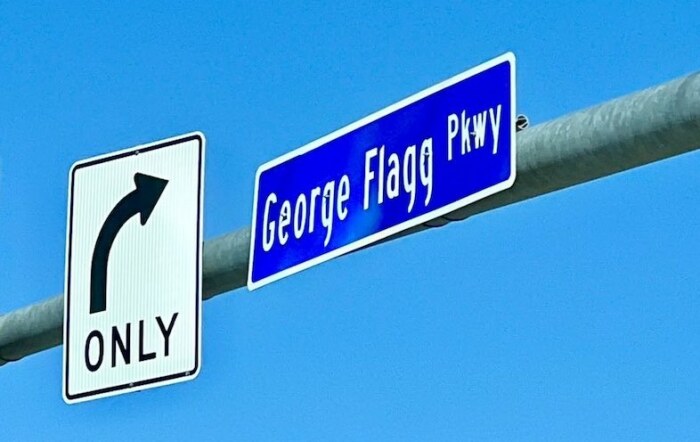 George Flagg Parkway must be renamed

The City of Des Moines will soon begin plans to make major alterations to George Flagg Parkway on the south side. The road grade will be raised several feet above the floodplain. Part of the road will also be realigned to connect to SW 30th St to avoid flooding on this heavily-used truck route.

The investment of millions of taxpayer dollars into this project should not happen without conversation around the road’s current namesake. We created our petition to showcase public support for changing the name.

In 2002, Des Moines City Council member George Flagg was retiring after holding an at-large council seat for 22 years. His tenure on the council was riddled with the well-known fact that he was xenophobic. Flagg would deny liquor licenses to any business with an "ethnic-sounding" name.

He once suspected that a business owner was operating under a fake ID. U.S. Immigration and Customs Enforcement was called on this business, causing the owner and multiple patrons to be detained.

In 2001, Flagg even voted against a city ordinance that outlawed discrimination in housing, employment, and use of public accommodations based on sexual orientation.

Despite all of those hateful actions, he was honored with the naming of George Flagg Parkway, previously Valley Drive.

When the city council approved the name change from Valley Drive to George Flagg Parkway in 2002, they did so without providing public notice or a public meeting. Business owners along the roadway learned of the change in the newspaper. This time around, Des Moines City Council must follow a transparent and open process.

We are asking the council to seek public input on what the road should be named. We need to hear feedback from community members. Since George Flagg went out of his way to cause harm to those pushed furthest to the sidelines—specifically immigrant business owners—the city must have conversations with them about this change.

The wrongdoing caused by Flagg can never be undone, but the city has a responsibility to engage with the immigrant community in this process. Des Moines must be held accountable for its racist history and present-day racism within our communities.

After news of our efforts was shared, George Flagg’s sons contacted the Des Moines City Council to share why the road should keep its current name, emailing every council member except for the sole Black council member, Indira Sheumaker. Their attempt to convince city leaders that their father was a good person became a display of the racism that is alive and well within their family.

Since our organizations began engaging with the city council in the summer of 2020, it’s become clear that racism is rooted in council. We are here to shine a light on the corruption and xenophobia within our communities. We demand: no more symbols of racism.

We have intentionally not suggested an alternative name, because we believe Des Moines residents, especially immigrant communities, should have a say in the new name.

The city council must hold a public meeting to receive input on renaming George Flagg Parkway. They must make this meeting accessible to all folks and open to feedback.