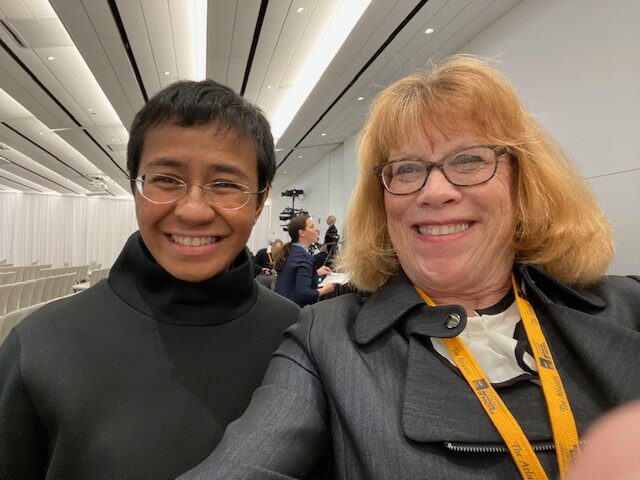 Surprising myself, I favor keeping the Iowa caucuses

Marcia Rogers divides her time between Cedar Rapids and Hyde Park in Chicago. A version of this column was first published in the Carroll Times Herald.

This wasn’t the planned first article of a three-part series I was intending to write.

After all, what would a 2021 Nobel Peace Prize journalist from the Philippines, or a Pulitzer Prize-winning author and The Atlantic contributor on Ukraine and Russia, along with a former U.S. president — or finally my supremely qualified seatmate — say that would completely upend my opinion going into today about something so very Iowan as the caucuses.

Why would anything these four shared in their remarks during Day 1 of “Disinformation and the Erosion of Democracy” conference at the University of Chicago turn my world of thought on this topic upside down?

I went into the heady presentations ready, as I was trained to do by a journalist friend and mentor, to be able to ask a thoughtful question at the drop of a hat.

And the question I had prepped to pose to President Barack Obama or David Axelrod (his 2008 chief campaign strategist and now the Founder/Chair of the Institute of Politics at the University of Chicago), was simply this as I quote my notes: “Should Iowa maintain its first in the nation caucus status, and should there be any caucuses anywhere in the U.S. at all?”

The question did not get presidential attention due to time running out, but I knew what their answers would be, in my Carnac the Magnificent (dating myself) take on this whole topic.

There was no way this outmoded and inconsequential voter sentiment process was going to draw anything but guffaws from these presenters if they were asked, was my best hunch. When in fact, as I listened again tonight to the tapes I made of their remarks from today, and combed through my notes, these vastly different presenters wove a common thread throughout their presentations that woke me up and caused me to do an about face on my own earlier naysaying projections.

Surprising myself, I think the Iowa caucuses need to stay in place, but most definitely improved — a story for another day.

I was just three blocks away from the conference venue in Chicago when I pulled out my notepad and sat on a campus bench and wrote myself one reminder word on my already filled Reporters Notebook: transparency.

Transparency is a reason to keep the caucuses alive.

No bots are allowed.

It’s hard for Russians to hack into someone’s living room or community hall, and Facebook isn’t allowed to count the votes.

While we let our own technology shortcomings upset the results during the last flawed Iowa caucuses, democracy in action in Iowa via the caucuses should not be booted out because of mismanaged technology.

We can do better and we need to make the caucuses more accessible and manageable for all.

Maria Ressa, the 2021 Nobel Peace Prize-winning journalist who was born in the Phillipines and raised in the United States, had a college roommate from Cedar Rapids during her undergraduate time at Princeton University, and the two still keep in close touch. 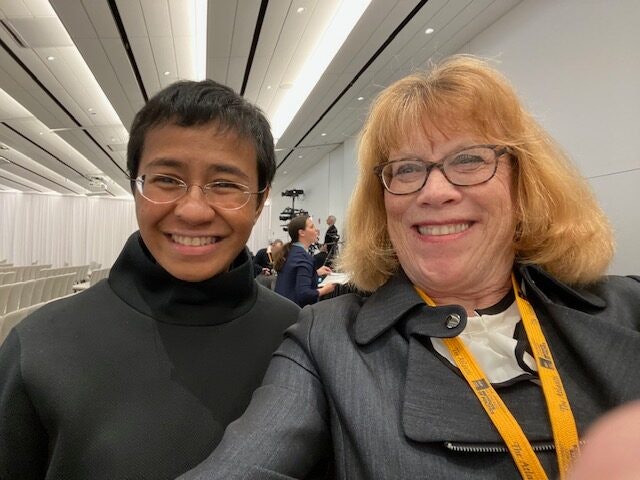 These are the kinds of connections that keep us all within six degrees of separation even at a conference of strangers.

She described her continued harrowing times combating Facebook and other online platforms in a country — the Philippines — that has arrested her and forced her to make bail 10 times.

She takes on Facebook’s algorithms as impacting our democracy, using “free speech to stifle free speech.”

Her attacks on what she refers to as “surveillance capitalism,” when data is sold to the highest bidder and disinformation removes any integrity of facts.

Ressa, who is Filipino-American, warned the audience that we need new information ecosystems to be created much like a United Nations for protecting journalistic freedoms.

Anne Applebaum is an Eastern European expert, historian and author. Her recent writings on the Russian invasion of Ukraine are stunning, frightening and deserving of more than a paragraph summary. Applebaum, U.S. born and raised, is married to a Pole and lives in Poland.

She walked the audience through Russia’s earlier disinformation campaign in Ukraine beginning in 2013, creating and amplifying divisions within Ukraine.

Ukraine has since united and pushed away these attempts to divide their country and Applebaum believes this then led Russia to just invade. She cautioned that Russia has become masterful at targeting their messaging to distinct U.S. audiences and markets while we have had little curiosity about targeting various Russian audiences with similar microtargeting.

Former President Obama, calling Ukraine a “tragedy of historical proportions,” spoke of Russian President Vladimir Putin’s ability to harness anger in a system with no checks and balances, and the “toxic mix” that occurs in the hands of an autocratic government. 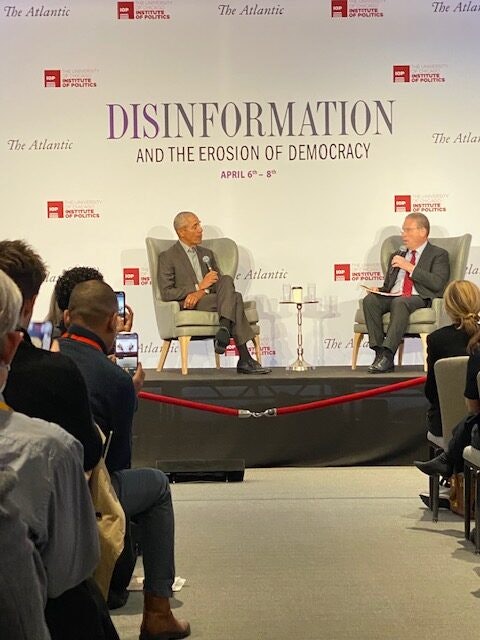 Obama added that this is a bracing reminder for democracies that have gotten “flabby, confused and feckless” and that we have “gotten complacent” in protecting freedom of the press.

He cited the impact of social media platforms on feeding disinformation campaigns, and used the statistic that 30-40 percent of Americans refuse to believe that COVID-19 vaccines are safe, when they have been distributed successfully to billions to date.

People like outlandish falsehoods, he went on to say: “there is a demand for crazy that we have to grapple with.”

He ended his remarks by saying we need to train the next generation to participate in democracy and not just virtually.

Lastly, when I asked my seat-mate Ben Smith—formerly of BuzzFeed and the New York Times, now with the global startup Semafor—about the viability of the caucus process, he told me to ask Obama, adding he wouldn’t have been president without the Iowa caucuses. 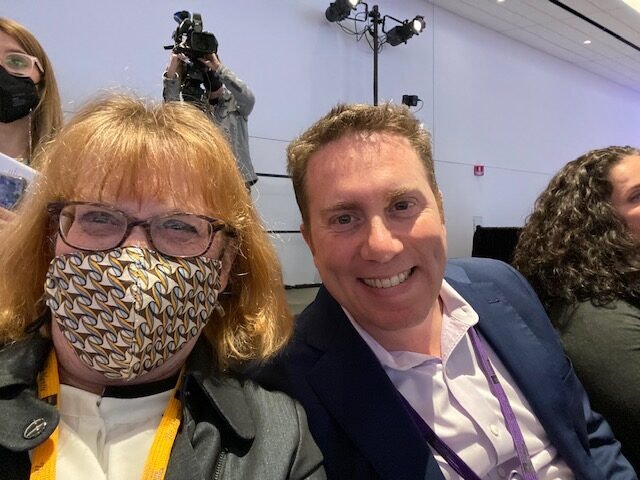 The South sat up and took notice that a Midwestern white state like Iowa said yes to a Black civil rights lawyer from Chicago whose name rhymes with Osama, and they gave him a serious look as a result and the rest is history, Smith said.

Marcia Rogers attended “Disinformation and the Erosion of Democracy," a conference at the University of Chicago’s Institute of Politics that was also sponsored by The Atlantic. 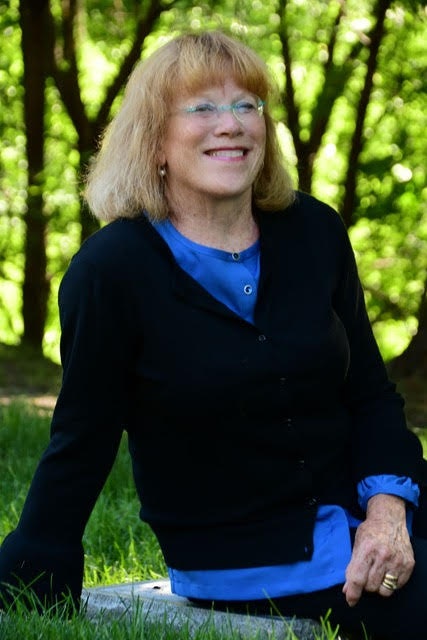 All photos in this post, including the top image of the author with Maria Ressa, were provided by Marcia Rogers and published with permission.