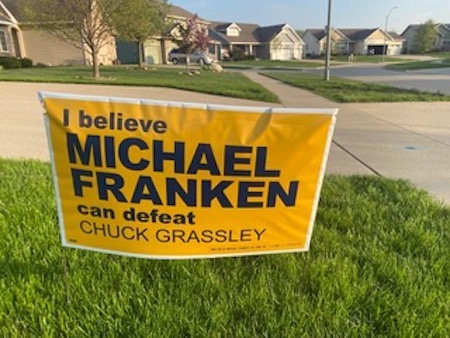 American democracy is on the ballot. Electing people who support and will defend our democracy tops my priorities.

I voted for Senator Chuck Grassley, multiple times. Unfortunately, Grassley no long supports democracy.  He condones Donald Trump's Big Lie about the 2020 election, supports voter suppression, opposes the renewal of the Voting Rights Act (which he previously voted for), voted twice to acquit Trump, and opposed a bipartisan January 6 commission. When Grassley chaired the Senate Judiciary Committee in 2016, he refused to give U.S. Supreme Court nominee Merrick Garland a hearing.

So who stands the best chance of unseating Grassley? I have nothing against Abby Finkenauer. She supports democracy and many policies that I favor. Though the fact that she had to win an Iowa Supreme Court case over her barely sufficient signatures to qualify for the ballot does not speak well of her campaign’s competency.

I strongly believe that Mike Franken has the best chance to win in November. Franken’s roots are in rural northwest Iowa, born the eighth child to a rural schoolteacher and repair shop owner. He worked his way through college, including in a meatpacking job. He served our country in the Navy for almost four decades, rising to the rank of three-star Admiral. He worked for Teddy Kennedy and Barack Obama.

When he led U.S. forces in East Africa, Admiral Franken pulled the plug on Fox News during meal times. Franken’s policy positions place him solidly in the Democratic mainstream.

For me the choice in November will be easy, whether the Democratic candidate is Franken or Finkenauer. Democrats support democracy and most Republicans don’t anymore.

But Grassley will not be easily defeated. He’s still riding decades of name ID and service from before, when he had integrity. And Iowa tilts increasingly red.

Under these circumstances, Mike Franken has the best chance of motivating pro-democracy Republicans and independents, as well as Democrats. Please join me in supporting Mike Franken in this primary on June 7.

Top photo of a Franken campaign yard sign provided by the author and published with permission.