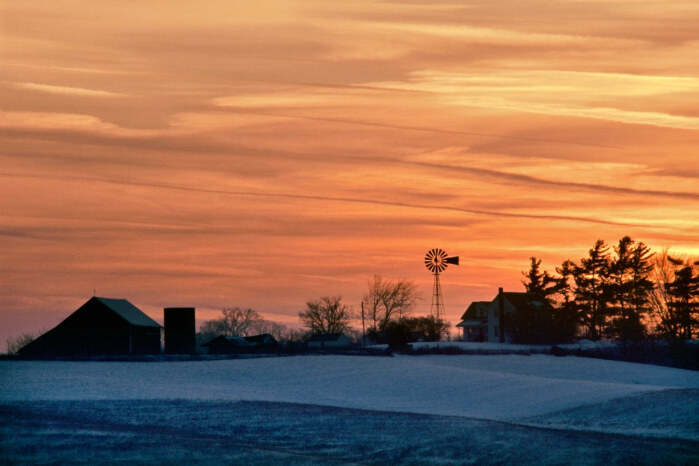 Larry Stone reviews Neil Hamilton's new book The Land Remains: A Midwestern Perspective on our Past and Future.

Many of us baby boomer farm kids recall growing up in the 1950s and 60s walkin’ beans, baling hay, quail in the fencerows, and “the back 40.” But you don’t need a time machine to recapture that era, or to ponder the future of Iowa agriculture. Just read The Land Remains, by Neil D. Hamilton.

Raised on an Adams County farm, Hamilton earned forestry and law degrees before becoming director of the Agricultural Law Center at Drake University in Des Moines. He recently retired after 36 years. His memoir traces his growing awareness of how our agricultural policies have shaped not only the land but also the very fabric of our society.

“….. farming at its essence is all about joy,” Hamilton writes.

Being able to harness sun, rain, and seeds to create new wealth; to work with livestock to bring forth new generations of animals; to work the land to feed the nation and support the family, and working to sustain our future can be and has made farming one of the most fulfilling careers possible.

But Hamilton is troubled by Iowa’s not-so-joyful transition from 200,000 small, diverse family farms into one-third that many industrial scale operations. He offers a sobering analogy between Appalachia and Iowa. Appalachian farmers lost their autonomy to economic, social, and environmental degradation brought on by the extractive coal and timber industries. The Iowa extractive industries are corn and pigs.

“We are essentially mining our soil and water resources, extracting fertility and future productivity to raise crops used for industrial purposes or export,” Hamilton says of our corn ethanol and hog confinement focus.

Can we learn from history? Hamilton celebrates the contributions to conservation by Iowans John F. Lacey, Aldo Leopold, Henry A. Wallace, and J. N. “Ding” Darling.

Hamilton admires Leopold’s “land ethic,” that humans have a moral duty to care for the “land,” including all of nature.

He returns often to that theme, suggesting that public policies in the 1930s and 40s acknowledged the importance of soil conservation. But “by the end of the 1950s the vision and leadership to carry on the soil conservation work identified with FDR’s era was largely abandoned, replaced by the economic determinism still haunting farm country today.”

To be sure, farm organizations and the Iowa legislature came to agree on Iowa’s voluntary Nutrient Reduction Strategy (NRS) – which will supposedly reduce nitrogen, phosphorus, and other nutrients leaving farm fields and flowing to the Gulf of Mexico. Unfortunately, Hamilton writes, the NRS “can best be summarized as high hopes and best wishes, or less charitably, faith in magical thinking.”

A lost cause? Not at all! Hamilton takes heart in the “rustling whispers of doubt” he’s hearing from people who are concerned “about the food we eat and what it means for the land.”

To help tell the story, Hamilton enlists the occasional voice of “The Back 40,” a perceptive plot of land hidden in the center of his home farm. Noting, for example, how some landowners are struggling to recreate prairie after their ancestors broke the virgin sod 150 years ago, The Back 40 wryly observes that “my time frame is so different than yours.”

There’s a growing movement of “eaters who yearn to buy food raised by people they know on land they can visit,” The Back 40 adds. That can mean anything from a dozen eggs from your Amish neighbor to a package of Niman Ranch pork to fresh greens from a local farmer’s market.

Hamilton cites World Food Prize recipient D. Rattan Lal, of Ohio State University, who proposed a federal “Healthy Soils Act” that could stand with the Clean Water Act and the Clean Air Act to highlight the importance of healthy soils to human health. And perhaps to the soil’s role in slowing or reversing climate change.

We need leaders with the vision to make changes, Hamilton says. He praises groups like the Practical Farmers of Iowa and the Iowa Natural Heritage Foundation for their innovations in farming practices, land ownership, and conservation. When Hamilton needed to sell part of his family’s land, he made sure it went to a young farmer with a commitment to keeping it healthy, rather than to an absentee investor.

“It may be hard in stressful times to think about the land as a priority,” the author writes, acknowledging society’s seemingly perpetual social, economic, and political upheavals.

“The truth is, now is an excellent time to focus on Land because it is enduring and it provides a source of hope . . .”

The Back 40, also hopeful, expects a “spark of imagination” from scholars like the boy who went away to law school.

“My hope is you will find the genius in the law and the imagination in your hearts to protect me,” The Back 40 says, “and to make it possible the land remains.”

Larry Stone explored Iowa for 40 years, both as an outdoor writer/photographer for the Des Moines Register and as a freelance nature writer and photographer. He has written five books, and his work has appeared in several conservation magazines. He is a member of the Clayton County Conservation Board. He and his wife, Margaret Stone, manage woodlands and prairies on their farm along the Turkey River near Elkader.

Top photo by Larry Stone of a Clayton County farm provided by the author and published with permission.