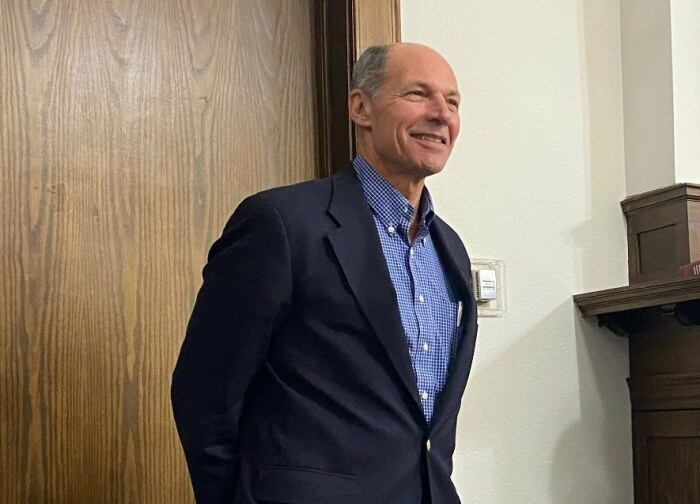 The first time I met Vice Admiral Michael Franken, we were both set to speak at an Urbandale Area Democrats meeting during the 2020 election cycle. Mike was running in the primary to face Senator Joni Ernst, and I was briefly dipping my toe into state politics (side note: don’t run for office based on an ideological binge).

Mike went first and captured my attention immediately. He exudes a calm and genuine demeanor, and every idea and policy proposal is well thought out. I asked him about gun control, which a lot of Democratic candidates wouldn’t touch publicly when I asked. Mike not only said he was in favor of common-sense gun laws, but also had (as I have now come to expect) a detailed proposal. I was extremely impressed.

I mentioned Mike to my Dad, who still lives in my hometown in southwest Iowa, and he went to see Mike when he came to town. I trust my Dad’s opinion and gut instinct on people, so I was eager to hear his impression.

I was surprised to hear the first words out of my Dad: “I am pretty disappointed.” I thought for sure Dad would like Mike, so I followed up with why? “Because he’s not running for president. He is overqualified for Senate.”

I later went with my wife to a house party for Mike in Urbandale and mentioned my Dad being impressed with him. Mike remembered specifics from their conversation. While my Dad is a “talker” and most people remember him, it was nice to confirm that Mike engages with people.

Fast forward to this election cycle. I kept in contact with Mike after the 2020 primary. He was gracious enough to even join a call I helped organize with a group of other activists, to do a post-mortem on that year's general election. I was once again impressed, and I began to pester Mike privately to run against Senator Chuck Grassley. I am not conceited enough to believe I was a factor in his decision, but I was beyond thrilled to see the news he was running in 2022.

Grassley has been in elected public office non-stop since Dwight Eisenhower was president. Actually sit and think about that for a minute: Eisenhower. If there’s a poster child for entrenched power in Washington, it’s Chuck Grassley. He refuses to retire and give up that power, so it is up to Iowans to force his retirement.

At one time, although I strongly disagreed with Grassley's politics, I believed the senator was honorable and had Iowans’ best interests at heart. That was a long time ago. Grassley has shown he is completely corrupted by special interests and the quest to hold onto power. Iowa needs a senator who works for them, not special interests. When I see the motto “Grassley Works,” I often chuckle to myself and finish the slogan with “for his big donors and special interests.”

Mike will defeat Chuck Grassley, if Democratic voters give him the opportunity. When voters take the time to talk to him, they come away impressed. Every time. Even if you don’t agree with all his policies, he makes an impact and earns your respect. That’s why, if you look closely at Mike’s endorsements, they come from a wide variety of folks, across the spectrum.

Aside from my personal feelings about Mike, he has what we need to defeat Grassley. As mentioned above, Mike has concrete ideas for anything anyone has asked him about in my presence.

I understand that in this age of sound bites, some people think being overly detailed can be a negative. If you ask Mike about a complex issue, he won’t give you a sound bite. You need to prepare for a sometimes-lengthy discussion on what the core issue is, the root cause, and the steps we need to take to fix it, particularly in circumstances that require a multi-pronged and long-term solution. When Mike campaigns around the state, people will respond positively to that quality.

I believe Mike is well positioned to defeat Grassley for another reason as well. Mike’s experience in Washington, D.C., working in Congressional affairs, gives him insight into how Grassley has operated over the years. That will allow him to provide a unique perspective on Grassley’s record of increasingly partisan obstructionist politics.

Mike is from northwest Iowa, and his hometown knowledge, if you will, will help mitigate the clobbering Democrats have been taking in the fourth Congressional district. Mike was raised in the area, on a farm, and did work growing up that people in IA-04 are familiar with. At the end of the day, making that connection is how you win undecided and swayable voters. To win statewide, Democrats must cut the margins in IA-04—that is critical. Mike will do that. I think Mike has a chance to finish within 5 to 10 points of Grassley in IA-04, and that could make Mike’s win statewide a rout.

Finally, Mike is possibly the most erudite person I have met, but he also has the rare ability to use homespun wisdom in a way that is natural and does not come across cynical or forced. An example:

Solving our gun problem with more guns is crazy. You don't add water to a flood.

Going back to my Dad, this is the kind of thing he would say, and something that would resonate with him. Same with my Mom. Same with my father and mother-in-law in IA-04. We need a Democratic candidate who talks to people, not at people. We need someone who can break through the misinformation haze of talk radio and Fox Entertainment (I stole that from Mike) to really connect with people again. That is Mike Franken.

I have many reasons why I support Admiral Franken, but for those still undecided as polls open on Tuesday, it really boils down to your answer to this question: Who can defeat Chuck Grassley?

Top image cropped from a photo posted on the Franken campaign's Facebook page on May 24.