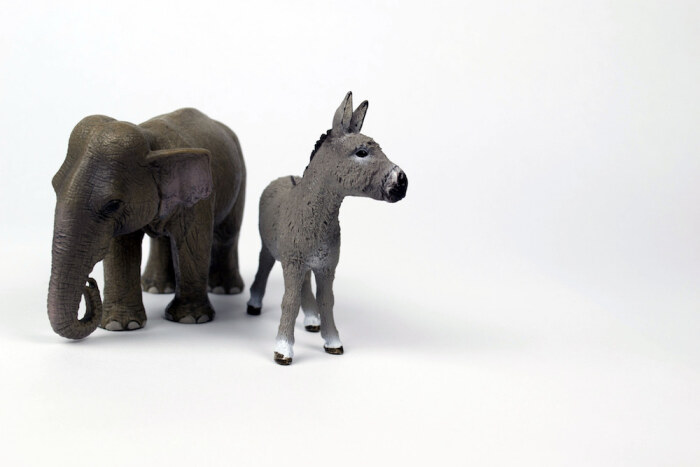 Steve Corbin is emeritus professor of marketing at the University of Northern Iowa and a freelance writer who receives no remuneration, funding, or endorsement from any for-profit business, nonprofit organization, political action committee, or political party.

Hypocrisy (noun); behavior that contradicts what one claims to believe or feel; synonyms include insincerity, piousness (Merriam-Webster).

The behavior of today’s mainstream political parties often meets the definition of hypocrisy; one would be hard pressed to deny that they sometimes attempt to hoodwink Americans.

Some people believe every syllable uttered by their party of preference, only to find out they’ve been duped once again. The marketing principle of caveat emptor (let the buyer beware before purchasing a product) applies to many GOP and Democratic Party dogma statements.

Most Republican politicians want open-carry gun rights. But, at the National Rifle Association's convention in Houston from May 27 to 29, attendees were not permitted to have guns—to protect the safety of former President Donald Trump. Let’s see. Guns are safe in public spaces. Wait. Guns are not safe.

Republicans in Congress tried more than 70 times to “repeal and replace” the Affordable Care Act. However, when they had the governing majority from 2017 through 2020, they didn't manage to enact any repeal and replace plan.

Senate Majority Leader Mitch McConnell of Kentucky and then Senate Judiciary Committee chair Chuck Grassley of Iowa refused to grant Supreme Court nominee Merrick Garland a hearing for months prior to the 2016 election. But Senate Republicans confirmed Amy Coney Barrett to the high court eight days before the 2020 election, when some 65 million Americans had already voted.

Republicans call themselves "pro-life" yet are proponents of the death penalty, tearing babies away from their parents at the border, even locking some up in cages. Some support cutting the federal Supplemental Nutrition Assistance Program (commonly known as food stamps), which benefits children.

Today many Republicans criticize the House select committee investigating the January 6 events. Yet last July, U.S. House Minority Leader Kevin McCarthy promised the GOP would run its own investigation of the attack on the Capitol, which never came to fruition.

Renee Loth observed in a Boston Globe column from August 2021, “Republicans stand by their firm belief that free Americans should never be required to show their papers to Big Brother. However, when it comes to voting, they want to impose all sorts of strict ID requirements.”

At one time, Republicans were the get-out-the-vote party. After the 2020 election, GOP-controlled state legislatures proposed more than 250 bills to restrict voting—Jim Crow on steroids.

Democrats aren’t always much better. Democratic politicians claim to detest unregulated campaign funds. Yet a New York Times analysis published early this year found "that 15 of the most politically active nonprofit organizations that generally align with the Democratic Party spent more than $1.5 billion in 2020 — compared to roughly $900 million spent by a comparable sample of 15 of the most politically active groups aligned with the G.O.P."

Democrats claim to be the working-class party. However, Jonah Goldberg claimed in an opinion column published last year, “the single most expensive item in the House version of the Democrats’ Build Back Better bill is a gigantic tax cut for millionaires and billionaires.” The proposal to raise the cap from $10,000 to $80,000 on income tax deductions for state and local taxes would overwhelmingly benefit the top 20 percent and especially the top 0.1 percent of earners.

Jelani Cobb, Columbia Journalism School’s forthcoming dean, summarized both parties' hypocrisy in a manner that should cause all registered voters to question any candidate or party stance:

The Democratic and the Republican Parties have endured as long as they have because they have significantly altered their identities to remain viable; in a sense, each has come to represent what it once reviled.

Registered voters should demand political parties quit speaking with a forked tongue, which is destroying our democracy. It’s sad that citizens who vote the party line are being misled left and right, pun intended.