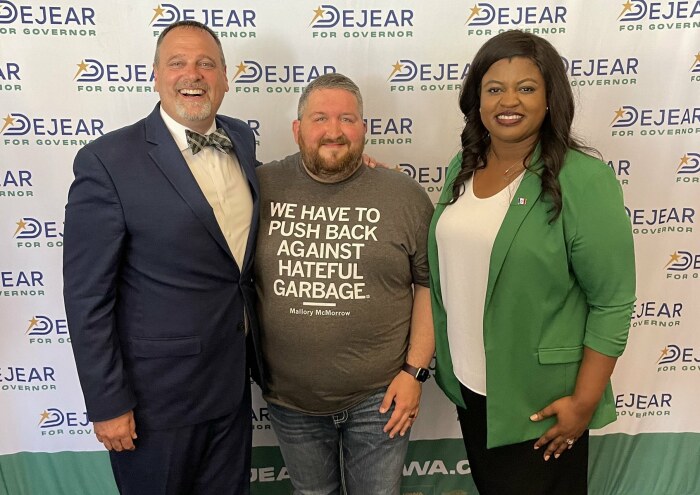 Politics ain’t beanbag. If Deidre DeJear is our prize fighter, then Eric Van Lancker is her corner man.

By selecting Van Lancker to serve as the lieutenant governor nominee, DeJear acknowledged the tough fight Democrats are in to reclaim Terrace Hill this November.

Van Lancker, the Cedar Rapids native and four-term Clinton County auditor, holds a rare distinction among Iowa Democrats: he has won two elections in which Donald Trump was at the top of the ballot. There’s a reason for that: Eric is seen as a kind, reasonable family man who brings people together. It’s one of the reasons I was the first county party chair to endorse him in his bid to become our nominee for secretary of state.

More than his good nature and even temperament, Eric Van Lancker is known for being relentlessly competent (a trait sorely lacking in officials currently running for governor). Just weeks before the 2022 primary, Auditor Van Lancker caught a mistake in the secretary of state’s election advertising, which suggests he understands the state’s arcane new voting rules better than the cartoonish villains who advocated for them.

It’s the kind of thing you want in a running mate, and experience in local government will be valuable when this history-making ticket takes office.

By contrast, Deidre DeJear is a sort of reverse-homecomer. The 36-year old Drake University grad went against the grain of many of her peers and decided to stay in Iowa after starting a small business while still in school. The Mississippi native has spent more than a decade helping business owners hone their entrepreneurial skills and make tough choices.

She is smart, steady, and she gives a damn.

DeJear’s experience in business serves as a parable for her decision to run for governor of this state–a purple-vote prairie that gets portrayed as Texas-lite, written off by the DC pundits who think it’s a lost cause in 2022.

But Deidre doesn’t buy that analysis.

You can’t get tired, she reminds folks in rural diners, because there’s no time to sleep–not yet, anyway. We’ve got too much work to do. And Iowa is worth the work.

In politics, as in business, DeJear is the first to admit it’s not always easy–sometimes the math just doesn’t add up. For every tough conversation, though, there are numerous other examples of dreams realized. Iowa’s a tough customer for Democrats, but for DeJear, the math is there. And with Eric Van Lancker at her side, she’s ready to bring balance back to Iowa government.

The allure of DeJear’s bid to unseat a sitting governor is a business model rooted in self-actualization: the candidate is the vehicle, but the voter is the driver. She’s not taking you anywhere you don’t want to go. You’re building your own best version of Iowa. And the ability to shape your own destiny is a powerful thing. Nobody expects you to believe one woman can solve every problem. Our next governor will face a myriad of challenges, and we’re being asked to place our faith in our collective desire to live better, together.

At a recent campaign stop in rural Brayton (population 111), 70 people listened intently as DeJear, in response to a question about the current administration’s attacks on public education and LGBTQ people, recalled her time as a basketball coach at East High School in Des Moines. “Those were all my girls. It didn’t matter where they came from or what their parents looked like, they were all important to the team. That’s what this is about, folks. We’re all in this together,” she said.

You could hear a pin drop. The candidate had connected with her voters. And she'll keep doing this all over the state—now with Eric Van Lancker at her side.

Our nominee and her running mate are clear-eyed about the challenge they face. Though they hail from different backgrounds, traditions, and perspectives, the road they’ve traveled has brought them together at this critical moment for our state. They’re ready, if Iowans will have them.

I think we will.