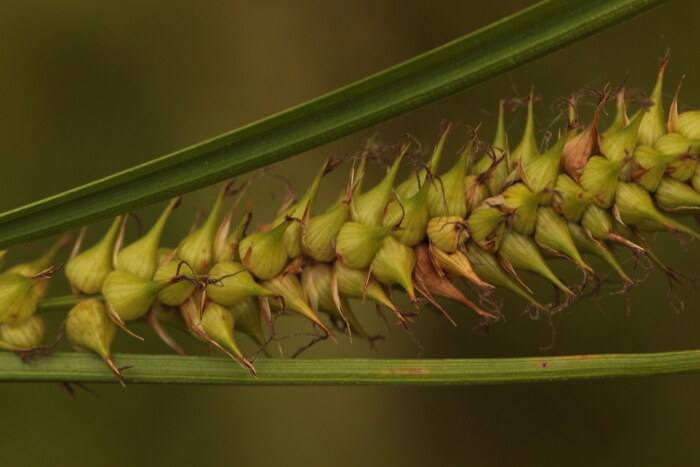 Leland Searles is consultant and owner of Leeward Solutions, LLC, a company that offers regulatory and non-regulatory environmental services. For more information, see Leeward’s website at http://www.leewardecology.com. All photos of sedges enclosed below are Leland's work and published with permission.

You have walked on them, looked at them, maybe even pulled the seed stem to nibble on the tender base, as though it were a grass. But it isn't.

Sedges are an important, often overlooked group of native plants. In Iowa there are at least 125 species belonging to one genus, Carex.

Carex sedges often are overlooked because they look so much like grasses. And with wide variation in their appearance and very tiny details, they are a daunting group of plants to learn. But with patience, those details also lead to small moments of awe and wonder at the different symmetries and adaptations of each. 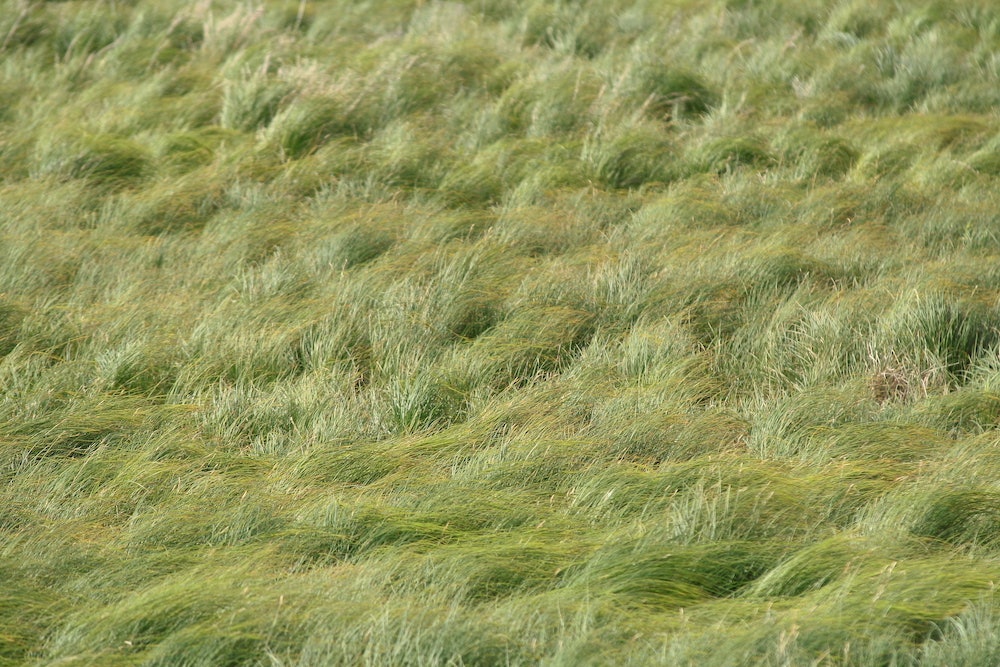 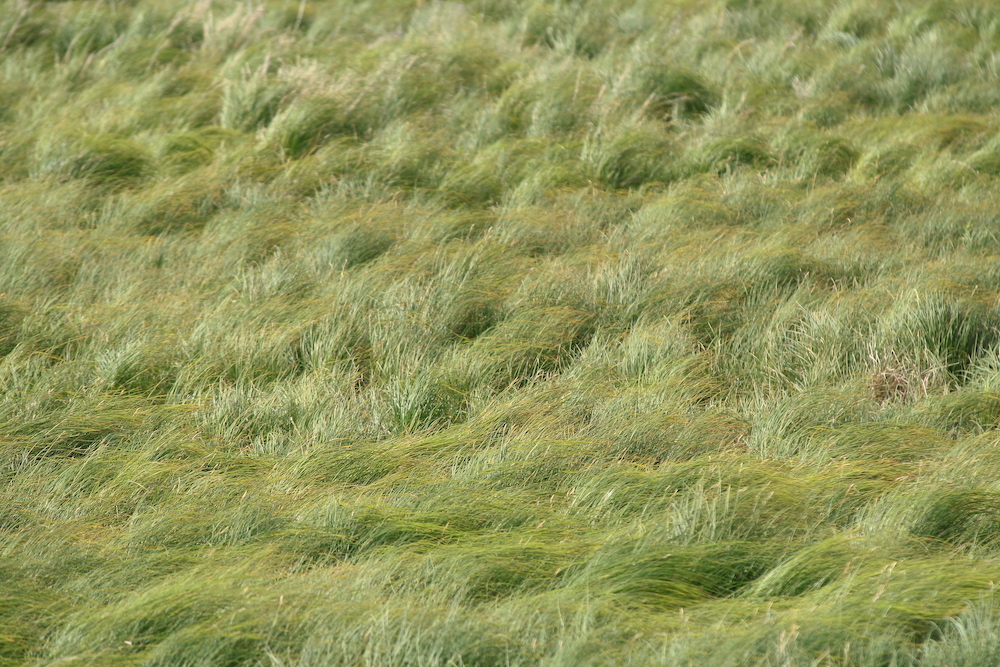 Sedges provide food to several kinds of native birds, insects, and rodents. Their roots help hold topsoil in place. They are used by botanists to identify ecosystems and plant communities, and by wetland restoration specialists to diversify the vegetation.

These plants occur in every kind of ecosystem imaginable in Iowa: the dry tops of the Loess hills, the shallows of ponds and lakes, established remnant prairies and woodlands, and recently disturbed ground. To begin the challenge of identification, your familiarity with a few technical terms and plant parts is helpful.

The most essential part of a sedge to know is the perigynium (pear-uh-GIN-ee-um), which is a sedge's seed and its outer husk. The mature perigynium (mid-June to mid-July for most) provides the most reliable clues to the species. It encloses the seed, which is not visible unless the husk is opened.

Identification of sedges is based on: 1) habitat, 2) the arrangement of female and male flower spikes on the stem, 3) the orientation of the perigynia along the stem of each spike, 4) the details of the perigynium, 5) features of the collar, where the leaf blade meets the stem and forms a sheath around the stem, and a few other features.

For example, a sedge that grows in a permanent shallow wetland and sits atop a small hummock of soil is one of only a few species, so habitat and growth pattern narrow the choices. A short sedge that appears in April or May in woodlands, flowers during that time, and sheds its seeds (perigynia) in late May almost certainly is Pennsylvania sedge (Carex pensylvanica), common in the state’s wooded ravines and slopes. 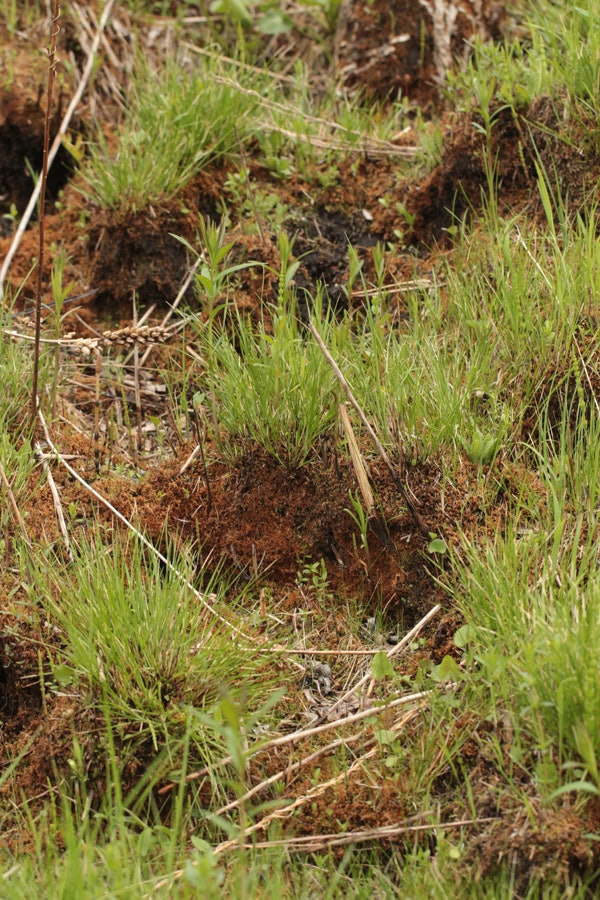 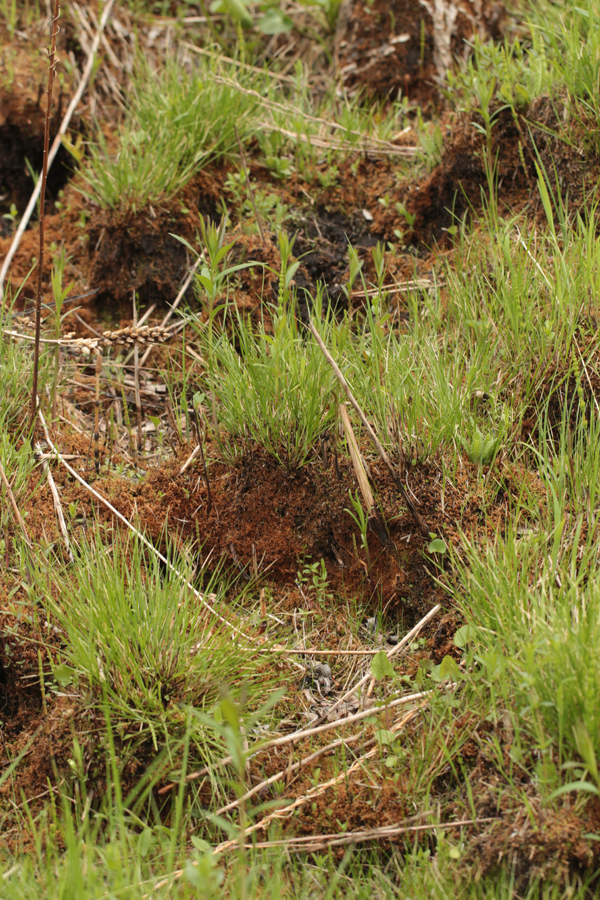 A sedge that grows in a permanent wetland and sits atop a small hummock of soil is one of only a few species. (Taken at Whiterock Conservancy, Guthrie County)

The male and female flowers may be very obvious when a sedge is in flower. Generally the stamens (pollen-bearing parts) are creamy white, while the styles (female pollen receptors) are white and inconspicuous. Immature perigynia are usually green, but some are dark burgundy or other colors. After flowering, you’ll become familiar with the female spikes and the male spikes as the male flowers dry and turn tan or brown.

Along the flowering stem, male and female spikes can be separate, usually with male spikes (one or more, depending on species) at the end and female spikes below them. Another common arrangement is for each spike to have both female and male flowers, and the female flowers may cluster either closer to the base or closer to the end of the spike, again depending on species. Each spike may or may not have its own stem, that is, spikes may stand away from the main stem, they may droop on a long stem, or they may lack stems and hug the main flower stalk.

The next three photos show sedges in bloom. The stamens (pollen-bearing parts) are creamy white on the left, while the styles (female pollen receptors) are white and smaller.

Immature perigynial scales often are green, but some are dark burgundy (as in this example) or other colors. 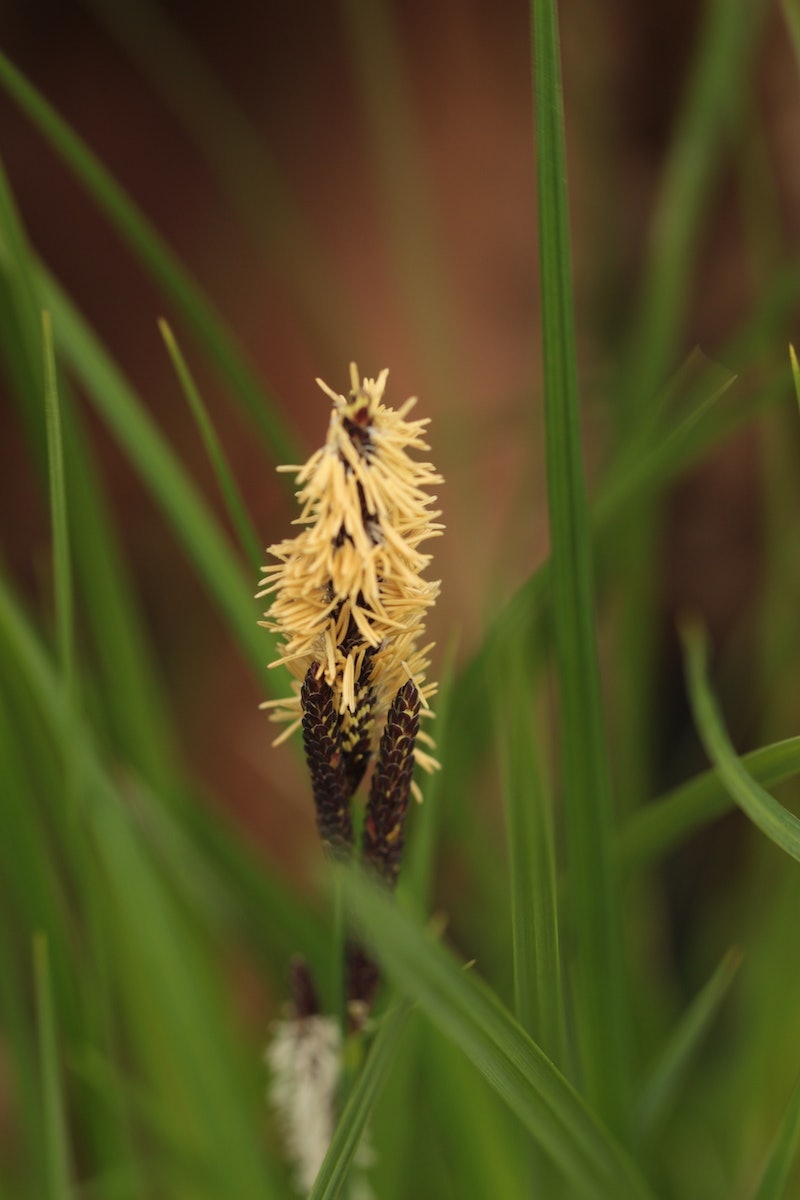 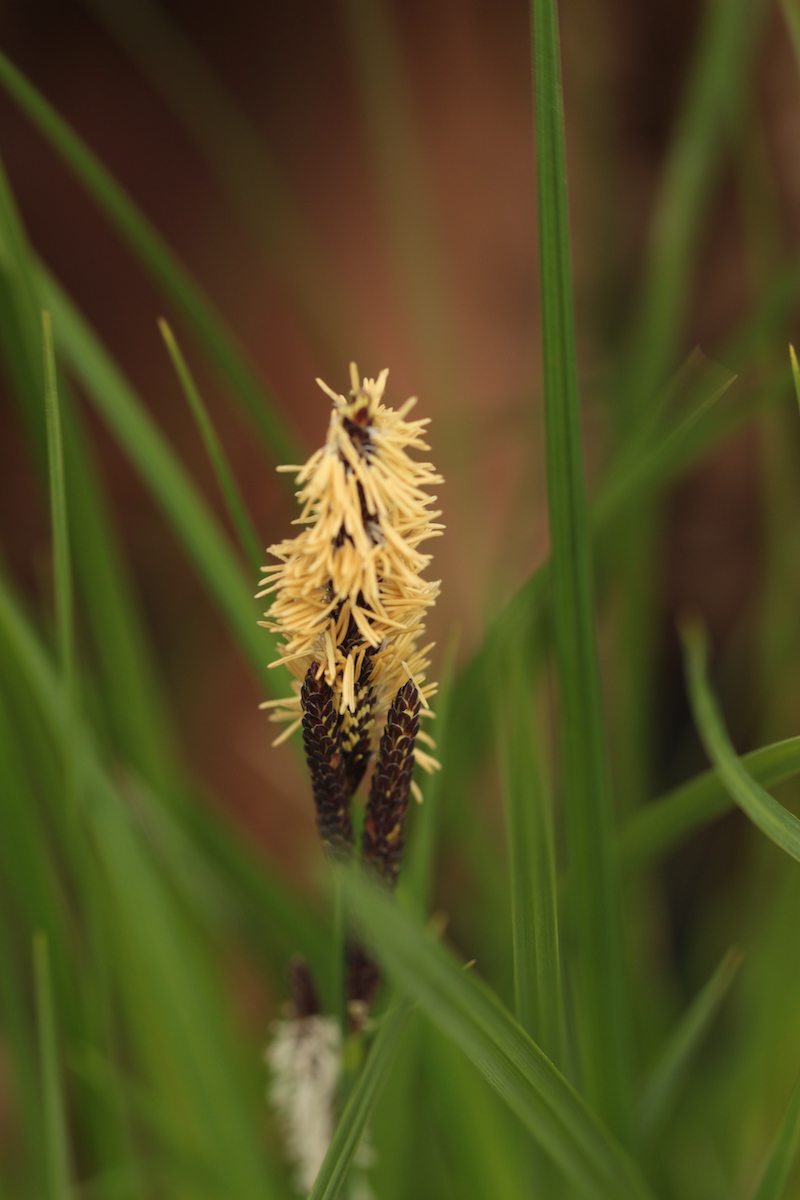 The next sedge has both male and female flowers on the same spikes. 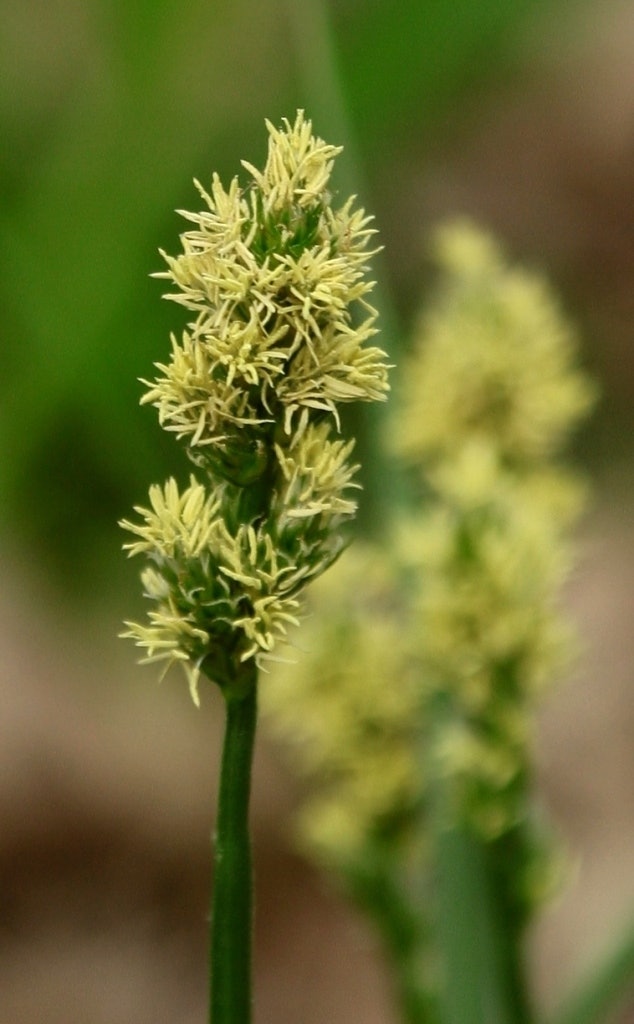 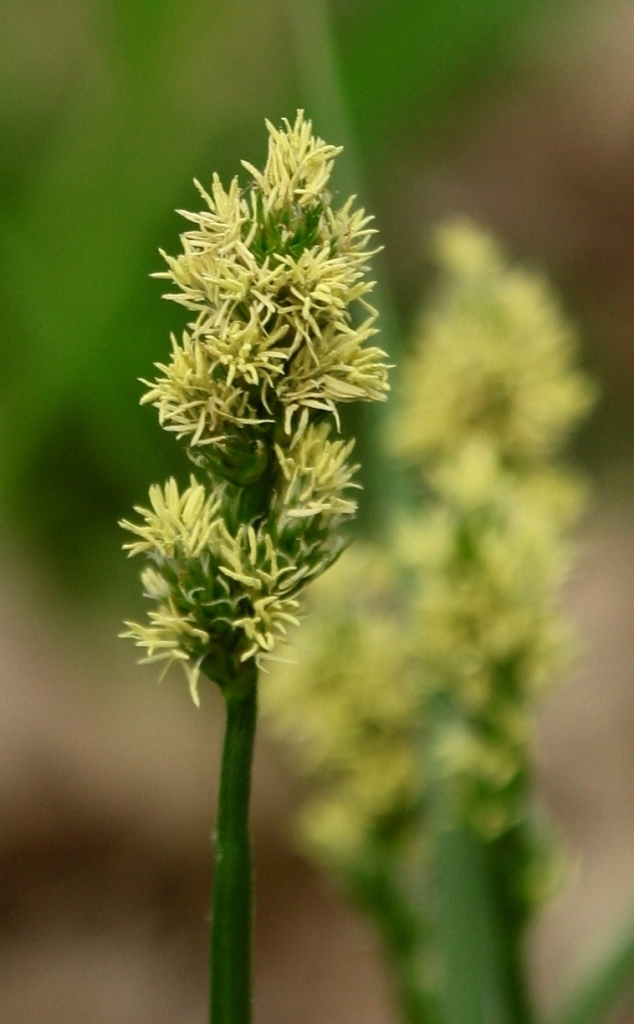 This example has a single spike of mostly female flowers. 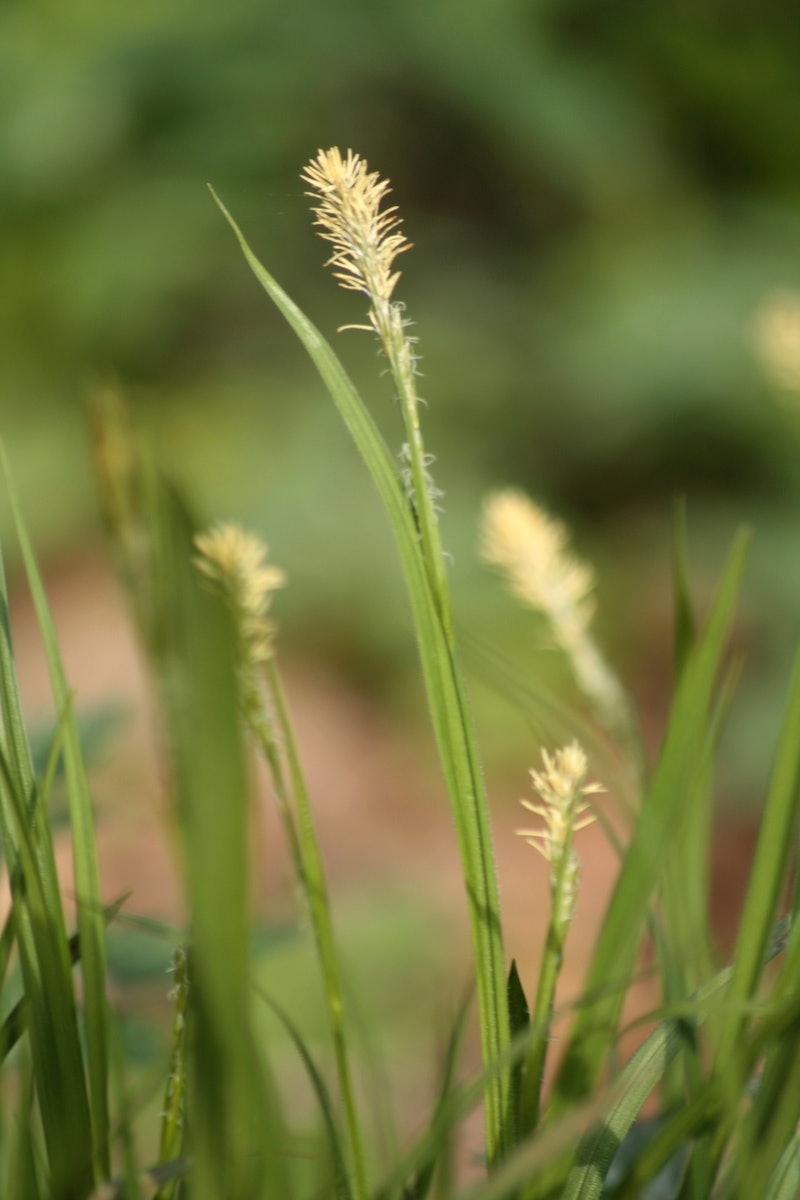 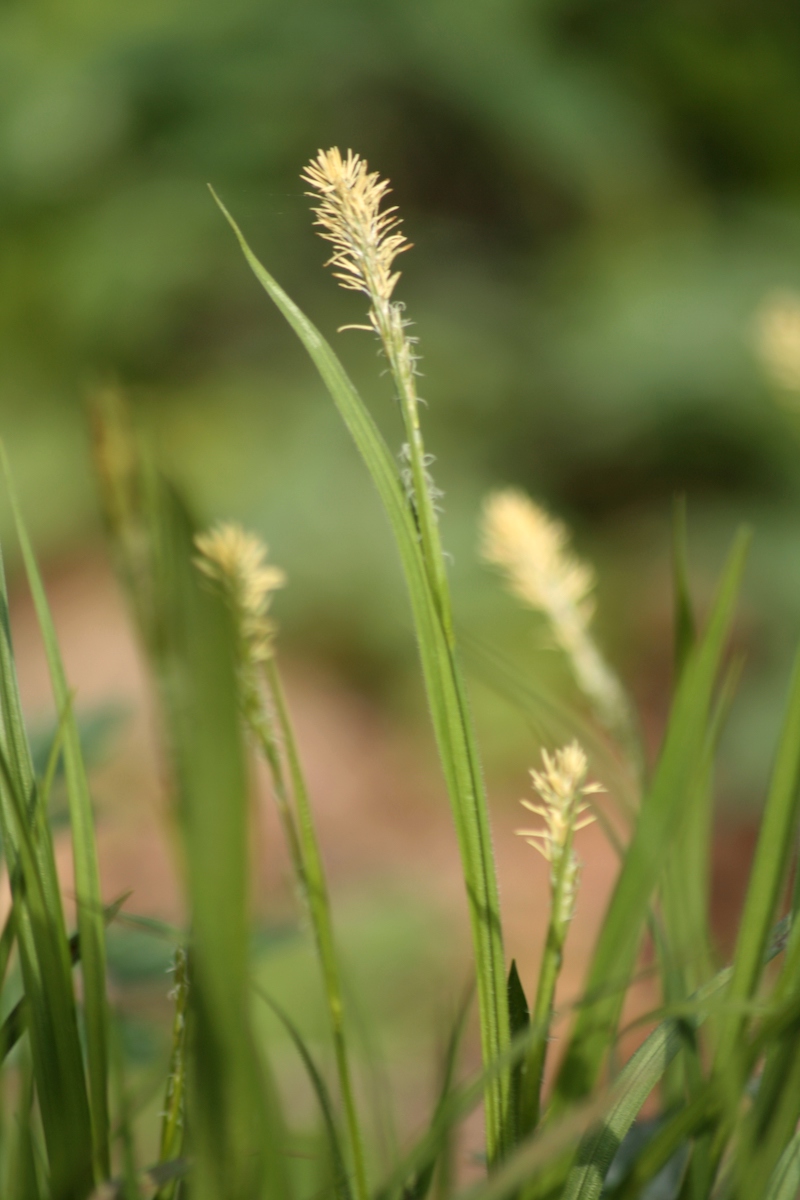 A long, thick spike of perigynia that looks bristly like a bottle brush (made of the long “beaks” on the perigynia) also is one of only a few species, and here the orientation of those beaks and the perigynial features are helpful.

Do the bristles all point toward the end of the spike as in C. vesicaria, or C. laeviconica, shown here? 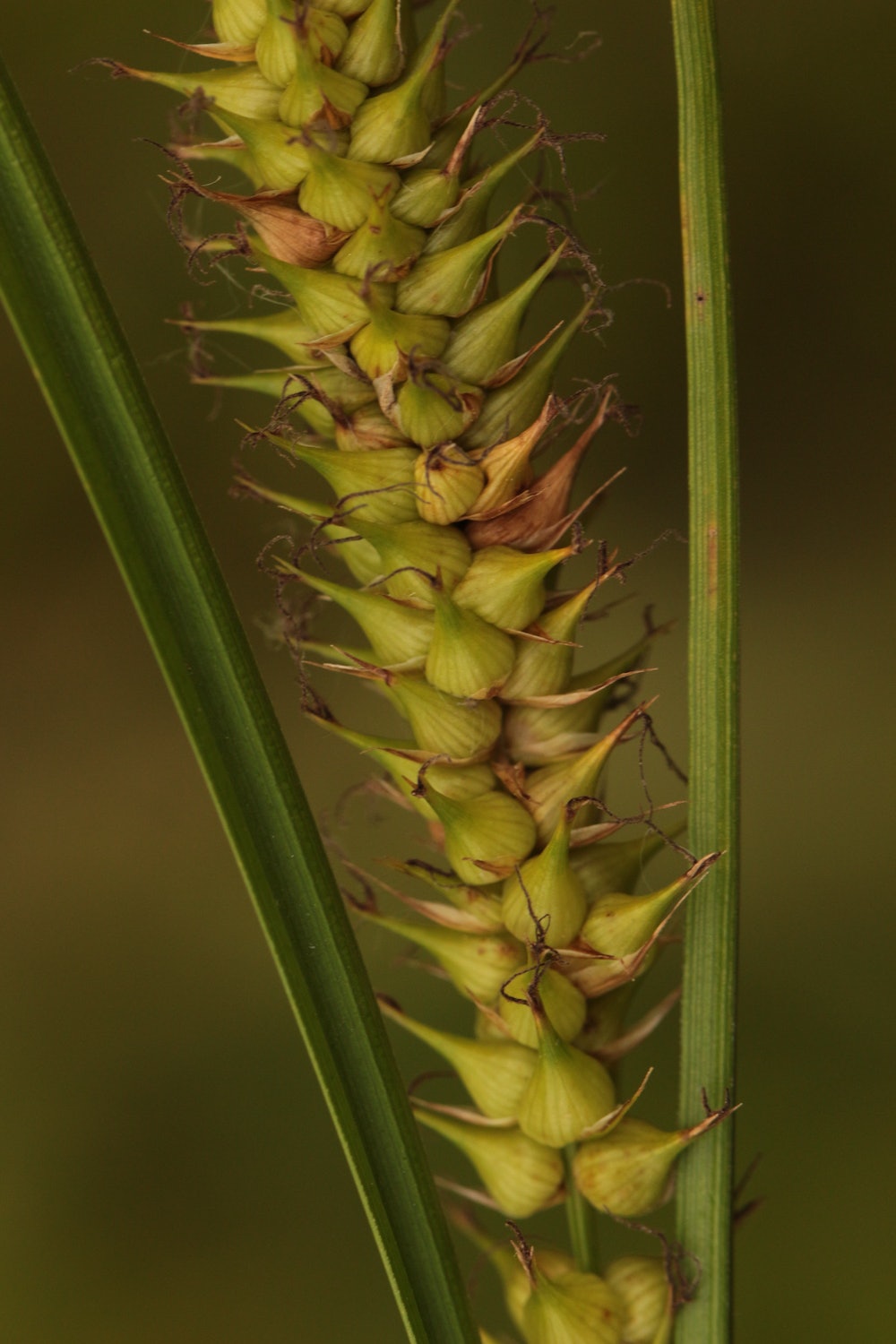 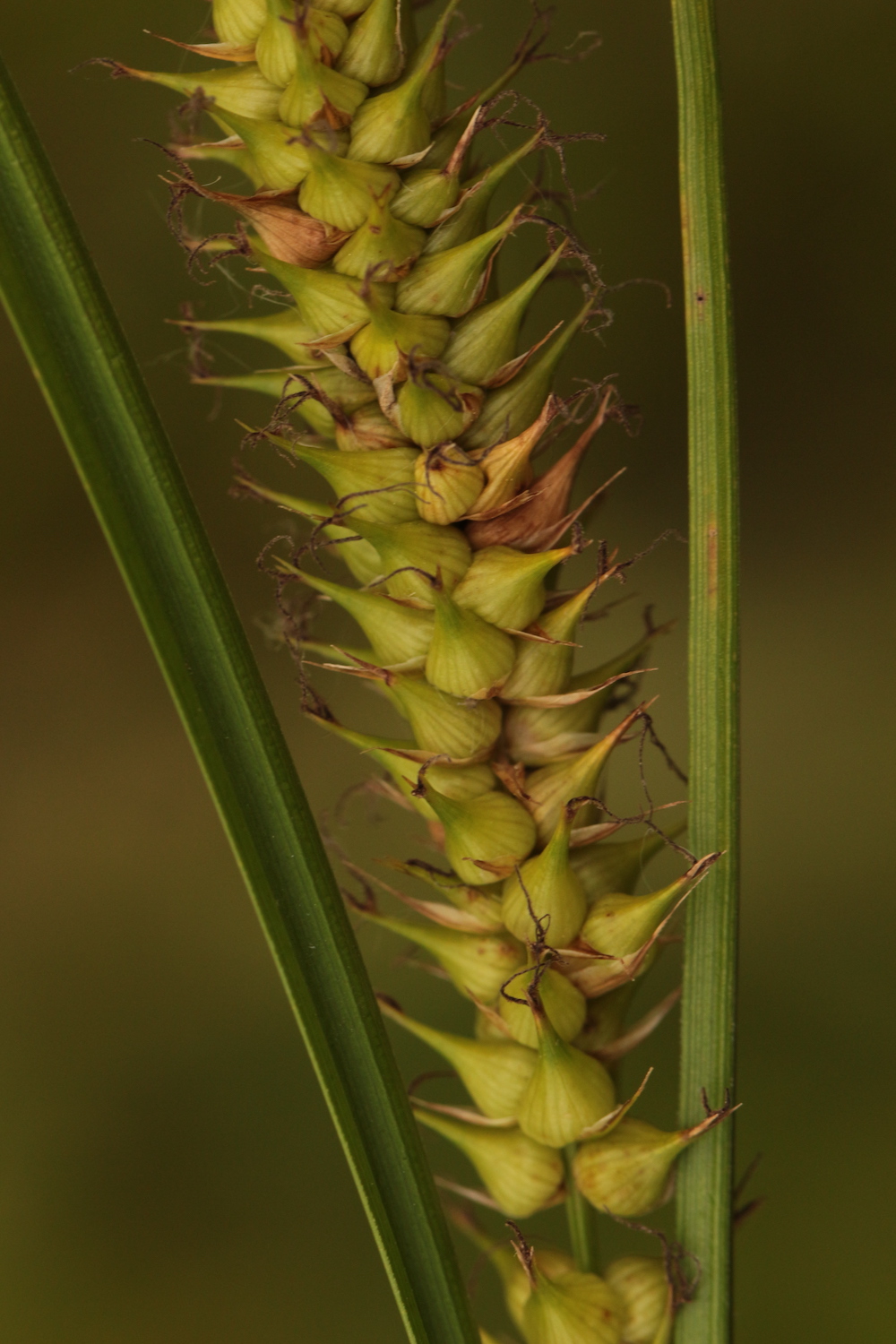 Are some bristles perpendicular to it, as is the case with C. lurida, or C. hystericina, shown here? Also notice the dry male flower spike of C. hystericina. Both species grow in water, and the perigynium is inflated with air, allowing the seed to float to a new spot and take root. 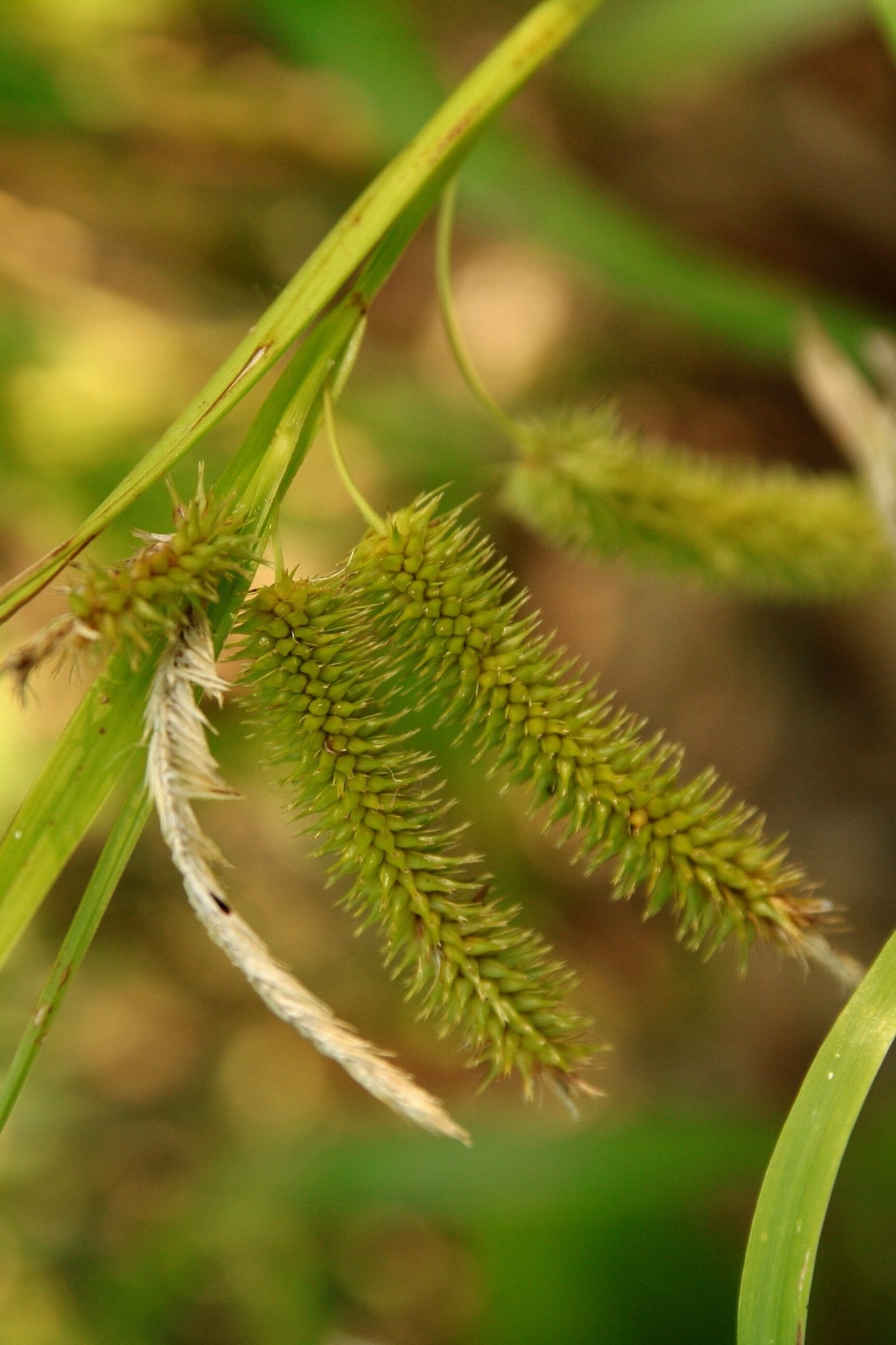 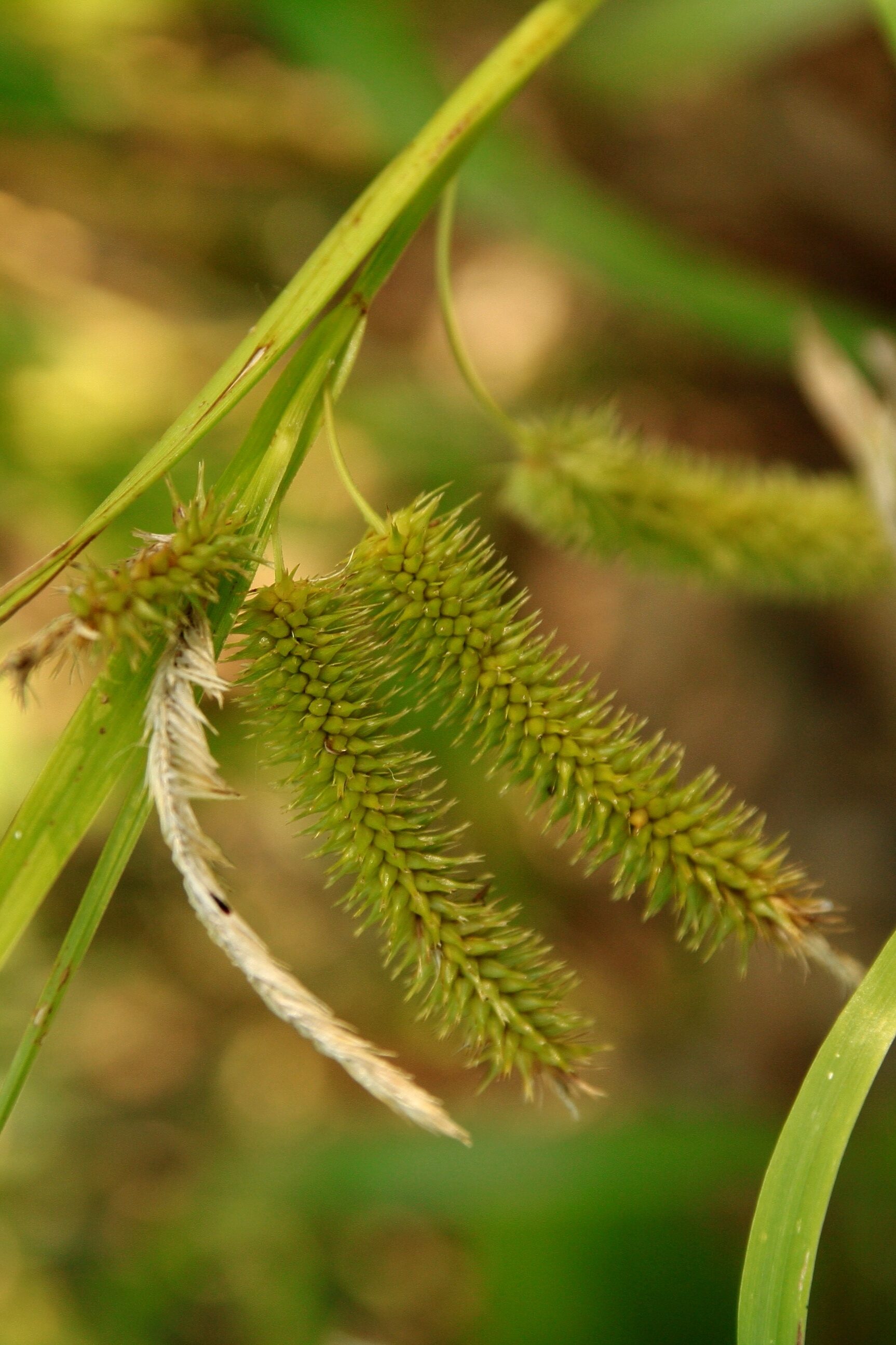 Do some actually point backwards, toward the base of the spike (C. comosa, C. retrorsa)? There also is a good chance that these sedges grow in moist to wet soils and along the edges of lakes, ponds, and wetlands.

Now for those perigynia. You will want a jeweler’s loupe, preferably with 20x magnification, although 10x usually works. A basic 20x loupe costs only a few dollars. The true seed of all sedges is inside a husk, the perigynium, that varies widely in size, shape, and other features. In most cases you need to look only at the husk, not the seed inside.

A commonly found Iowa sedge of moist prairies is C. molesta, Troublesome Sedge. This and several similar sedges have a flattened or winged perigynium, convex on one side and concave on the other, and with a swelling at the base or near the center of the flat part, in which rests the seed. At the other end, a “beak” points away from the stem and may have remnant flower parts.

C. molesta has its bump at the base, the flattened perigynium is more or less round, and the beak has two tiny “teeth” at the end. When the perigynia are mature, several raised nerves or veins are obvious with the loupe on the side that faced out in the spike. 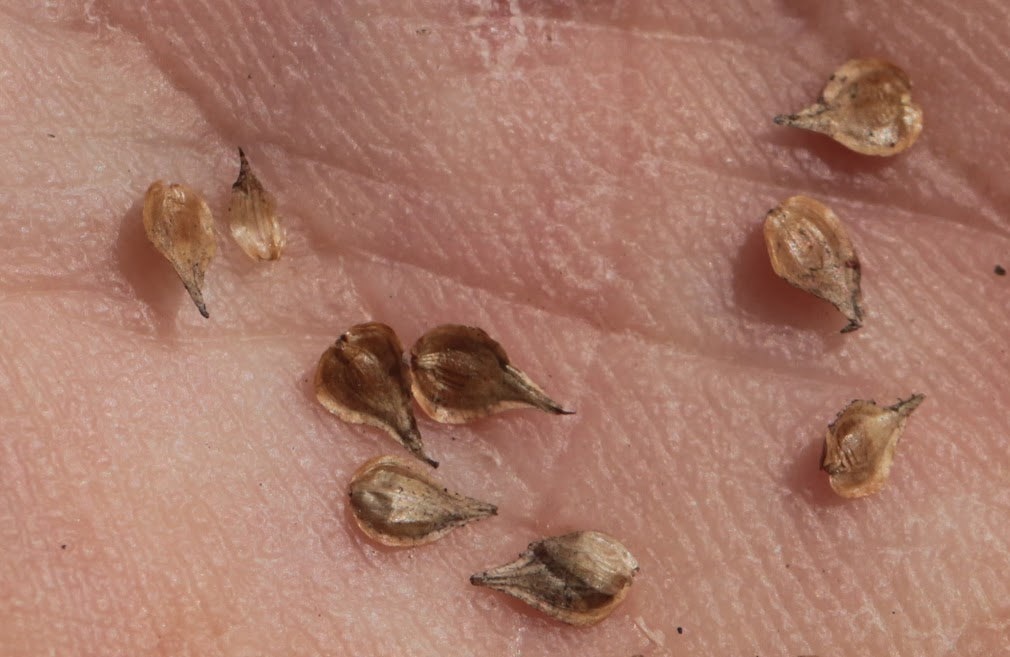 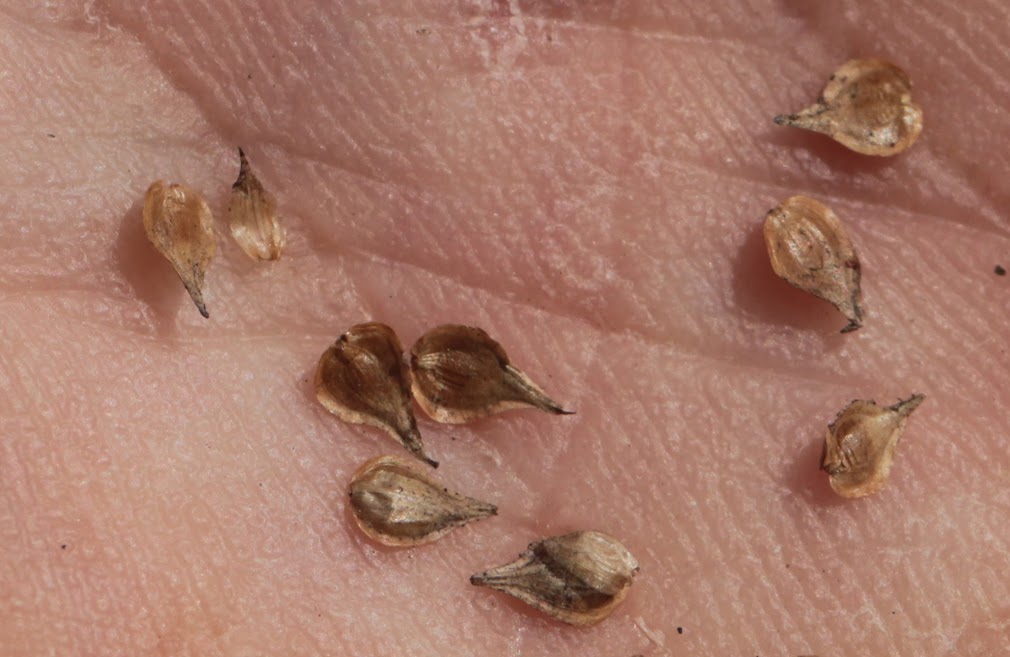 Perigynia of C. molesta, with a flattened wing, a beak, and raised nerves on both surfaces

Almost identical are the perigynia of C. brevior, also common and in similar locations. However, the bump of the seed tends to be a little above the base, the perigynia are even rounder, and the beaks are relatively shorter. Unlike those bristly bottlebrush sedges, these two have small round spikes that are without their own stems (“sessile”), and the spikes are found at and near the end of the main stem. Each spike bears both male and female flowers.

The next photos show close-ups of perigynia and female spikes of some sedges. Notice the different arrangements of perigynia, from scattered to dense, and the differences in shape and absence or presence of a beak. One spike shows a species with no beaks, whose perigynia are arranged like “grapes on a string.” This is C. grisea, a fairly common species of open, damp woods. Notice how the perigynia are widest toward the flowering end, not toward the stem. They have round cross-sections, unlike the flat or concave perigynia of C. brevior and C. molesta. The mature perigynia have a distinct gray color. 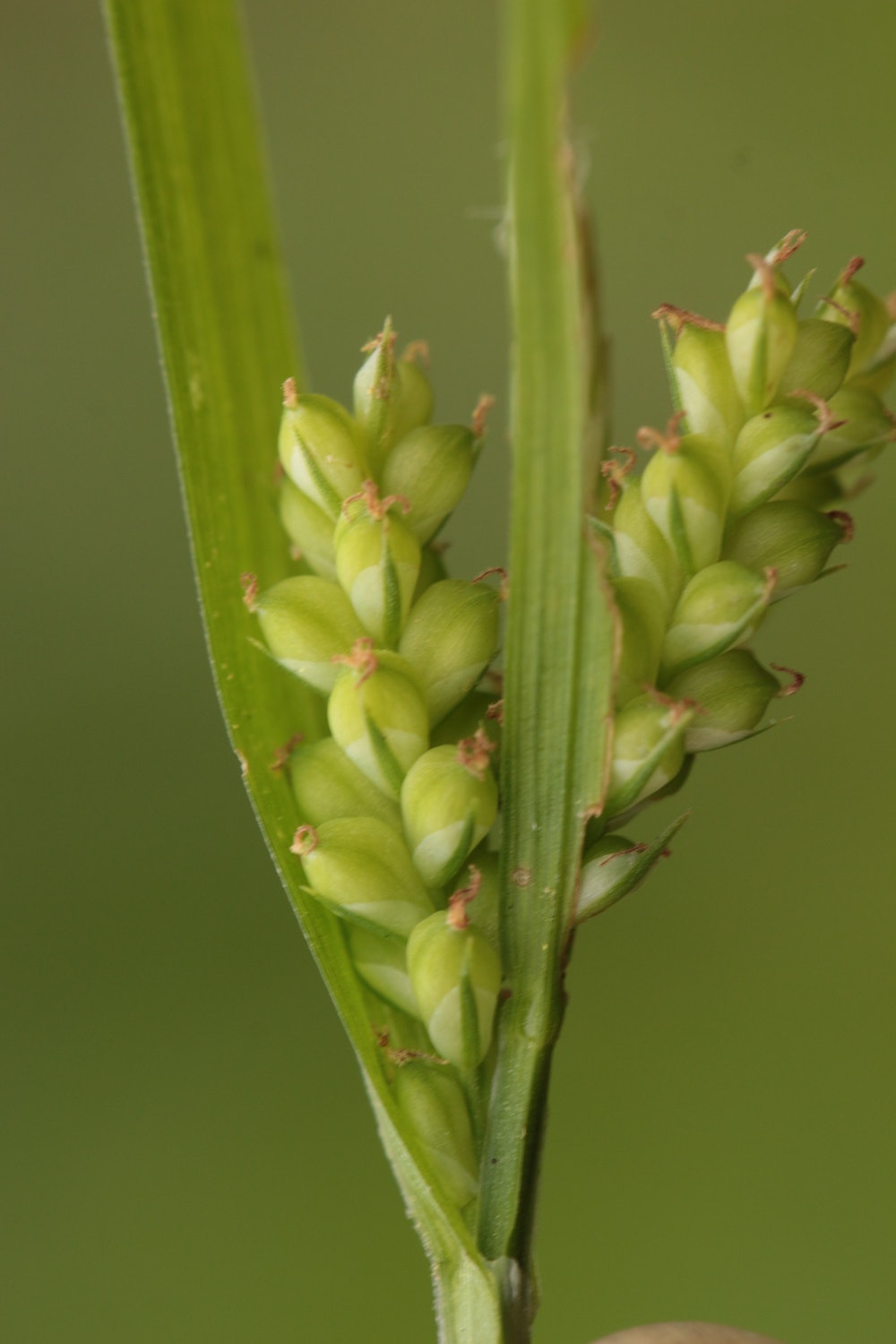 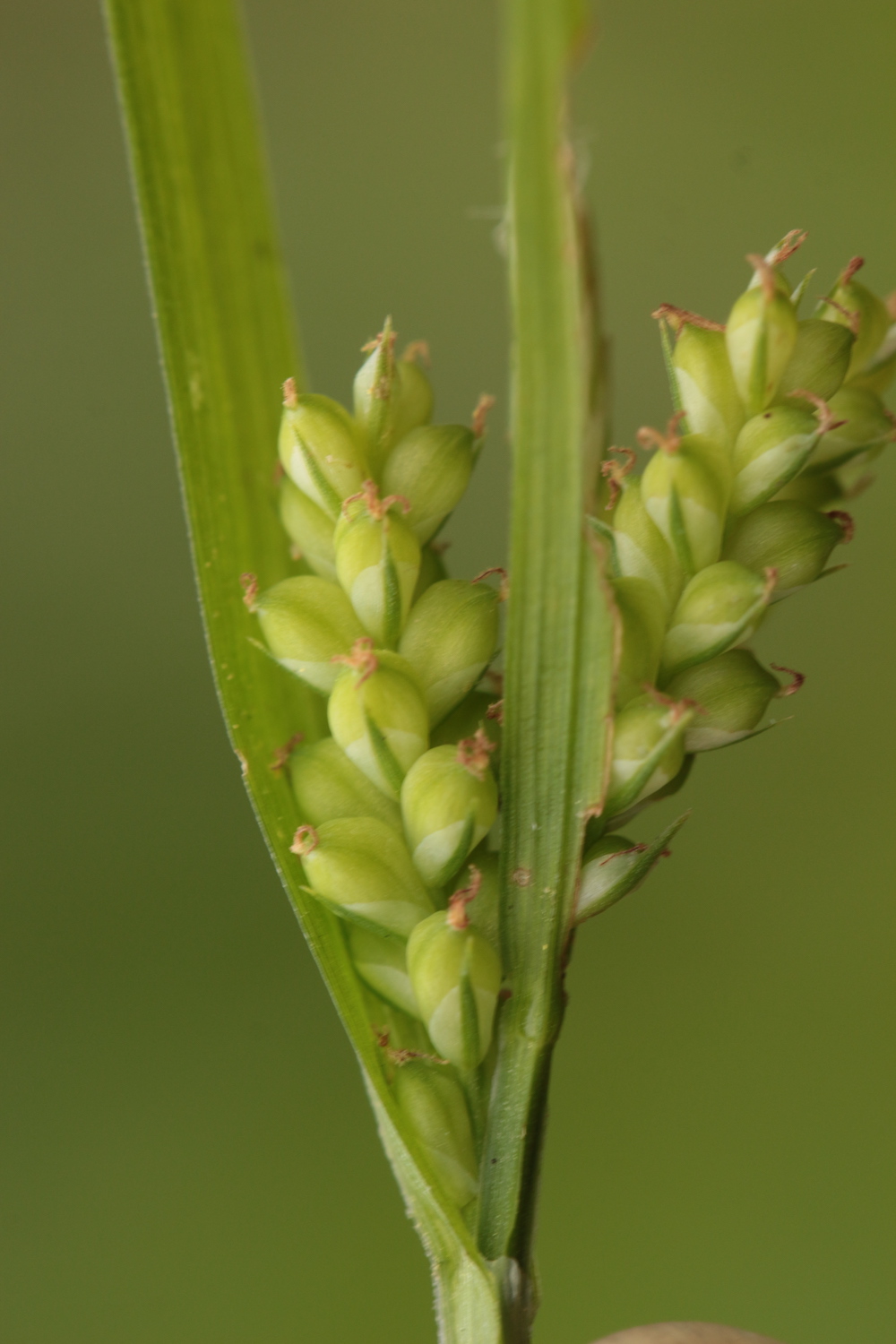 A sedge without beaks that resembles “grapes on a string” is C. grisea

A very similar species is C. oligocarpa. The very common Woodland Sedge, C. blanda, also resembles it, but the short beak of each perigynium tilts or curls somewhat like an old teaspout.

A spike of C. sprengelii or Long-Beak Sedge shows how the very long, thin beaks extend from a rounded perigynium. Also, the styles remain on the beaks. C. rosea is a delicate plant of Iowa woods; the perigynia are in scattered groups with a star-like appearance and with beaks about half as long as the body. With the loupe, the two styles are curled like the horns of a ram, a giveaway for this species. 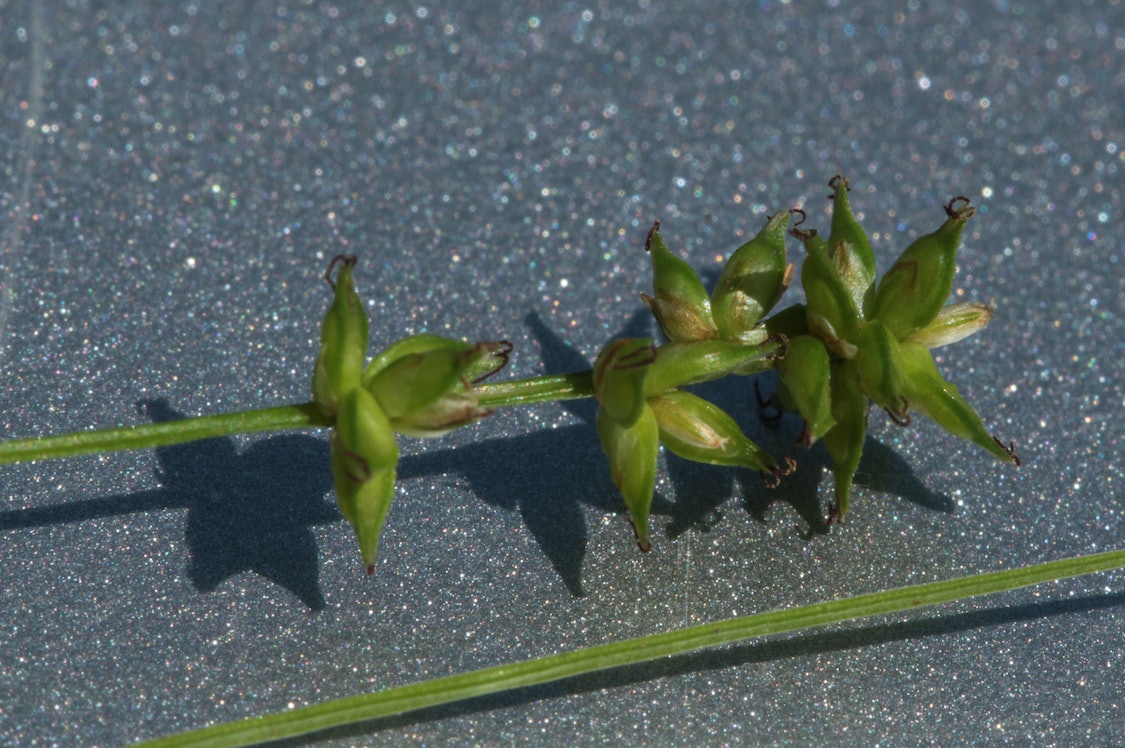 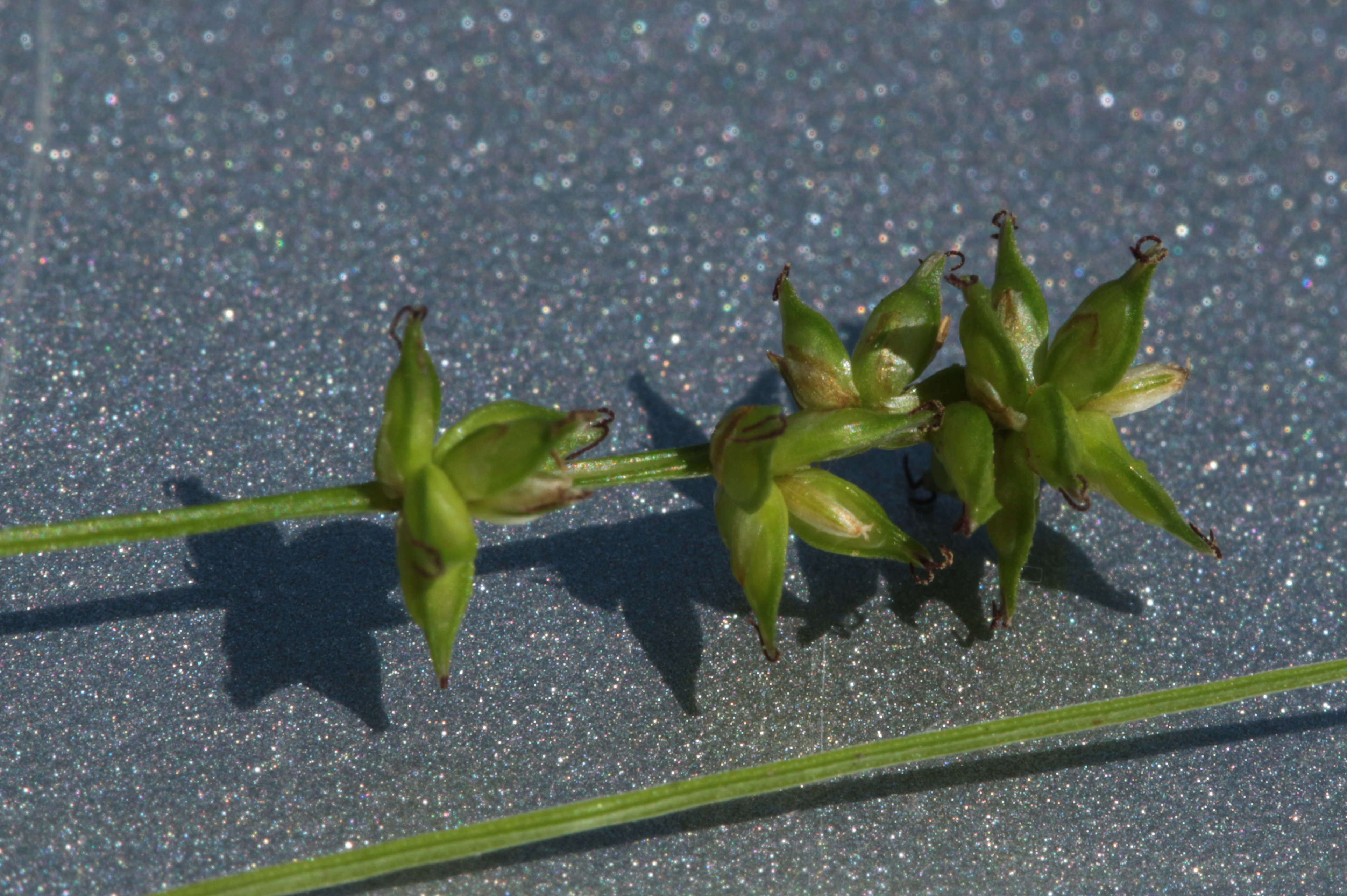 Carex rosea, with its “Ramshorn” styles and delicate seedheads. 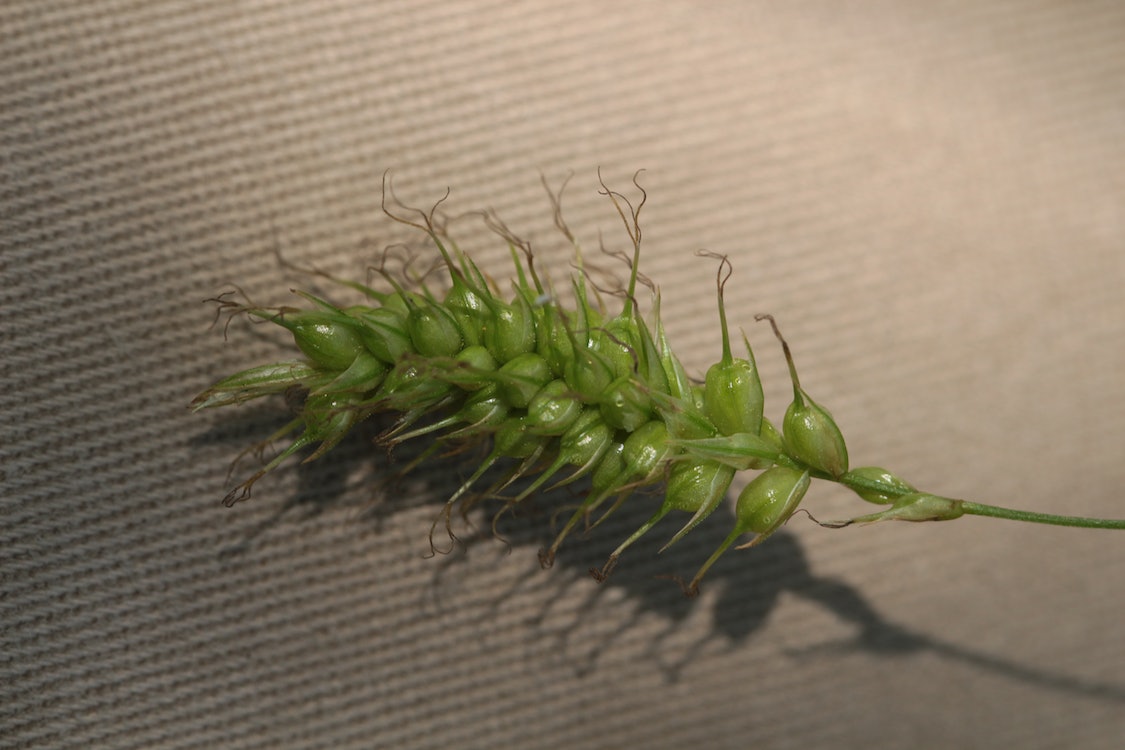 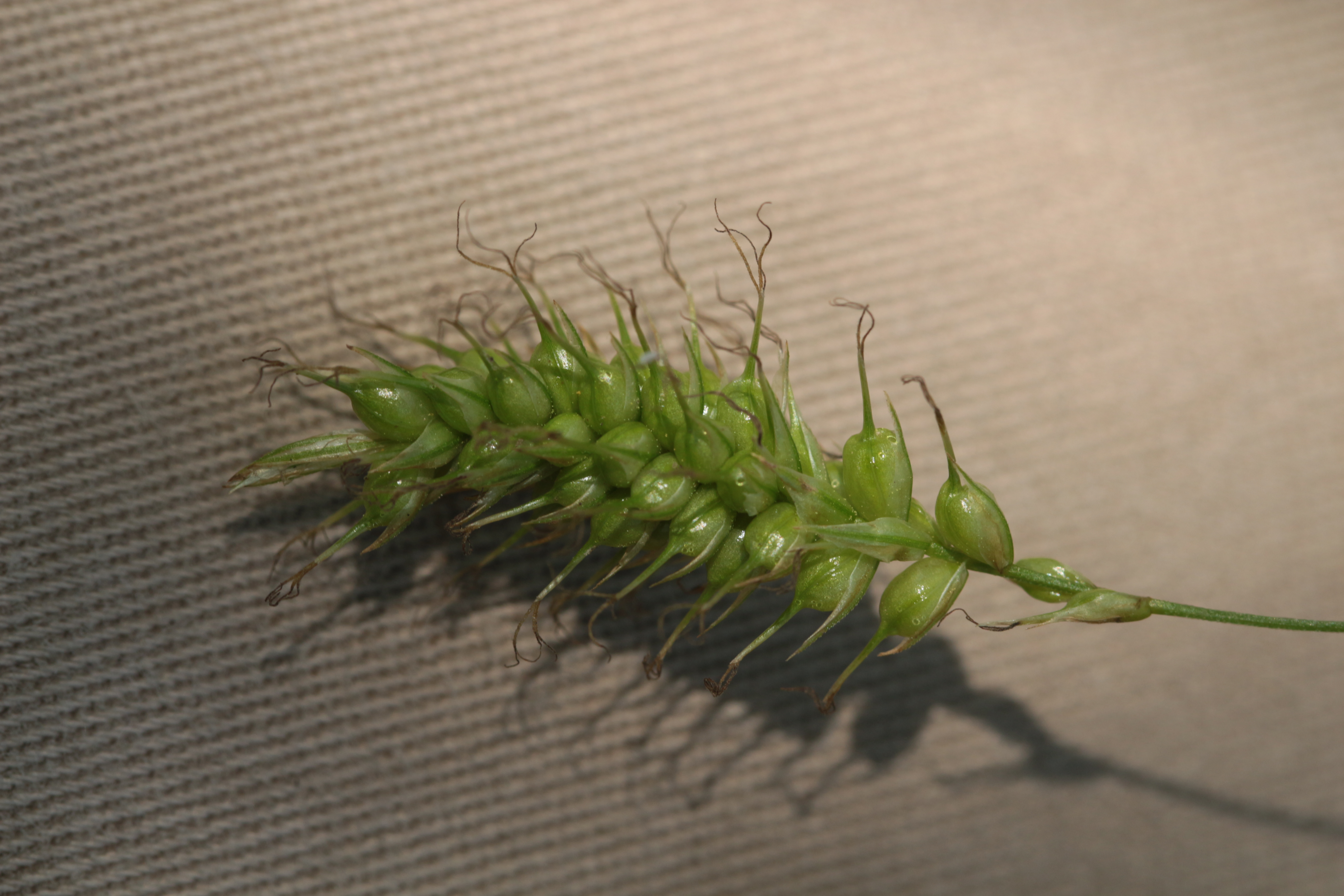 Let’s end with an easy sedge, found in wet woodlands, but not in standing water. Each stem bears only one cluster of perigynia, and these have the unusual appearance of the ancient weapon, the mace. One common name is Mace Sedge, Carex grayi. If you spot it, there really is no mistaking the round, spiky ball, an inch or more across. The perigynia are like those of wetland species, full of air and able to float. Also called Gray’s sedge, it doesn’t grow in large colonies, and it is not as common as other species, so it may be overlooked. 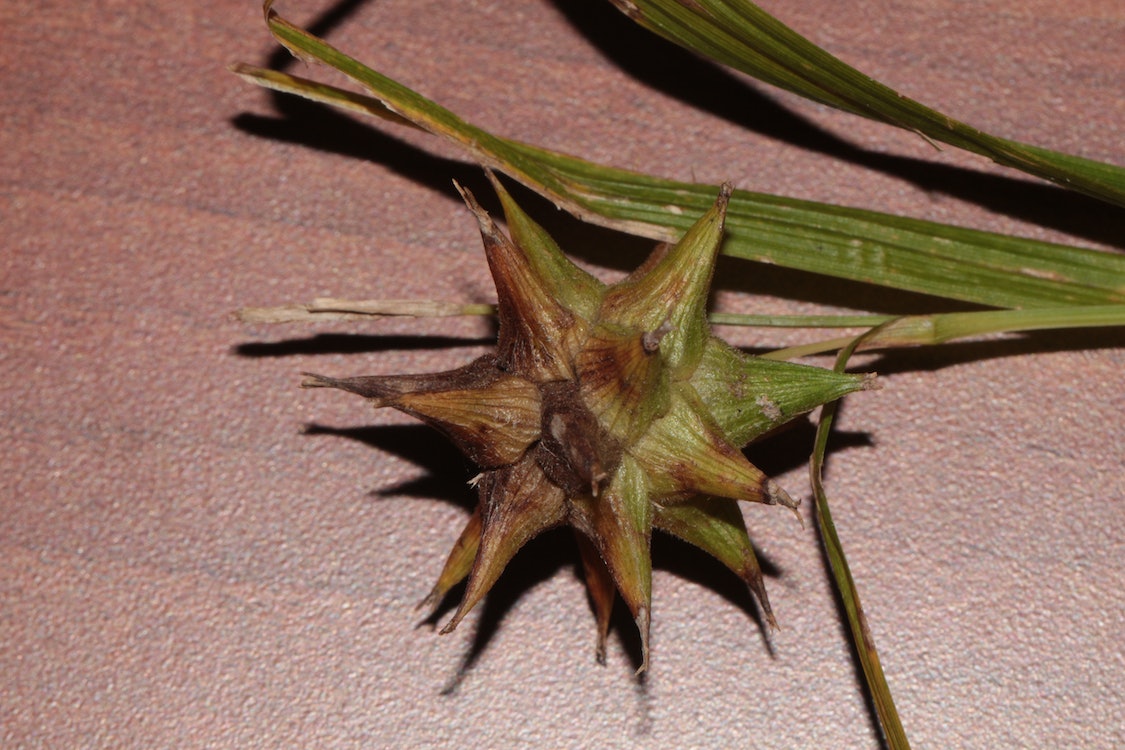 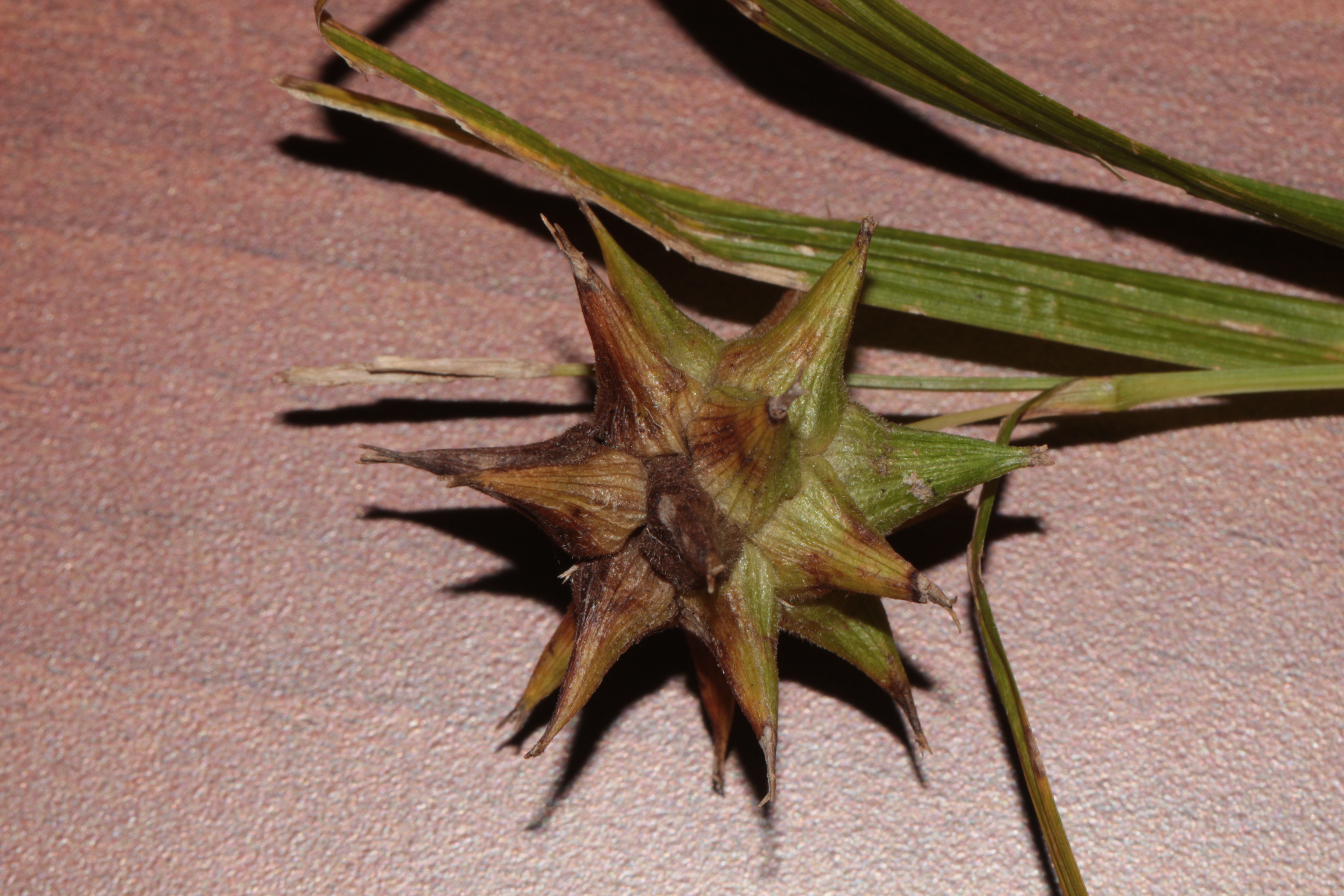 It simply stands to reason that any genus of plants that has so many species, so many different ecosystems, and is so abundant warrants attention from plant people. Let your explorations of genus Carex in Iowa begin.