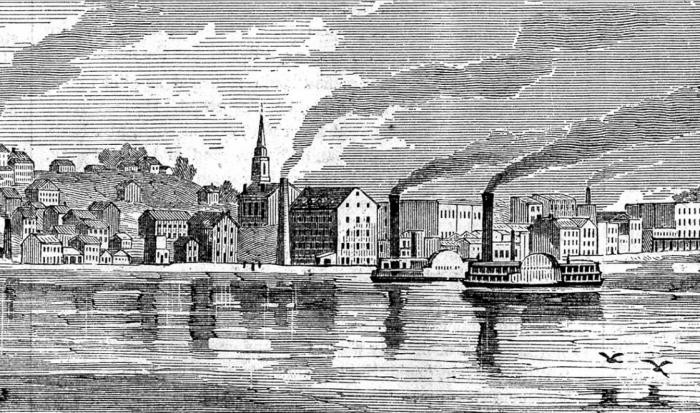 Rebecca Jane Clark was born September 15, 1849, three months after the city of Bloomington, Iowa changed its name to Muscatine. As a small child, she watched construction of a fine, brick church building at West 3rd and Chestnut streets.

Familiar as it became to her, that building was never her church. Rebecca and her family attended the African Methodist Episcopal where her father was the Sunday school superintendent, across Papoose Creek and most of the way up 7th Street hill. Their simple, rough building was also where she would attend the “African” school with her siblings and other “colored” children of the town.

From the clues available, it seems the firstborn of Alexander and Catherine was energetic and involved in the society around her. At age 4, her name is one of the 33 “Colored Citizens of Muscatine County” on a petition her father got presented to the Iowa legislature calling for repeal of the 1851 law excluding “Blacks and Mulattoes.” As she grew older, she took part in church pageants and Emancipation celebrations. More than her younger sister and brother, she experienced firsthand how it was to grow up Black in pre-Civil War, frontier Iowa.

The pastor of the church kitty-corner from her house had arrived in Bloomington in 1843 as a young missionary and would hold the same pulpit for a half century. He would become a friend of the Clarks and would even officiate at Rebecca’s wedding. From the Linn County Register, November 1853:

[Muscatine] is pretty well supplied with churches (ten in number), though at present rather destitute of pastors. Decidedly the best appearing, exteriorly, of these, is the Congregational. This building is not completed above, but probably will be during next summer. When done it will have one of the finest, though not, perhaps, the largest audience rooms in the city.

At present the congregation worship in the basement. The Rev. A.B. Robbins is, and has been for some ten years, pastor of this church. Though not a brilliant pulpit speaker, he is a sound, sensible, evangelical preacher, whose discourses are always listened to with interest by his audience.

Historian Robert Dykstra: “In that year of 1843 the winds of religious schism swept America. Evangelical abolitionists throughout the North sought to incite their various denominations to declare slavery a heinous sin, to excommunicate slaveholders, and to endorse antislavery activism as a Christian endeavor.”

Alden B. Robbins and ten of his classmates from Andover Theological Seminary in Massachusetts heard a call from God to bring Christian civilization out to the Iowa Territory. I recommend learning about the “Iowa Band” and their influence on the course of the new state. Launching the institution we know as Grinnell College was one of their achievements.

On Thursday, May 28, 1861, he had said at prayer meeting: "The thing to be prayed for now is Emancipation"; and on Sunday, September 7th, he had noted: "Preached in favor of emancipation of slaves. Full house - some excitement." His joy, therefore, when, on January 3, 1863, he heard of the Proclamation of Emancipation was profound. "Glorious dawn of hope for the country!" he exclaims, "more than three million people set at liberty!"

At a party celebrating his 20th year in ministry, the Muscatine Journal reported on November 2, 1863, Pastor Robbins reminisced: “Another interesting name given us was the ‘d—d Yankee Church;’ and, still later, the name of ‘Uncle Tom’s Cabin.’ All of these have been names of honor, and all of them have already come to be anything but a disgrace.”

There was quite a sensation among our colored population, last evening, the occasion being the marriage of George W. Appleton to Rebecca J. Clark, eldest daughter of our well-known citizen, Alexander Clark. The wedding took place in the African Church at 6 o’clock, the ceremony being performed by Rev. A.B. Robbins, the Congregational pastor. The young couple have many friends among our citizens. The bride was born in Muscatine and has been liberally educated. The bridegroom came from the South during the war, having been born a slave; but by eight years close application to business and improving leisure hours by study, has established a character for uprightness and intelligence which is worth more than riches or an academic education without such character.

Rising 70 feet above the ground, the spire of the Congregational Church beckoned to eastern pilgrims from out of a panoramic drawing, published in 1855 in Ballou’s Pictorial, a Boston weekly, showing Muscatine viewed from the Mississippi River.

Today the site of the 1852 church is a sunken parking lot. The site of the Clarks’ home is the garage for the Clark House apartments. The 1848 bell the Congregationalists brought from Massachusetts is at Faith United Church of Christ on Mulberry Avenue.

Next time: Rebecca the pioneer