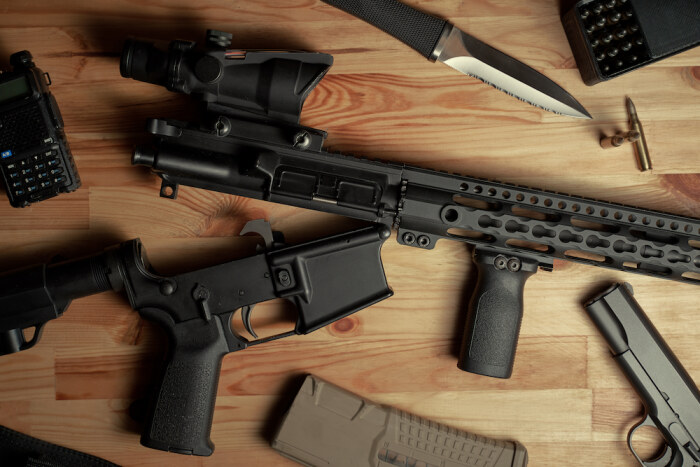 Bruce Lear: The constitutional amendment Iowans will vote on in November goes much further than the Second Amendment to the U.S. Constitution.

Tombstone came out in 1993, but it’s still a good watch even for the fifth time. It’s also relevant now, because the U.S. Supreme Court recently expanded gun rights, and this November, Iowans will be asked to enshrine guns into our state's constitution.

There’s a scene in the movie where the Earp brothers as marshals of Tombstone post a sign requiring guns be surrendered before entering town. One cowboy won’t comply, so Virgil clubs him with the butt of his gun and takes the firearm from a bleeding, unconscious cowboy.

In 1881, even though Tombstone was part of a somewhat lawless west, the Earp brothers understood something six present-day Supreme Court justices don’t. They understood that adding unlimited guns to a crowded, volatile, town would make it even wilder and more dangerous. That’s exactly what could happen to New York City now because of the Court’s ruling saying there needs to be no compelling reason for carrying a firearm.

I’ve noticed that hard-right gun lovers never seem to quote the whole Second Amendment when they are busy celebrating its glory. They leave out the first part, which reads: “A well-regulated Militia, being necessary to the security of a free state…”

Obviously, the founders were concerned that citizens needed to be armed if another country invaded, and if a militia needed to be formed. The fledgling Republic didn’t have the finances to buy ammunition and muskets for the militia to defend the country.  But that’s not true now.

A well-regulated Militia means government oversight, discipline, and organization. Now, there is a belief that gun ownership requires no discipline, few rules, and is somehow divinely ordained. It isn’t.

Let’s clear something up. No one is coming to take guns away. There may be black helicopters, but they are busy flying rich guys like Elon Musk around to avoid paying taxes.

Every time there is a slaughter of innocents at a school, church, mall, or any public place, some voices on the right warn that the government is coming for your guns. It’s a grift to spur people to donate to gun groups and buy more at the local firearms dealer.

So, the proposed constitutional amendment Iowans will vote on in November goes much further than the Second Amendment to the U.S. Constitution. Here is the proposed wording:

The right of the people to keep and bear arms shall not be infringed. The sovereign state of Iowa affirms and recognizes this right to be a fundamental right. Any and all restrictions of this right shall be the subject to strict scrutiny.

When the legislature debated this amendment, Democrats proposed copying the U.S. Constitution's language instead. Republicans refused. They want language that goes way beyond the Second Amendment. They are like the old guys who wear suspenders and a belt. They don’t trust one, even though one is enough.

Note the last sentence: “Any and all restrictions shall be the subject of strict scrutiny.” That is the highest level of scrutiny a court can use in determining whether a law or regulation is constitutional. This language would make it nearly impossible for future legislatures to enact common-sense gun restrictions, even if gun violence becomes much worse.

Specifically, because of the last sentence of the proposed amendment, any reasonable restriction like keeping felons and domestic abusers from owning guns, keeping guns out of schools, red flag, safe storage laws, and universal background checks would lead to expensive and lengthy litigation.

Only three states—Louisiana, Alabama, and Missouri—have passed a similar amendment. Those states are now third, fourth, and fifth in the country for gun violence.

I understand loving guns. As an emerging teen, I was a gun lover. I subscribed to Guns and Ammo. When we’d go shopping, I’d sneak off to ogle guns.

I was gun smitten. But my dad did his hunting with a fishing pole and a Hula Popper. My Mom was non-violent except towards the snakes living by the clothesline.

I finally did get a 20-gauge as a Christmas gift, and I cherished it. Although I was never a good shot, I loved shooting and hunting. In fact, I once shot at the broad side of a barn and missed, putting an innocent cow at risk.

I loved that gun until the need for $40 to buy groceries my first-year teaching overrode my need to hunt. I sold the gun.

We shouldn’t tie the hands of future legislators with an amendment that’s not needed. The Second Amendment protects gun rights, we don’t need to enhance those further in Iowa's constitution.

Let’s keep Iowa as safe as possible. We don't need ban all guns like Tombstone, but let’s make sure we have a chance to pass common-sense gun laws now and in the future.