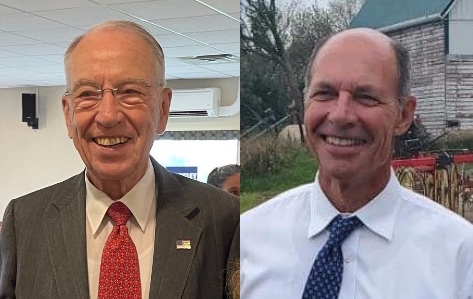 Dan Guild is a lawyer and project manager who lives in New Hampshire. In addition to writing for Bleeding Heartland, he has written for CNN and Sabato's Crystal Ball. He also contributed to the Washington Post’s 2020 primary simulations. Follow him on Twitter @dcg1114.

Asking if Senator Chuck Grassley could lose seems absurd. He has received more than 60 percent of the vote every time he has been up for re-election, beginning in 1986. He represents the opposition party at a time when President Joe Biden's approval rating is below 40 percent.

The Des Moines Register has not released Biden's approval numbers for their latest Iowa Poll by Selzer & Co, but in March they found Biden's approval in Iowa was 35 percent, with 59 percent of respondents disapproving. Given the national trends, it is unlikely that the president's numbers have improved in Iowa since then. Moreover, Republicans have made big gains in Iowa since President Barack Obama carried the state in 2012.

An incumbent who has not been seriously challenged in more than 40 years, running in a state that is moving toward Republicans, at a time when the Democratic president is unpopular, should not be in any danger. And yet, according to the most recent Des Moines Register Poll:

Grassley probably will win re-election. As pollster Ann Selzer notes in the article by Stephen Gruber-Miller, an 8-point lead is a sizable lead.

The Des Moines Register's poll found that Grassley and Franken have both consolidated support among their partisan bases.

Given all of the above, how could Franken win? I can think of two ways:

First, turn the election into a referendum on the status quo. According to Polling Report, the number of Americans who think the country is on the wrong track in Gallup polling is near a record. This will not be easy - when the country is unhappy usually the party in power is held accountable. But Grassley's age and length of service may make him vulnerable. (Selzer's poll from June 2021 indicated that 64 percent of Iowa voters thought "it's time for someone else" to hold the Senate seat.)

Second, Franken needs to use the U.S. Supreme Court's Dobbs decision to win the suburbs. Trump narrowly carried the Iowa suburbs in 2020; in the latest Iowa Poll, suburban respondents slightly prefer Franken by 43 percent to 41 percent. (The Register has not yet published new findings on abortion but may have asked that question; if so, this post will be updated as needed.)

Much of the analysis about the midterm elections has focused on Biden's unpopularity, with good reason. But America in 2022 is an unhappy place. Inflation has not receded as it should, and people are losing ground. The Dobbs decision has thrust the country into an abortion debate that many did not want. The Fourth of July was marred by yet another mass shooting, and there is little sign that mass shootings will end.

The status quo is unpopular. The challenge for Democrats is to explain how they can represent popular change. If Franken can do that, this election will be closer than anyone thought possible a year ago.