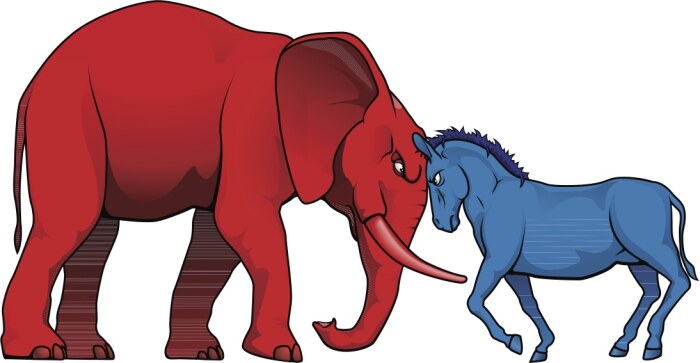 Meddling in primaries is risky and wrong

Bruce Lear: No political party should gamble our democracy because it wants to face the weakest opponent in a general election.

I’ve heard from police officers that intervening in domestic disputes is very dangerous. Often those fighting unite and turn on the officer.

Now, some Democratic interest groups are intervening in the Republican party’s family fight, its primary. The goal is to boost Republican candidates that Democrats judge to be too extreme to win a general election.

That boost comes in two ways. One approach is to amplify the “extreme candidate,” and the other is to run negative ads about his/her more “moderate opponents.”

This strategy drips with irony. The same interest groups shouting, “democracy is on the ballot,” are using money to help candidates like Republican Joey Gilbert, running for governor in Nevada, who told the Nevada Current he had “not a single regret,” about being in Washington during the Capitol riot. He also doesn’t accept Donald Trump lost in 2020.

But Gilbert isn’t alone. Democratic-aligned groups are also indirectly helping Ron Hanks, a U.S. Senate candidate in Colorado who described January 6 as "a peaceful rally," and Darren Bailey, a GOP candidate for Illinois governor. Bailey said in December 2020 that it was “appalling" GOP leaders in Illinois wanted Trump to concede the election.

These are just three examples. There are others, such as a Democratic Congressional Campaign Committee ad calling a far-right GOP candidate "too conservative," which will likely help that candidate defeat a more moderate U.S. House incumbent.

I’m reminded of my mom’s admonition, “Be careful what you wish for. It may not be what you imagined.”

Both parties have used this meddling strategy before. Republican media and interest groups tried to promote candidate Bernie Sanders in the 2020 Democratic primary because they believed Sanders, a democratic socialist, would be easier to beat than the eventual winner Joe Biden.

In 2012, Claire McCaskill of Missouri, the Democratic candidate for Senate, spent more money in the last two weeks of the Republican primary helping Todd Akin than he spent on his entire primary campaign.

She explained to NPR radio that she helped Akin in the primary, because he was the “weirdest" of the three GOP candidates and "he might say some weird things if he were nominated." He did, famously telling an interviewer that it was "really rare" for a woman to become pregnant after rape, because "If it’s a legitimate rape, the female body has ways to try to shut that whole thing down.” McCaskill won her re-election bid by more than a 15-point margin.

I oppose this strategy for four reasons.

First, I believe voters in a primary have a right to choose their representative in a general election without interference from the other party, or even from their own parties’ national leaders.

Many voters in Iowa in 2020 weren’t happy when national party leaders put their thumbs on the scale for Theresa Greenfield in the Democratic Senate primary. They believed Iowa Democratic voters should independently pick the best candidate, not party insiders.

Having the other party wade into a primary won’t pass the smell test for most voters and volunteer activists.

Second, the voting public is far more polarized than it was in 2012 or even 2020. That makes meddling in a primary more dangerous now than in the past. The candidate Democrats pick as “extreme,” may seem quite mainstream to Republicans and independents voting in November.

Third, Democrats need to spend their time honing a winning, populist message that appeals in to general election voters. The campaign that offers real solutions for the future is always better off than campaigns that dwell on grievances of the past.

Finally, I’m certainly not opposed to honest, negative campaigning about what an opponent said or did, but an interest group using large amounts of money to boost a candidate it opposes is tricking its own donor base. It’s just wrong.

No political party should gamble our democracy because it wants to face the weakest opponent in a general election. That’s not how our system of government works.