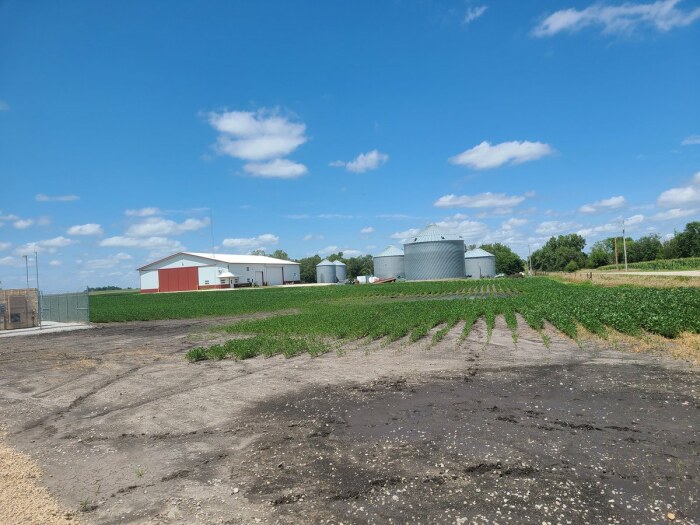 A science-based case against carbon dioxide pipelines across Iowa

Seventeen academics, farmland owners, and environmental advocates have urged the Iowa Utilities Board to reject permit applications for a carbon dioxide pipeline that would run across Iowa. A July 29 letter to the board laid out four science-based objections to the projects proposed by Summit Carbon Solutions, Navigator CO2 Ventures, and Archer Daniels Midland partnered with Wolf Carbon Solutions.

Matt Liebman, Iowa State University professor emeritus of agronomy, took the lead in writing the document. Citing "relevant scientific and engineering studies," the letter explained how the pipelines would damage soil and crop yields without significantly reducing greenhouse gas emissions. Allowing the use of eminent domain for this project would be "a betrayal of public trust and a corruption of the ideal of private sacrifice for public good," the letter argued.

Those who wrote to the Iowa Utilities Board include six retired professors from Iowa colleges or universities and several Iowans with professional conservation experience at the federal or county level. I also signed, having been an environmental advocate for the past 20 years. I did not draft the letter or make editorial changes to it.

You can download the letter here or read it in full:

Five Iowa State University scientists collaborated on a study published in the peer-reviewed journal Soil Use and Management, which examined crop yields in areas affected by underground oil pipeline construction. They found that the soil compaction reduced corn yields by 15 percent and soybean yields by 25 percent.

The letter to the utilities board noted that farmers are aware of the impacts on agricultural production and "consequently are reluctant to allow degradation of their land by pipeline construction."

Emma Schmit, an Iowa organizer for the nonprofit Food & Water Watch, recently shared these photos of corn harvested last year from an undamaged field (on the left), and from a field the Dakota Access pipeline went through.

This is corn from 2021. One was harvested from an undamaged field, the other comes from land #DAPL went through. This is what farmers can expect from the 3 CO2 pipelines proposed for Iowa. pic.twitter.com/eFhp7EvmC2

Schmit further explained that in addition to soil compaction from the construction equipment, pipelines can prevent rainwater from being absorbed by the soil.

Yes. Compaction (and mixing top soil with clay) makes it much more difficult on the corn to grow healthy roots. It also stops rainwater from dispersing into the ground which is why you see areas like this along the easments: pic.twitter.com/tGQly5mTjL

Using research published in the International Journal of Greenhouse Gas Control, and assuming pipelines could capture all carbon dioxide generated through ethanol production, the letter estimated that at best, a pipeline could prevent 12.8 million metric tons of CO2 from entering the atmosphere.

The U.S. transportation sector, including cars, trucks, and airplanes, discharged 1.57 billion metric tons of CO2 in 2020. Total CO2 emissions by all activities in the U.S. that year were an estimated 4.72 billion metric tons (U.S. Environmental Protection Agency 2022). Based on those values, CO2 emissions from the U.S. transportation sector would be 37 times greater than what might be captured at ethanol plants, while CO2 emissions from the whole U.S. economy would be 110 times greater. Thus, the process of capturing CO2 at ethanol plants, transporting it by pipelines through Iowa and other states, and storing it underground would have trivial effects on our nation’s CO2 emissions.

CO2 EMITTED FROM TAILPIPES WOULD VASTLY EXCEED WHAT PIPELINES CAPTURE

The U.S. Environmental Protection Agency has found that fossil fuel combustion in the transportation sector was "the largest source" of U.S. greenhouse gas emissions in 2020. The most common ethanol blend available for sale is E10 (10 percent ethanol), and a U.S. Department of Agriculture report on greenhouse gas emissions from corn-based ethanol found that for every gallon of E10 used in a vehicle engine, 19.0 pounds of CO2 is released from the tailpipe.

The U.S. Energy Information Administration's data indicates that U.S. motorists "consumed 123.5 billion gallons of E10" during 2020, "which would have resulted in the release into the atmosphere of 1.06 billion metric tons of CO2."

Thus, for the U.S., tailpipe emissions from using E10 in 2020 were almost 25 times greater than the 43 million metric tons of CO2 that could potentially be captured at all the nation’s ethanol plants.

This year, Iowa lawmakers approved and Governor Kim Reynolds signed a bill that will require most Iowa fuel retailers to sell higher ethanol blends. But increasing the amount of E15 (15 percent ethanol) used would have little impact on tailpipe emissions of CO2.

Furthermore, the letter to the Iowa Utilities Board notes, vehicles using ethanol rather than regular gasoline typically get 4 to 5 percent fewer miles per gallon of fuel consumed, due to the lower energy content of ethanol. "Consequently, CO2 emissions per mile traveled are as high or higher for ethanol blends than for pure gasoline."

"CORRUPTION OF THE IDEAL OF PRIVATE SACRIFICE FOR PUBLIC GOOD"

The eminent domain process, which allows private land to be condemned, is supposed to be used only for projects serving some public interest.

"Given the link between land health and farm productivity and the paucity of relatively undisturbed forests and grasslands in Iowa," the letter to the utilities board says, "it would seem that a very large benefit to the public should accrue to offset the damage incurred from building private CO2 pipelines through the fields and timber of hundreds of Iowa citizens."

But if the carbon dioxide captured by pipelines would hardly dent U.S. greenhouse gas emissions, and would be dwarfed by emissions from tailpipes on vehicles using ethanol, then there is no public environmental benefit to allowing the pipeline projects to proceed. The letter concludes, "Issuance of permits for CO2 pipeline construction would be a betrayal of public trust and a corruption of the ideal of private sacrifice for public good. Permitting should be denied."

Another point underscoring the lack of any public benefit to these plans: in more than two dozen counties in the pathway of one or more proposed CO2 pipelines, county boards of supervisors have submitted formal objections to the Iowa Utilities Board. Food & Water Watch is maintaining an interactive graphic showing the counties affected by each of the three proposals and which ones' boards have objected.