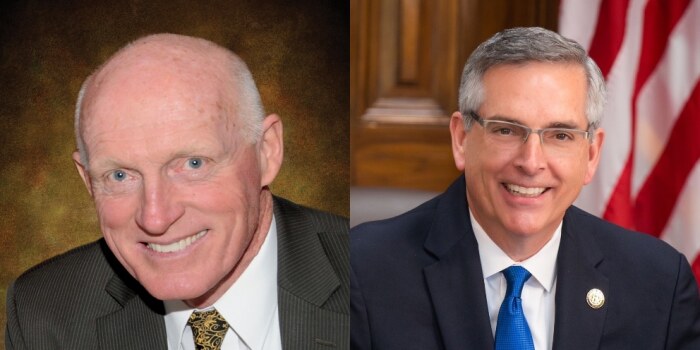 This column by Rick Morain first appeared in the Jefferson Herald.

“You’ll never take back our country with weakness, you have to show strength and you have to be strong.”

“If you don’t fight like hell, you’re not going to have a country anymore.”

---President Donald Trump, in his speech to supporters on the Ellipse on January 6, 2021, before the attack on the Capitol later that day

For Trump, “strong” means supporting his Big Lie that the 2020 election was stolen from him. Trump-strong means doing whatever it takes, legal or illegal, to help him remain in power after the January 20, 2021 presidential inauguration date.

Soon after the November election, Trump knew he had lost to Democratic candidate Joe Biden. Attorney General Bill Barr, members of the White House legal staff, and other official advisers in his administration had told him so, patiently explaining how each of the fraud claims he and his rogue campaign cabal trotted out were false.

But admitting he was wrong has never been in the Trump playbook. To this day, more than a year and a half after the Capitol attack, he still clings to the Big Lie.

If Trump were alone in that camp, it would be no big deal. But it’s not. Millions of his acolytes, for whatever reason, still believe whatever he says, or they say they do for their own reasons. Some of them proved dangerous the afternoon of January 6, and some are still dangerous today.

So who showed true strength for our nation when Trump ramped up the Big Lie after the November 2020 election? Who stayed "America Strong"?

For starters, some of those folks showed up at the June 21 public hearing of the House Select Committee investigating the January 6 events.

There’s Rusty Bowers, Republican speaker of the Arizona House of Representatives, who has served in that legislature for seventeen years. Mr. Bowers voted for Donald Trump and supported him in the 2020 election.

But when Trump and Rudy Guiliani phoned him twice in the month following the election to pressure him into calling a special Arizona legislative session or committee—which would declare that Trump, not Biden, had carried Arizona—Bowers firmly said he would not.

As he wrote later in his daily journal, “I do not want to be a winner by cheating. I will not play with laws I swore allegiance to. With any contrived desire towards deflection of my deep foundation desire to follow God’s will as I believe He led my conscience to embrace.”

Bowers held firm despite the more than 20,000 emails, voicemails and texts his office received. On Saturdays during those weeks, thousands of Trump supporters showed up outside his Arizona home, some of them with video panel trucks proclaiming him to be a pedophile, a pervert, and a corrupt politician, blaring loudspeakers in his neighborhood and leaving literature on his property and that of his neighbors. His daughter was gravely ill at the time.

How about Brad Raffensperger, Republican Secretary of State in Georgia, a self-described conservative Republican who had wanted Trump to win the 2020 election?

He was proud of the way officials conducted the election in Georgia. Despite Raffensperger’s personal preference, Biden carried Georgia by about 12,000 votes.

But Trump continued to claim, without any basis in fact, that there was “massive voter fraud in Georgia.”

For the past year, Raffensperger has been driving throughout the state. What he discovered was that 28,000 Georgians on Election Day 2020 did not cast a vote in the presidential race and then voted down ballot in other races.

On January 2, 2021, Trump phoned Raffensperger and pressured him for 70 minutes to declare that election fraud had been committed in Georgia. Some of the most revealing Trump quotes from that call:

Like Arizona’s Bowers, Raffensperger got thousands of argumentative texts from all over the nation. His wife did too, many of them what Raffensperger described as “sexualized attacks which were disgusting.” People broke into his daughter-in-law’s house; she’s a widow with two children.

Raffensperger held his ground. As he told the committee, “Sometimes moments require you to stand up and just take the shots. You’re doing your job. And that’s all we did. . . . “I had to be faithful to the Constitution. And that’s what I swore an oath to do.”

America-Strong. Good on you, gentlemen.

Rick Morain is a reporter and columnist with the Jefferson Herald. He is the former publisher and owner of that newspaper with deep roots in his family. Rick Morain has been active in political and economic development circles in Iowa for more than a half century.

Editor's note: Rusty Bowers talked more about the pressure campaign he faced in an interview with Jonathan Karl of ABC News, broadcast on July 31.