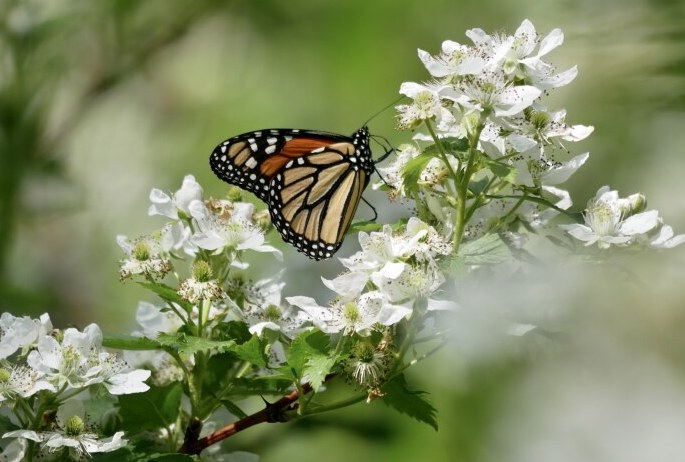 Let me share several verbal bouquets I encountered in reading articles about monarchs. “Showy looks.” “Extraordinary migration.” “One of the natural world’s wonders,” and, “one of the continent’s most beloved insects.” Unfortunately, I also came across some very troubling terms, like “endangered,” “vulnerable populations,” “declining precipitously” and “teeter(ing) on the edge of collapse.” Suffice to say, it all captured my attention.

Monarchs have been in the news a great deal lately. Appropriately so.

They recently made the endangered classification compiled by the International Union for Conservation of Nature, “the world’s most comprehensive scientific authority on the status of species,” according to the New York Times. If there are glimmers of optimism, however, it’s that we can actually do something about disturbing monarch trends.

First, the devastating statistics. The number of Western monarchs, living west of the Rocky Mountains (not ours) fell 99.9 percent between the 1980s and 2021, from approximately 10 million butterflies in the 1980s to fewer than 2,000 in 2021. Wow!

Eastern monarchs (our butterflies), covering most of North America, dropped 84 percent between 1996 and 2014, a startling statistic, unfortunately not very current. An update, from July, 2022: “This population shrunk by between 22% and 72% over the past decade,” depending on the measurement method. Realizing this is a huge statistical range, overlapping slightly with the previous timeframe, regardless of precision, these numbers are simply dreadful.

Why is this happening? Experts say it’s a combination of factors… climate change, loss of essential milkweed plants, and habitat destruction of overwintering areas, most of which took place in Mexico and was halted years ago. Anna Walker, an etymologist who led the latest assessment, cites a relatively recent cause: farmers, particularly Midwestern farmers, planting crops genetically modified to withstand glyphosate, the herbicide in Roundup.

Accordingly, “glyphosate was sprayed over vast acreages in the Midwest that took out a lot of the milkweed plants that monarch caterpillars rely on,” notes Walker. That, plus climate change, which disrupts cycles and alters temperatures while boosting storms and droughts, can be catastrophic for monarchs and other endangered populations.

Please note, designation by scientists provides no legal protections for the species, no federal protection based on the Endangered Species Act, nor does it require anyone to behave differently. Two years ago, when the U.S. Fish and Wildlife Service knew monarchs were threatened with extinction, it chose not to designate them as an endangered species. They stated monarchs were “precluded” from the list since they weren’t as much at risk as other species; there were other higher priorities. I trust this decision will be overturned soon.

So, now that we’re aware of the problem, what can be done? In 2015, the Obama administration launched efforts to plant milkweed along Interstate 35, from Texas to Minnesota.

The same year, Iowa organizations formed the Iowa Monarch Conservation Consortium at Iowa State University to better understand and respond to the situation. This consortium now consists of 40 organizations – agricultural and conservation associations, agribusiness and utility companies, colleges and universities, and county, state, and federal agencies. IMCC’s goal, articulated in 2018, is to establish 480,000 to 830,000 acres of milkweed in Iowa by 2038, plans worthy of generous financial support.

Butterfly champions are already planting milkweed across our region, on the monarchs’ fly zone. We can, and should, all join in. There are up to a dozen milkweed varieties that flourish in the Midwest. Knowledgeable people recommend planting a variety, with at least some likely to thrive during any given year. To create a monarch haven, flowering plants are also needed to provide butterflies with an ample nectar supply.

Last point: Monarchs are a classic example of “a canary in the coal mine." What other species, perhaps not as beautiful as monarchs, are severely stressed by modern practices? One such specie may be humankind. I certainly hope I’m wrong about this.