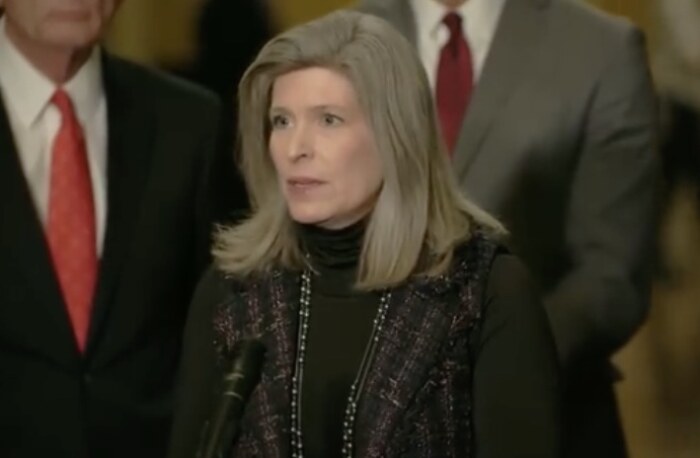 Iowa's U.S. Senator Joni Ernst was among twelve Republicans who helped Democrats pass the Respect for Marriage Act on November 29. Her vote reflected both a personal evolution and a smart political calculation.

The bill would repeal the federal Defense of Marriage Act, which banned same-sex marriages when it was enacted in 1996. It would also "require the federal government to recognize a marriage between two individuals if the marriage was valid in the state where it was performed." Finally, although the bill would not require states to issue marriage licenses to same-sex couples, it would require states to give marriages performed elsewhere "full faith and credit, regardless of the couple’s sex, race, ethnicity, or national origin."

Senate rules require at least 60 votes to overcome a filibuster by the minority party, and the vote on final passage was 61-36 (roll call). Iowa's Senator Chuck Grassley was one of the 36 Republicans who opposed the bill.

Ernst's support was no surprise, since she voted two weeks ago to advance debate on the bipartisan compromise.

However, she did acknowledge lingering Republican concerns by backing three amendments that GOP senators offered during the Senate's November 29 session. None of those amendments, which purported to strengthen religious liberty protections, had enough support to pass. GOP Senator Rob Portman, who was part of the group that negotiated the bill, explained on the Senate floor that the compromise already had robust protections for religious organizations that don't recognize same-sex marriages.

Since senators amended the bill text, the legislation must return to the U.S. House before going to President Joe Biden. Three of Iowa's four House members—Democrat Cindy Axne and Republicans Ashley Hinson and Mariannette Miller-Meeks—voted for the Respect for Marriage Act in July and are expected to support the new version.

Ernst's office did not send a news release following the bill's final passage. Earlier this month, the senator said in a written statement, “After hearing directly from Iowans, and closely reviewing the amended language, I believe this bill protects religious freedoms and will simply maintain the status quo in Iowa."

Grassley's office also did not release a statement on November 29. After voting to block the legislation two weeks ago, the senator asserted the bill would "put people with certain sincere religious beliefs at greater legal risk." He also claimed there was no need to codify same-sex and interracial marriage rights, because no one was threatening to revoke those privileges.

Although Ernst was not a "loud and proud" supporter of the Respect for Marriage Act, like some of her GOP colleagues were during the Senate floor debate, her vote was significant. As a member of the Iowa Senate in 2013, she co-sponsored a state constitutional amendment that would have declared, "Marriage between one man and one woman shall be the only legal union valid or recognized" in Iowa. (The bill did not advance in the chamber, which Democrats controlled at the time.)

Like millions of Americans, Ernst has come around to accepting legal rights for LGBTQ couples. This legislation doesn't go as far as I would prefer, but it's a backstop against future efforts to roll back marriage equality through the conservative-dominated U.S. Supreme Court.

Becky Tayler, executive director of the advocacy group Iowa Safe Schools, thanked the senator in a statement that observed, “The same-sex parents we support and our educators with same-sex spouses will feel better knowing that the federal government respects and validates their marriage.”

Ernst's vote was also politically wise. Whereas Grassley is unlikely ever to appear on another ballot, Ernst will be up for re-election in 2026 and could potentially seek several more terms in the Senate. As marriage equality has gained broad acceptance, a vote against protecting marriage rights for LGBTQ couples would look worse with each passing year.

Far better to be on the right side of history.

Top image: Screenshot from video of Senator Joni Ernst speaking about energy policy at a Republican leadership news conference on November 29. Ernst did not speak during Senate debate on the Respect for Marriage Act.