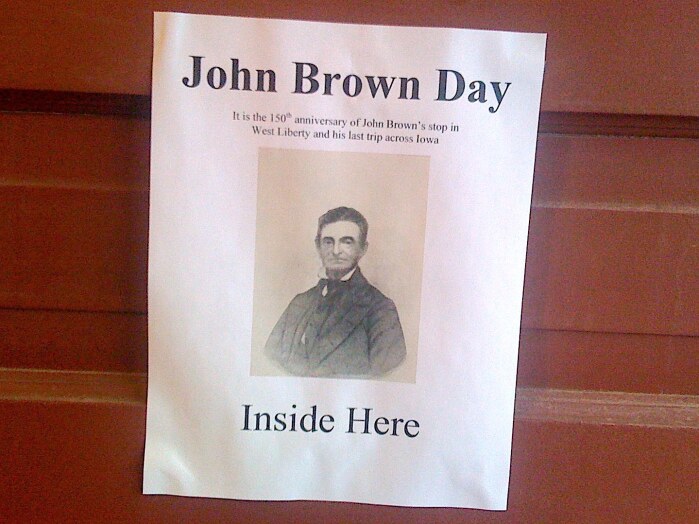 Cedar County was one of John Brown’s favorite stops on several trips through Iowa, 1855 to 1859, but he set foot in Muscatine County only once.

You can read about it on a marker outside the historic West Liberty depot. Following are passages from three other sources.

Muscatine’s Irving B. Richman tells in John Brown Among the Quakers (1894):

[They] enlisted the services of Mr. William Penn Clark[e], an influential anti-slavery citizen of [Iowa City], and by hís efforts, supplemented by those of Hon. J.B. Grinnell, a freight car was got and held in readiness at West Liberty. The negroes were then brought down from Springdale (distant but six miles) and, after spending a night in a grist mill near the railway station, were ready to embark. It is an interesting scene that was beheld by the people of West Liberty this March day of 1859 on which John Brown was loading his car with dusky passengers for Canada and Freedom. Huddled together in a little group near the track, stand the negroes, patient, wondering. Near them, leaning on their Sharp’s rifles, heavy revolvers in their belts, on the alert, stand Kagi and Stephens. In a few minutes the freight car which has been got with so much trouble…is pushed by a crowd of men down the side-track to a point convenient for the loading. Brown mounts into it and shakes the door and lays hold of the sides that he may judge of its capacity for resistance in case of attack. Clean straw is then brought to him which he spreads over the floor. After this, the negro babes and small children, of whom there are several, are handed up to him and he tenderly deposits them among the straw. The older negroes are next helped in, and all is ready. The passenger train on the Chicago and Rock Island Road rolls in from the West. For a moment there is suspense. Is the United States Marshal on board? No! The train draws out from the station, stops, backs down on the side-track and is coupled to the freight car. Kagi and Stephens get into one of the passenger coaches, and John Brown is leaving Iowa for the last time.

At the Harpers Ferry symposium in 2009, I met Fergus Bordewich, author of the acclaimed Bound for Canaan: The Underground Railroad and the War for the Soul of America (2005). In his account, West Liberty is simply J.B. Grinnell’s “nearest railhead.”

For the next month, the fugitives were hidden in a cabin across the state line in Kansas. In late January 1859 Brown and the twelve fugitives (a baby having been born in the interim, and christened ‘John Brown’), set off northward toward Nebraska with the fugitives in an ox-drawn wagon and an armed guard of fifteen abolitionists, dodging proslavery guerrillas, marshals’ posses, and at one point fending off a much larger force of United States troops, taking several of them prisoner. … They traveled east along an established underground route through lowa, via Tabor and Grinnell, where they were welcomed by Josiah Grinnell, the founder of the college that bears his name. Grinnell personally reserved a boxcar for Brown’s party at the nearest railhead, to carry them directly to Chicago, which they reached on March 10.

Lowell Soike reports every stop of the Brown party’s trek in Necessary Courage: Iowa’s Underground Railroad in the Struggle against Slavery (2013). Of West Liberty he says:

This small railroad village, platted in early 1856, had grown to some eighty houses by 1859. Down near the tracks stood Keith’s Mill, a modest grist operation with a steam engine turning two stones for grinding wheat and corn. Albert F. Keith, a thirty-five-year-old Ohioan, had been a dedicated antislavery man since arriving in Iowa in 1852. Most other early West Liberty settlers evidently shared his sentiments. George Gill remembered the mainly Presbyterian settlement to be ‘a very hotbed of abolitionists and in full sympathy with Brown’s ideas.’ To Keith’s Mill friends delivered Brown, his four men, and the twelve fugitives on the evening of March 9. There they remained for the night. Early the next morning an engineer running the first eastbound train from Iowa City dropped off an empty boxcar at a siding close by the mill. Before long, as friendly residents looked on, Brown’s men ushered the liberated families and other material into the freight car so they would be ready for the next Chicago-bound train, due in late morning. Once they had boarded, Brown, Stevens, and Tidd joined them in the boxcar.

And so, John Brown’s company escaped Iowa pursuers across the five-year-old Mississippi River railroad bridge and reached Chicago. Assisted by Allan Pinkerton, the detective, they started for Detroit and met with Frederick Douglass there two days later.

Next time: Alexander Clark and the Iowa Freedom Trail