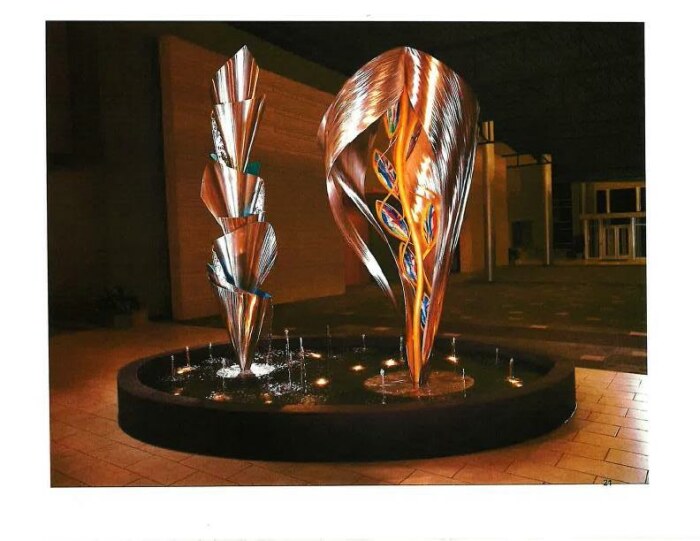 The legislature wrote Iowa’s public records law 55 years ago, and one of the statute's tenets was the belief people deserve to know how state and local governments spend their tax money.

Another important concept in the law is that fees for copies of government records must be reasonable and cannot exceed the actual cost of providing the documents.

That brings us today to Kirkwood Community College in Cedar Rapids, where administrators appear not to grasp what “reasonable” means.

In 2000, the college began talking with New York sculptor Molly Mason, a Cedar Rapids native, about creating a large piece of art for the Kirkwood campus. Those discussions led to Mason receiving an $80,000 contract to design, fabricate and install a large metal and glass sculpture in 2008 in the atrium of the building that houses Kirkwood’s convention center and hotel.

Mason’s 14-foot-tall stainless-steel structures are titled, “Before the Sun Speaks.” They originally stood in a middle of pool of water, with an array of small fountains around the sculptures’ base that gently sprayed water.

In the summer of 2020, a friend alerted Mason that changes had been made to her artwork. The fountains had been shut off, the water was drained, and the basin around the sculptures was filled with potted plants.

“My beautiful sculptures and water features at Kirkwood have been turned into an overgrown planter,” Mason wrote to Kirkwood after learning of the changes. “This intentional distortion and mutilation of my work is prejudicial to my honor and reputation.”

Mason sued the college, alleging Kirkwood infringed on her copyright on her sculptures and violated a federal law that provides legal protections to visual artists whose work is made part of a building.

The college tried without success last summer to get a federal judge to decide the case in the college’s favor. Before a trial on the merits of the lawsuit could be held, Kirkwood and Mason reached an out-of-court agreement to end the dispute.

Under Iowa’s open records law, settlement agreements that resolve legal disputes must be made public upon request. Last week, as part of my duties as the executive director of the Iowa Freedom of Information Council, I submitted a formal request to Kirkwood President Lori Sundberg asking for a copy of that agreement with Mason.

College Vice President Jon Neff advised me that a copy of the document would cost $100.

He said the cost includes one hour of an employee’s time, charged at $50 per hour, for “data location services.” In English, that means it would take an employee making $104,000 per year one hour to locate a Microsoft Word document that President Sundberg reviewed and approved two months ago.

The $100 cost also includes another hour of work, also payable at $50 per hour, for “processing, formatting and data transfer” of the settlement document. In simple English, that means it would take 60 minutes for a $104,000-a-year employee to either hit the “Print” button on his or her computer and drop the document in the mail to me or save the document as a PDF file and send that to me via email.

In plain language, Kirkwood’s fees are outlandish. We no longer live in a time when government offices are filled with rows of file cabinets stuffed with records. Before computers and computer searches, a clerk might need to spend an hour or more digging through file drawers to find a document like the one I requested.

Now, a clerk in President Sundberg’s office could locate the settlement document with Molly Mason and make a copy in a matter of minutes—if the college were so inclined.

But Kirkwood’s response to my request is an example of what I call “faux transparency.” This is where government officials appear to happily comply with the requirements of the public records law, while levying fees so high that the obvious purpose is to put the cost out of reach for Joe Average Citizen.

I have obtained similar settlement agreements through the years and have never had to pay more than a buck or two, if that much. For example, the Des Moines Public Schools provided such an agreement last year via email within minutes of receiving my request—and at no cost to me for “processing, formatting and data transfer.”

It is far from reasonable for a community college financed by Iowa taxpayers to think it is justified in charging $100 for a document that might total ten or twelve pages.

Kirkwood officials should be embarrassed to suggest with a straight face that it will take an hour to find that agreement and will take another hour to make a copy of it.

UPDATE: After Randy Evans wrote this column, Kirkwood provided the settlement agreement at no charge. "Under the agreement, sculptor Molly Mason has 180 days to remove the 14-ft-tall artwork at her expense."

Top photo of the sculpture by Molly Mason appeared in a federal court filing.