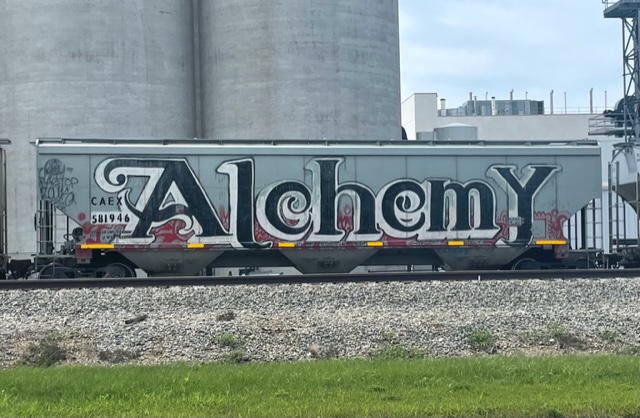 I don’t know when I first encountered the word “graffiti.” It probably happened in high school. I vaguely recall a late-night adventure that included spray painting “class of ‘72” on a few country bridges… and maybe on the rear window of a school bus. Upon reflection, I think our gang of (mostly) benign rascals was simply ahead of our time. Graffiti was not a major public nuisance at the time.

Then, too, maybe our semi-legible scribbling was an early example of graffiti art, arguably the only visual art form with its origin in the U.S. Since graffiti art is too broad a subject to tackle here, I will concentrate more narrowly on freight graffiti, defined as expressive painting on train boxcars.

[Before another admiring word, what these “writers” are doing is illegal. The term “writers” here is short for freight train graffiti writers, which seems to have won out over “graffiti artists”.]

Writers are remarkably skilled at their criminal activity. My appreciation of their work is like marveling at a safe-cracker, sensing tumblers falling into place before opening a vault. It’s a gift few have… yet talent cannot justify burglary or, for the aforementioned writers, defacing property. As is evident, I’m conflicted here, in awe of skill but opposed to lawlessness.

Today’s freight writing is an extensive subculture that began in New York on passenger subways in the late 1960s and blossomed in the 1970s and ‘80s. Eradication efforts aimed at subway art began in the early 1970s, as defaced cars were quickly pulled from service. One historian noted that writers were “temporarily derailed” (ha) and switched to freight trains, lured by viewership potential. As writers focused on minimal-security train yards, boxcars became traveling canvases. Graffiti migrated from an urban activity to a national spectacle, rooted in the flair of young people, visible wherever tracks ran.

So, why do writers apply their skills to the sides of trains? My non-exhaustive research revealed four major motives: pursuing an outlet; achieving excellence; seeking fulfillment and thrills; and attaining recognition. In varying degrees, similar desires burn in the soul of almost every artist. Why should freight writers be any different? (… while I hasten to add, most other artists are not violating laws.)

During my period of heightened attentiveness, I have witnessed exceptional examples of panache and polish, ingenuity and imagination. Furthermore, as long as freight trains intersect the landscape, they will undoubtedly transport art in addition to commodities. I say this because art-related offshoots have recently fanned out into the still small world of those who care about freight writing. Already, this has resulted in glossy photobooks, writers’ “hall of fame” lists, museum exhibitions, documentary films, graffiti supply stores, slang glossaries, and so on, preliminary indications of a stubborn staying power, at least into the foreseeable future.

While exploring this topic, I often encounter the word “benching,” defined as watching freight trains pass by while admiring the graffiti. I wish to create a new slang term, “starewheeling” or maybe “driverseating,” which means driving by stationary boxcars while soaking in the edgy artistry of mostly anonymous writers, at least anonymous to me.

Suffice to say, I love serendipitous art encounters, although I realize not everyone does. Fortunately for me, regional railroads curate an informal, ever-changing display of modern art on boxcars. I am not provided with any guidance, context, or even writers’ names, nevertheless, I often slow to “starewheel” my way along a demonstration of raw talent. And wonder if graffiti writers might apply their skills for hire on massive grain elevators that dot the rural landscape. Just a thought.

Top photo and those enclosed below provided by the author and published with permission. He took all of these pictures of trains waiting in St. Ansgar (Mitchell County). 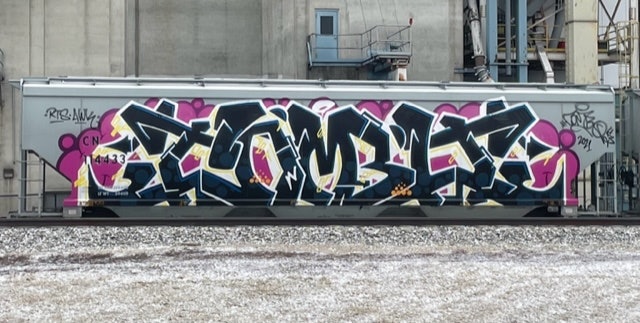 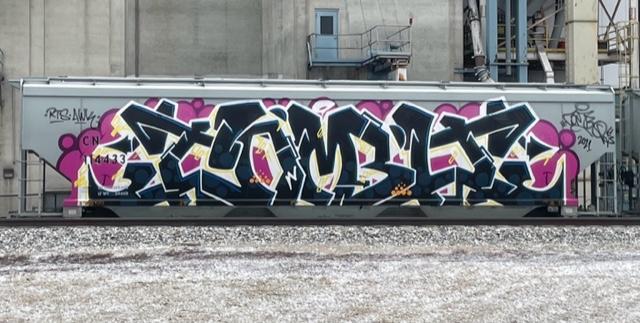 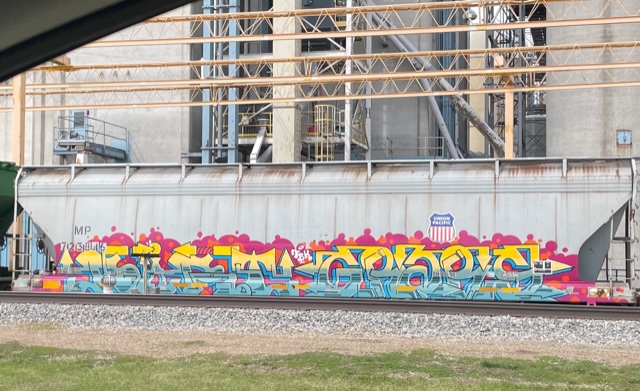 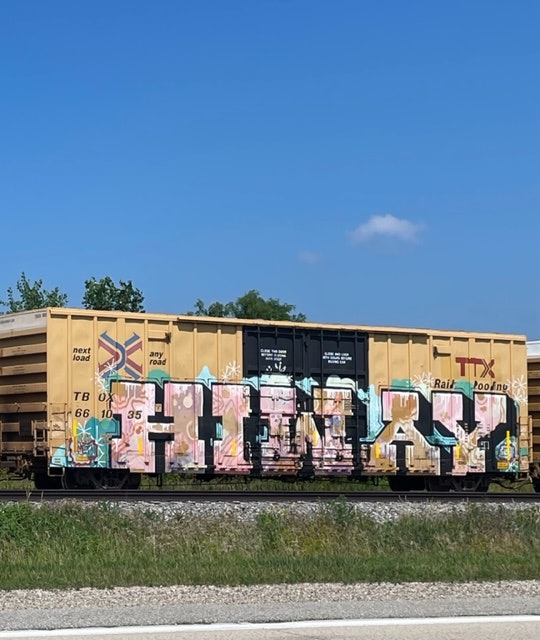 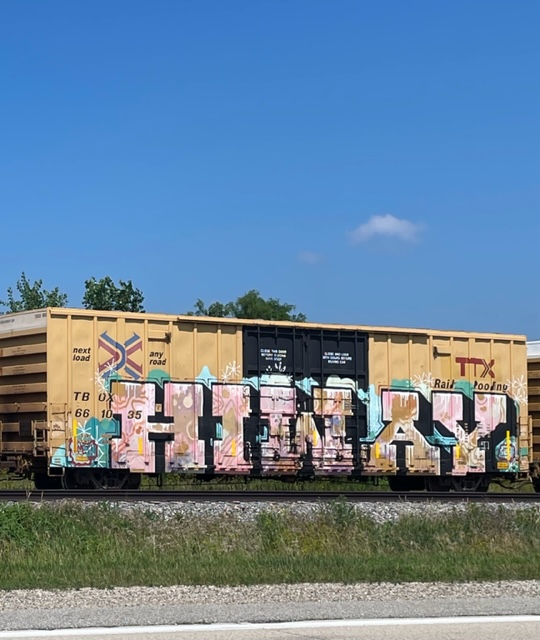