The Register and blue ghosts from 1974

The windowless Office Lounge bar on Grand Avenue nestled across a narrow alleyway from the Register and Tribune Building in downtown Des Moines was a hopping place in the early morning hours of Wednesday, November 6, 1974.

Longtime Office Lounge owner Dorothy Gabriel continued her election-night tradition of keeping the Register’s semi-official bar open after hours (to the apparent indifference of the Des Moines police) so that the newspaper’s staff could blow off the heat and tension of election night.

Senator Joni Ernst shouldn’t be in this position.

Given Iowans’ tendency to re-elect incumbents and the state’s rightward drift this past decade, she should be running ten points ahead.

Instead, Iowa’s Senate race is universally seen as a toss-up. Ernst has led in only two polls released since the June primary. Democratic challenger Theresa Greenfield has led in fourteen polls during the same period.

Not all of Ernst’s political problems are her own creation. The COVID-19 pandemic and President Donald Trump’s disastrous leadership have put at risk several GOP-held seats that once seemed safe.

But Ernst could have set herself up better to survive a tough environment for her party. Her most important strategic error was not following the example Chuck Grassley set as a 40-something first-term senator.

Former U.S. Senator John Culver passed away in late December. I’ve asked several Iowans who knew him well to share some of their memories with Bleeding Heartland readers. Thanks to Kurt Meyer for these wonderful stories about Culver’s 1980 re-election campaign. -promoted by Laura Belin

As has been noted often in recent days, the late Senator John Culver was a remarkable individual, with warm praise forthcoming both for the breadth of his knowledge as well as the depth of his integrity. One reason these thoughts resonate is the contrast with current officeholders at almost every level.

While both of these qualities are notable, they are challenged for primacy in my reflection on John Culver by the senator’s outsized personality. He was fun; he was engaging. He was a great story-teller, who, ironically is himself the focus of many a great story, a rather unusual combination.

In 1980, Senator Culver, then seeking re-election, took a flyer on a couple of 25-year-olds open to adventure to head up in-state fundraising for his campaign. Having agreed to this assignment, my wife, Paula, and I set aside early careers in the Twin Cities and moved to Des Moines. Paula had not worked in a campaign before; I had, in both 1974 and 1976. (Our marriage in 1978 confined campaign involvement to a brief assignment coordinating a GOTV phone bank for the Hennepin County, MN, Democratic-Farmer-Labor Party.)

In retrospect, Paula and I came to regard 1980 as our short-term, Peace Corps-like experience: scrambling to achieve bold objectives in relatively uncharted territory, working ourselves silly for a greater cause in hopes of a better world… and perhaps bringing about some personal growth and maturity. We began in early January and vacated our modest apartment (and Iowa, at least temporarily) the day after the election in November.

Our 10-month campaign experience was unforgettable for many reasons, not least of which was that we worked for and with and under the banner of John Culver. The overall fund-raising strategy was relatively simple: to sponsor an ambitious series of events across the state, mostly gatherings in people’s homes in county seat towns, to re-introduce the senator, enabling Iowans to hear from him and question him directly, and conclude with a pitch for support.

It was vitally important for us to generate in-state financial support, with significant implications for our field/organizing operations. And, yes, clearly such efforts should have been taking place in an organized, low-key manner for at least three, maybe four years, rather than embarking on an aggressive “cramming” effort shortly before the final exam in early November.

Nevertheless, operating under a tight schedule, we set off, eager to do everything possible to advance the Culver campaign. For example, we aggressively marketed “Culver Corn Pins” (a lapel pin in the shape of an ear of corn, which had been part of the senator’s first congressional campaign). We sponsored a statewide lottery to win such a pin with a small diamond stud embedded. We sold and mailed complimentary copies of the book, Senator, by Elizabeth Drew, some of which included a “take-a-look” letter signed by Tom Stoner, who had sought the Republican Senate nomination to compete against Culver. Frank Licciardi, a gifted Dubuque artist, volunteered to paint a portrait of Culver, and we sold prints for something like $20. A signed and numbered version went for $100.

We hosted periodic heavy-hitter receptions with out-of-state guests, although the senator was unusually wary of surrogates coming into the state to campaign on his behalf. Two who did pass muster were Senator Bill Bradley of New Jersey and Senator Muriel Humphrey of Minnesota, appointed to serve out her late husband’s term. Vance Bourjaily hosted a Culver fundraiser at “Red Bird Farm” in Johnson County that required no reminder calls. “Oh, people will come,” we were told – and they did (and many wrote checks!). Harry Chapin and Jackson Browne performed small-scale benefit concerts, each generating a bit of cash and presumably some favorable buzz among a more youthful demographic (but before social media, who knows… maybe buzz by word-of-mouth?).

Many of these efforts were designed primarily to expand our Iowa donor base, in the hope of re-soliciting support at least two or three more times prior to November. Looking back, it was all quite basic and unsophisticated, labor-intensive, and often inefficient. But it worked. Thousands of donors in every corner of the state wrote checks for $25 and $50 and $100, some of them two and three and four times. We lost the election, to be sure, but we did NOT fall short due to lack of generous funding support.

An elderly woman from Dubuque faithfully mailed us a check of varying amounts every month, accompanied by a scribbled, hard-to-decipher note of support and encouragement that was almost as valued as the check. When we happened by coincidence to encounter her frail presence on a trip to the Guggenheim Museum shortly after the election, we almost hugged her to death!

Among the more indelible moments of this entire experience were the many fervent Culver supporters who housed us, fed us, supported us, advised us, encouraged us, and in many cases, handed us checks almost every time we saw them. After 39 years, some of these wonderful people, just like the senator, have gone on to their reward; many of those remaining are dear friends.

Examples of steadfast hospitality had a profound and long-lasting impact on this once-young couple. Paula and I have endeavored to model similar support for candidates and, perhaps as important, for their staff members since we returned to Iowa fifteen years ago, with invitations extended to many campaigns willing to venture north of highway 3 to join us at our home, “Tranquillity.”

Driven by conviction, by a commitment to public service, and by thinking (more than mere feeling), John Culver adhered to high standards, for himself and for all around him. His belief in the power of persuasion – based largely on facts, often presented orally – makes him a throwback politician, at least from today’s vantage point.

While Culver grasped the big picture, he often took great pains to interpret subtle observations, nuances, and small “hinge” points on which mighty matters can swing. He took pains to provide detailed explanations to Iowans he knew wanted to hear more than just two or three talking points.

As noted, John Culver was both brilliant and a model of political integrity. Furthermore, he had a personality as expansive and varied as our state. He often demonstrated “white-hot intensity,” a term the Des Moines Register once used to describe him, which was certainly preferable to “a hair-trigger temper,” a term the newspaper did NOT use but which, truth be told, they easily could have.

Like many politicians, John Culver was great in front of a crowd; at the same time, he was especially comfortable in a setting with a half-dozen people he knew and liked. With that in mind, let me close with one Culver story (and, suffice to say, there are many). The senator’s favorite place in the world was his home in McGregor, overlooking the Mississippi River. Here he had hosted President Jimmy Carter in 1979 when the president and the first lady were on a well-publicized river cruise. And here he hosted three Des Moines Register reporters interested in traveling with him in the fall of 1980.

Jim Flansburg, Donald Kaul, and David Yepsen accompanied Senator Culver to his home in McGregor on an overnight trip that required a staff member to serve as a one-person hospitality crew. I drew the assignment. The rambling Culver home had once been a hotel and accommodations were certainly adequate to this number of guests, all of whom arrived after the evening meal. The greatest challenge I faced was cooking breakfast on a huge beast of a stove the house was probably built around, since it was way too large to move either in or out.

With dawn approaching, I arrived in the kitchen well in advance, leaving adequate time to acquaint myself with my short-order cook assignment. Provisions were set out: eggs, bread, bacon, cast iron pans, a trusty toaster, a plug-in percolator, etc. Yes, I was a bit nervous, but the whole excursion had taken on the flavor of a fishing trip, so I assumed no one expected haute cuisine. When at the appointed hour, hungry men emerged for the day, I set to work, asking each how he wanted his eggs.

“Mr. Flansburg?” (…yes, a formality prompted by respect.) “Scrambled would be fine.”

“Senator?” Pause. Pause. “Poached!” (Hey, I HAD asked… and as I recall, I somehow succeeded in digging appropriate poaching equipment out of the pantry!)

So, before closing, and in light of this story, let me add a few Culver traits to the aforementioned: independent-thinking; unswayed by public opinion; capable of reaching his own conclusions; and not afraid to chart his own course, even if and when it means standing alone.

John Culver was a remarkable individual. Many, probably most, of whom worked closely with him were intensely loyal to him when he served in public office, throughout the intervening years, and now… both to his memory and to what I trust will be his enduring political legacy. Count Paula and me proudly among them. 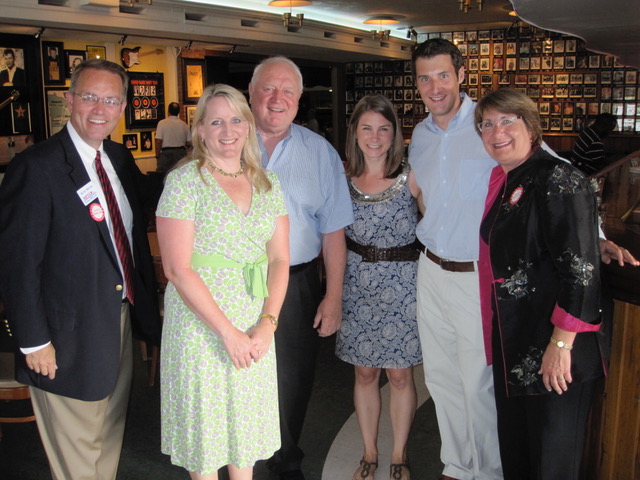 Following up on the diary I posted this morning, this post compiles links to Bleeding Heartland's coverage of national politics from July through December 2009. Health care reform was again the number one topic. I wish there had been a happy ending.

I spent most of Saturday in Coon Rapids at the events celebrating the 50th anniversary of Nikita Khrushchev’s visit to Iowa, so I missed the live coverage of Ted Kennedy’s funeral. Several people told me former Senator John Culver’s remarks were a must-see, so I wanted to post the video for the Bleeding Heartland community:

Share any thoughts about the Kennedy funeral or legacy in this thread.