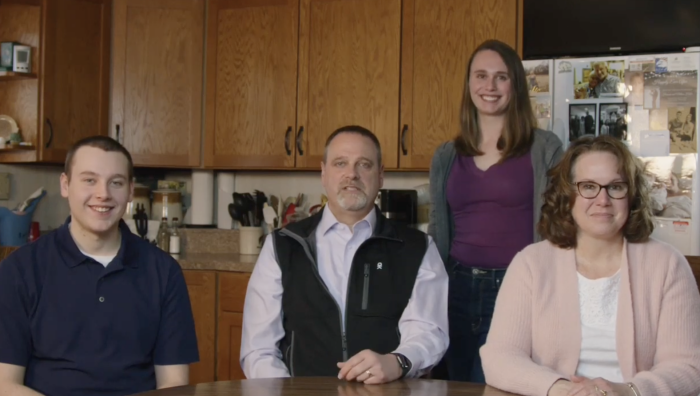 Iowa Democrats have only two competitive statewide primaries this year: for U.S. Senate and for secretary of state. Both Democrats running for the latter office are long-serving county auditors who are not widely known outside their home counties (Linn County for Joel Miller and Clinton County for Eric Van Lancker).

Van Lancker began introducing himself to a wider circle of voters this week with his first digital ad. The 60-second spot highlights the benefits of early voting. According to an April 5 news release, the campaign will release a 30-second version of this ad for television in May. Under a law Republicans enacted last year, Iowa's early voting period will begin on May 18, just 20 days before the June 7 primary.

The spot feels personal, because Van Lancker and his immediate family speak to the camera in their own voices. The candidate says he's "been a voter advocate for four terms, fighting to make it easier to vote early and to vote by mail, because I know my family is just like yours."

The candidate's wife Tanya Van Lancker says that as a public school teacher for 29 years, "I like it when my students turn their assignments in early." Son Jack likes to vote by mail because as a paramedic, "I never know when an emergency is going to happen." Daughter Caitlyn works long hours as a server, "so I like to vote early by mail."

Van Lancker promises, "When I'm secretary of state, I'm going to restore early voting back the way it was, and make sure that all Iowans have confidence in the integrity of our elections."

That pledge may resonate with many Iowa Democrats, who resent how Republicans have attacked early voting from every direction, and made it particularly difficult to vote by mail. (Some of the new restrictions are being challenged in court, but that lawsuit may not be resolved before the November election.)

Unfortunately, the secretary of state can't make those problems go away. Undoing the damage would require legislative action, and Democrats are far from winning back the Iowa House and Senate.

When House members debated last year's bill, GOP State Representative Bobby Kaufmann denied it would disenfranchise anyone, saying he trusted Iowans to "make a plan" and adjust to the new deadlines. But local elections have already shown that a compressed early voting period squeezes some voters out of the process. Hundreds of Iowans have submitted absentee ballot request forms too late to receive a mailed ballot, even though their requests would have arrived in time under the previous law.

Polk County Auditor Jamie Fitzgerald tweeted this week that 112 Ankeny voters who wanted to vote by mail in a March 29 special election "sent their request for an absentee ballot to be mailed to them after the new 2021 deadline, which would have been good in 2020. 74 of the 112 voters that missed the new deadline did not vote."

Van Lancker's primary opponent has also bashed Republican policies on early voting. Miller commented on Fitzgerald's tweet that the GOP-controlled legislature has engaged in "voter suppression," putting a "stranglehold" on mail voting, while Secretary of State Paul Pate "does NOTHING-says NOTHING."

Miller may struggle to raise his name ID before the primary, however. He raised far less money than Van Lancker last year. Iowa candidates for state offices will next report on their fundraising and spending in mid-May.