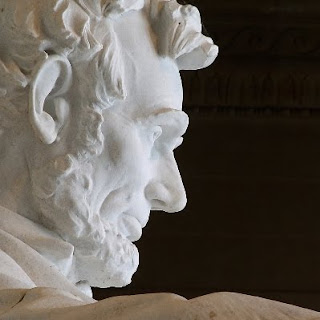 My heart breaks hard every time I think about the selfless men and women we lost in Afghanistan this weekend. Brothers and sisters alike, it seems almost trivial to sit here tonight and type--a freedom they have won for me--while so many are facing grim realities and long, tense moments of combat half a world away.

"It is for us the living, rather, to be dedicated here to the unfinished work which they who fought here have thus far so nobly advanced. It is rather for us to be here dedicated to the great task remaining before us -- that from these honored dead we take increased devotion to that cause for which they gave the last full measure of devotion -- that we here highly resolve that these dead shall not have died in vain -- that this nation, under God, shall have a new birth of freedom -- and that government of the people, by the people, for the people, shall not perish from the earth."

We believe "that government of the people, by the people, for the people" shall reflect the values and humanity of those people. We believe that our markets and our people come together every day, and that their tenacity and innovation are our greatest national assets. Government can't solve all of our problems, and neither can unchecked greed: We believe that both free markets and free people are essential for a free country and a prosperous posterity. And we are reminded that our young men and women shouldn't have to die to prove their country's greatness, but rather, should serve as living proof.

Military might is not the only measure of national strength; private doubts about our financial acuity do not change the reality of our economic strength. The media and Super PACs may reap a windfall from tripping up the United States of America--that's their freedom, in this country we call home.

You cannot quantify, cannot put a premium on the resilience, the grittiness, the resolve of the American people. Whether we're facing down the British redcoats or the regulars of financial speculation, our country sets a consistent standard: triumph. That's something even opinionated talking-heads can't thwart.

You cannot keep us down. You cannot convince us that our lot is anything less than exceptional. It is a birthright we will give to our children and innumerable generations beyond.

This country and her ideals shall never perish from this earth.

We are so resolved.