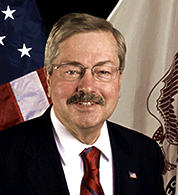 E-mailing practices by government officials have drawn an unusual amount of scrutiny this year, thanks to the national press corps' months-long fixation on Hillary Clinton's use of a private server and e-mail account during her years as secretary of state. Though the most sensational reports about Clinton's e-mails were wrong, a drumbeat of news articles and commentary pointed to her private e-mail use as a scandal, or at least a serious political problem.

For years, people who have submitted records requests for Governor Terry Branstad's e-mails have been told the governor does not use e-mail. So I was surprised this week to see footage of Branstad telling his top donor and Iowa Board of Regents President Bruce Rastetter to "send me an e-mail" with facts about Bruce Harreld, at the time a candidate for the University of Iowa presidency. Iowa Public Television's "Governor Branstad: Behind the Scenes" documentary includes video of Branstad talking with Rastetter during the Iowa State Fair. I transcribed the brief conversation here.

In light of Branstad's comment to Rastetter, I asked the governor's communications director Ben Hammes to clarify whether Branstad has an e-mail account for official or private use. He replied, "The governor does not use email or have email. The governor was referring to sending information to our office, which is what he asks of constituents, when he is traveling around Iowa. He will often ask them to send information to the appropriate policy person in our office."

Since Branstad asked Rastetter to send "me" an e-mail (rather than asking for the background to be sent to his staff), I asked Hammes whether he could confirm that the governor never communicates directly with Rastetter or with anyone else via e-mail, and that "people wishing to e-mail information to the governor can do so only by e-mailing intermediaries." Hammes responded, "Correct. The governor does not have an email account." Duly noted with regret, since the lack of an official e-mail account will make it harder for reporters and future historians to reconstruct Branstad's actions and decision-making process during his fifth and sixth terms.

On a related note, today's New York Times reported that Defense Secretary Ashton Carter "relied on a personal email account to conduct a portion of his government business during his first months at the Pentagon." Today's lead editorial in the Des Moines Register took Des Moines City Council member Christine Hensley to task for, among other things, using a private e-mail account to discuss city business. The newspaper also criticized city policy that allows officials to search for and disclose e-mails that are the subject of open records requests, because those people "lack the technical expertise to conduct document searches" and "have a strong motive to withhold damaging emails they have sent or received." Hensley is refusing to release a legal opinion on whether she should recuse herself from a policy matter because of a potential conflict of interest. The controversy doesn't reflect well on the longtime city council member, who I believe is positioning herself to be Cedar Rapids Mayor Ron Corbett's running mate for the 2018 governor's race.

UPDATE: I had forgotten that Branstad admitted during a deposition last year to using a Blackberry. More details on that are below. I am seeking further comment on whether the governor receives work-related or private messages from people on that Blackberry.

DECEMBER 21 UPDATE: Hammes was quick to respond to my first questions on this topic last week, but four days since I followed up with a question about the Blackberry, still radio silence from the governor's office.

Jason Clayworth reported for the Des Moines Register on March 24 about Branstad's deposition in November 2014. He is a named defendant in former Iowa Workers Compensation Commissioner Chris Godfrey's lawsuit against the state. (Bonus Iowa politics trivia: Godfrey's attorney Roxanne Conlin was the Democratic nominee for governor in 1982, the first year Branstad was elected to that office.) Highlights from Clayworth's report:

The governor reiterated that during a Nov. 26 court deposition released publicly last week, telling Des Moines attorney Roxanne Conlin that he used neither email or a smartphone. Brenna Findley, the governor's staff attorney, advised against such communications "because somebody might send me an email that says something derogatory or inflammatory, and I didn't want that attributed to me," Branstad said.

But several hours and more than 250 pages into the 441-page deposition, the governor acknowledged he does receive a daily summary on his phone of news stories compiled by his staff. That comment generated more questions from Conlin, who noted the summary was an email. [...]

Branstad responded that his phone is equipped with a special software program that allows him to receive the news summary. The governor called the program an "app," but Centers said this week that it is a Web-based email account that only he and the governor can access.

The Register is seeking copies of the account's contents in an open records request. However, because it is a private account, the state's information technology staff cannot conduct a forensic search that has sometimes been used to resurrect deleted state emails.

Retention and unfiltered email retrievals of state-issued email accounts are some of the key reasons that Branstad, through Centers, this month discouraged other government employees' use of private accounts to conduct government business. That criticism surfaced following the national flap over Hillary Clinton's use of private emails in her role as the former U.S. Secretary of State.