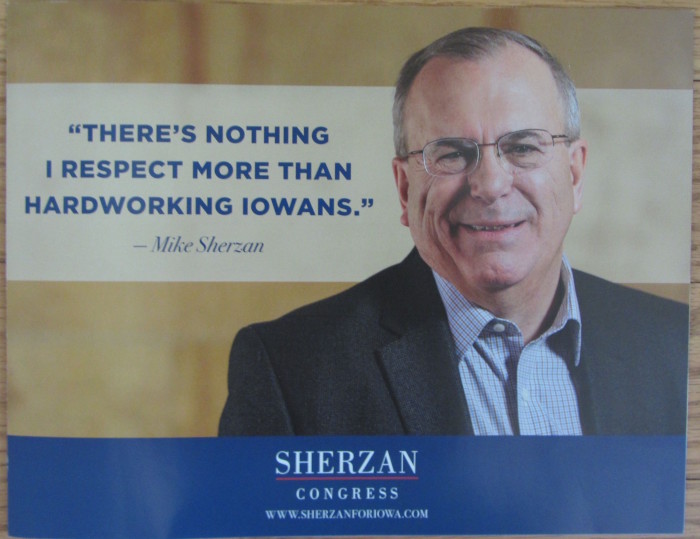 IA-03: Mike Sherzan promises to be "a voice for hardworking families"

The first direct mail piece on behalf of a Democratic candidate in Iowa's third Congressional district hit our mailbox yesterday. Mike Sherzan's mailer incorporated several messages tested in an internal poll a few weeks ago, regarding Sherzan's working-class family background, respect for hard work, and fair treatment of employees, including "equal pay and equal opportunity" for women. Follow me after the jump for photos and the text.

Any comments about the IA-03 race are welcome in this thread. The winner of the June 7 primary will take on first-term Representative David Young in a district with an even partisan voting index. The latest figures from the Iowa Secretary of State's office indicate that the sixteen counties in central and southwest Iowa contain 158,291 active registered Democrats, 170,361 Republicans, and 152,430 no-party voters.

Since the text on these pictures may be too small to read on some devices, these words appear on the front page of the mailer:

Call me old-fashioned, but I believe in treating others as I would want to be treated.

MY PARENTS CAME FROM WORKING-CLASS FAMILIES and spent their lives building a better future for my siblings and me. They made sure we understood the value of hard work and raised us to do what's right. To me, that means treating people with the respect they've earned.

AT MY COMPANY, I PUT MY EMPLOYEES AHEAD OF PROFITS. People who work hard should share the reward. Unlike most of the businesses in my industry, I made my employees part owners by giving them stock every years, and shared my profit by making annual contributions to every employee's retirement account, on top of their 401(k) benefits.

WHEN IT CAME TIME TO RETIRE, I TURNED DOWN NATIONAL OFFERS AND AM SELLING THE COMPANY TO MY EMPLOYEES. It wouldn't have been right to sell out to Wall Street. We built the company in Iowa, and I wanted it to stay here.

GIVING WOMEN EQUAL PAY AND EQUAL OPPORTUNITY WAS NEVER A QUESTION FOR ME--IT WAS A GIVEN. At my company, women were paid the same as men for doing the same job, and were promoted to the highest levels in the company because they earned it. Every good worker deserves equal pay and equal opportunity; it's that simple.

I'LL BE A VOICE FOR HARDWORKING FAMILIES IN CONGRESS.

(under family photo) Mike and his wife, Susan, have been married for 38 years. They have three children and six grandchildren.

"I'll bring respect for hard work back to Congress."

AS A BUSINESSMAN, I built a company that paid equal wages and created employee-owners because treating people as you would want to be treated is the right thing to do. In congress, I'll take the same approach: